As I'm sure you're aware by now, I've been working on getting ready to play Chain of Command.  My chosen theatre is North Africa.  It's a part of the Second World War that has become more popular in recent years.  I think the latest edition of Flames of War might have something to do with it.  That and Warlord Games' recent releases of their own 28mm ranges for the Desert War. 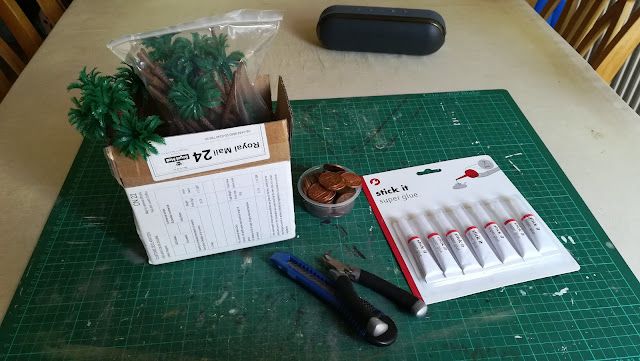 My own claim to fame though is that I decided to go for this period a number of years ago when the excellent Perry Twins released their plastic boxes.  I was sold on the period from that point on.

Of course, it's also a wonderful part of the war to focus on.  There are no SS units in the theatre.  And there's a sense that is was a much more gentlemanly affair, if for no other reason than both sides had a common enemy: the desert itself.  Of course, getting to this point has been a long journey, a journey made all the longer by a lack of funds and opportunity to build appropriate terrain.  But the good news is that I'm nearing completion of this project, and you have no idea how wonderful it is for me to be able to say that.

Gaming in North Africa means that I need to get myself a set of palm trees.  Now, I've looked online and seen the wonderful How To tutorials that are out there.  You can make some truly awesome models following the methods they show you.  But, like with the painting of my miniatures, that's something that needs to be done in a much shorter time frame.  I looked online for other options.  Pegasus Hobbies make a set.  Very nice, but not much for your money.

And then I stumbled on a supplier from China.  14cm tall Palm Trees.  Forty of them for a little over ten pounds. Post free. Frankly, I couldn't believe it. Then I decided it must be a hoax. And then I decided to take a chance. And I wasn't in the slightest bit disappointed!

In fact, the only downside I can find to doing this is recognising that you have to be prepared to wait for delivery. And if you're okay with a month's wait then I genuinely can't see how you can go wrong.

Now, when they arrived, they were, as I expected, rather obviously plastic and not the correct colour. But that' not a problem.  All they need is some paint.  And if you want to make sure that the paint will stick to them, best use a spray can.

I ordered two from a seller on eBay.  I got an Ivory colour for the trunks, and Nato Green (?!) for the palm leaves.  I was able to get them both for a little over seven quid.  All I had to do was get them ready for spraying.

I wanted to attach the trees to individual bases.  I didn't want to create multi-based clumps, because I wanted to have the freedom to decide where to put them on any given setup.  I didn't want the bases too wide so I could clump them if needed, or spread them out as I may want.  So the question was one of weight.  A small base with a bit of a weight to it will keep the trees in place while gaming.  Now, my deciduous trees are all individually based on washers.  This was a good idea, because again, it allowed them to be placed wherever I wanted on a board layout.  And, admittedly, they are all a lot wider than my palm trees.

So I had a look at the price of washers, and realised that providing this kind of base for forty trees wasn't going to be the cheapest option.  Thankfully it was at this point that I realised I had a stash of 2p coins.  And that was my problem solved.

Now, these palm trees have two pegs attached to them.  A thin one on the top to which the leaves are attached, and a wider one at the bottom to aid with pushing these into the baseboard of your layout.  It's a great idea, but not much use if you want to move them about as I do.

So the first job was to cut off the wide peg at the bottom of the trees.  I used my model clippers to do this.  And I used the box the trees came in as my target for the pieces as I cut them off, as they seemed to have the desire to ping off at an alarming speed.  With all of the large pegs removed, I then set about using my scalpel to make sure the bottom of the trees were as level as possible.

Of course, it's much easier to cut off the large pegs if you take off the palm leaves first.  (You do then have to make sure that you cut off the right peg!)  It was at this point that I encountered a problem.  I had been banking on the palm leaves being a single piece of plastic.  That would indeed help in spraying them later on.  However, this was not the case with the palm trees I had purchased.  They all have a number of rings that sit on top of each other.  When I received the trees these were all on so tight that I though they were a single piece.  In reality, there were either four or in some cases five rings of leaves on each tree.  I'll explain how I overcame this later.

Anyway, back to the trunks.  With the bases cut flat, it was time to stick them to the 2p pieces.  I used superglue for this, and it did a perfectly good job.  You'll see from the first photo in this post that I used a pack of glue that I got from Poundland, you know, for a pound.  I find it works just great, especially for fixing your base mix to your models.  If you've got the cash, I reckon that a good old two part epoxy glue such as Araldite would be even better for this job.  But it would take longer to stick everything in place as you'd need to hold each trunk in place for longer.  Anyhoo, when all forty were glued in place, they looked like this... 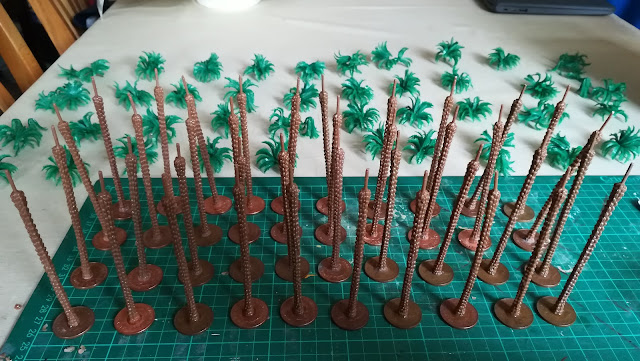 I then took them outside and put them into my hugely expensive, custom built spray booth and... oh, alright, it's a cardboard box.  Works just as good as anything else, let me tell you.  Now with all of that spray paint about, I didn't take any photos.

I left the trunks to dry for a couple of hours.  The can says the paint is touch dry in about 15 minutes, but is best left 24 hours to be completely dry.  But I needed a way to spray paint the palm leaves in place.  This isn't an easy thing when they come in different rings.  So I decided to be clever and attach them to their respective trees.  I made a deliberate point of leaving a good few millimetres between each 'ring'.  This gave a much nicer look to the trees.  I then took them out to my spray booth and clumped them together,  Not so much that the leaves were all touching, but close enough to make sure that they protected the already painted trunks beneath.  It was then a case of gently applying the Nato Green in short bursts around the edge of the clump of trees at roughly a 30 degree angle.  By gently rotating the spray booth, I was able to alter the angle of the spray can by a few degrees.  You don't want to be heavy handed with the paint.  You're looking to subtly alter the colour of the leaves and allow the paint to create different shades.

Here's a few photos of the end result... 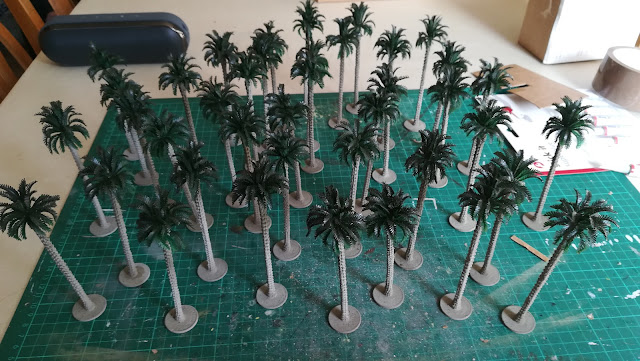 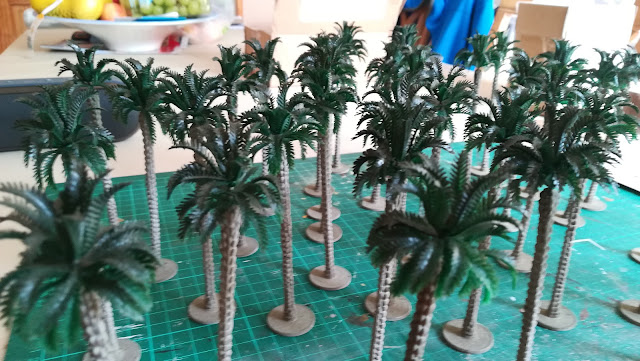 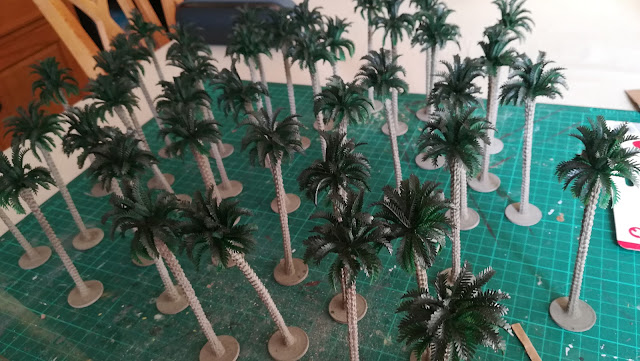 I then left these to dry.  I then applied a brown wash to the trunks, just to add a little definition.  And after that, I applied super glue to the bases and its edges and applied my desert basing mix.  This is the same stuff as I used on my desert boards which I talk about here.  After that I left them out overnight to make sure everything was dry before fitting them all into a single 9L Really Useful Box. 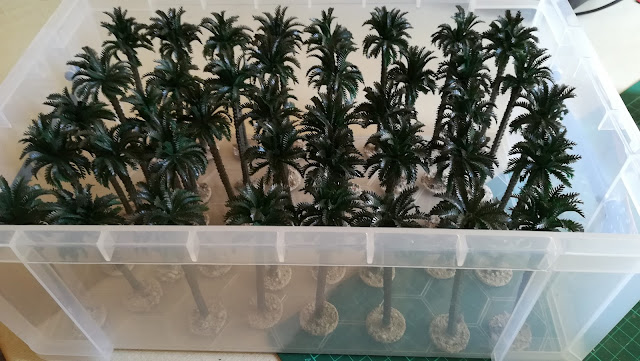 Here's another shot of the trees in the box so you can see a little more of the bases. 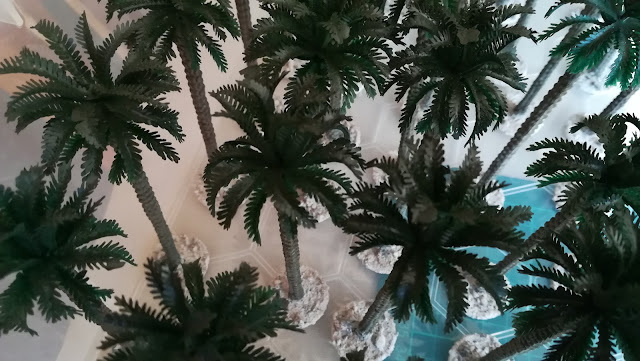 So there we go, a load of Palm Trees for a very small price.  I can't wait to be able to bring them to the gaming table!