North Africa 1941.  The Sudan.  Afghanistan.  Heck, some post-apocalypse gaming (quite probably with giant worms!) All these settings require an appropriate ground covering to make them possible.  And desert boards are something I've long wished to have, but never been able to get round to for one reason or another.

Of course, the real question was all about how to make this happen.  I spoke about a gaming mat in a recent post.  But I decided against that.  Much as I wanted to have a go I was worried about the longevity of such an option.  I'd go for a gaming mat as many people tend to do so these days.  The appeal is very clear to me.  They don't take up a lot of space compared to modular gaming boards (which are my wont) and they are easy to set up.

But personally, I don't like the lack of texture on them. Or the sheen that some have.  And being an adopted grippy Aberdonian, I didn't want to risk it.

So instead I decided to have a go at making one with some black cloth and applying flocks.  I'd seen this work to great effect at Deep Fried Lard last year.  And I was all set on that idea.  Or at least i was until I took out my Hexon boards for a game of Zombie Golf.   It was then I remembered how versatile these things are.  How durable they are.  How they don't warp (unlike so many of my beloved modular boards...)  How easy it is to set up exactly the kind of setup you need.  How easy it is to configure them in a seemingly infinite number of ways.  Like this... 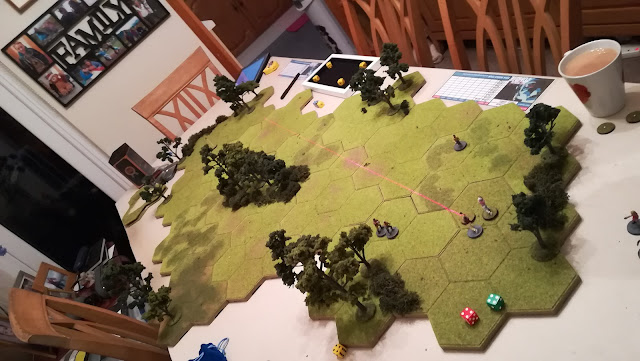 And that was my mind made up.

And then something magical happened.  I ordered a box of them.  Twenty-one boards in total.  Just like that.  Now, I know that's not a biggie to many people, but those of you who follow this blog will know that things have been incredibly hard for a number of years.  Spending this amount of money would not have been possible a year ago.

So you can imagine the delight I had when the box appeared in the post a few days later.

Of course, this was followed by the customary childlike delight and the incredible joy of opening the box to stare at the loveliness contained within.

Which in turn was followed by a period of not wanting to rush ahead and do something in case I ruined them.  Being really busy with my work acted as the perfect excuse for this inactivity.

But then, I got some time this last weekend to make everything happen.  And i can't even begin to describe how happy I was!  Look, even Spongebob was back out ready for some serious hobbying! 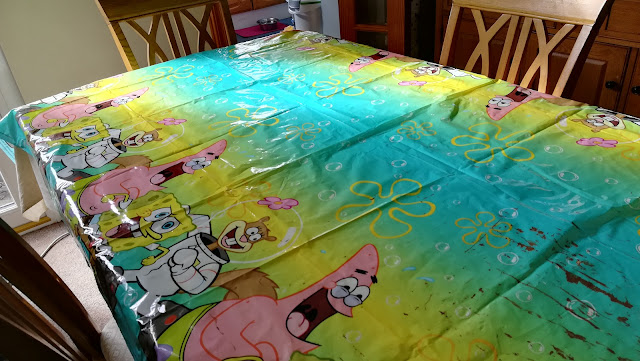 Now, the method I'm using isn't my own.  It comes from the excellent Luke at Luke's APS.  You can see it all at work here:

Such an awesome thing, you can see why I wanted to give it a go.

I'm using Sharp Sand as my sand base.  I know Luke talks about using Kiln Dried Sand, but I wanted some of the larger stones that you get in Sharp Sand.  I wanted them to appear randomly on the bases rather than add them afterwards.  I got a great big bag of the stuff from B&Q for £1.93.  The tile grout is Ivory and cost £7.50.  I should add that the Sharp sand was a bit damp in the bag.  Thankfully my wife came to the rescue with an old margarine tub.  I moved a good few handfuls of the sand into it and left it to dry out over a few days.  Damp sand and tile grout powder don't go together too well! 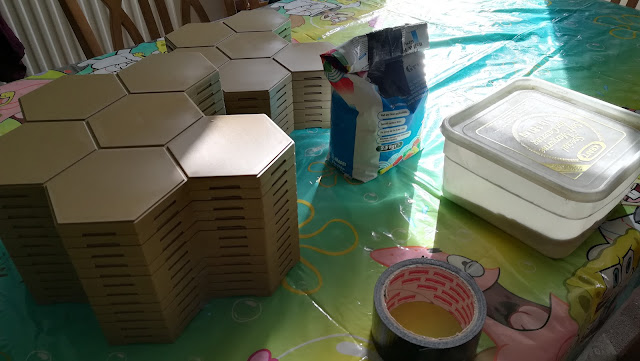 Things were shaping up for a lot of fun.

Just to clarify, the mix I'm using is approximately two thirds sharp sand to one third ivory tile grout.  I'm going to be sticking it down with PVA.  When that's dry, I'll spray it with some scenic cement from Woodland Scenics. That's it. No painting required whatsoever. 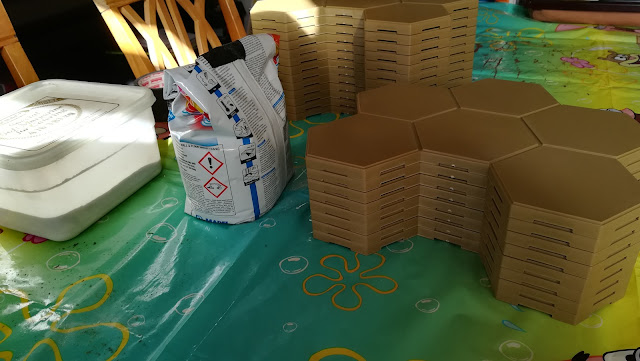 Now, things do get a little messy when you're doing this.  As a result I wasn't going anywhere near my camera with grout and sand all over my hands. Whilst this means there aren't any photos of the production, here's a few thing I learned.

Firstly, you really do need somewhere to pour off the excess base mix.  I thought I could put this straight back into that large margarine tub .  I soon learned that I couldn't.  It simply wasn't big enough. The mix went all over the place.  Thankfully my wonderful wife came to the rescue with a large lipped tray.  Honestly, I'd be lost without her.

B, I needed more space.  Yes, they'd all fit on the table when they were finished.  But that included the space I was using to work at.  This meant a relocation to the adjoining kitchen to finish off.  A bit of careful planning would have been rather useful here. Sigh.

3. The mix really does go a long way.  I was impressed by how much I had left over.  So you don't need to make huge loads of the stuff.  I've still got plenty left for the bases.  And I've hardly touched the grout, let along that massive bag of Sharp Sand.

Anyhoo, here's the boards sitting out to dry off after the mix has been applied. 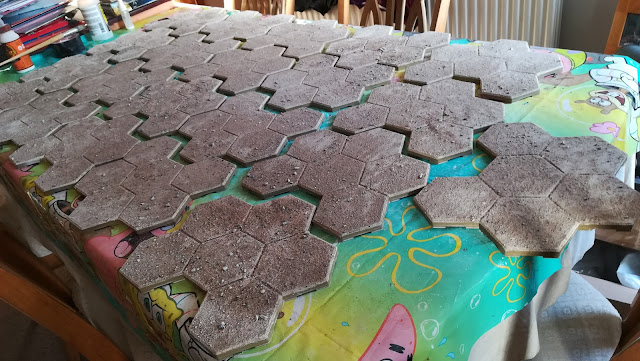 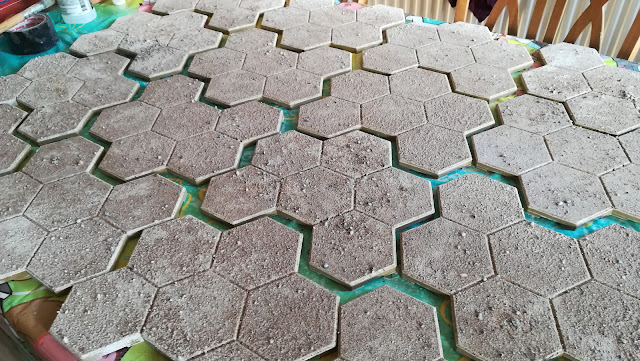 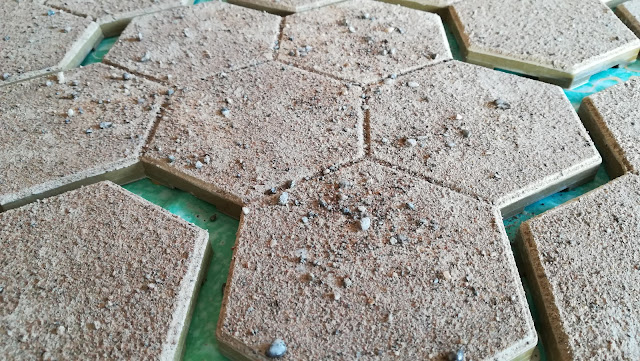 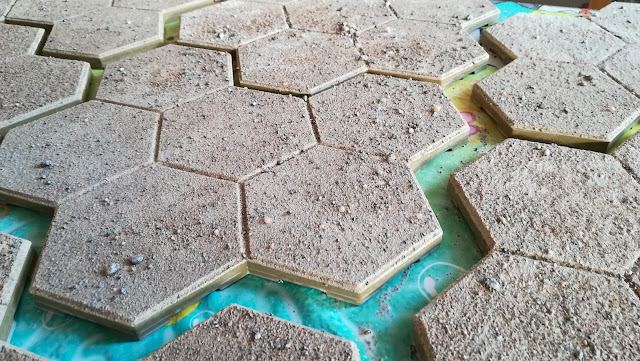 Once everything had dried, I then applied a spray of Woodland Scenics Scenic Cement over the top.  I'm sure some watered down PVA with a little drop of washing up liquid would be just as good, but I like the fact that the Scenic Cement is guaranteed to dry with a matt finish. 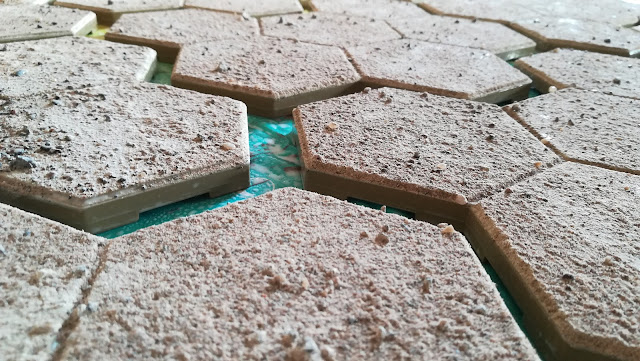 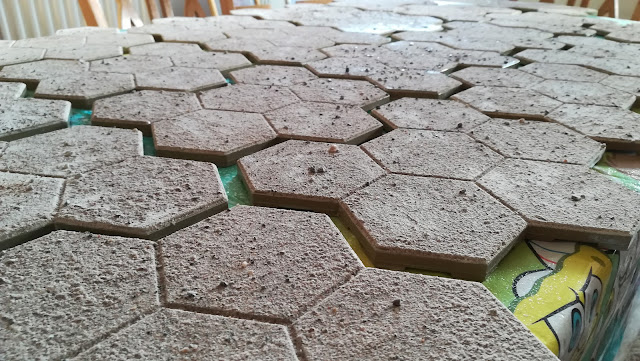 I left them overnight to dry. This is how they looked the following morning. 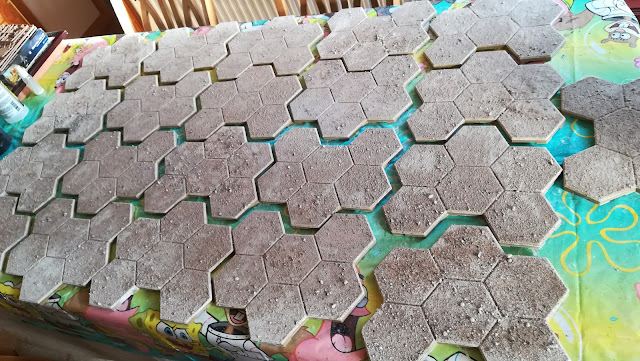 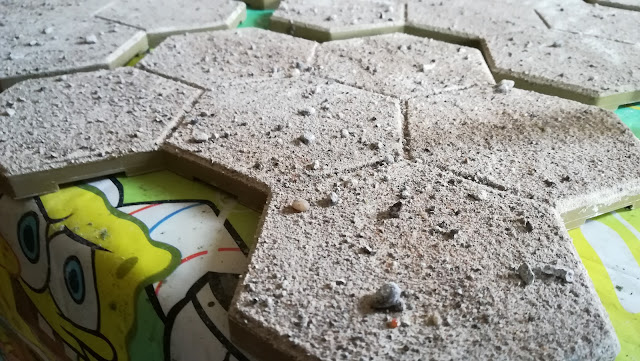 I then set about adding some tufts here and there.  I'm a firm believer in the less is more approach. 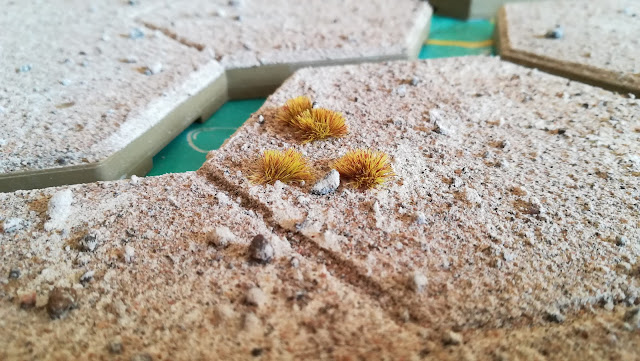 Hexon boards are great because they fit together with a 5mm gap between them save for round the edges.  It means that some 4mm tufts are the perfect height.  And they look just as good with 15mm models as they do with 28mm.  So it;s a win, win situation. 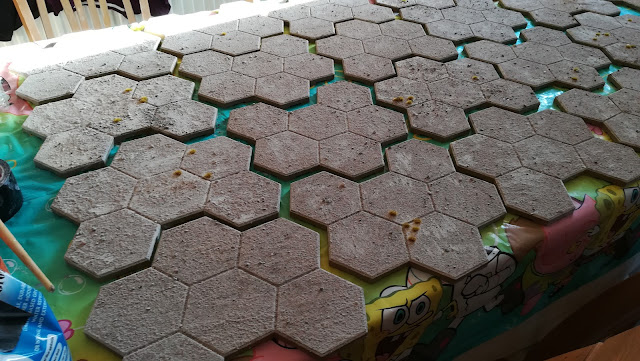 I'm sure you'll agree that they look absolutely fantastic.  And they're all ready in just a few hours of work.  No painting required whatsoever.  It doesn't get much better than this. 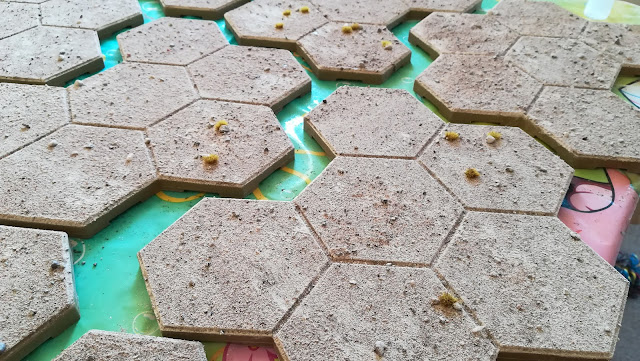 Now if you'll excuse me, I've got a load of British 8th Army figures to make for a certain game of Chain of Command...