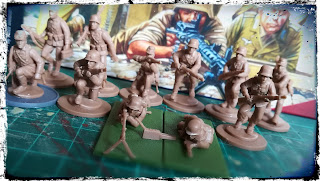 I'm using a single box of Perry Miniatures to build my 1941 Schutzen Platoon for Chain of Command.  I showed in this earlier post that you can build a platoon out of a single box. I still stand by that post in terms of the numbers of figures in the box. You definitely have enough figures, and enough MG-34's to follow the list from the Too Fat Lardies.

You get three frames of twelve figures in the box. But there's a small problem. You have more MP-40's than you need. And this sadly means that you don't have enough rifles. In fact, you're one short per frame. I hadn't realised this when I began assembling my models. So when it comes to making your last Rifleman, you'll end up with a problem that looks like this... 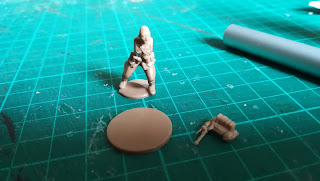 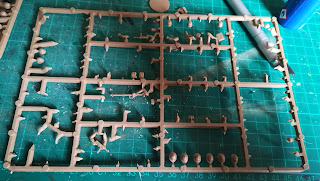 Of course, I solved this by taking a rifle from the next frame. This is not ideal as it has a knock on effect for the next squad.

So, simply put, a single box of the excellent Perry Miniatures Deutsche Afrikakorps will give you enough men to build your platoon, but you'll be short of three rifles.

This isn't a problem for me as I've ordered another 12 man sprue from Second City Games on eBay. I suggested this as one possible option to allow you to make use of the support options in the box. This should give me enough spare rifles and enough miniatures to make the Anti-Tank Rifle and 5cm Mortar team. It will also give me a number of figures to adorn my Jump Off Points. Admittedly though a few more of them will have MP-40's than I originally thought...