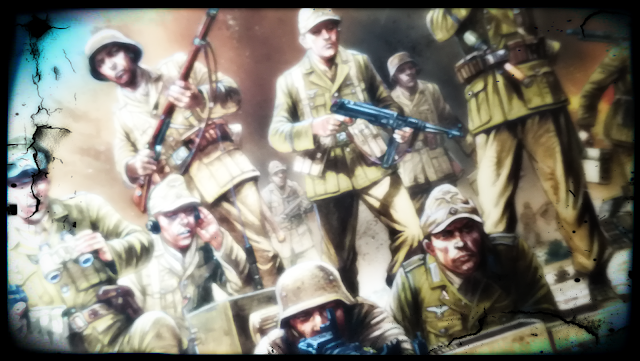 Well, the summer has begun and I'm really excited to be beginning work on my North Africa project for Chain of Command by Too Fat Lardies.

Thi is something I've been wanting to do for a long time now.  To actually be able to get started is incredibly exciting.  Like all wargamers, it's not like I've completed every other project on my list.  And like most wargamers, there are probably many reasons why we jump from one project to another.  So what's my excuse?

I've admired Chain of Command since it first came out.  At the time of its release, things were incredibly tight for us as a family.  I couldn't afford it.  I was blessed to get a box of Perry Miniature's British 8th Army and Afrikakorps on two successive birthdays.  Of course, if you're doing all this properly, you need to have the right scenery.  I didn't have any.  And because I like to make sure the bases of my models are based according to the boards they'll be played on, that was a problem in itself.  I had no boards.  The scenery wasn't going to be a problem.  I can happily scratch build that until the cows come home.

I will remain forever grateful to John, Andy and Tom at Dep Fried Lard who led me through my first game of Chain of Command.  I had only been able to purchase the PDF of the rules a few weeks before.  John put on a wonderful game.  To say I was hooked was an understatement.  Before that game, I had played a brilliant variant of Sharp Practice in Afghanistan.  The cloth mat they used was homemade and looked wonderful.  In one day of brilliant gaming, I had experienced the joy of Chain of Command and realised it wasn't going to cost an arm and a leg to make my own cloth mat for desert terrain.

Of course, there was another problem that had held me back for a long time.  Lots of people were talking about the army list and whether or not it was right to give the DAK two LMG teams per squad.  Now, I'm not enough of an expert on this one, so don't shoot me down.  I'm a simple trusting soul.  And as far as I'm concerned, if Richard and Nick reckon that's how it goes in their army list, then that's good enough for me.

Oh, but there's another problem.  Apparently, you don't get enough figures for MG-34's in the Perry Box to make a Schutzen Platoon for Chain of Command.  I've seen the posts.  There are many.  And for an impressionable soul like myself, well, it's enough to make you shy away from the trouble and wait for the dust to blow over and settle down again.

How wrong I was.

Why?  Because it's piffle.  I honestly don't know where they get the idea from.

Unless they are basing their whole argument on the leaflet that comes in the box? 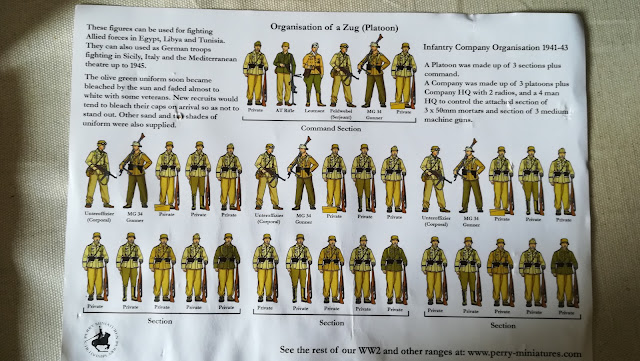 As you can see, it shows a Zug.  A Zug with three sections.  Each section has a single MG-34 in it.  The command section, however, has an MG-34 in it.  Which means there must be components on the frames for four at least.  Now, I know that's not six.  I can do the math.  But when you look at the sprue, you should notice something important.

Do you see them? 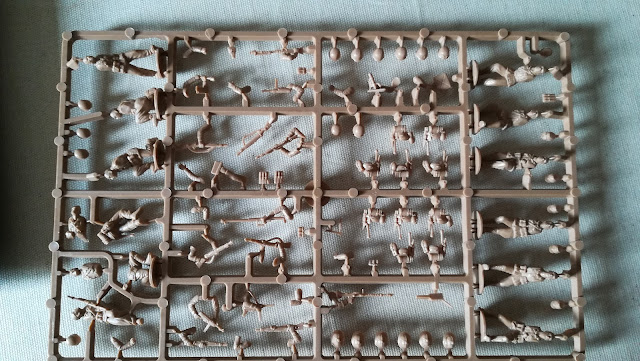 Let me point them out. 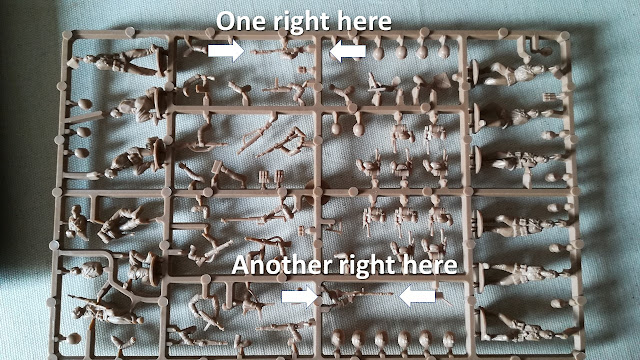 Oh, you say, but there are only ten men in each section in the illustration. That's six models short!

Yes, I respond.  But there's a whole command section at the top and you only need one of them as your Leutnant.

But that still leaves you one short, comes the cry.  And yes, I'd have to give it to you.  If you used the illustration on the leaflet as your guide for what you can make, you would indeed be short of models.  But the illustration gives you a total of 36 models.  Yet there are 38 in the box! Yes, there's a command frame with two models on it.  One is your Leutnant.  The other is a radio operator which is not in the illustration.  At all.  (And by the way, this gives you your Forward Observer with the off-table 81mm mortar battery List 4 Support Option).  Now as far as I recall, 5+1=6. Which means you're not short at all.

All of which goes to prove that yes, you do have enough figures in one box of Perry Miniatures' Afrikakorps for a Schutzen Platoon in Chain of Command!

The box of miniatures has the option to build a Pz.B.39 Anti-Tank Rifle and a two-man team for a Le.Grw36 50mm Mortar team.  Both are great support options.  If you want to make these, you're not going to have enough figures for your platoon.

But it's not a big problem.

The way I figure it, there are two simple choices.

Option 1: GWW18.
This box of six metal miniatures gives you two two-man LMG teams and two NCOs.  This frees up six models from the plastics box.  Two of those can allow you to make the Anti-Tank Rifle.  Three more will allow you to make the proper three-man crew for the mortar team.  All you need to do is allocate enough lying down models for both of these teams. This leaves you with a spare upright model.  That's an additional Senior Leader right there from your List Two Support.  Oh, but he hasn't got a pistol holster on him?  Probably not.  But there's a spare one on the 12 man frame.  So what's the problem?

Option 2: Another 12 man sprue.
You can get one of these on eBay for less than the cost of the metal pack.  This way gives you a total of four 2-man teams lying down.  Use two as your LMG MG-34's.  Your other two give you your Anti-Tank Rifle and your mortar team.  Don't forget to make another model as a rifleman to bring your mortar team up to the full quota.  This way you'll have two firing MG-34 teams and four mobile teams.  As with option 1, you'll be able to make the second Senior Leader.  And you'll have another six models available to festoon your Jump Off points.  That's what I plan to do with them anyway...

So, to conclude, yes, you have enough models in a box of Perry Miniatures' Afrikakorps to build a full Schutzen Platoon for Chain of Command.  And for less than a tenner, you can max them out to make use of some support option in the box.

What's not to love?

Now if you'll excuse me, I'm off to start making my men... 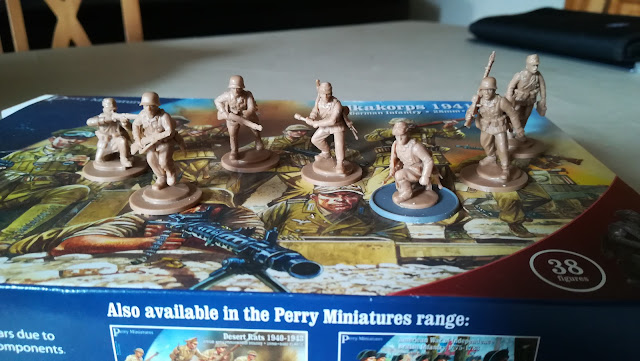