Preparing for the Pas de Charge 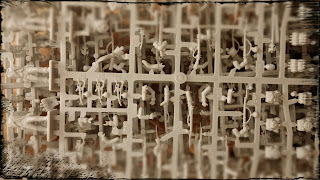 Okay, so I haven't had a lot of time for doing my hobby in the last fortnight, but it has been a time with a lot of thinking.  The upshot of this is my decision that it's high time to get on with all things Napoleonic for Sharp Practice. The original one, that is. Not the spangly new set everyone is talking about.  I've had the rules for years and never plucked up the courage to start making and painting the miniatures.

But that has now changed.  I looked out my French Napoleonic Infantry 1807-12 from Victrix and began figuring out how I can make the 60 models in the box.  There's the option to make up to 16 of the models as Voltigeurs and/or Grenadiers.  So I quickly decided that I would make a group of eight of each.  Beginning with the Grenadiers.   So I set to work following the wonderful little instructions in the box (thanks Victrix!)

I really enjoyed the task, although it took a lot of time as I went finding all the correct bits, trimming off the flash and checking the poses.  I decided I wanted the Grenadiers to look firm and resolute, so I chose some firing, standing and loading positions.  I'll save the muskets at the trail for the Voltigeurs, owing that they are the more athletic of the two. 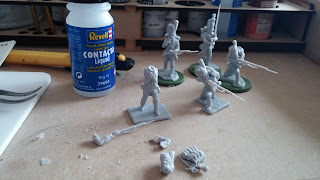 The models come attached to some quite substantial bases.  As I'm individually basing my models on 25mm diameter plastic bases from Renedra, their integral bases needed clipping back.  As you can see in the next photo, it makes the bases look a little ugly. 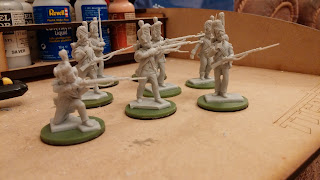 Then I realised that I had almost run out of my circular magnetic sheet.  So I quickly put in an order for some more. They'll be coming in rather handy in the coming weeks, I can tell you!

Anyhoo, not to be put off, I looked out my PVA and my base /rubble mix and set to work texturing the bases and tidying them up in the process.  Personally I think the grenadiers are looking ready for whatever Richard Sharpe may throw at them.  I hope they're made of stern stuff! 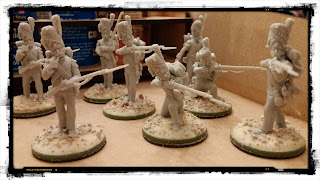