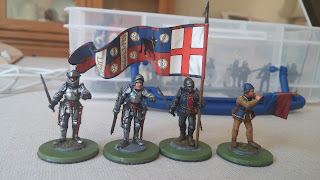 I've been a fan of Daniel Mersey's Lion Rampant ever since I got my hands on a copy on the day of release.  I had become a fan of his approach to rule design when I read his Dux Bellorum set which kickstarted the whole Osprey War-games thing a couple of years ago.  Since then I've progressed to his Song of Arthur and Merlin, and am eagerly awaiting the arrival of Dragon Rampant, The Men who Would Be Kings and The Pikemen's Lament. 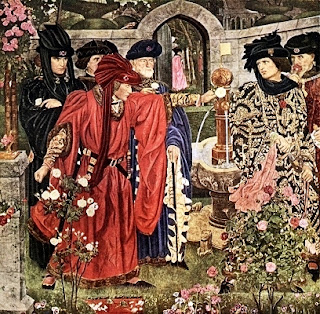 Which has finally compelled me to get gaming with Lion Rampant at long last!  I've been boring my friends witless whilst waxing lyrical about these rules.  And even though it has not convinced any of them to actually paint any miniatures, I've decided to take the plunge into the latter half of the fifteenth century.  You see, I've always wanted to wargame the Wars of the Roses. You can blame Bill Rattledagger. You can blame Richard III (and why not, everybody else did!). But most of all you can probably blame Warwick the Kingmaker. So, after thirty odd years of wargaming and not playing one single medieval game, it's time to get this one ready to play for the new year.
I purchased Perry Miniature's War of the Roses Infantry 1455-1487 when they were released. (Can you see a recurring trend, by any chance?) I actually started assembling and basing a few of them for DBA.  But I lost the will with it.  I think this was because the army was looking too small.  This of course compelled me to search through various other rule sets to look for a more visually appealing option.  DBM was quickly rejected because it needed too many figures.  I purchased Field of Glory and its supplement Storm of Arrows.  But that ruleset looks like it takes a day to play out.  Not much use for me there, so I went for Terry Gore's Medieval Warfare published by War-games Foundry.  I love this set of rules.  But painting two large very similar armies became a difficult prospect.  yes, that's right.  The very thing I wanted, large armies, became the very thing that made me put the breaks on this project. 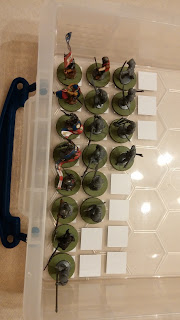 Which is why I was so stoked to get Lion Rampant.  And here, after building a Wild West town for The Rules with No Name, and the modern city for All Things Zombie, I'm returning to the medieval period to fulfil a long ambition of mine: The Wars of the Roses. 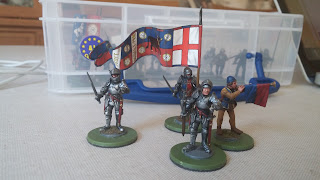 This, of course, involved taking my models off their long strips they had been standing on awaiting action.  My figures are now mounted on individual 25mm circular bases.  I intend to purchase some mdf movement trays from Warbases.co.uk in the future.  My cunning plan is to eventually have enough figures for playing Terry Gore's rules as well.

There's still an awful long way to go, but I'm delighted to be working with these excellent miniatures and realising a long ambition of mine in the process.