Basing (Or Going Round in Circles)

Time to share a new discovery that I've found has helped to solve an old problem we wargamers face on a regular basis. One we often go round and round about in ever decreasing circles.  Or at least you do if you're anything like me.  I'm not alone in this madness, am I?

I'm talking about storage, that perennial problem of what to do with all the lovely painted miniatures we possess. 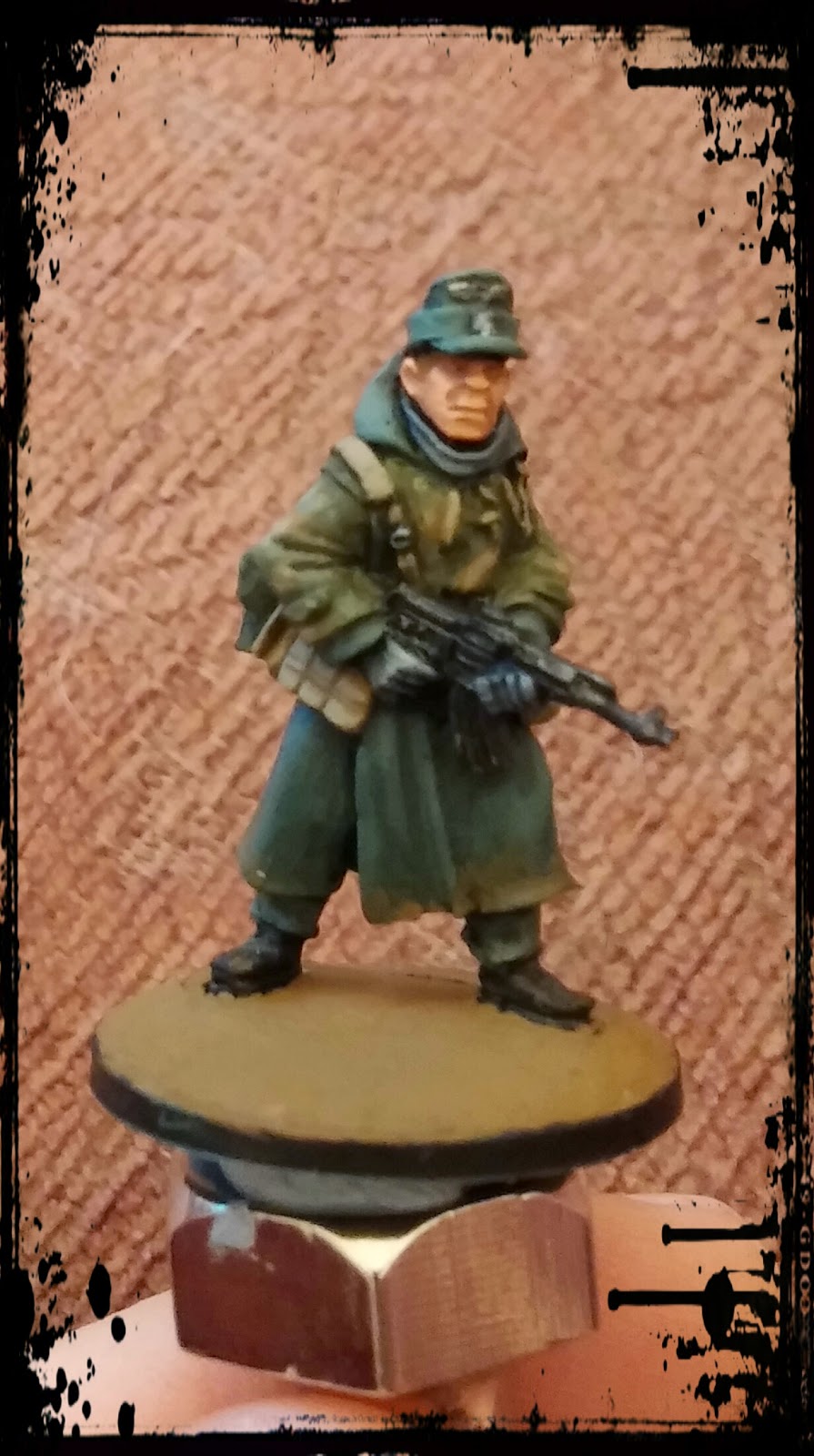 It's a serious issue, I promise you.  On many an occasion it has led to inactivity on my part and meant that months pass without new miniatures being painted. Possibly because I over-complicate things.  But also because of the conundrums that appear all over the place in our hobby.

You see, it's not just about deciding which miniatures to buy.  Oh, no.  That's where the problem begins, not where it ends.  You need to find the rule set you like most.  And that hurdle can happen a long time before you even commit to deciding which miniatures to buy.  And then you need to find out how many figures you actually need to buy.  And if its a new period for your gaming community, you may well need two armies. 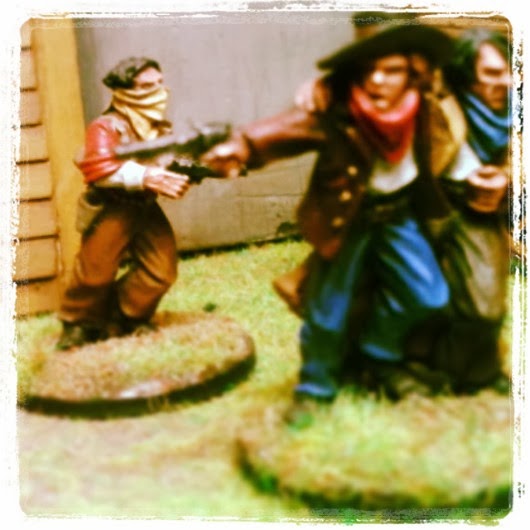 So assuming you have gotten that far and have boxes of minis and the perfect rulebook to boot, (let's skip the whole search for authentic colour schemes, heraldry, uniform guides, paint manufacturers and so on), you then face the next problem.

Where to put them.

I'm not talking about those blessed with large gaming rooms filled with so much cabinet space you'd take a dozen lifetimes to paint and fill them.  No, I'm talking about those of us in the real world.  Gamers who gather at one person's house (usually mine) to play any number of historical, fantasy or sci-fi milieus.  Gamers who have multiple armies and an ever decreasing space in which to put them. Let alone find space for all the necessary scenery needed to play with.

I'm of that generation (I'm in my prime!) that remembers well the armies carried to gaming conventions in metal tool boxes.  I even have one myself somewhere.  Although its that old I dread to think how badly painted the contents are.  They were easy to use because you simply purchased some magnetic strip and applied it to the base of the miniatures.  But I have no idea where to find them nowadays...

I've tried other options.  Ferrero Rocher plastic boxes.  Great for anything upto 15mm and not mounted.  Box files.  Great once the Pinging-Clasp-of-Doom has been removed.  Or, until you stack too many little lead men into each box and leave them stacked one on top of another in your loft for years.  The consequences are too heartbreaking for me to relate...

And then of course there's that lovely stuff produced by Battlefoam, KR Multicase, Figures in Comfort and any others I have failed to mention.  Cases of great beauty.  And of great price.  A very great price.  Far greater than anything I can afford, I'm afraid!
But they don't exactly fit Rackham miniatures now do they?  No they don't.  Nor, it would appear, do they save you from having to take a scalpel to the so called precision designed foam inserts.  Because if it aint GW, Battlefront, Privateer Press or Wyrd minis, they generally don't do anything for the rest of us.  And foam storage sections attacked by a scalpel to fit someone's models aren't a pretty sight.  Believe you me, I've seen the results.  And heard the anguished cries from players who have had to cut through multiple layers to fit in their beloved miniature, only to find the resultant space makes the paintwork chip each time the model is moved.

So with all of that preamble behind us, here's what I've recently discovered...

I decided a while ago to invest in some of those Really Useful Boxes to store my minis in. In particular, I'm a fan of the 4L and 9L sized boxes. The former do almost everything, the latter for those pike armed or fantastical creatures that don't fit in the former. Best of all, they have the same footprint so they stack together really well.  Furthermore, I can arrange my figures with enough space between them to take them in and out easily. Which is great, because it means all those fantastic figures in dramatic poses are guaranteed to fit in nicely. 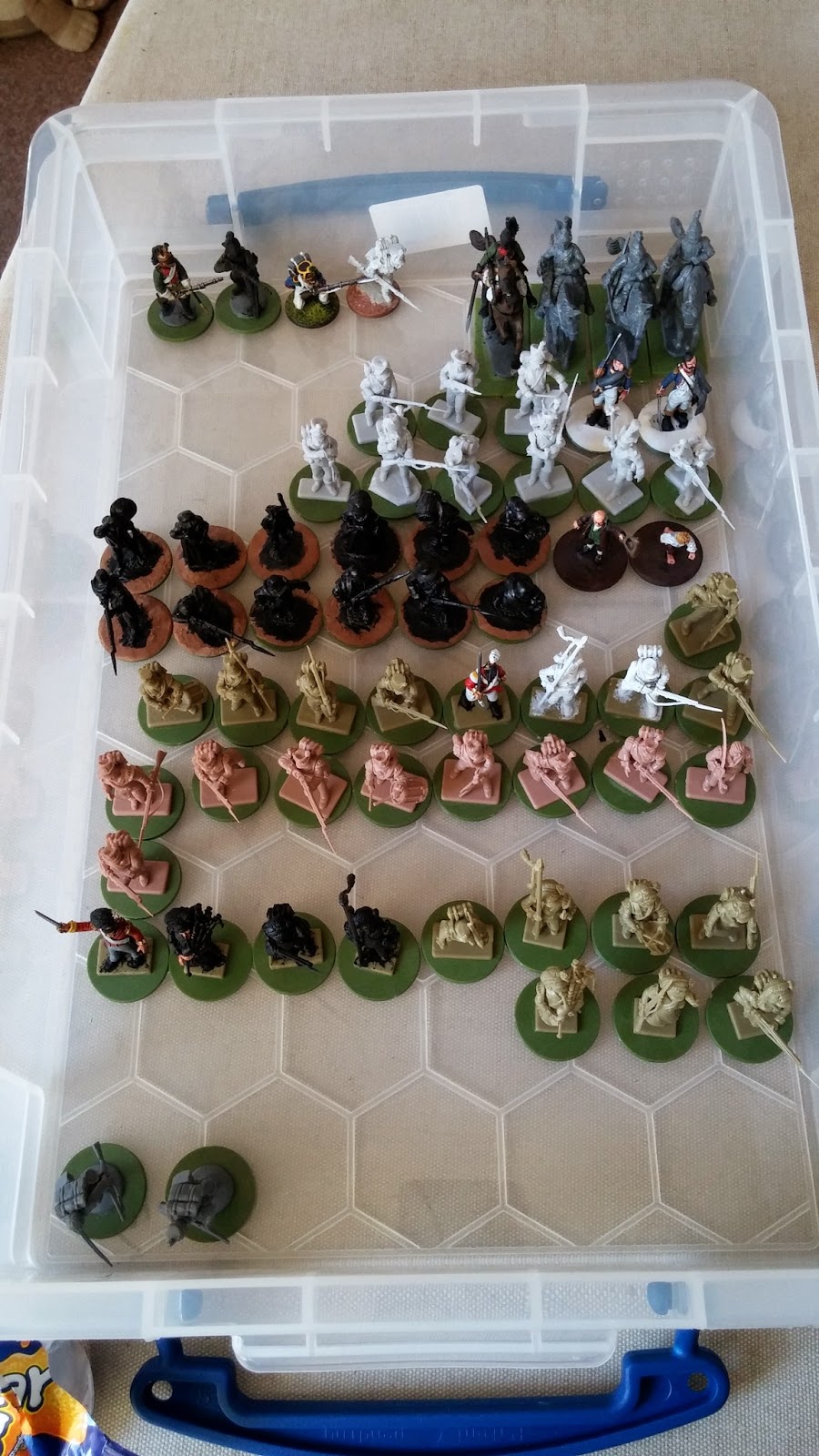 Until you pick up the box, that is.  Then they just slide about all over the place. Especially if your children decide to move them quickly. Which mine did once.  Catastrophe. (Except we have a dog...?)  Anyhoo...

I've been using magnetic tape and steel sheet to resolve this problem.  I purchased these a while back from Magnetic Displays, a company which I am glad to say has been trading and advertising in Wargaming magazines for...well...longer than I care to remember, to be perfectly honest.  And because I don't like really chunky bases on my models (mainly because it looks bad next to buildings and vehicles) I was sticking the steel sheet to the bases and the magnetic tape to the inside of my Really Useful Boxes. Which is perfectly logical, because putting it all over the outside would be just plain stupid.

This works wonders on individual or group bases which contain four right angles.  But not quite so well when it comes to circles.

Yup, most of my bases are round. Nothing wrong with that, of course. It's probably my favourite base shape, if I'm being completely honest.  At least it is until you try and magnetise the things..

You see, cutting circles is bloomin' difficult. Especially when it's in 20mm or 25mm diameter bases. I never get it right. It never matches. Call me pedantic (I've been called a lot worse!) But it never seems to work right.

I have on occasion attempted to use a round base as a template. This is a VERY BAD IDEA. You need a scalpel to cut the steel sheet. And scalpels play merry havoc with the edges of plastic and mdf bases. Let alone the nice fleshy ends of your fingers. I have the scars as proof. If you're thinking of having a go, DON'T!  If you do, you'll soon find the whole base is no longer recognisable as a circle, let alone the blood-soaked category-defying shape of the steel sheet you're left with underneath.  And don't even mention the amount of waste steel sheet, which of course is useless because its mostly in tiny shards.  So don't try it! You have been warned! 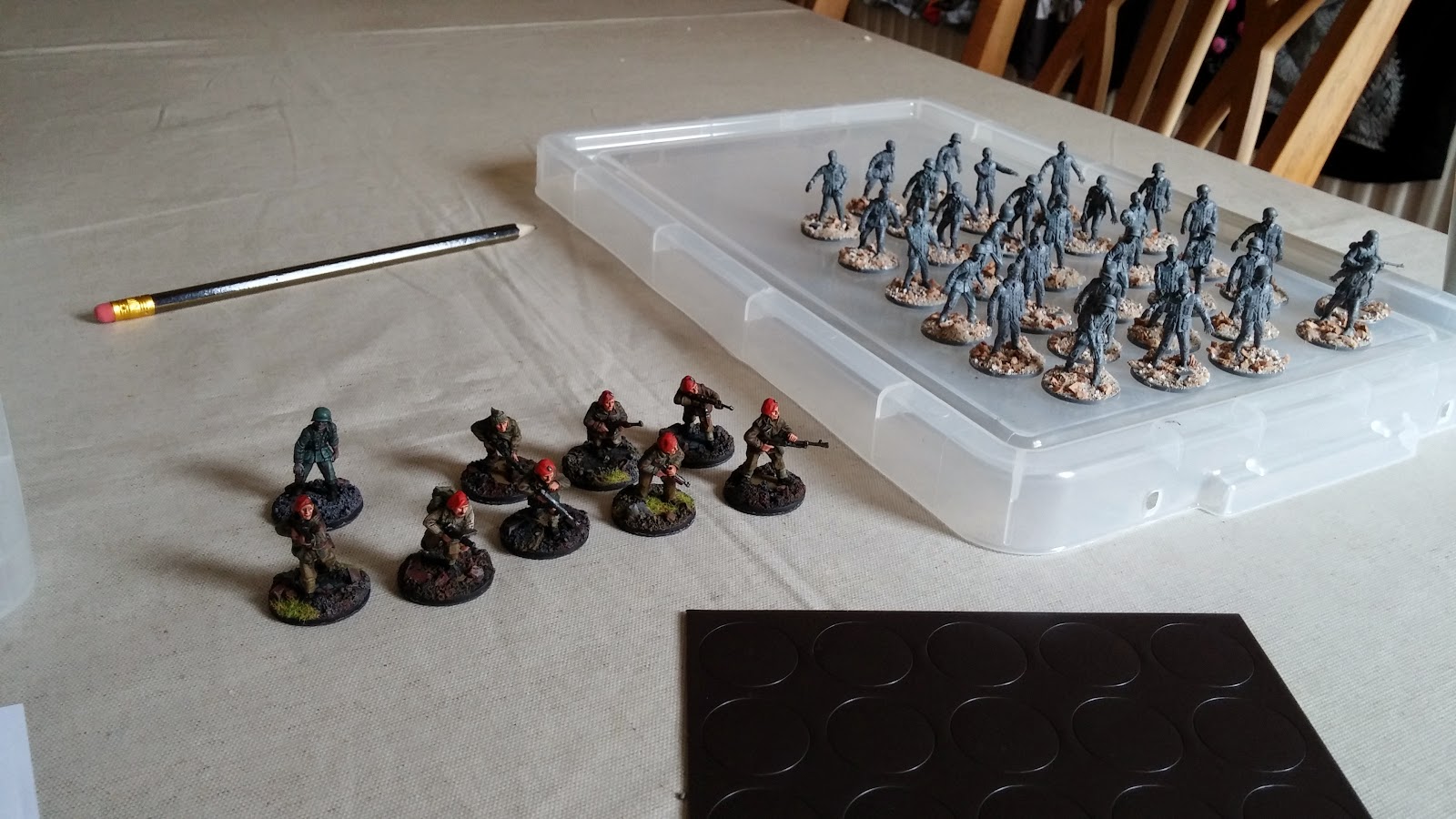 All this had me despairing, and my little soldiers ice skating around their Really Useful Boxes every time I moved them.  That was until I did a search recently on fleabay and came across a wonderful shop that sold magnetic sheets pre-cut into circles. Apparently they are made for crafty folks who make crafty things and desire to attach them to their fridges. What really impressed me was they sold them in 20mm and 25mm diameter sizes.  What clinched it for me was they were available in packs of 70 with a depth of 0.85mm for £3.95.  Post free. Now, I'm not sure what that is in American, but over this side of the pond, that's a fantastic price. The fact it was a buy one set get another free made it even better! 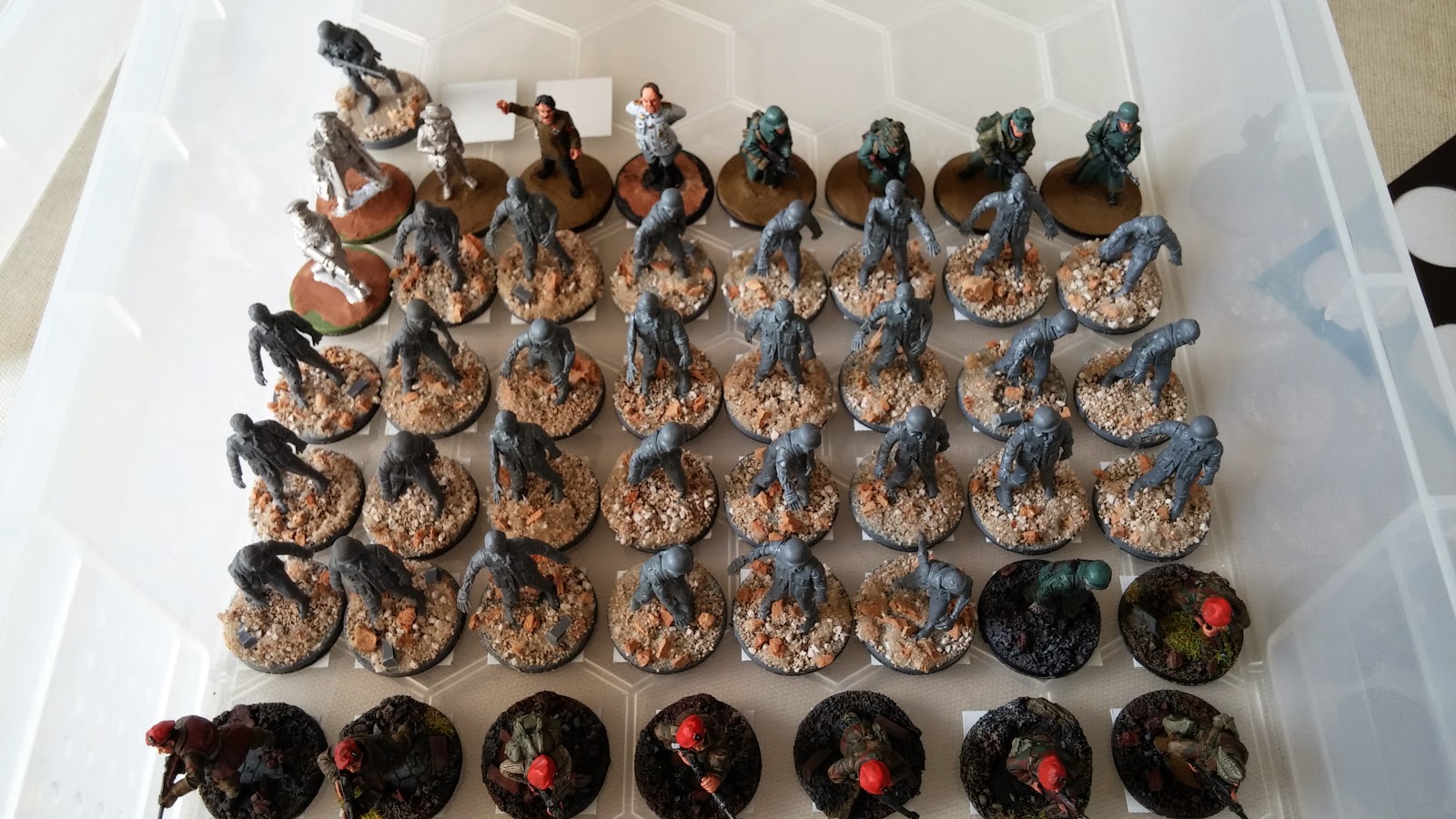 Of course, once I had placed the order, fear set in. What if they weren't very strong? What if they would only hold plastics in place? What would I do about my metal figures? Will there ever be an end to poverty?  You can see the fear was beginning to get the better of me... 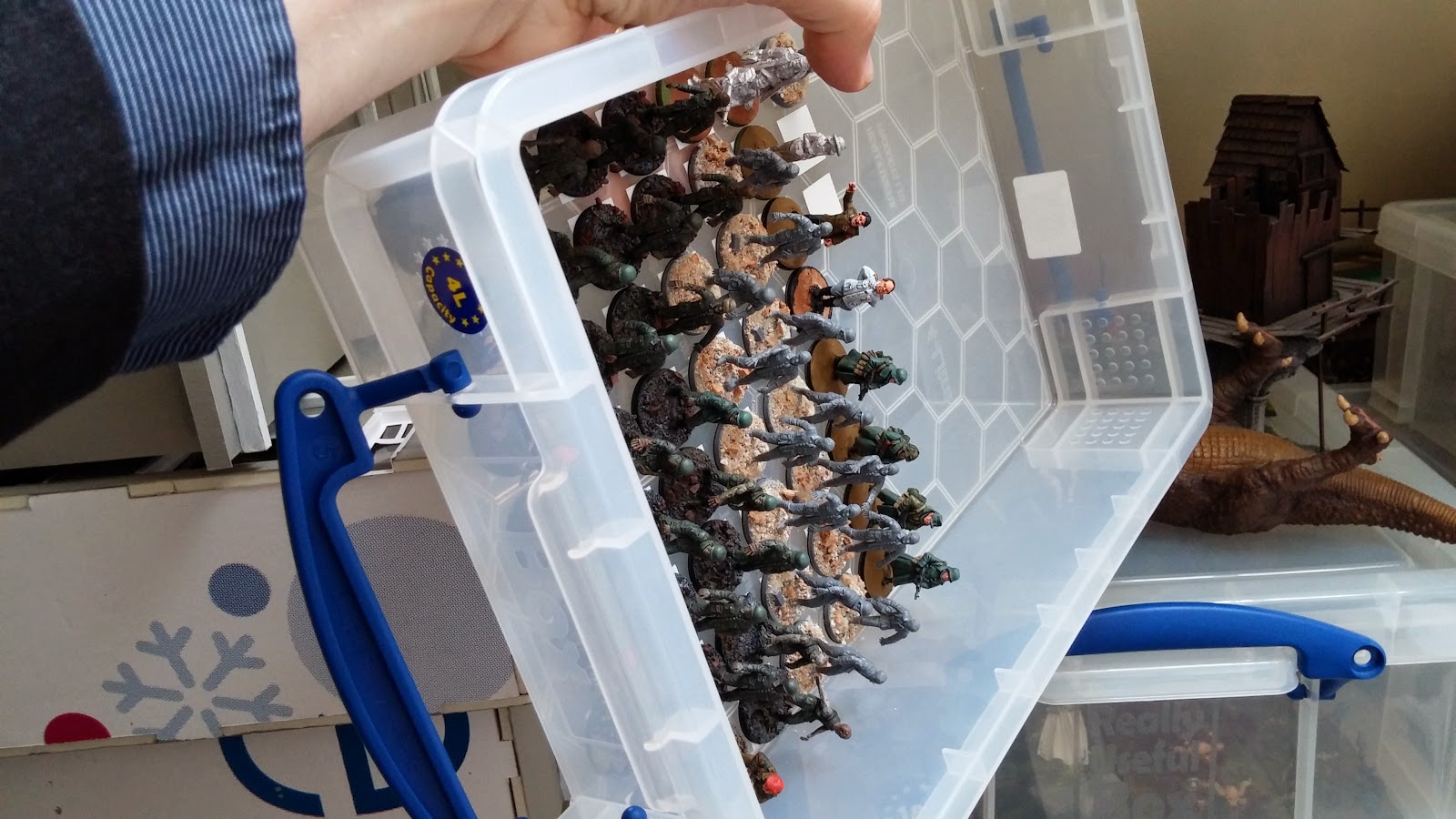 Well, they arrived promptly, and I gave them a go. They come pre-cut on a sheet.  And I was really impressed with their strength.  They hold metal and plastic 28mm scale miniatures really well.  And they fit flush to the Renedra bases I'm using.  Which, for someone like myself, is a REALLY BIG THING! 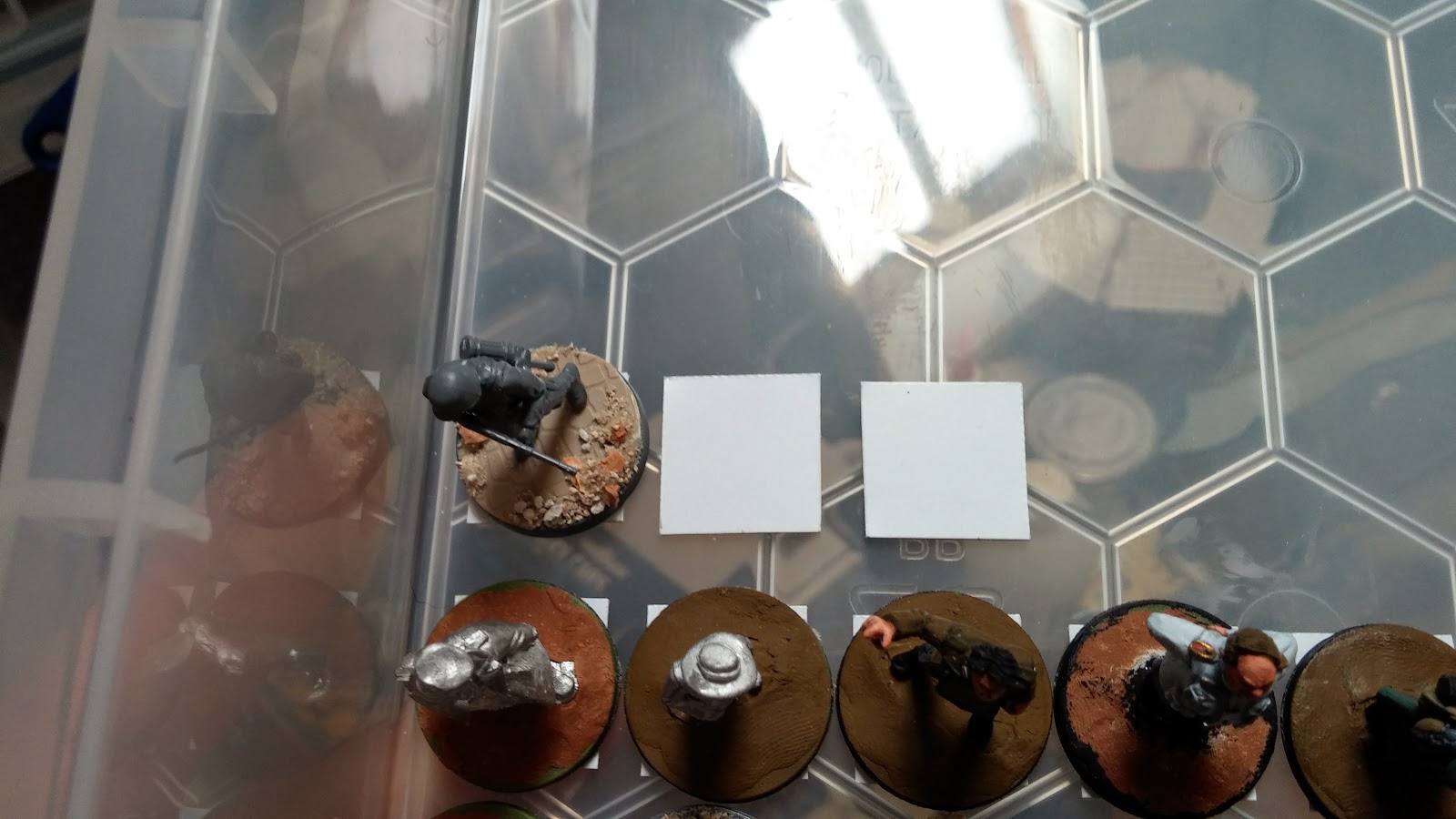 And there's no waste of my steel sheet either.  I simply cut my sheet into 20mm x 20mm squares and attached them to the inside of the Really Useful Box with enough space to make sure whatever was put in there would not bash against each other. 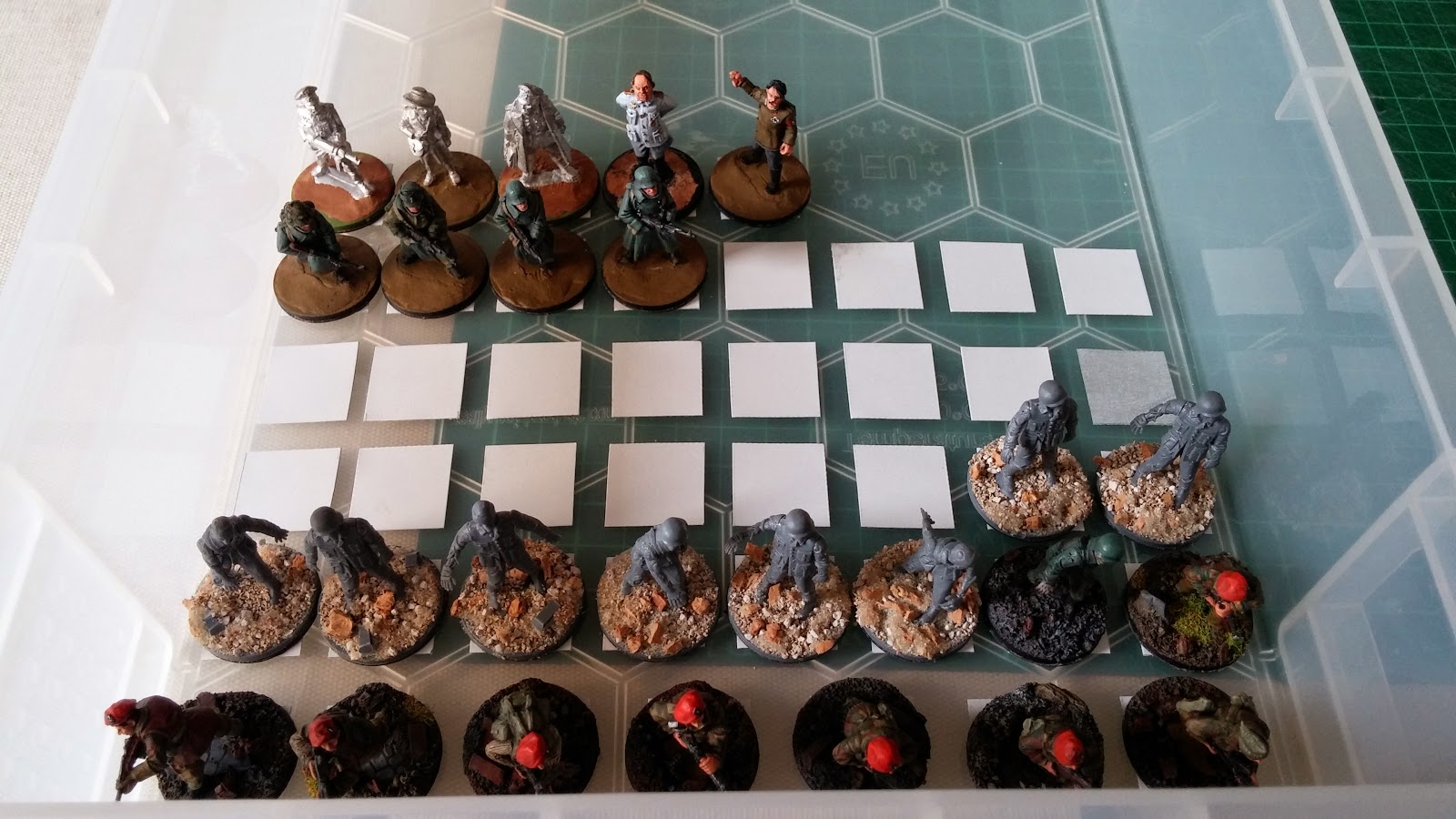 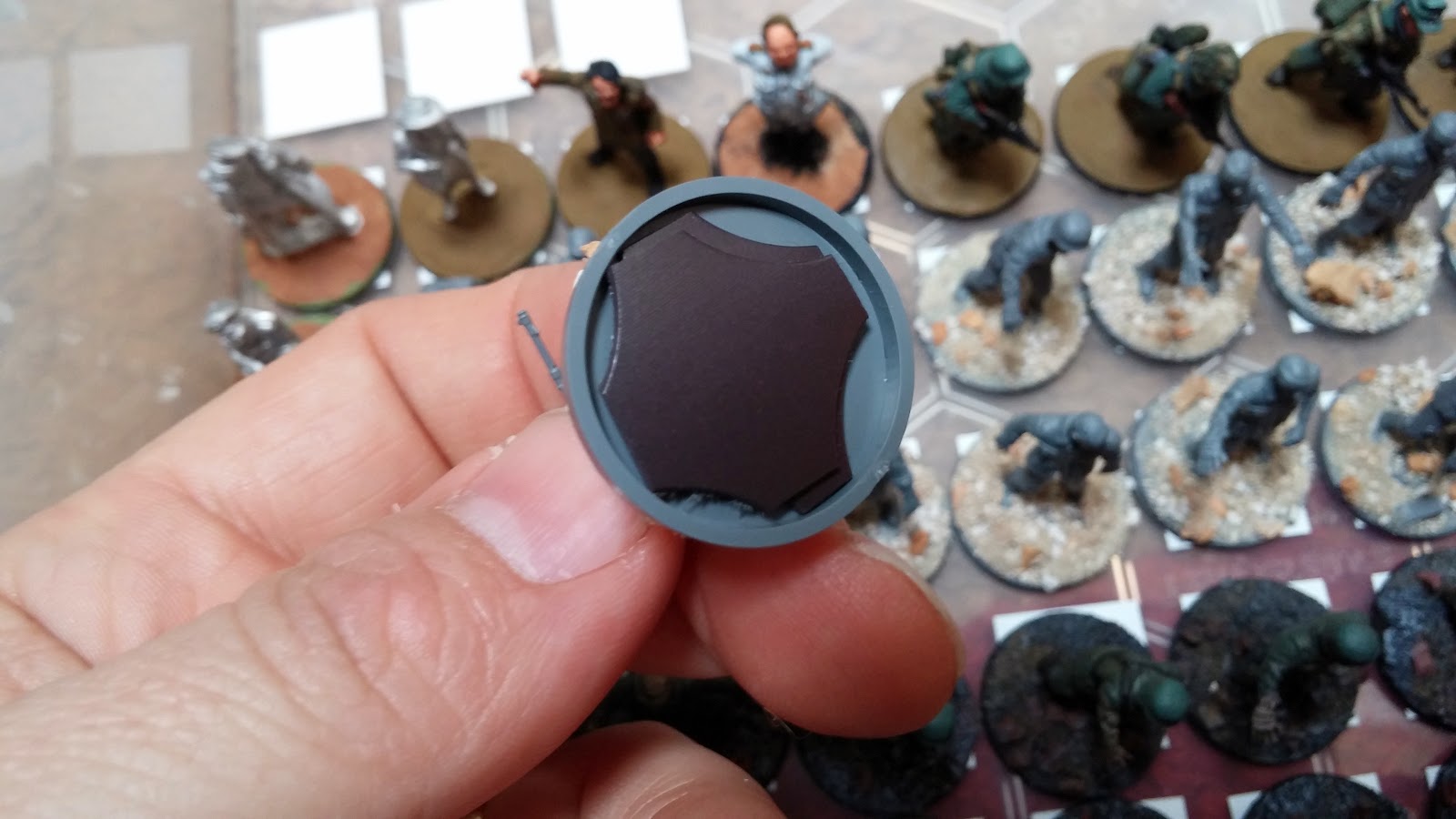 All of this was going swimmingly, until I came across my Wargames Factory minaitures.  Their later packs come with 25mm round bases on the sprues.  Whilst they aren't as deep as the old GW Slottabases (thankfully) they are deeper than a Renedra base.  And they are hollow underneath.  This of course gave me a quandary. But not for long.  I soon realised I could be all eco friendly and make use of the leftovers from the magnetic sheet.  A double layer fits perfectly into the recess and means the magnet lies flush with the bottom of the base. 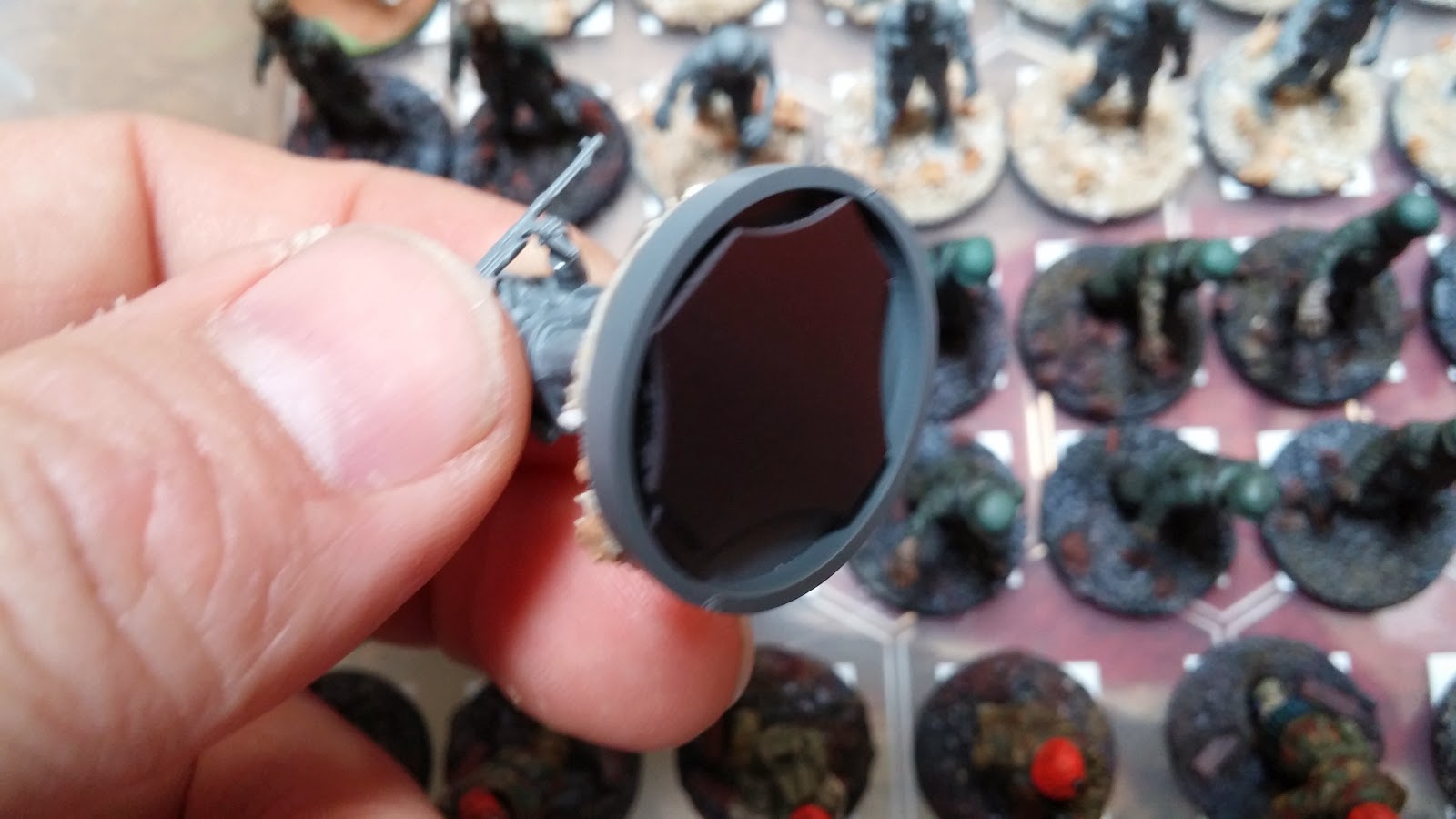 So quick and simple to apply, and they actually really do work.  Brilliantly simple and simply brilliant!