It had all been a bit too much for Il Cattivo.  Cavorting and carousing for hours in The Ace in the Hole Saloon had gotten out of hand.  So much so that the local sheriff had been sent for.  John Hicks Adams had dragged him stumbling and flailing into the Jail to sober up.  After a drunk check at first light, he appeared to be much better and was set free with a caution.  Il Cattivo rubbed his eyes as he adjusted to the early morning sunlight, and was amazed to see Billy the Kid and his accomplices making their way down Main Street to the bank. 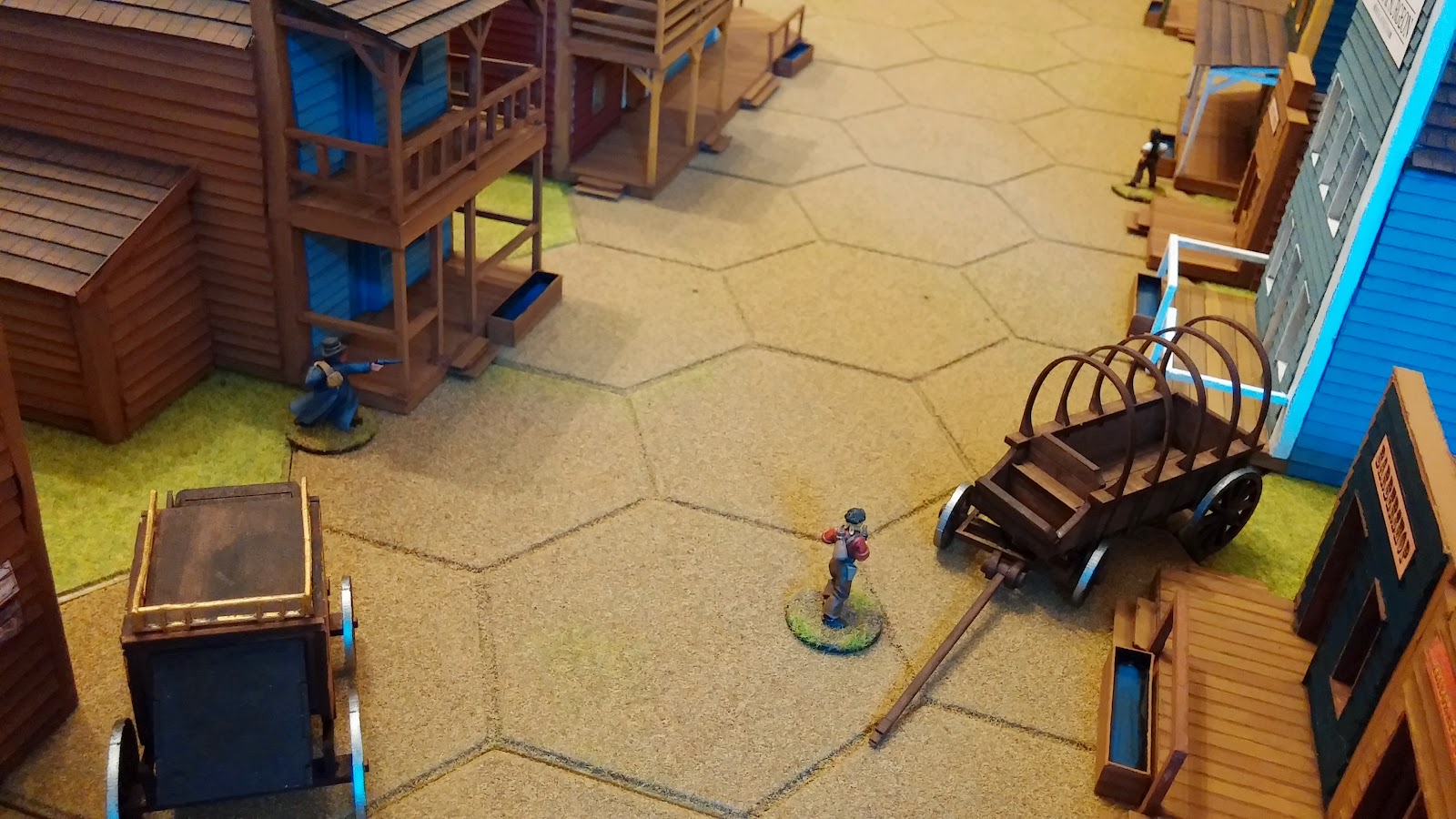 This of course put Il Cattivo's groggy mind into overdrive.  On the one hand, he didn't care what happened to the bank.  He'd happily hold it up himself if he knew what had happened to the rest of his gang.  But they were nowhere in sight.  And the chance to take a shot at Billy the Kid was just too tempting.  So he decided to do what every Mexican bandit should.  He started firing wildly from the hip.  Billy the Kid received a flesh wound to his belly.

As the rest of Il Cattivo's gang began to appear out of houses, Sherriff John Hicks Adams appeared from the Livery Stable.  It seemed he was impressed with Il Cattivo's sudden sense of civic duty (|?!?!?!?!) and had decided to join him in apprehending Billy and his gang.

And as if that wasn't bad enough, Il Brutto stepped out of one of the dwellings beside the Sheriff's office. Poor Billy was looking awfully outnumbered.  And the icing on the cake was the arrival of Il Buono. Thanks to the timeous arrival of the Joker, Il Buono would spend a few more moments chewing on his smoldering cigar...

Main Street was by now breaking out into a serious gunfight.  Everyone was shooting from the hip, rolling more 1's than 6's and running out of ammo.  In the middle of it all a random old gent went dashing from the house of ill repute to the Land Assay Office.  And that young lad came running full pelt out of the Gunsmith's and made his way to the doctor's, no doubt alerting him of a busy day's work ahead of him.  Because by now Billy the Kid was on the ground, suffering a serious wound to his left arm.  As Il Brutto took aim, things were looking grim for the bank robbers. 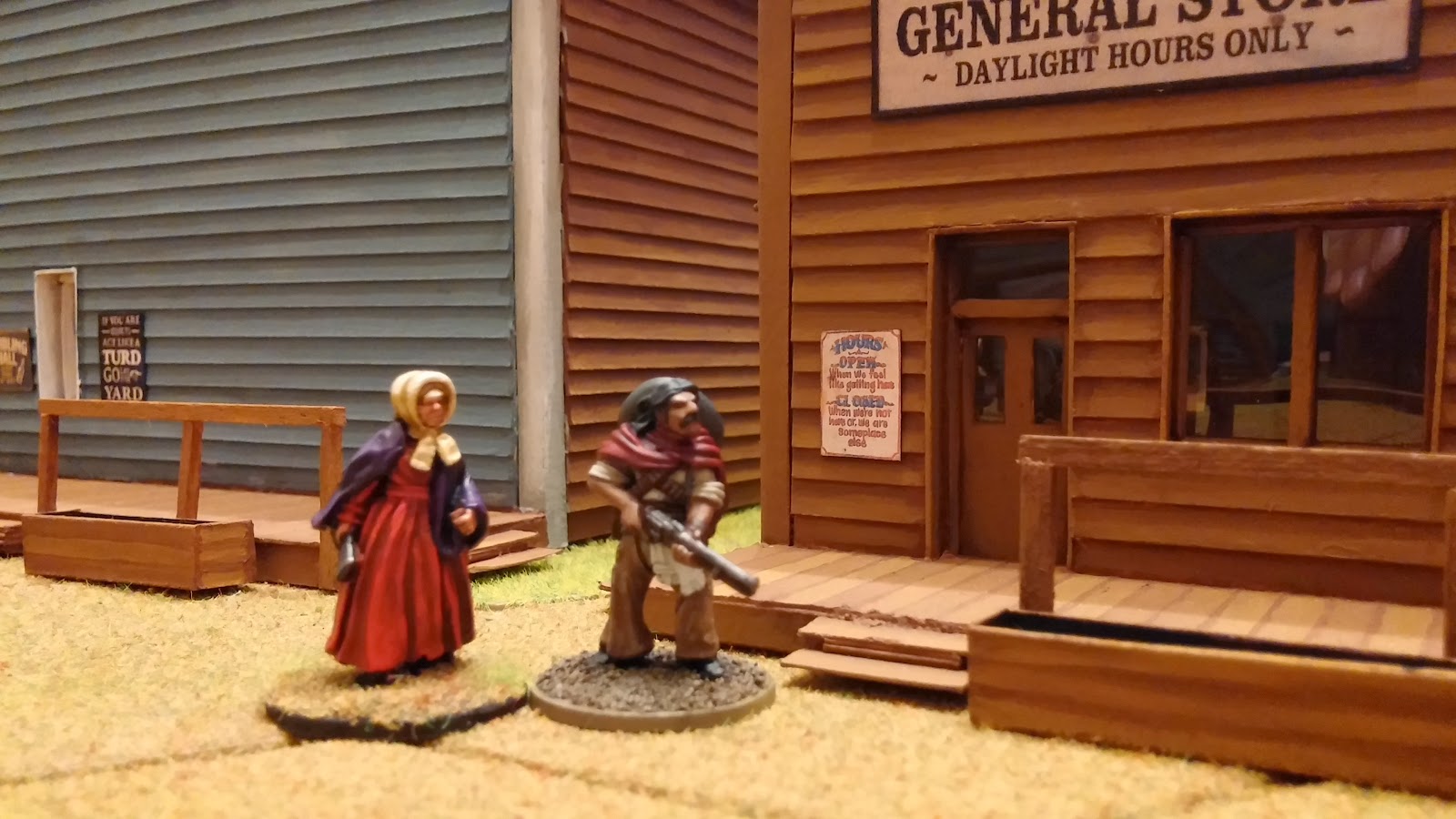 Don Juan found himself distracted by the arrival of his missus.  He had no choice but to leave the firefight and get her back to the General Store and relative safety. By this time Butch and Sundance were taking hits from John Hicks Adams and Il Cattivo. Il Brutto fired on Billy the Kid... and killed him.  With yet another gun jam, Grat Dalton decided to turn and run round the back of that Red House as Il Buono finally flicked away cigar butt and took a walk down Main Street. 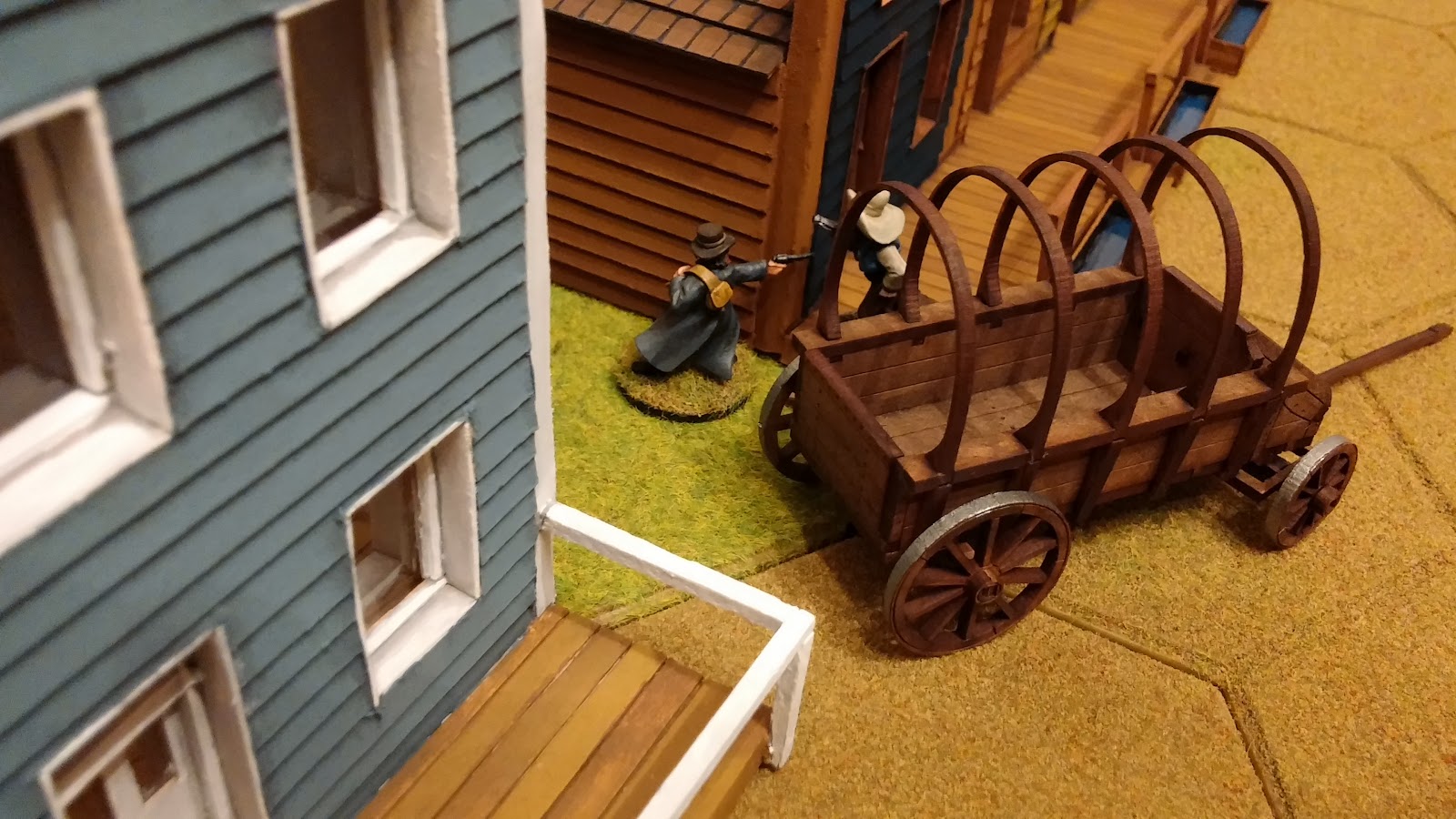 Meanwhile, Harry Alonzo found himself all alone behind a wagon.  Unfortunately Don Demario finally arrived on the table and walked to the wagon.  He began firing from the hip, missed completely and ran out of ammo.  Alonzo returned fire, blazing away.  He too missed and ran out of ammo.  As they glowered at one another whilst desperately trying to reload, Don Demario's mum appeared out of the Barbershop and began slapping Alonzo amid cries of, "Leave my poor boy alone!" Demario decided to follow his Ma's lead and began clubbing Alonzo with his pistol butt.  Alonzo soon joined in.  None of them caused any damage whatsoever, but the catfight brought a comedic end to our game.

And Il Buono?  Well, he caught up with Grat Dalton, walked in front of him and dispatched him with a single shot.

What do we think of The Rules with No Name?  Absoflippinlutely fantastic!  I highly recommend them for their ease to pick up, the fluidity of the games system, the years-ahead-of-its-time Fate Deck mechanic and the sheer fun of the Bystander Deck.  Can't wait for the next game!
Labels: Brian Ansell Old West Wargaming The Rules with No Name The Town with No Name