It's on the Cards!

The Rules with No Name has the option for using a number of different chit piles or card decks.  I've decided to use three card decks.  They are all the same size and are designed to fit into those clear card protector.  I'll print them onto card.  Having spent the last few days tinkering with different designs, here's the Joker card from the Fate Deck. 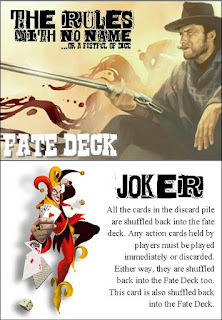 I had tried using photographs from the period, but found it gave the wrong feeling for the game.  I know this sounds stupid as it is technically an historical wargame rather than fantasy or sci-fi.  However, to my mind the game sits more with the classic Hollywood gunfight and wild west mythologies rather than a clinical historical representation.  Which is my excuse for a more stylised approach.  Besides, Clint adds a certain gravitas to the deck!

In addition to the Fate Deck I also have the Bystanders Deck and the Drunk Deck.

I have designed the character cards for the Fate Deck to take a photo of the miniature it represents.  There's plenty of space to write on skill names.  But I'm wondering whether to have a QR sheet for the skills or do cards.  Decision, decision, decisions.

I really should get back to the buildings...!
Labels: Fate Deck The Rules with No Name
Location: Aberdeen, Aberdeen City, UK