Smoke Markers for Chain of Command

So last week I was able to introduce a good friend of mine to Chain of Command in North Africa 1941.  I'd made sure I had everything ready.  Or so I had thought.  It soon became obvious that I needed some 3" circular markers to represent the smoke laid down by the British 8th Army 2" mortar.   And I hadn't even thought to make any.  So here's how I went about solving that problem... 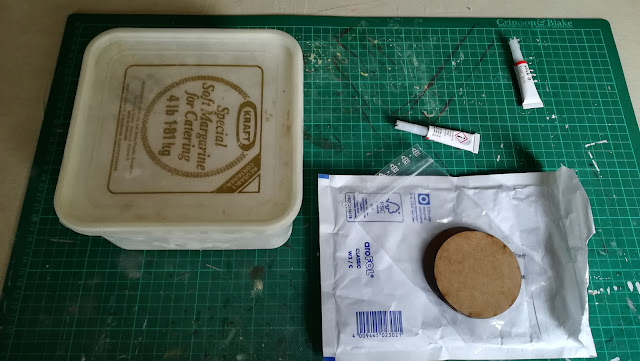 First, I went online and ordered some 75mm diameter 2mm MDF circular bases. The best deal I could find at the time was 6 for £2.20, post free. Once they arrived, I was able to get to work on them.

I looked out my desert mix (which you can find out all about here!) and some glue to use.

Now, I really like using superglue. I get seven tubes from Poundland for, well, take a guess how much!  Why do I prefer this over PVA?  Well, I often use my own base mix for my models.  This gets applied before I paint the figures, so it gets done before the undercoat goes on.  And because I use my acrylic paints to undercoat (stop tutting at the back!) the water can sometimes affect the PVA and make it lift off from the base, somewhat like the top layer of your skin when you've been out in the sun too long.  Plus, superglue dries a lot quicker.  Which, if you're struggling for time, can be a good thing.  (Just so long as you don't stick them in your Really Useful Box too soon and snap the lid in place.  That just leads to smokey effect on the plastic, which makes then into not so really useful boxes when you're trying to see what's inside them.)

So you can probably understand why I wanted to use superglue on these bases.  Especially considering this mix goes on as it is and it's done right away.

Let me tell you why this was A BAD IDEA.  I began by applying the glue sparingly, using the nozzle to push it about the base.  I looked at my handiwork when I had covered it all, proud of the way that I had such a thin veneer of glue on the base.  And then I must have tilted it about two degrees off its horizontal access.

It was at this point that I realised some had rolled off.  All over my hands.  I put the base down just before I had MDF permanently attached to my fingers.  A moment later my skin began to undergo the whole heat process as the burn kicked in.  I managed to get my fingers under the tap and help it to calm down, and then went back to my cutting mat which by now had more than a few drops of superglue on it.  I used some kitchen roll to tidy it all up as best I could, and applied the base mix before the glue was wasted.

WEll, I wasn't about to do that with the rest of them, I can tell you.  So I went back to using PVA.  You can see the results in the following picture.  Needless to say though, the one with the most stones on it is of course the one that was covered in superglue. 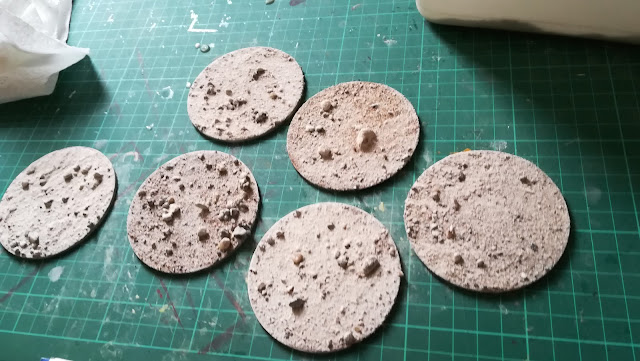 I left everythign to dry overnight.  The following morning I wanted to spray a mix of 50% PVA and water over the top of the bases.  This reacts with the tile grout in the mix and forms an incredibly hard bond.  Of course, this took a long time to dry, and with appointments throughout the day, it was dark o'clock by the time I came to add the smoke to the bases.  This last photo of the bases before the smoke was added was taken with the lights on so the colours are a little darker than they are in real life. 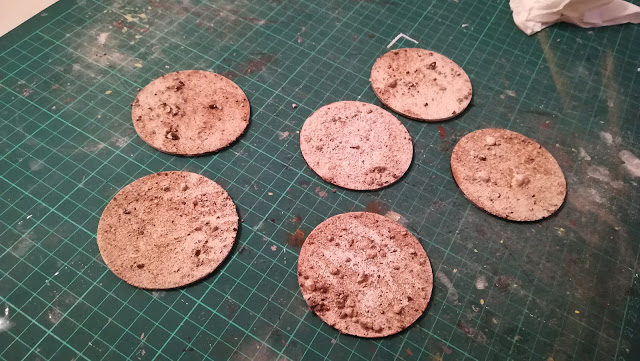 For the smoke, I used some stuffing material from the craft shop.  (Or in this case, from my daughter's supply) .  I pulled out six small balls and then set to work on each one, teasing them out gently to increase both their size and to make them look like smoke rather than cotton balls.

As I did this, I tried to make sure that I put it down on the table top a few times, just to make sure that I was keeping a flat base. Then I applied some small amounts of PVA to the underside and stuck them in place.  You can see the end result int he next photos: 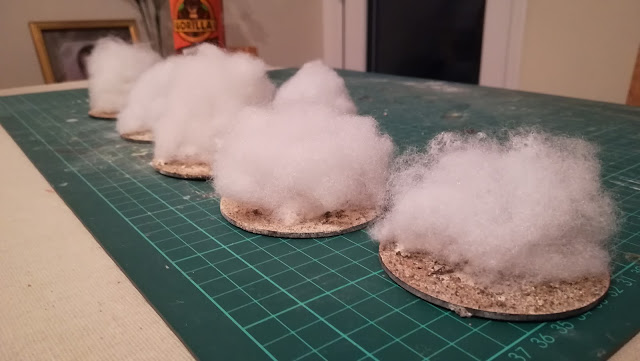 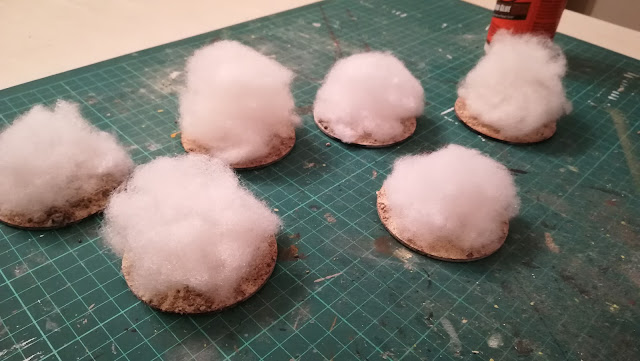 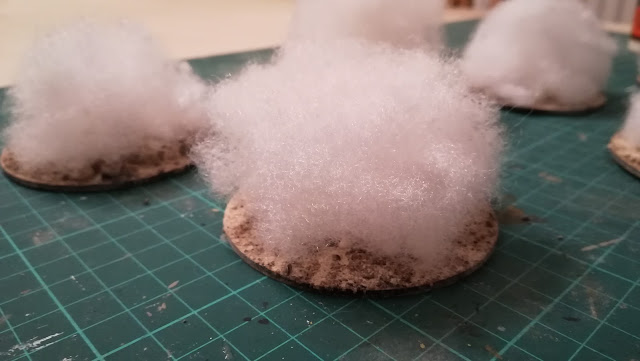 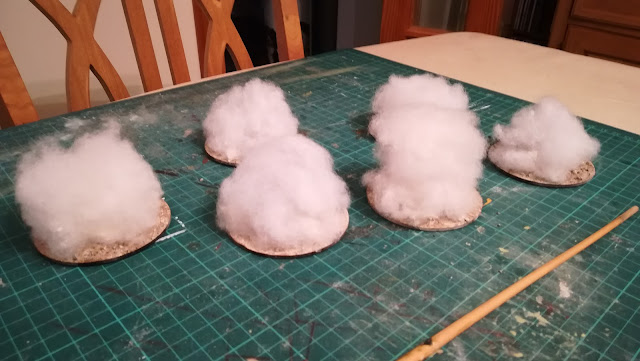 And finally, here's one of my Jump Off Points with a Mounted Yeomanry officer using his binoculars to peer through the mist. 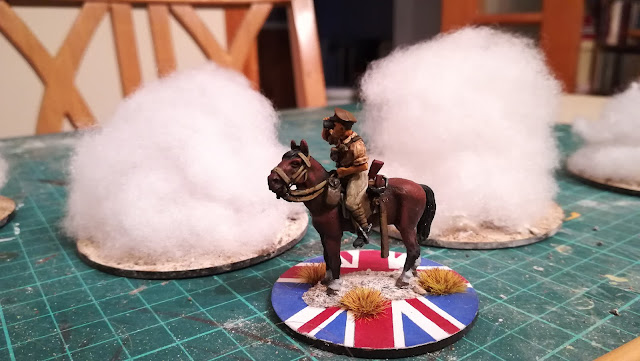 Personally I'm really happy with the result and can't wait to see them in use on the gaming table.