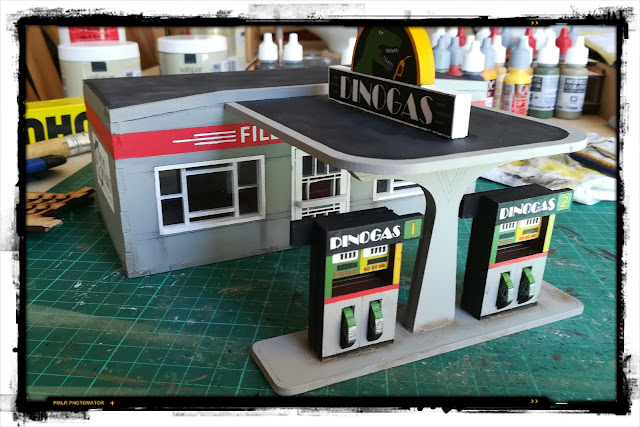 Sometimes you need to get some scenery ready for a game with a rather limited timeframe.  Sometimes, if you're like me anyway, this leads to some digging around in the loft, convinced that there's something up there you started before and can get finished that will be just the ticket.  This was my experience this weekend ahead of our next game of All Things Zombie.  I had a lot of fun working on this yesterday, and have just found some time to write up what I've done.

So, after a long time of neglect, I've finally gotten round to completing TT Combat's Dinogas petrol station! This story began a long while ago. January 2016 in fact. You can read all about it here. Apparently, it had been my intention to write up the build in one post. This clearly didn't happen for a number of reasons, not least of which was that I didn't pick it up again until June of that year. My musings on that stage of the build can be found here. But now we fast forward to the present and I find myself looking at a lovely MDF kit needing some tlc. 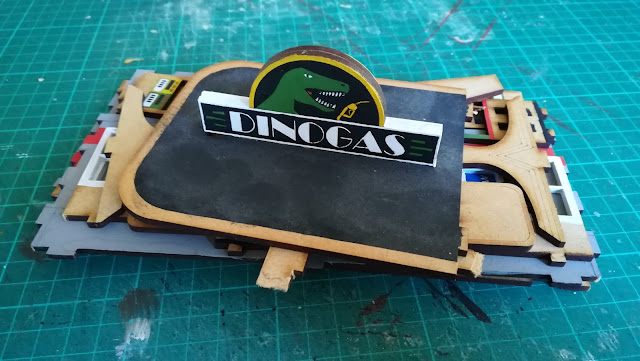 I've learned since these early days with MDF that you can't do better than spray them with a decent primer. And I've also learned that there's nothing better for the job than a can of spray paint from Poundland. So much cheaper than the one I got from B&Q...

Anyway, Here are the pieces all laid out on my trusty cutting mat. 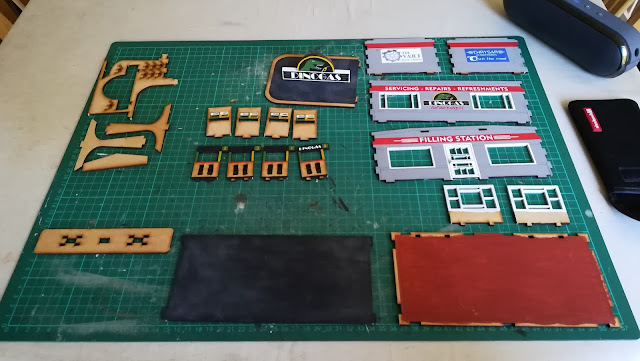 Having looked at what needed to be done, I then went to the loft and my bedroom and collected the stuff I needed. You can see it all in the next photo. 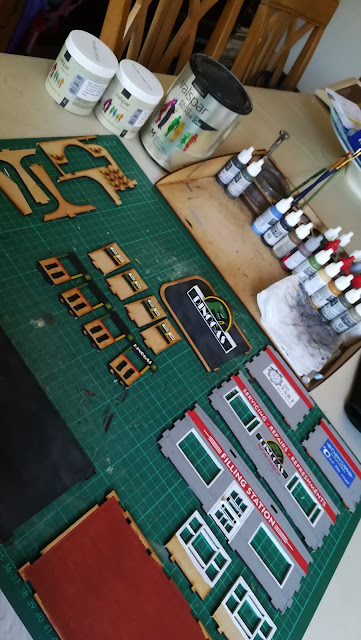 It was at this point I realized I needed to glaze my windows, so back I went to get my steel rule, craft knife and some clear plastic. TT Combat sells packs of the stuff. It's yet another reason to love this fantastic company. As you can see though, I'm not using it. Oh no. I'm saving the pennies. Over the years I've collected clear plastic from any source I can find. Packaging for toys. Packaging for Christmas Crackers. And in this case, packaging from a box of Christmas cards. look, you can seven see the prie in the top right-hand corner! 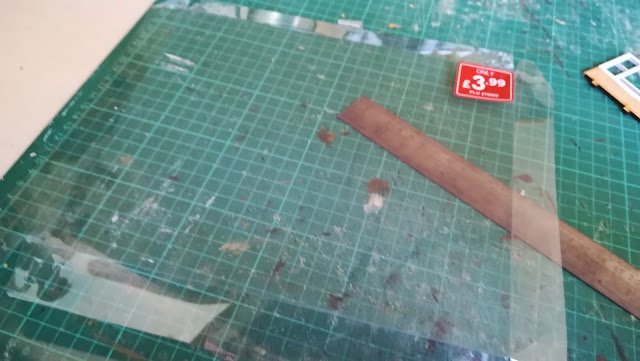 There's always a trade off when it comes to glazing your windows. You have to find the best place to put it. This isn't a problem when you're scratch building your scenery. You can sandwich it between layers quite easily. But it always throws up a bit of head scratching with an MDF kit. What I normally do is place it inside the building so the window frame is in front of the perspex. I then either paint the frame onto the perspex freehand or, if it's not too fiddly, I'll copy the frame onto some card or plasticard and affix it in place in the inside. I prefer the latter as it can be hard to get a decent flat coverage of paint on the clear plastic.  Probably the downside to using cheap plastic...

This kit is slightly different in that the front and rear windows are not the same. I stuck the perspex onto the inside of the back windows. But the front windows are made of two layers. And to cap it all, the framework is rather fiddly.

I have to confess, I took the easy option. With a very limited time frame to complete this build, I didn't feel there was any other option. I glued the perspex between the two layers of MDF. This technically means that it sits in front of some of the framework. But you know what? It still looks good. Which makes me begin to doubt my earlier insistence on the longer method... 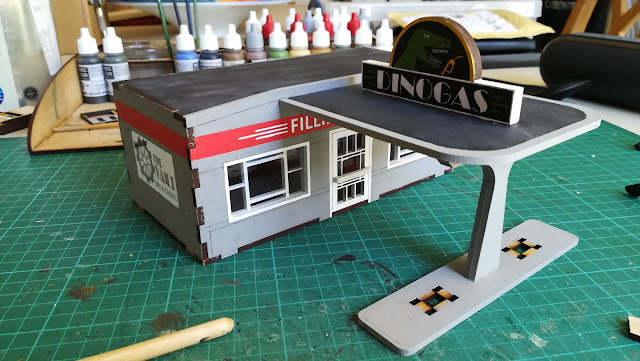 Anyhoo, I then turned my attention to the petrol pumps themselves. There's some lovely detail on these. Bloomin' hard to paint at the best of times and even worse when you've a time frame. What I needed to do was bring out the Dinogas logo. I'd done one before but had obviously stopped because of the level of difficulty.

I decided to do what anyone else should do in these circumstances.  That's right. I applied the paint in a deliberately sloppy manner to make sure it flowed into the thin lines. You can see the progression of splodge in the next photo...! 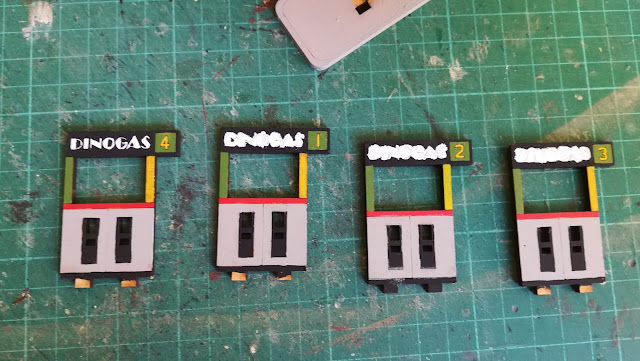 Having let this dry properly, I then began painting around the lettering with the black. It was so much easier doing it this way. 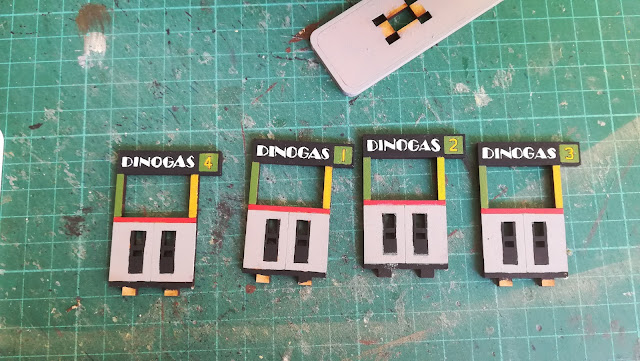 If you clicked the links above, you'll see that I used PVA to prime and seal the MDF. I had then begun the rather laborious task of hand painting everything. When I had done so I had been blissfully unaware of the suitability of spray paint for the task. So I had used my grey acrylic paint. Which proved to be a big problem. When I went to get it, I found it had dried up. This was a pest because I still had some sections that needed to be painted grey.

Thankfully I had some grey emulsion left from my work on the baseboards. It was a near match, but it was a little lighter. I, therefore, set about painting the interior walls and remaining pieces. When these had dried I set about assembling the kit. I was then able to paint the exterior of the garage shop, covering over the exposed joints. I also painted over the main grey of the building, using the slightly darker colour underneath to add some definition. Then, when this was fully dry, I dry brushed some English Uniform around the bottom of the building, around the bottom of the petrol pumps and at the windows to show water marks. You can see this work in the next few photographs. 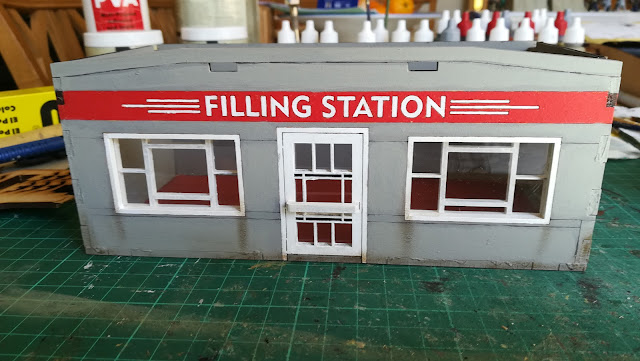 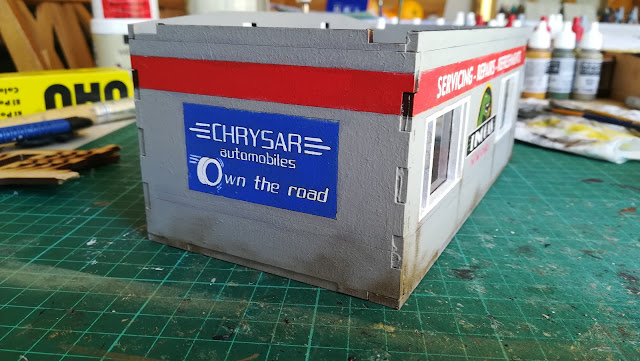 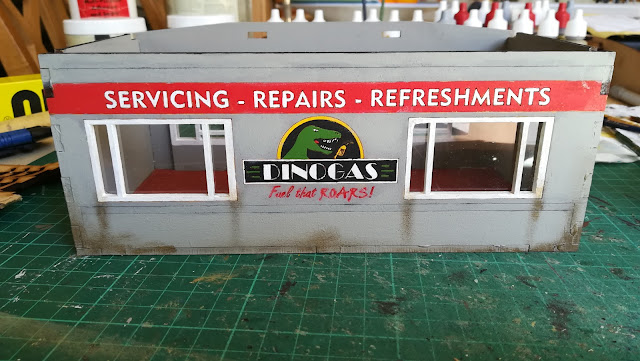 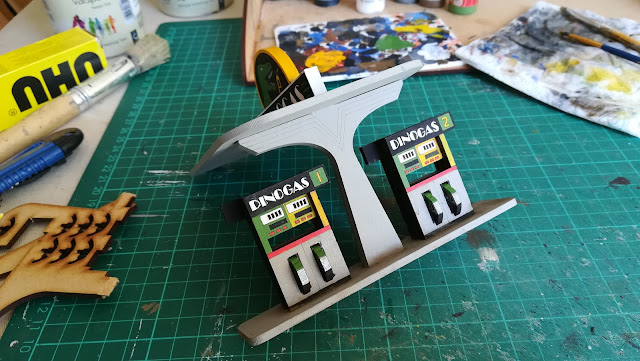 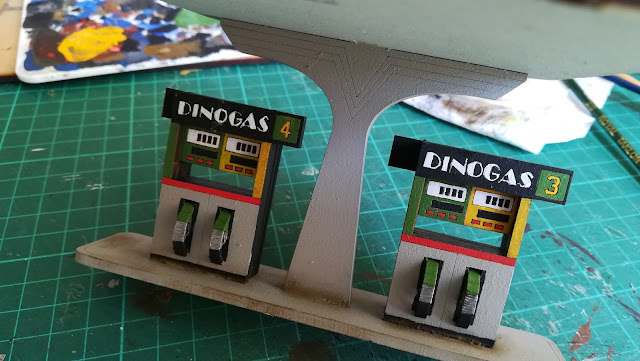 Herre's a view of those extra depth windows I was speaking about above somewhere. 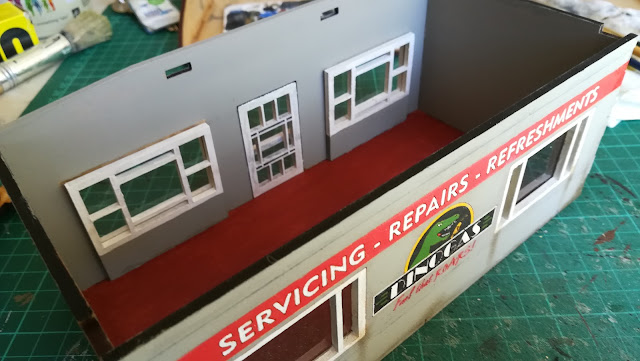 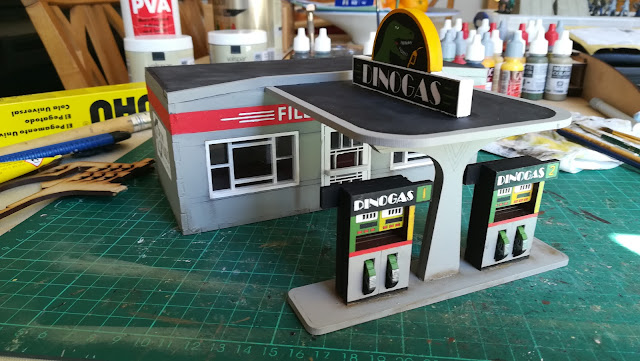 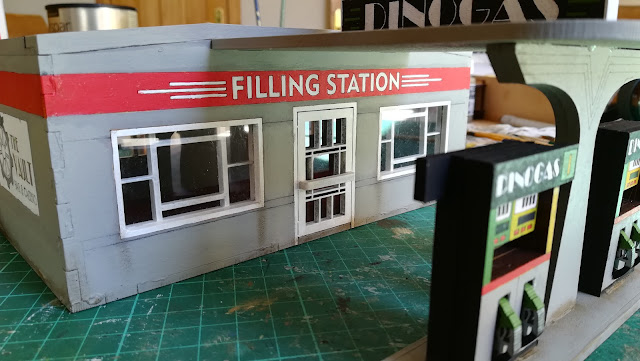 So there you have it.  A wonderful little kit with plenty of detail.  The roof lifts off to allow you to game inside.  It's made from 3mm MDF which is incredibly rigid.  And for only £7.95, a complete bargain at that.  And yes, that's the same price as it was back in January 2016 when I purchased it. 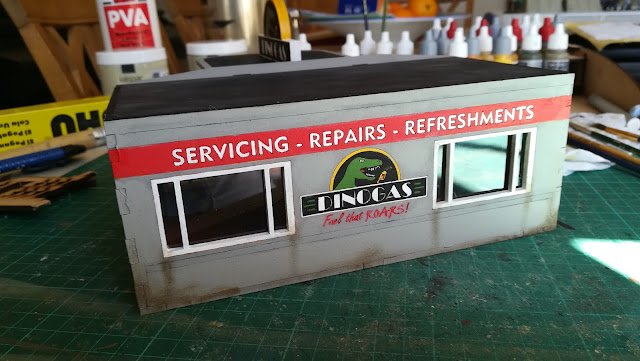 I've got to be honest.  It's a really lovely kit to build.  TT Combat products are brilliant.  Don't get me wrong, I love scratch building scenery.  But it is very time-consuming.  Rewarding, definitely.  But a large project won't come together very quickly.  If you're on a tight budget you may well not have another option.  But if you can afford a kit or two from TT Combat you'll be spending your money very wisely indeed.  I honestly can't recommend them enough.

Now if you'll excuse me, all this talk of All Things Zombie and A Fistful of King Fu has reminded me.  I have TT Combat's Tavington Heights up in the loft.  And their huge City Warehouse sprayed and awaiting some TLC...

As always, thanks for stopping by!
Labels: 28mm Modern City Scenery A Fistful of Kung Fu All Things Zombie MDF Scenery TT Combat