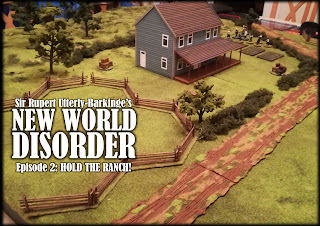 In the last episode (which you can find here) Sir Rupert and his chums had faced a setback.  Dirk Beauregard had been captured by the Black Dragon Tong.  Goonda had received a nasty bump on the head.  Lady Constant Anne-Oyannce Payne had been about as much use as a chocolate fireguard and was still moaning about the lack of civilisation in the New World.  Count Otto von Wahnbildt was still cussing in German.  Sir Rupert's black mood hadn't lightened any.  And as for Sergeant Reynolds and Private Gathering?  Well, they were simply trying to keep their heads down and not exacerbate the situation. 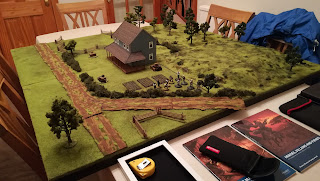 All they had was a scrap of paper Dirk had left behind.  It was their only clue.  They would have to turn their backs on Stiff Gulch and head for Wurts Ranch.  Honestly, who names these places? 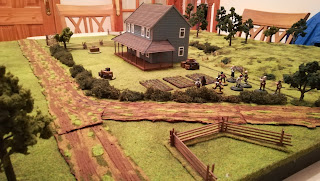 Major Payne and his wife Lady Constant decided to return to the hotel.  Having assured everyone that Goonda was perfectly fine, Sir Rupert led his companions to Wurts Ranch.  Of course, we use the term led in the loosest possible sense.  Sir Rupert hadn't a clue where it was.  That they arrived in one piece was perhaps a miracle in itself.  He'd blustered, shouted at and generally offended every American he'd met along the way.  And it wasn' going to get any better once they turned off the dirt road onto the Ranch either... 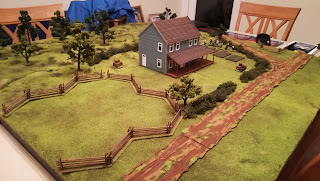 We set up our second game based on scenario 9.1.6. Fort Nil Point.  We'd both faffed around with our forces a little bit.  I'd discovered that my points were all over the place in our first game.  (Let's not even mention the jammy Pluck rolls Derek was making!) I'd assumed I was playing with 309 points when I was actually using 290 points worth of characters.  Beyond that, I wanted to bring in some cheaper troops to swell my numbers.  We had been heavily outnumbered in our first encounter.  I decided to involve the Secret Service and had the perfect opportunity to crowbar them into our game.  I would thus be fielding Sir Rupert Utterley-Barkinge, his faithful manservant Goonda, Count Otto Von Wahnbildt, Sergeant Reynolds and Private Gathering who with the revised points come to a grand total of 222.  I added 5 Secret Agents lifted from the rulebook.  The only modification was to replace their arc pistols with normal ones.  The crazy science stuff will begin to appear as our games progress. 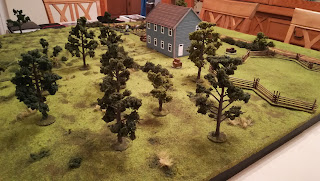 Sir Rupert arrived at Wurts ranch to find it occupied by five Secret Service agents who didn't take kindly to some Englishman poking his nose into their investigation.  It didn't help any that Sir Rupert kept referring to them as 'Blessed Pinkertons'...  And as international relations continued to slide inexorably towards fisticuffs on the porch, Private Gathering alerted them to movement in front of and behind the ranch.  It looked like the Tong were also looking for whatever was contained in the small box on the desk.

Unsure whether it was the threat of violence in general or Sir Rupert's calm assurances that everything would be okay when a rather blue and cold looking Sasquatch appeared, but the verbal fracas came to an abrupt end.  Suddenly it was as if they were the best of friends. 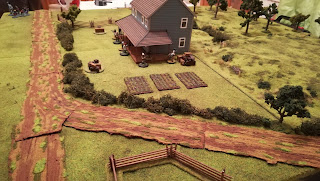 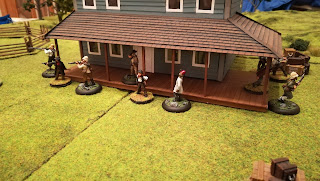 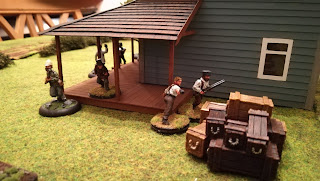 Derek decided to divide his force into two groups and would place them in corners of the board determined by a dice roll. 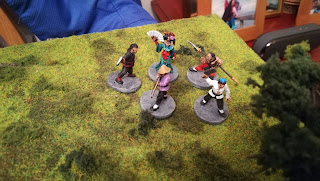 The result was two opposite corners.  According to the rules, we would play twelve rounds.  After this time the company in possession of the Ranch will bring in overwhelming support to wipe their enemies off the board.  Sir Rupert was desperately hoping for the arrival of more Pinkertons...! 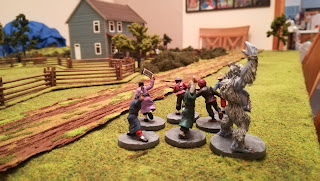 The Tong were quick to advance.  Those appearing at the dirt road moved to take full advantage of the available cover. 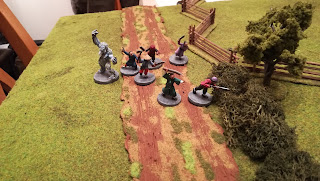 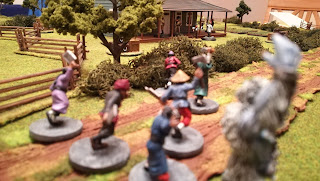 Whilst the others might look more exposed, we considered the rough terrain they were on to count as Type 1 as well. 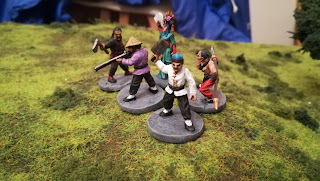 The lead Secret Agent moved to the nearby cover of the crates.  As the Tong drew closer, Hunting and Military Rifles sounded and the Tong began to fall.  The main assault was happening at the front of the ranch.  The Tong were being thinned, but the Secret Agents were getting spooked by the Yeti.  Sir Rupert tutted in disgust, levelled his Hunting Rifle, aimed and fired.  The Yeti failed his Pluck roll and was taken down. 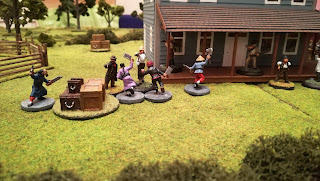 Goonda was having little luck with his carbine.  Perhaps it was his head wound. As the Dragon Lady drew ever closer to the back of the ranch, the Agents and Private Gathering soon had their hands full.  Shots were hitting but failing to cause damage.  It looked like it would soon come to a fistfight. 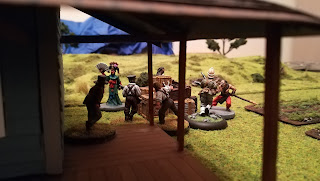 Sergeant Reynolds was charged but managed to kill his assailant.  There were two Tong on the Secret Agent.  Count Otto steadied his aim.  Making full use of his Hunting talent, he shot one as he raised a nasty looking blade to strike a fatal blow.  Meanwhile, Private Gathering was felled by the Dragon Warrior.  It was down to three Agents to hold him and the Dragon Lady at bay. 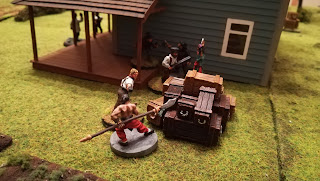 Sergeant Reynolds defeated the remaining Tong member at the front of the ranch.  They began to make their way around the ranch to help the Agents.  It was at this point that the Dragon Lady and her warrior decided they would have to surrender the field. 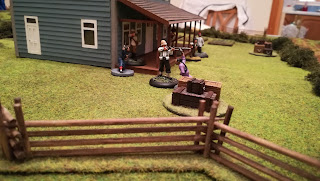 The Secret Agents breathed a sigh of relief.  "Wonderful sport, eh what!  Any chance of a cuppa?" Sir Rupert asked. 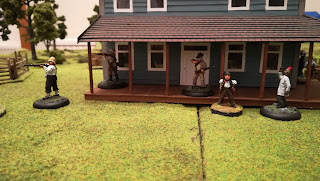 Not even Goonda's erudite wit was going to get him out of that one...
Labels: 28mm Skirmish Wargaming In Her Majesty's Name Sir Rupert Utterley-Barkinge Sir Rupert's New World Disorder Steampunk The Ministry of Gentlemanly Warfare Victorian Science Fiction