The Doom of Aethelweard Part Six 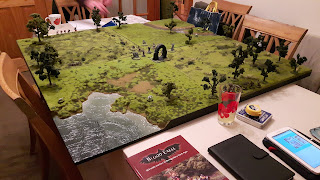 The Doom of Aethelweard can be viewed in all its original glory from the very beginning by clicking on each of the following links in turn:
Part 1: The Raid
Part 2: Making Off with the Spoils
Part 3: Bring Him Back Alive!
Part 4: The Sacred Banner
Part 5: The Wild Hunt
Aethelweard had hardly been able to allow the hunting and killing of the Fiery Great Boar to sink in before learning even more terrible news.  The Draugr had been spotted approaching the ancient henge known as Rollbad. (This is not to be confused with the Rollright Stones, three Neolithic and Bronze Age megalithic monuments located near the village of Long Compton on the borders of Oxfordshire and Warwickshire.  No one has a clue how, or indeed when, this lot of stones appeared.)  Aethelweard had no choice but to rally his men once more and set out to Stop the Ritual (10.1.16)! 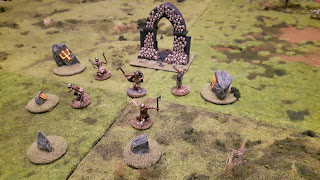 We played this scenario with a few modifications.  The rules state that two rival warbands are seeking to stop the ritual being performed by a sorcerer protected by six Draugr warriors.  As my opponent is Draugr anyway, we didn't see the point of this.  So instead, we determined that the sorcerer, hereafter named Not-Soggan, would begin the game in the centre of the table at Rollbad Henge protected by four Draugr warriors who must set up and remain within the circle.  The Draugr force would then be made up to the available remaining points (in our case 256) and I would field up to 300 points of troops (you know, since I had a pool of 412 points).  We would deploy up to 6" in from opposite table edges.  The ritual would be completed in 12 rounds. However, due to failing to get the Fiery Great Boar's tusks, the Wyrd powers were beginning to wane in Aethelweard's lands, and all Fate rolls to cast Wyrd powers would be at -3 for the duration of the game.  If the Draugr were able to successfully complete the ritual, they would earn +30RP.  I would earn the same amount if I managed to stop the ritual by killing Not-Soggan.

My men took full advantage of the 6" deployment zone. Te fell Draugr did the same at their table edge, aware from previous games that my men had a greater movement speed than they. 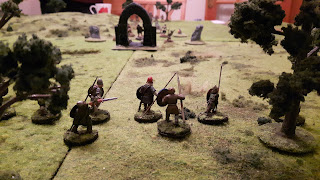 At the end of the first turn, both sides were closing in on Rollbad Henge.  You'll notice that the still chanting Not-Soggan had stepped back to screen himself with the warriors. Evil cowardly villain! 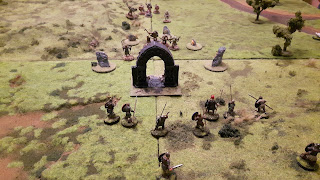 And in the second turn, you can see that battle was joined.  As usual, Aethelweard and Eadwulf were hampered by having such good armour and would take another turn before they could join the fray. 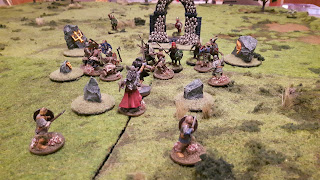 Draugr warriors began to fall as a shield wall of sorts was established by my brave Fyrd spearmen. 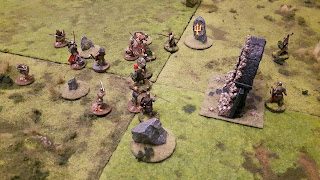 In the next turn more Draugr joined the battle, including Glars Glarsson's successor.  You can see her in the middle of the next picture.  She's the evil Draugr shieldmaiden with sword held aloft. 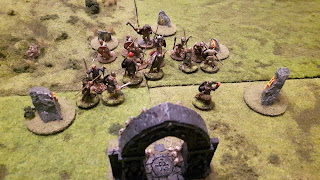 Aethelweard was now engaged in battle with the Draugr... 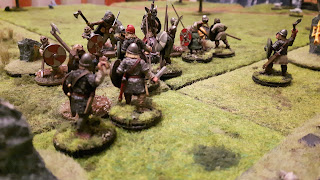 And he made mincemeat out of them.  Go Aethelweard! 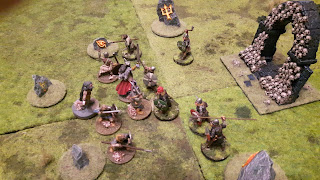 One Draugr warrior shambled forwards to engage the Fyrd spearman.  But the brave Aethelweard wasn't in base to base contact!  He saw his opportunity and charged the only Draugr warrior that stood between him and Not-Soggan. Meanwhile, Eadwulf was locked in combat with the Draugr Shieldmaiden! 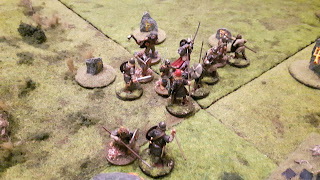 And with the Draugr warrior killed, and both sides losing men, the game hung in the balance.  Who would win the initiative roll in the next turn?  Would the Draugr activate first and move their Sorcerer out of harm's way? 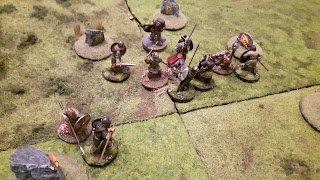 Nah!  The dice rolled true; the Anglo-Saxons had the initiative!  Aethelweard charged right into Not-Soggan.  With all the remaining models already engaged in vicious hand to hand combat, we moved straight into the combat phase.  And as I had initiative, I got to choose who would fight first.  Perhaps completely unsurprisingly I chose Aethelweard.  His long sword came crashing down with such force that Not-Soggan simply didn't have a chance. 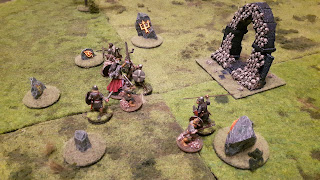 And as the ritual came to a sudden halt, our two forces stepped back from each other warily.  The Draugr surrendered the field to the victorious Aethelweard and his men, and we took stock of the consequences of the battle.

Aethelweard had seen his skirmisher and four Fyrd spearmen fall in battle.  Thanks to some successful Fate Rolls, he had only lost the skirmisher and one of the spearmen.  However, that reduced the pool by -46RP.  Gaining +6RP for slaying Not-Soggan and three warriors and +30RP for stopping the ritual, Aethelweard's win actually cost him -1RP overall and reduced his total to 402RP.

The only consolation was that Non-Soggan was well and truly dead, along with one of the Draugr warriors.  The Draugr now had a total pool of only 215 points...

The Saga will conclude with one more battle.  Death at their Heels (10.1.9) will be happening on Monday night.  The report of that fateful conclusion will be here on this blog before that week is out!