Robin Hood: Back to Basing

Well, I'm absolutely delighted to get some hobby time after a busy week or so.  I'm blessed to have a lot of projects and things on the go, but this has a habit of causing what I call Pandora's Box paralysis (PBP) known to many others as the Wargaming Butterfly Effect.  So, after no small amount of humming and hawing, I decided it was high time I got on with my Robin Hood project for Blood Eagle.

You may recall that this project began as a simple idea about a year ago.  But like all good ideas, it is a tale that has grown in the telling.  What was originally about a dozen miniatures is now sitting at thirty-something. It was high time I set about basing them!

First up then was my command set for the Sheriff's men.  This is from the incomparable Perry twins, specifically from their Crusades range.  This is CU1 which, from left to right in the photo below are now Robert de Rainault, High Sheriff of Nottingham, Sir Guy of Gisborne and a mounted officer.  Admittedly, it is a bit of a demotion for Bohemond, but them's the brakes! 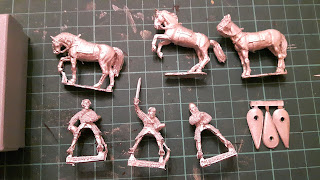 I decided to take the plunge and try and remove the excess metal from between the reins of the Sheriff's mount.  I decided to use my drill for this and made a number of holes along the middle of the section before using my scalpel to remove what remained.  I then neatened it all up with one of my files. 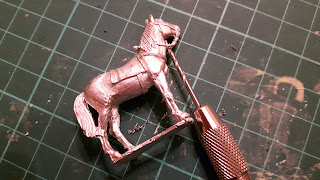 Here's all three of them mounted on 40mm diameter 2mm deep MDF bases.  As always, I've stuck magnetic discs to the underside so they won't slide about in my Really Useful Box.  If you're interested, the magnetic discs are available from The Fridge Magnet Shop. 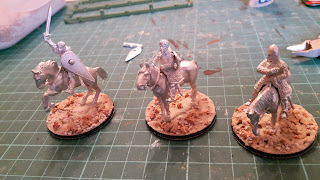 I've applied my usual Base Mix which consists of sand, railway ballast and some cork chippings. 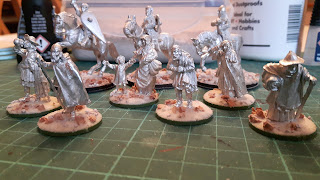 The other figures you can see in these photos are CU27, a set of pilgrims for the Crusade.  I'm going to be using them for civilians which come in very handy in games of Blood Eagle.  They will, of course, be accompanied by the monks I've painted and used in Blood Eagle already.  You can see some of them here.  Anyway, I'll let the pictures speak for themselves... 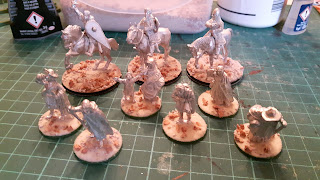 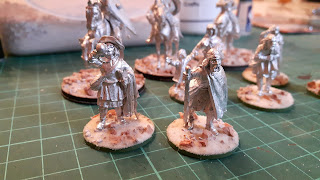 I really enjoy basing my miniatures.  It's the excitement of seeing something you've planned and dreamed about coming true on your workstation in front of your eyes.  For me, it's laden with the promise of potential, the anticipation of painting and the guarantee of great gaming sessions in the future. 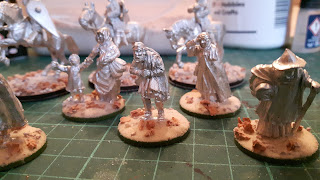 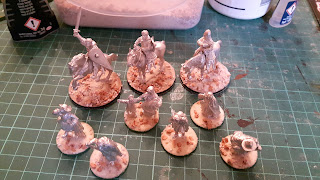 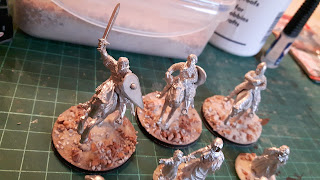 I always base my models before painting as it saves messing up the paint job. 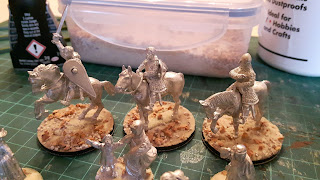 I've also begun painting the Sheriff's men.  Here's a couple of photographs of two of them, ready for the flock to be applied to their bases. 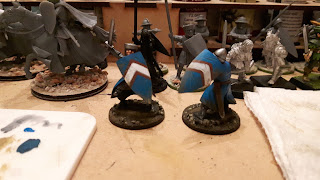 You can see I've followed my passion for Robin of Sherwood, both in the colour scheme and in adding some dirt and dents in the shields. 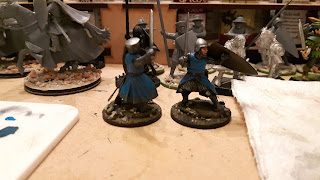 As always, thanks for stopping by!
Labels: Blood Eagle Craig Cartmell Perry Miniatures Robin of Sherwood The Ministry of Gentlemanly Warfare