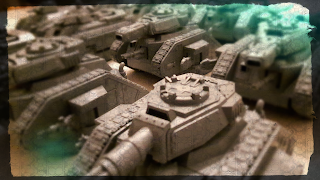 Talk about starting out in style!  I'm in an absolute state of shock and awe.  For as long as they've been available, I've wanted to field an Imperial Guard army.  Even when their name changed to Astra Militarum, my passion did not abate.  Of course, the greatest barrier to this ever happening was twofold.  First, the sheer cost of such a project.  You need serious cash and commitment to purchase, paint and finally field the Astra Militarum.  Second, I'd long grown disengaged by 40K.  I lost interest in the rush of new editions and codexes that did little to alter the game and required endless expense (see my first objection above).  As a result, this Rogue trader had to bid a sad farewell to the game I had followed since the first marine appeared in the 80's.  But with the arrival of 8th Edition, I'm back!
And when my Ultramarines were dusted off and enjoyed their first game in at least five years, I began to talk about all the lovely stuff I'd like to get.  You can tell I was hooked!  Suddenly I was looking out boxes of miniatures that had never been made, and finding myself contemplating making armies for them at last.

And, naturally, I began to talk about how this could finally be the time that I fulfil my dream of fielding a Cadian force.  And then the miracles began.  I manage to source some ridiculously cheap vehicles.  Admittedly they had already been assembled.  And yes, they were coming as is without sprues.  What has happened has been unbelievable.  I can't even begin to find superlatives that express the delight all this is causing.  Why?  Well look at this lot: 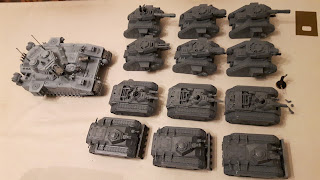 I know!  This is the stuff dreams are made of.  This doesn't happen.  Certainly not to someone like me anyway. 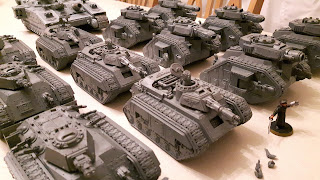 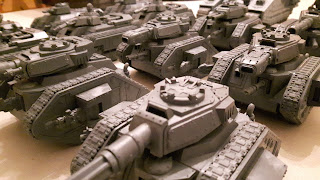 In all the years I'd been toying with the idea, I hadn't got any further than a single Leman Russ (yup, that's right, I have seven now!!!!!!!!!!!!!!!), a Valkyrie, a Commissar (which appears to have gone AWOL), three sanctioned psykers and a unit of Kasrkin. That's it.

Ooh, I also managed to get a replacement Commissar! 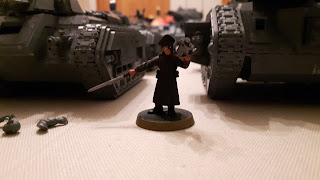 I'm utterly staggered and bewildered to have all these. 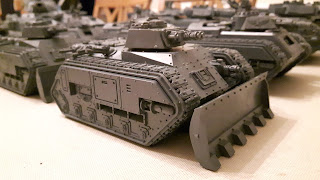 Just look at that Baneblade! 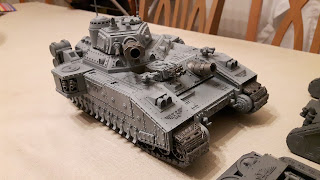 Ooh, there's much fun to be had here! 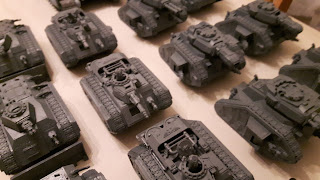 Sadly, some of the crew were in need of some TLC. 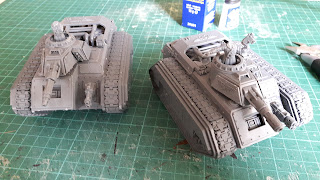 And I'll need to do a little cleaning up of the tanks themselves.  This is nothing to worry about.  I often miss mould lines when I'm all excited to build a new kit anyway. 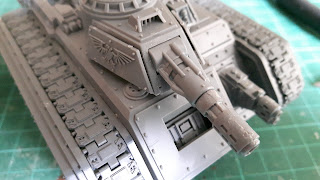 Any problems are minor blemishes that can easily be removed. 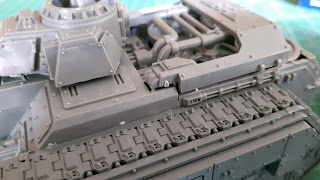 So yesterday I started the repair work.  I managed to get this guardsman a pair of arms.  I'll have to get a spare head from some guardsmen frames, all being well... 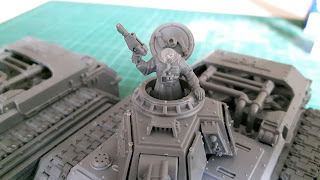 And this one got his right arm repositioned and his head stuck back on. 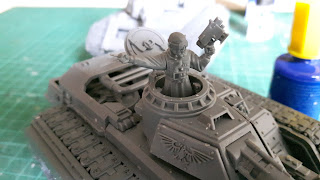 I decided to start on this Leman Russ Punisher with Gatling cannon and Heavy Bolters. 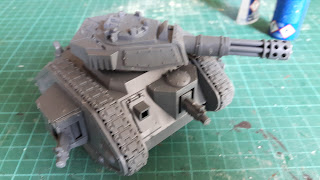 After some work tidying up the model, I was left with this lovely shiny new toy to paint. 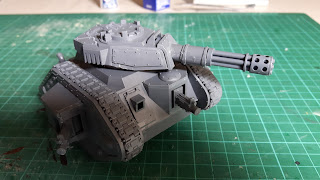 How that progresses with the subject of my next post!
Labels: 40K 8th Edition Astra Militarum Cadia Stands! Imperial Guard Warhammer 40K