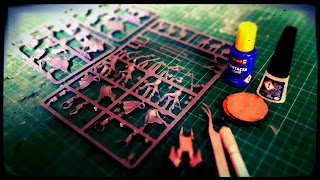 If you've ever played the excellent Blood Eagle, you'll know that at some point in your gaming you'll need some miniature to represent 'The Authorities'.  These troops generally turn up part way into the game and bash the nearest heads together in an attempt to return some semblance of order.  Now, as you probably know, I've started putting together some miniatures to represent Robin Hood and his Merry Men for Blood Eagle.  And that means I need some suitable authorities.

Now, as I had used some of Fireforge Miniatures' Teutonic Infantry to represent the Sheriff's men, I turned once again to the same range for inspiration.  And I confess I found it in their Teutonic Mounted Knights.  So I went ahead and ordered an individual sprue from eBay. This is what came in the post a few days later... 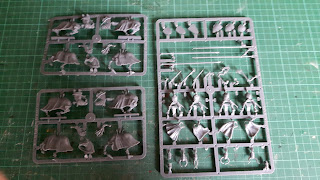 It was at this point that I noticed the helmets.  These are definitely Teutonic.  Nothing at all like their Teutonic Infantry. I hadn't noticed that when I made my decision to buy them.  This began to pose a problem.  Which wasn't the only issue I had with the sprue on closer inspection. 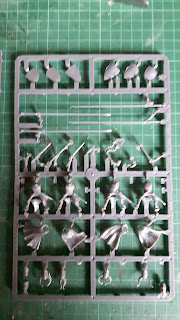 You see, although the Knights frame clearly has four knights on it, the frame only provides three left arms. That's right. Three. I can only assume that the necessary missing arms are found on another frame that comes with the full set. Quite why this would be the case escapes me just now, but there you go. The dangers of buying individual frames rather than the whole boxed set. You may also notice the spaces where items have been clipped from the sprue before sending it to me. These are probably missing from one of the other frames. This makes no sense to me whatsoever, but Fireforge have obviously got a good reason for it. If they'do like to drop me a line and explain why, I'd be delighted to hear it. Thankfully I still have the left overs on my frame of Infantry so I do have a spare left arm I can use. 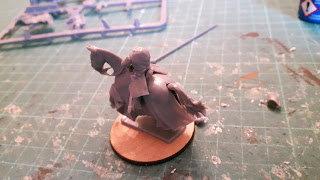 I began assembling the miniatures and I have to say they go together very nicely save for a few caveats. The horses are a bit of a faff, reminiscent of the old Bretonnian knights of WFB fame. The tail is separate to the two halves of the body and needs to be sandwiched between them. It has a habit of not staying where you want it to until the two halves come together. When you do get it all in place, you have the opportunity for some final adjustments to the tail position.  But as far as I can see, there's no way to make the two sides of the saddle join together properly, and you have a small gap across the length of the join. Milliput will need to make an appearance. 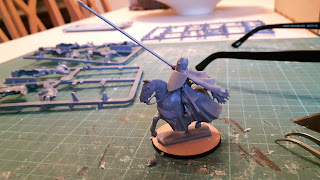 It's also worth mentioning that the helmets can be a bit of a pest. Now, they quite rightly have a section that protrudes below the neck line they are glued on to. And this looks great.  Until you decide to add one of those fancy separate cloaks that is. Now, maybe I'm not positioning the cloak correctly, but when I made the first miniature, the cloak made the Knight lift his head about 75 degrees.  This is great if you want your little plastic men to look up at your opponent during the game. But if you want him to look at the miniature he's currently charging against, the effect is not so good...

So after a little repositioning, here's the first of my knights. I really like the look of him, but that cloak is going to get right in the way of painting the saddle. Trust me to stick the Knight in place during the build. Sigh. 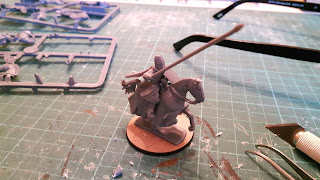 And here you can see the second knight completed. He's not stuck in the saddle, although I see no reason why he shouldn't be. I didn't put the cloak on this one. This is because I couldn't get a cloak to fit with the sword arm I used.  Either I've lost all semblance of ability to make models after thirty odd years, or these parts just don't like each other. 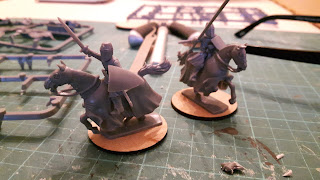 One thing I'm really excited about are the bases. I know that sounds lame to most people, but I've wanted to mount cavalry figures on circular bases for a long time. I really like round bases. I use them as standard on all my models now. This is so I can use them individually for skirmish gaming and then put them into sabot bases for larger scale rule systems. Truth be told, it's not very often I get to use mounted troops. I've been unsure what to do for my Napoleonics for Sharp Practice 2. I so want to mount them on round bases, but if I do that, I'll not be able to use them in larger battles as the bases will place them too far apart. At least that's not a problem here. These will be for skirmish gaming only. So out come some 40mm mdf bases and I'm a very happy man indeed!

Of course, looking at the models, I have to admit they don't look like the sheriff's men, no matter how nice they are. They're too well equipped. No matter, I thought. I know exactly what to do. Do you remember the episode of Robin of Sherwood entitled 'Seven Poor Knights from Acre'? It told the tale of some wandering knights who became the bane of both Robin and the Sheriff. Sounds like the perfect solution to my problem. Except that I'll be making just four. Otherwise they'll be too powerful.

And with all that faffing and thinking done, it's time to get on with making the remaining figures!