Getting out of the city had begun as a cautious journey, constantly slowing down to swerve around abandoned, crashed and burned out wrecks of vehicles.  Gus soon discovered the trick was to stay focused, slowing enough to turn safely whilst picking up speeds as soon as possible to avoid all the Zeds the noise of their engines were attracting.  Of course, this also provided perfect target practice. As they left the city behind them, the crowds of Zeds began to thin.  Once they were on the interstate, the road was pretty much clear.

They had expected the road to be blocked with the detritus of a mass exodus.  But the apocalypse had clearly struck with no warning whatsoever.  There were no long queues of abandoned vehicles. Fears that they were being lulled into a false sense of security acted as testament to the stress they had been under.  But as the sun appeared from behind dark clouds, they all began to do something they had forgotten was supposed to be a normal part of life.  They began to relax.

After the had been driving for a few hours, they saw a sign pointing to a Ranch.  The decided to explore the area, hoping to find somewhere safe to hole up for a while.

The dirt road track took then through open woodland until the trees began to thin out.  As they did so, they saw a stable appear on their right.  A collection of labourers' huts stood on the other side of the road.  Beyond the stable they could see what appeared to be the Ranch House itself. 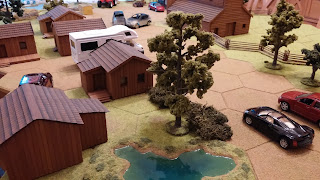 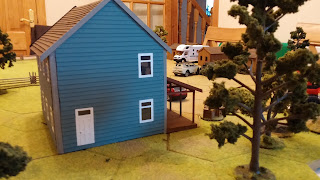 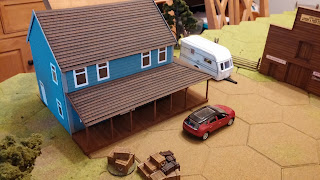 The road ahead was blocked by two vehicles that had crashed and burned.  Gus and Rick slowed their cars and cam to a halt parallel to each other.  It would be best to approach on foot. 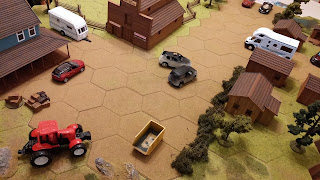 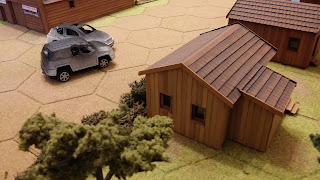 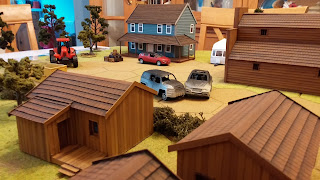 We set up our survivors around our vehicles and rolled to see how many Zeds were on the board at the start of the game. 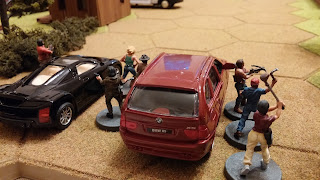 And to be honest, this was a bit of a shock to the system.  We decided to place the Zeds 24" from the starting point of the models, rather than move them 8" into the board and then place the Zeds 12" away.  But in the early stages of the apocalypse, the ZAL is only 1 in a rural district, rather than the 6 we had become accustomed to in the city.  So we rolled 1D6 and added 1.  Net result, 4.  Rolling for their location, wediscovered two Zeds to our left: 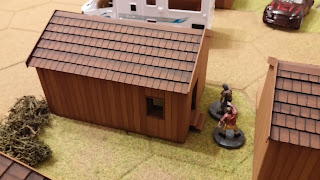 One Zed in the centre of the board. 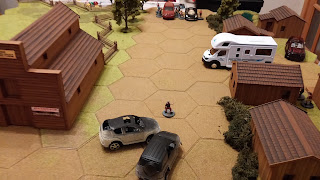 And one to our right, meandering across the stable field. 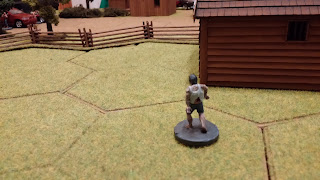 Aware of the lack of birdsong, our survivors moved cautiously along the dirt track.  Daryl fired at the Zed in the field, knocking it to the ground but not fatally wounding it. 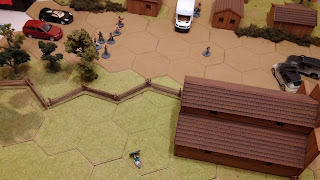 The Zeds shambled their way towards the survivors, causing them to slow down and wait to see what happened.  Daryl fired and missed.  Rick decided it was time to shoot them before they got too close. He let rip with his assault rifle and took down two of them.  We looked with concern at the ZAL chart to see what chance the gunfire would have of attracting more Zeds.  In a rural area it was only on a D6 roll of a 6.  Three shots fired meant three D6 were rolled.  And not a single 6 came up.  Buoyed on by this revelation, Gus aimed his rifle at the the remaining Zed in front of them and let rip.  Three shots splattered the Zed into red mist.  Rolling 3D6, Gus managed to roll a 6 and a Zed was attracted.  The location dice put it 12" to their front.  It had heard their shots and managed to crawl out from one of the wrecked cars. 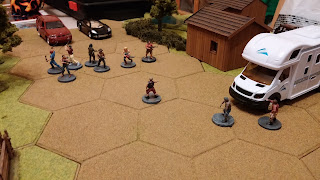 As Gus and Chantelle dashed past it, Gus turned and fired, bringing it crashing to the ground.  No Zeds were attracted by the gunfire.  This was disconcerting.  We'd been in similar fixes in the city and it had cost us members of our gangs.  This was turning out to be a walk in the part...almost. 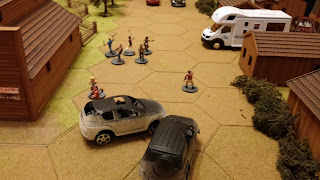 With the activation dice again in our favour, Gus and Chantelle made it to the Ranch. 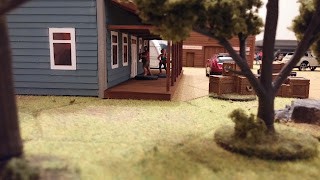 They cautiously opened the door and stepped inside. 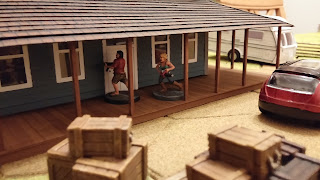 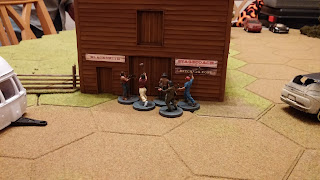 Gus and Chantelle were amazed to discover the Ranch was entirely unoccupied.  It might just be the perfect place to hole up and wait for the apocalypse to pass...

Meanwhile, Rick, Daryl and Tiger stepped into the Stable and discovered survivors!  Yes, you read that correctly!  They found survivors!  Not Zeds!  Now that doesn't happen very often, does it?  We then used a deck of cards to generate our characters.  I put my most recently painted survivor on the table, a crowbar wielding gent in an orange overall.  The second figure had to be our FBI looking dude with revolver and shades.  I ended up with a criminal with Rep 4 and the Transporter ability.  This ability makes him a very good driver.  We quickly named him Diesel, easily understanding why he's been remanded into the custody of the FBI.  Agent Cooper ended up with a Rep of 5, the Runt ability which means he fights with -1 Rep, and a little asterisk.  We looked up what this meant, and were delighted to discover it meant he had body armour.

Once again the rules and random charts allow us to piece together the backstory of these new survivors.  It's a bloomin' good job they decided to cooperate rather than fight, as we quickly became attached to this young FBI agent and his criminal companion.  Something had made them hide out in the Stable, but a check for loot found nothing. 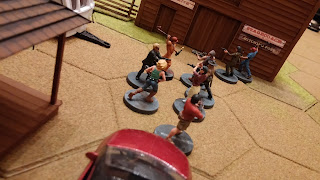 So they decided to check out the caravan.  Agent Cooper had decided to take the initiative.  Rick must have allowed him to do so on account of his rank, although Gus thought he was just helping the young man prove his mettle.  He opened the door and we rolled to see what would be encountered.  Cooper peered inside.  It was the chance of a Zed!  We rolled 1D6, wondering if it would come up with the six and give us a Zed.  It didn't.  So Cooper jumped out of the skin as he opened the caravan door and an ironing board fell out!  That's what we reckon happened anyway. 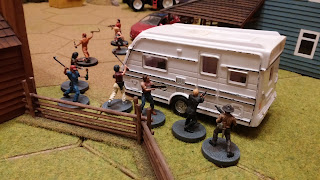 We then went off to search the farm hands' accommodation.  Time and again they proved to be empty.  Our looting generated an awful amount of spare ammo.  One scare happened as Agent Cooper opened the door of one of the houses... 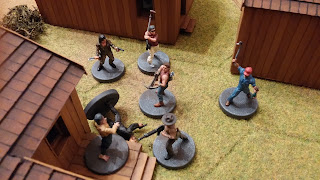 He disturbed a hiding Zed which launched an attack on Cooper, knocking him to the ground and out of the fight. Rick quickly jumped to his rescue, clubbing down the Zed with his rifle butt, spinning it round and blasting its brains out with the business end of the weapon. 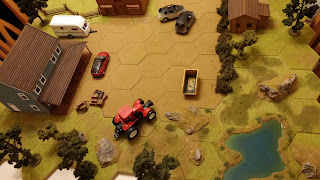 With the immediate area secure, we needed to check on our downed agent.  He passed all his dice to see how badly injured he was, thanks in no small part to the medical supplies we had picked up in the city.  He returned to the game with full health and no reduction to his Rep.  Of course we needed to make sure he hadn't been infected.  With a Rep of 5, he'd only need a 2+ on 1D6 to make the safe score of 7+.  Knowing how bad 2+ rolls can be for us, we held our breath as the dice was rolled.  A three!  Safe!

And so we leave our survivors in the relative safety of the Ranch and afford them a little rest.  Once they make some barricades, that is!  After all, we have summer holidays ahead, so the next few weeks will be quiet ones for Gus, Chantelle, Diesel, Rick, Daryl, Tiger, Ripley, Duke and Agent Cooper.