Our last game was a devastating encounter.  I still get nightmares just thinking about it.  First The Bazinator was clawed to the ground by a horde of Zeds.  Kendra saw the event and went loopy, eventually walking off into the distance to become a Zedsnack.  Even Alec was chomped to death whilst Gus was rescuing the downed Christie. Thanks to some unfortunate dice rolling (who'd have thunk?) we discovered she had been infected and as the fever rendered her unconscious, she was dragged from the Diner by Gus who shot her brains out before she turned Zed.

And so episode fourteen begins with my gang down to the ever-reliable Gus and the rather well-endowed Chantelle.

Rick, on the other hand, hadn't lost a single member of his gang.  Daryl, Duke, Ripley and Tiger were all doing well, although everyone had decided they were getting sick fed up of Blondie, the suited and shaded executive who wielded his Magnum and acted like he was God's gift.  Which he clearly isn't.

This unlikely group of survivors had been holed up in the diner for two days, hoping the horde of Zeds they had fought off would gradually dissipate.  There had been no other activity of note within the survivor's earshot, but this hadn't made any appreciable difference in the number of Zeds they could see wandering aimlessly around them.  They were perfectly safe inside the Diner, and there was plenty of food.  Rick and Gus heard the others talking about activity in the buildings across the street.  They hoped it might be some more survivors.  Gus felt sure it would just be more Zeds, but they both knew the signs of cabin fever that were doing the rounds.  So they decided to have a foray.  Anything was better than listening to all that garbage emanating from Blondie's lips...

We rolled the now-obligatory 2D6+6 to determine the number of Zeds on the board at the start of the game.  We rolled a five and a four.  Joyous.  We rolled for location of these Zeds which would be setup 24" away from the door of the Diner.  That gave us a group of five to the right of the door... 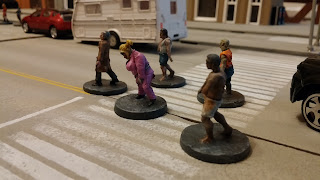 ...four directly in front of the diner... 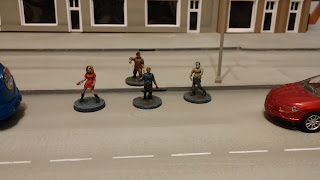 ...and the remaining six over to the left of the front door. 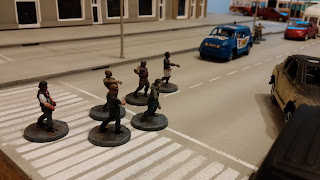 We moved ourselves 8" into the board, Gus taking up a covering position over the hood of a nearby 4x4.  Chantelle was keeping close to him, no doubt still shrugging off the memory of The Bazinator's untimely demise a couple of days previously.  Rick and Daryl led the others slightly wider, hoping to make a dash across the street. 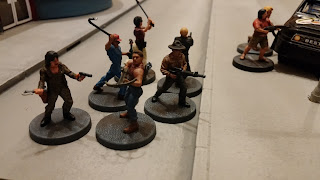 At this point, it looked quite hopeful. 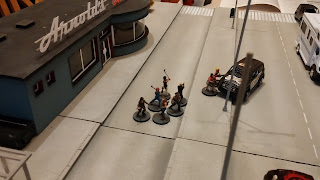 It should be quite easy to do this. 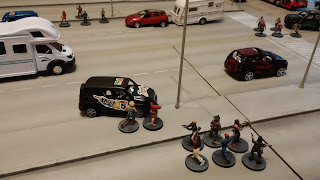 And while Rick and Daryl made their way forwards, urging Gus to only shoot if absolutely necessary... 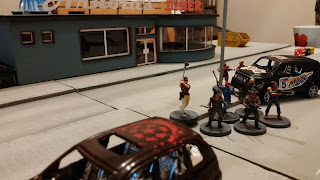 ...the Zeds to our left walked straight into a couple of crashed cars.  Being so close to the edge of the board, we rolled the dice to see which way they would turn, hoping they'd exit the board.  Odds, they'd go left, heading towards the centre of the road.  Even, they'd turn right and hopefully exit the board, making our foray a little easier. 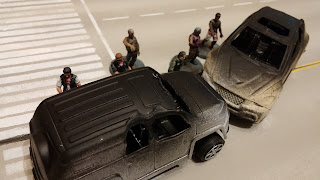 Two went right and exited.  the other four began heading for the space our intrepid survivors were heading for.  Daryl made some wonderful shots and was taking out a Zed each turn.  Using his crossbow meant that no more Zeds were being attracted.  And as the area thinned out, Rick ordered his gang to make a dash across the street.  Duke charged into the nearest Zed, allowing Daryl, Blondie and Ripley to cover most of the necessary distance.  Unfortunately, Tiger wouldn't move.  Rick had no choice but to hang back in the hope of rallying her next turn. 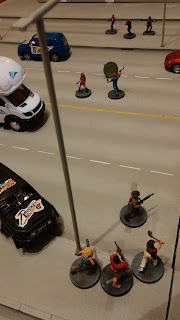 Duke knocked the Zed to the ground, but was unable to OD it.

It was at this point that the Activation Dice decided to make thinks interesting.  Or, to put it another way, the bloomin' things turned against us, allowing the Zeds to activate and leave us unable to do anything other than take reaction checks.  And boy were they a lot of them coming.  Just look at the next photo. 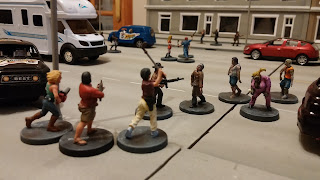 Yup, there's a crowd of Zeds swarming towards Rick, Tiger, Gus and Chantelle.  Oh, and don't forget the Zed that just got up while Duke was being charged by the undead Sarah Michelle Geller. 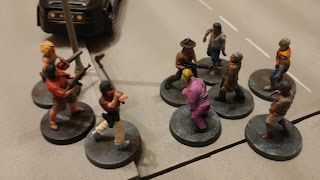 And soon Duke was being swamped.  He was holding them off, but he wasn't managing to take any out. 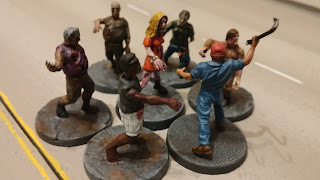 Unlike Rick, whose Reaction Check to being Charged meant that he fired off three shots into the approaching mass of living dead.  He didn't kill them, but at least they were knocked back and to the ground.  He was still attacked by two more Zeds, but after winning the round of combat, he managed to OD them with two shots.

It was at this point that Duke went down.  Rolling a 1 on 1D3 we learned that by the end of the next turn, Duke would be eaten alive.  We even left a black dice beside him to remind us of this sobering fact.  We had to get rid of the Zeds.  Daryl dispatched one with his crossbow.  "I've got this," Blondie bragged.  He let rip with his Magnum.  And missed completely.  He'd have been more dangerous with the ice lolly...

Gus joined in with the shooting, adding a further three shots.  It was enough to take out the Zeds and spare Duke in time.  But he'd need rescuing. 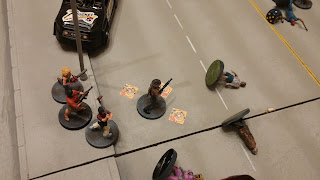 Of course, that amount of fire attracted more Zeds.  And unfortunately they were coming from behind as well as in front. 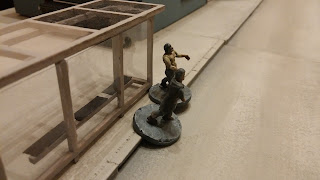 Oh, and before I forget, Blondie had never seen someone become food for a Zed.  This caused a Sanity check.  Which Blondie failed miserably.  He turned and ran to the building, cowering like a wimp.  He'd need taken in hand if he was to return to the fight.  The big picture at this point looked like this. 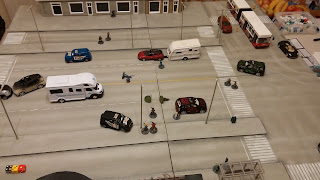 Tiger stepped forwards and used her iron to good effect, battering the brains out of a prone Zed. She  and Rick then legged it across the table to pick up Duke between them. 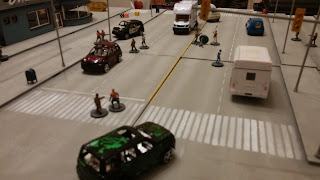 Gus and Chantelle began to follow them, but the Run check didn't go to well for Chantelle and they didn't get very far.  The undead Willow attached Gus, but was soon dispatched. 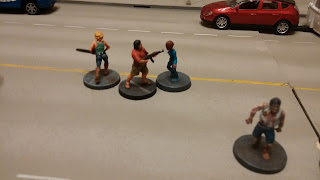 Meanwhile, covered by Ripley and Daryl, Rick and Tiger carried the prostrate Duke across the road to safety. 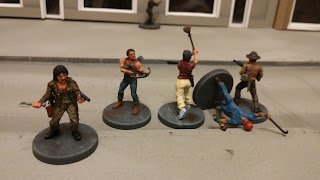 Thankfully the Activation Dice allowed Gus and Chantelle to activate. 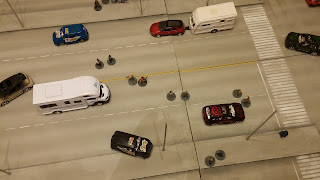 They soon joined the others over by the building.  Blondie was still looking the wrong way, hoping it would all just go away if he closed his eyes long enough. 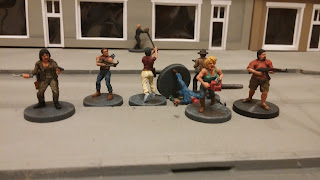 And then the Zeds began closing in... 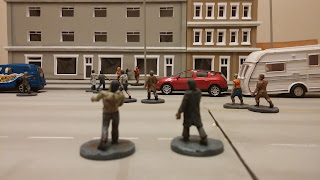 Rick, Daryl, Ripley, Tiger and the unconscious Duke went onto the ground floor retail store.  They left Blondie gibbering incomprehensibly outside.  Unfortunately they found Zeds inside.  The chance of us rescuing any survivors seemed nigh on impossible by this point.  After dispatching them, the found petrol for their car, medical supplies, a machettee and some assault rifle ammunition.  So it wasn't all bad then.

It was at this point that Gus and Chantelle decided they should see if they could find any survivors as well, and entered the next building. We rolled to see if there were survivors or Zeds in the building. And would you guess it, there were Zeds.

I won't bore you with the details, but suffice to say the ensuing combat entailed repeated standoff's, an inability to hit anything with the chainsaw; a jammy series of 1's rolled by the Zeds who wouldn't hit Chantelle on anything other than a 1; a chainsaw stall; Gus knocked down by two Zeds and all the while Rick's lot meandering safely back to their SUV. Because there was absolutely no way they were trying to get back to the diner. 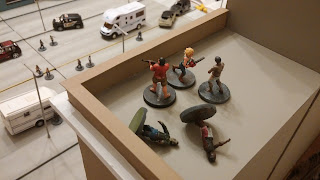 Give them their due, though. Rick and Daryl did stay on watch and shoot up any Zeds that came near us. They even bundled Blondie into the SUV. 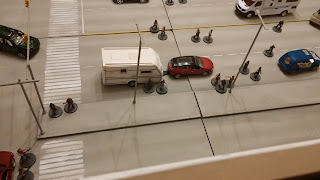 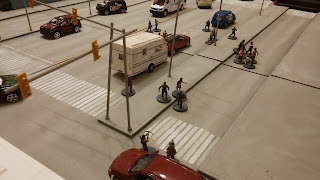 Finally, with the chainsaw stalled and no time to start it again, Chantelle ditched it in favour of her baseball bat. Ruhsing to Gus' rescue, she took out one of his assailants, leaving Gus to finish off the other and them both to then turn on the remaining Zed. 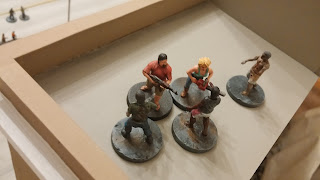 All the while Daryl was proving to be an excellent marksman, taking down Zeds and making sure Gus and Chantelle could make a clear run when the time eventually came. 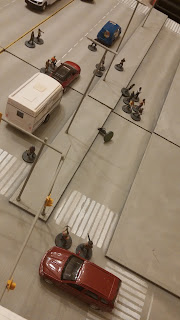 And look, here they come at last. They didn't even stop to search the building. They just wanted out. A simple dash round the bus to the sports car and our intrepid survivors were away. There was no time to try and find diesel for TheBendyBuz.  It would have to be left behind.  They had managed to escape, but the true cost was still to be seen. 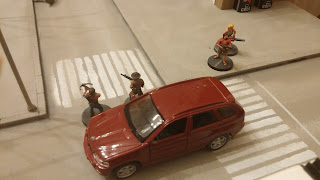 Gus had been knocked down by a Zed and needed to see if he'd turn. With a Rep of 6, he'd need to add a 1D6 roll and score a  score a 7+. The realization he couldn't therefore fail was a great relief to me!

It wasn't the same for Blondie. We needed to roll on the Crazy About My Job table. And it wasn't good as he first passed two dice, then failed every other roll he had to make. The result was he had become a gibbering idiot who needed round the clock care. Daryl really couldn't be bothered with the effort that would entail, so he opened the door of their speeding car and kicked him out.

Thankfully Duke appeared to have survived his wounds and rolled high enough not to turn into a Zed. He returns to full health for the next game, though has his Rep reduced by -1 to 2.

One thing's for certain: if they are to survive, they really need to get out of the city!