Buoyed up with more than doubling the size of our posse of survivors in the last game, we were keen to find out what would happen next with the Bazinator at the helm of their new method of transportation: The Bendy Bus.  It might not be the fastest vehicle out of the garage, but boy is she spacious.  According to the rules, she can safely accommodate up to 40 passengers.  That's not a bunch of survivors, that's a whole colony, that!

The task before Rick, Gus and the gangs was simple.  Drive the bus through the city until they found a decent retail store.  Then all they had to do was exit the bus, dash inside, defeat any Zeds they meet, fill up their backpacks with stuff, and make a dash back to the bus and exit the board at the opposite edge.

Playing on a 4'x4' surface shouldn't make that too dangerous, should it?  Well, as this was to be the last session in the city, we decided to make it worth the effort.  We placed TheBendyBuz as I decided to name it with its back wheels just on the gaming surface.  This, you understand, meant it was already more than a quarter of the way across the table.  Using the front of it as a starting point, we then decided to roll 2D6 to determine how many Zeds were on the board.  These would be placed 24" away from the TheBendyBuz.  And lo and behold, we managed to roll 11.  This was going to be fun.
We then decided that our conveyance would be creating a lot of noise, and therefore would require us to roll six dice each turn.  A roll of 4+ would mean a Zed would appear.  And would you Adam & Eve it, we rolled 5 Zeds.  Here's how the board looked ready for us to roll the Activation Dice. 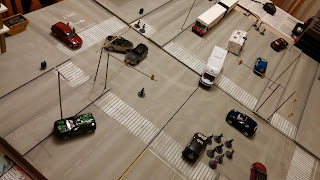 Scary stuff.  It was at this point I discovered we had decided to leave the Bus engine running to help us get away quickly.  My protestations about it generating upto 6 Zeds each turn fell on deaf ears.  No doubt they couldn't hear me OVER THE NOISE OF THE FREAKIN' ENGINE!!!!! 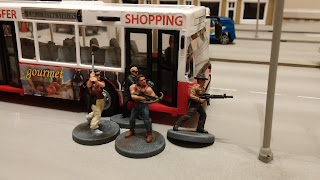 The Activation Roll meant that Rick, Daryl, Blondie and Tiger were first out of TheBendyBuz.  Our target was the door of the building you can see in the background of the above photo. 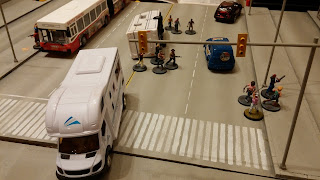 By the time we activated the Zeds had begun moving.  Gus stayed at the door and fired on the nearest threat.  (It was sooo nice to play a game with his new Rep of 6.  I was actually managing to shoot stuff, although admittedly he was only managing at first to knock them down rather than OD them.)  Meanwhile, Bazinator and his lovergirl Chantelle made a dash for the retail store, closely followed by Christie and Kendra (De Wamp-iyr Slay-ah) who was actually managing to move along, despite having a Rep of only 1. 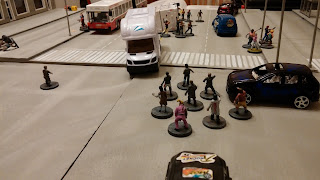 Oh, and talking of Rep 1's, no, we hadn't forgotten about poor old Alec.  As usual, he was in base to base contact with Gus, waving his cricket bat about his head in usual pointless style.  Surprisingly, he appeared to have misplaced the pair of y-fronts he's been wearing on his head  And last time we looked, there was only a solitary pencil up one of his nostrils.  He hadn't forgotten to shout "WIBBLE" at the most inappropriate times though, and was destined to attract a new Zed each turn on a 4+.  And as we were about to see, that would happen a lot in this game! 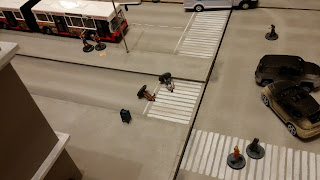 Ooh look!  That'll be Gus shooting Zeds, knocking them down and not killing them.  Again. 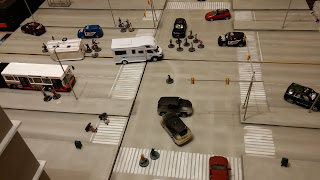 Those Zeds were starting to get a little too close for comfort! 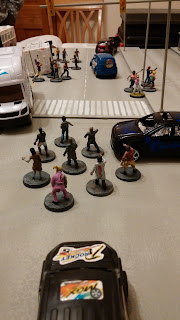 And things weren't looking too great for Gus who by now had realised he was going to have to single-handedly guard TheBendyBuz.  At least he had Alec for company.  No, wait.  That's no help at all... 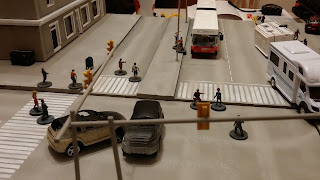 Oh my, the Zeds activated before us! 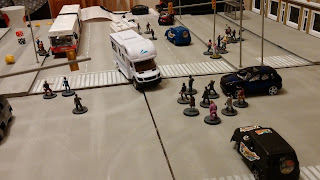 But at least Rick, Daryl, Blondie and Tiger made it into the retail store.  We put them on the balcony of the building.  Just because. 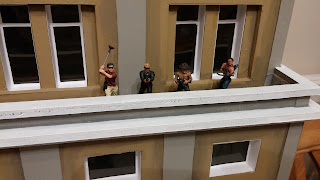 At least this way they could take a look at the drama unfolding below... 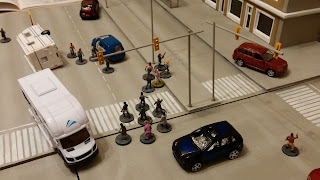 Because it was getting rather dangerous sitting all duck-like beside TheBendyBuz. 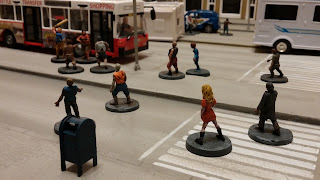 Thankfully Gus was managing to stem the tide.  But each time he fired, more Zeds were appearing. 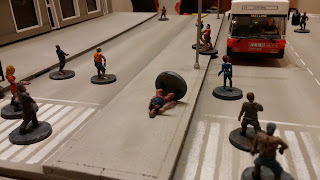 So with the way clear, Gus dragged himself onto the roof.  Because at least this way, only 1 in 6 Zeds has the ability to climb.  This meant Gus was in the perfect place to cover the rest of them as they made their exit.  As long as Alec didn't whack him amongst his wibbling, that is. 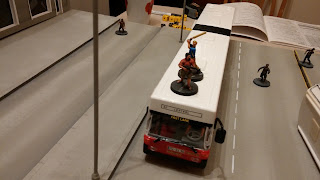 Because although it doesn't look too bad from the above angle, the view the other was wan't looking promising! 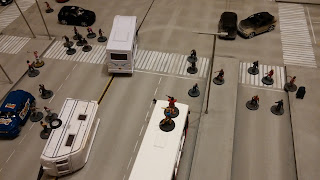 In the meantime, Rick, Daryl, Tiger and Blondie had entered the retail store, fearful of what they might discover.  We tested for activity, expecting the worst.  But then the dice did something they hardly ever do.  The Survivor dice beat the Zombie dice.  So we had two survivors.  After the Awareness Check, In Sight Check and Talk the Talk Check, we discovered that they both agreed to join us.  Awesome!  And so Rick welcomed Duke (Rep 3) and Ripley (Rep 3).

And as if that wasn't good enough, they got a heap of supplies, an extra weapon, more ammo and medical supplies, and the keys to a nice SUV parked outside.  So they dashed out to have a look. 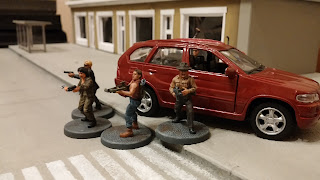 By now Christie and Kendra (DWS) were holding off the Zeds, surprisingly, and The Bazinator and Chantelle had gone inside to get more supplies. 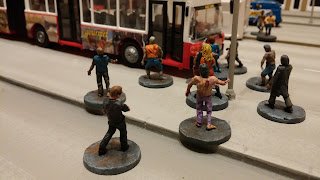 As Gus watched the plan go south as Rick and Co. were getting into that SUV, he decided to get Alec back inside the bus and be ready to go. 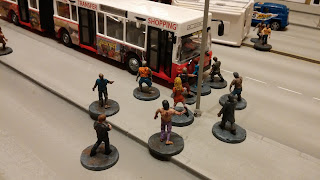 And although he didn't shoot once, there still seemed to be a lot of Zeds nearing that bus... 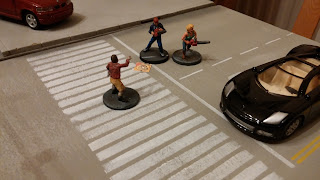 Love's young dream managed to find some more ammo, a baseball bat for Chantelle, and would you credit it, yet another set of keys.  The Bazinator's eye's widened when he realised they were for the slick black sports car.  Of course, Gus was getting very worried by now.  Because even Christie and Kendra had decided to ditch the bus in favour of the SUV. 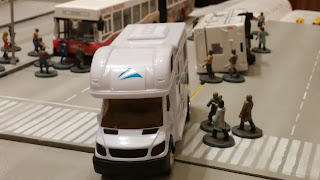 Pity the survivors liked it less than the Zeds... 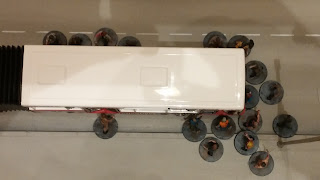 The Bazinator made a dash for the sports car.  Unfortunately Chantelle wasn't able to keep up. 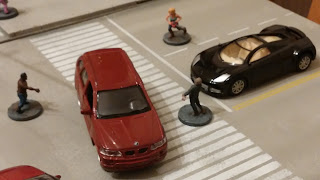 And as the SUV made a dash for safety, guns blazing to little effect from every window, the remaining Zeds went for Chantelle. 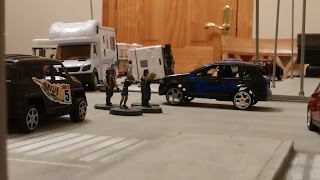 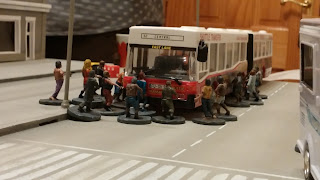 So Gus decided he'd had enough and pulled off. 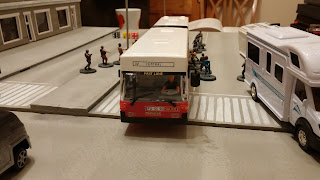 Poor Chantelle was attacked by two Zeds she pulled the rip chord and fired up the chainsaw.  She won the fight and killed one of them.  However, as both her melee dice rolled 1's, her chainsaw ran out of gas and stopped. 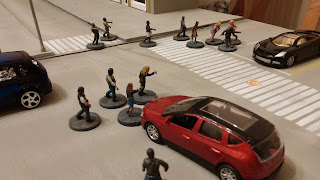 Just in time for the Zeds to activate before her, and charge her en masse. 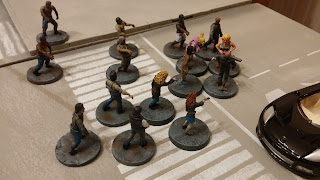 Thankfully this caused a Being Charged Check which Chantelle failed spectacularly.  She ran to the safety of the sports car and she and the Bazinator sped off the board, leaving a lot of Zeds in their rear view mirror. 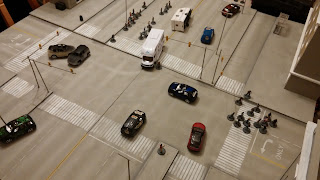 Which, to be honest by this time in the game, was probably the best place to view the critters.

Next time: road stop at the Diner!

....if I can get it made in time, that is!
Labels: 28mm All Things Zombie Modern American City Wargaming Two Hour Wargames Wargames Factory Zombie Apocalypse Wargaming