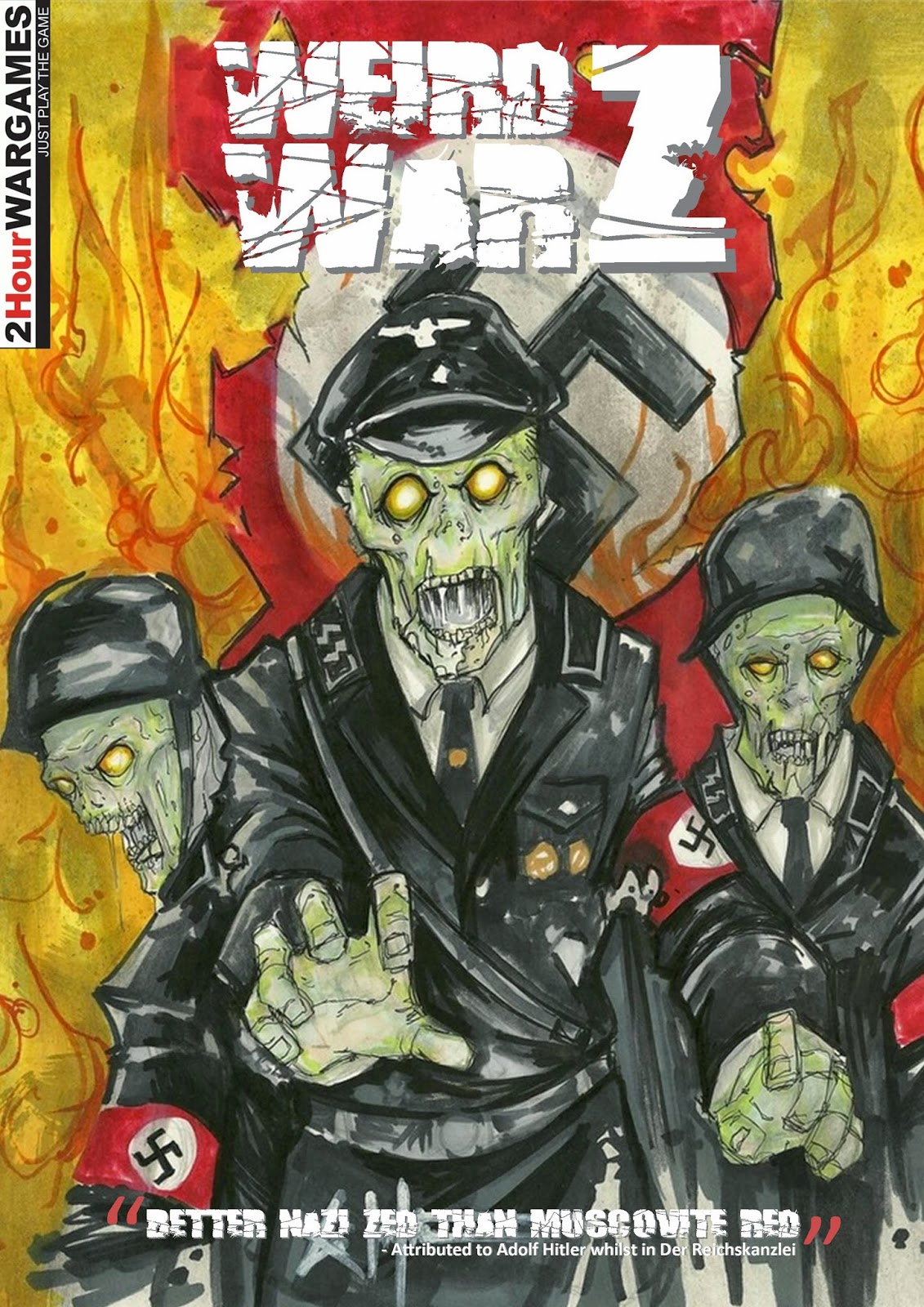 I'm delighted to announce my Weird War Z rules based on the excellent Two Hour Wargames' reaction system are completed and ready for playtesting.  And as my previous post shows, the models for this are coming along nicely.

However, the rules are nothing like the final result I had originally expected to write.  Let me explain.

When I stumbled across Studio Miniatures’ Die Verdammten, I was immediately hooked on the idea of an alternate weird war two setting for some Zombie wargaming.  This seemed doubly fortuitous as I was at the time sourcing miniatures for All Things Zombie.  2014 was shaping up to be a very good year in my gaming history!  It seemed an obvious choice to get some more miniatures (what a shame!) and simply play a second world war setting with the ATZ rules and simply add in the weapons profiles from NUTS!  What could be simpler?

The rules I have completed are an amalgamation of three sets produced by Two Hour Wargames.  Chain Reaction 3.1, the original 2005 Origins Award winning All Things Zombie, and the 2005 edition of NUTS! Yes, 2005 was another very good year for my gaming!

How did this happen?  Let me explain…

I’m a massive fan of the Two Hour Wargame reaction system.  I came across them when I decided I wanted to play a more realistic game.  I had been jaded by the IGO UGO mechanic that pervades most systems to this day.  It didn’t represent the ebb and flow of battle I had read about.  I also wanted a system that took away the absolute command and control of many rule sets.  This was why I really like the PIP system of DBA, DBM and their derivatives.

So when I found NUTS! I was immediately sold.  So too was everyone I introduced to the game in the following months.  Soon more and more THW rule sets were added to my collection.

Why then did this end up a mix of so many rulebooks?

Well, ATZ is all about surviving after the apocalypse has struck and the whole world has gone mad.  Pockets of survivors try and eke out an existence in a world dominated by Zeds.  Now, that’s fantastic, but the game mechanics don’t deliver a World War Two Setting when the apocalypse is only just beginning.  It quickly became apparent that whilst I needed a lot of ATZ rules for, well…the Zombies, I needed more of the reaction system created in NUTS! Soldiers needed to act like soldiers in 1945 and not like 21st century survivors. So many of the rules that made it into WWZ are lifted right out of NUTS!.

But not all of them.  Particularly when it came to damage.  In NUTS! You basically only have a 1 in 6 chance of causing an Obviously Dead regardless of the Impact rating of the weapon.  This will keep the game going and not in quite as bloody a manner as ATZ.  Whilst this is good, if I allowed the Pop Goes the Weasel and special Shooting at Zombies rules into WWZ  alongside the NUTS! Damage tables, it would clearly make it an awful lot easier to kill Zeds than any living troops.  Which didn’t sound either right or true to the horror genre itself.  So to keep the Zed rules in, I had to make it easier to kill humans by allowing all the ATZ damage tables in.  Admittedly this makes the game a lot more bloody, but that seems right for the setting.  As I've said before, setting is everything!

Into this mix comes CR3.1, particularly in terms of post battle REP increase or decrease.  I did this simply because I like the more streamlined approach it gives. There’s less book keeping involved.  Plus, the chance to detrimentally affect REP due to failure seemed to fit the atmosphere of this game too.

Another area of departure was the enemy reaction section.  I didn't need PEF's (Possible Enemy Forces) as this rule was catered for by the In Sight rules for encountering terrain in NUTS!  And whilst All Things Zombie gives all the necessary rules for determining the action of the Zeds in the game, it didn't explain how the various humans would react in the game.

I resolved this by adding in a number of new charts that reflected the actions of civilians, Volkssturm, Hitler Jugend, Volksgrenadiers and Heer Infantry dependant on the prior actions of the players and the varying proximity of Nazi Zeds.  CR3.1 was a great help in pulling this section of my rules together.

So the final rules are something a lot more than adding a few NUTS! weapons lists to the ATZ rulebook.  It’s been great putting it together, seeing which worked best for my specific setting.  Of course, the true test of the pudding is in the eating, and that means handing them over to my gaming group.

I'll let you know how it turns out when we get everything together to let us play it!

All that remains is for me to thank Ed Teixeira for creating such a wonderful set of rules I have been able to plunder to create my own.
Labels: All Things Zombie Alternate WWII Chain Reaction 3.1 Ed Teixeira NUTS! Weird War Two Wargaming Weird War Z