Last night saw the actual launch of our Zombie Campaign using the original 2005 Origins Award winning rules All Things Zombie from Two Hour Wargames.  You can follow the threads of my scenery making on this blog, the easiest way to do so is probably by hitting the labels tab to the right of this article and clicking "All Things Zombie".  If you want to skip straight to the back story for my gang of survivors you'll find it here: Touchdown JFK

Normally the campaign would start two years after the apocalypse struck.  However, we decided that we wanted to take it right from the outset and thereby reckoned that our adventure was beginning something like 2 days after the outbreak.   Our initial deployment can be seen in the above photograph, 8" in from opposite ends of the table.  With a ZAL of 6, our dice decided it was time to roll high with a 5, giving us 11 Zombies.  As we rolled for their location, the horror of it all began to sink in.

We were playing a Raid encounter, reckoning that our survivors were running low on food.  They needed to get into some of the buildings and try and get supplies.  Gus, Alec, Jenny and Baz decided to check out the shops while Rick, Lori, Carl and Daryl made their way towards a Police station where they hoped to stock up on some ammunition.

As if it was going to be that simple!

The activation dice did a good job of letting the Zeds put the fear up us time and again in the game.  Both groups tried to move as quietly as possible, but the Zeds kept gaining ground.  Jenny ended up taking rear guard on my gang.  Bad choice.  She only has a Rep of 3.  So as the living dead shambled in their direction, she kept firing her BAMP, spraying hot lead in their general direction, missing a lot more times than she hit them.  This of course had the wonderful effect of attracting many more Zeds than she could kill, as well as alerting those on the board to her location.  Gus' only consolation was that Baz hadn't fired up his chainsaw yet.

Meanwhile at the other end of the table, Rick, Lori, Carl and Daryl were running towards the police station.  In another unfortunate turn of events, Lori, also Rep 3, was left to face off to the Zeds honing in on their position.  She fired twice with her shotgun, missing twice.  And rolling snake eyes. Which meant she needed to change her ammo.

Alec and Gus managed to shoot the remaining Zombies on their six before everything went south.  There never were a more relieved group to enter the ground floor of the shops.  At least they were until some rolls on the encounter tables meant that they were surprised by half a dozen Zeds.  Jenny dispatched the one that appeared in front of her with her best shooting to date. ( Gotta love a roll of 1 for OD!) Alec missed the two that were on him and leveled his cricket bat for the ensuing carnage. Gus dispatched another and turned to see Baz start his chainsaw, grin at his friends,  and charge in against two Zombies.  Despite having an Impact 3 weapon, Baz failed to kill either of them.  And then lady luck packed her bags and went on holiday.  Jenny failed her In Sight check and hid as the horror of it all began to sink in.  Alec flailed wildly with his cricket bat but couldn't knock his assailants to the ground.  Gus saw Baz go down and rushed to his aid, killing one of the Zeds.  If he couldn't dispatch the other Zed next turn, Baz would be dead.

Thankfully Jenny regained her senses and helped Alec take out his two Zeds.  Gus managed to kill the last remaining Zombie, but Baz wasn't looking good.  He sent Alec and Jenny to search the building and turned his attention to Baz.  Without a medic though, things looked grim.  A roll on the "How Bad Is It, Doc?" chart meant that Baz had been killed.  There was nothing they could do, so they collected the medical supplies, food, pistol and ammo they had found.   Gus picked up Baz's chainsaw and they all rushed outside to see how the others were doing. 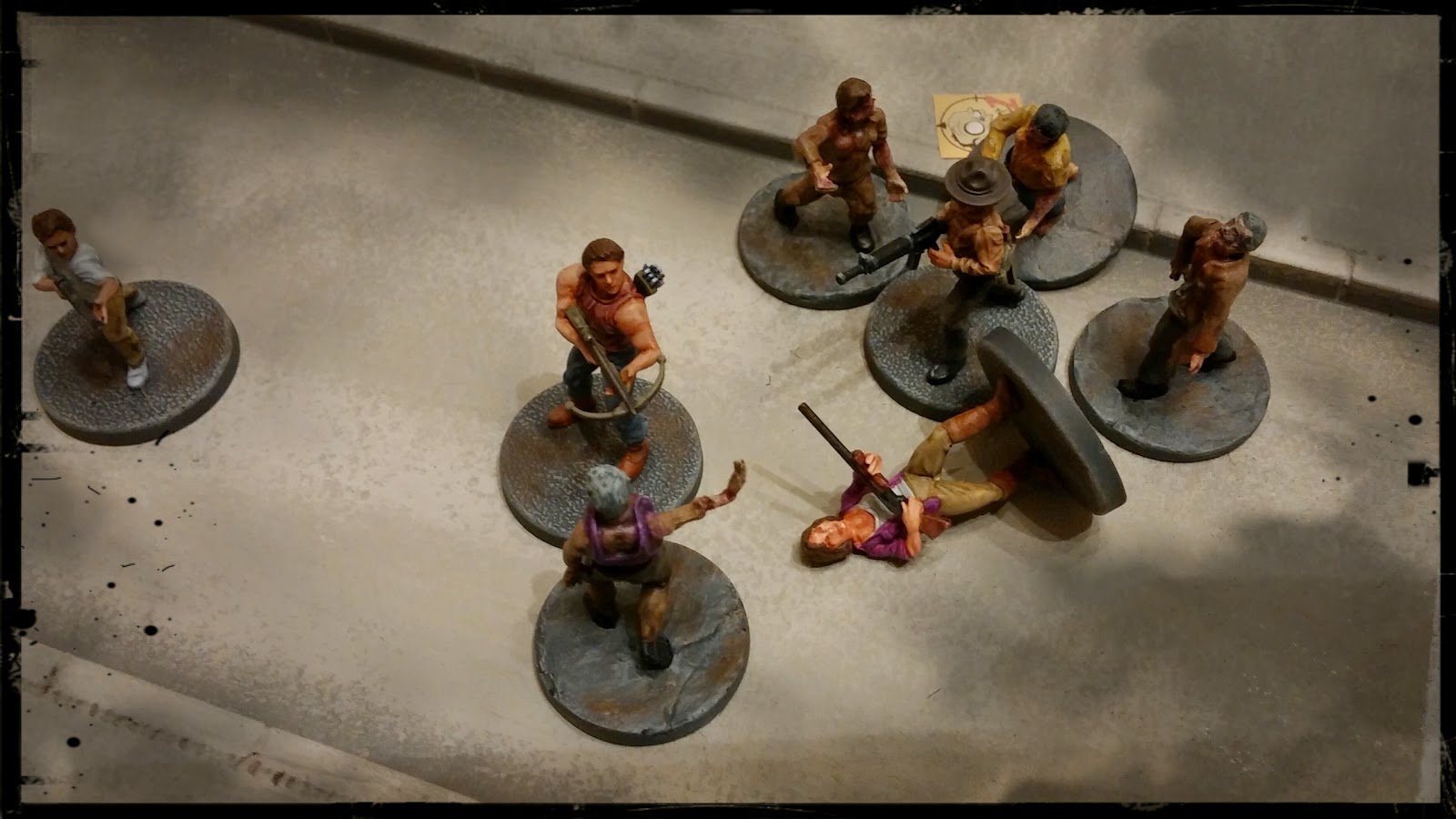 Not so good, to be honest.  Lori was down, and it was all Rick and Daryl could do to keep the Zeds from munching her.  Poor Carl had his gun trained on a lone Zed making his way towards the group.  He was out of range just now, but that wouldn't last. 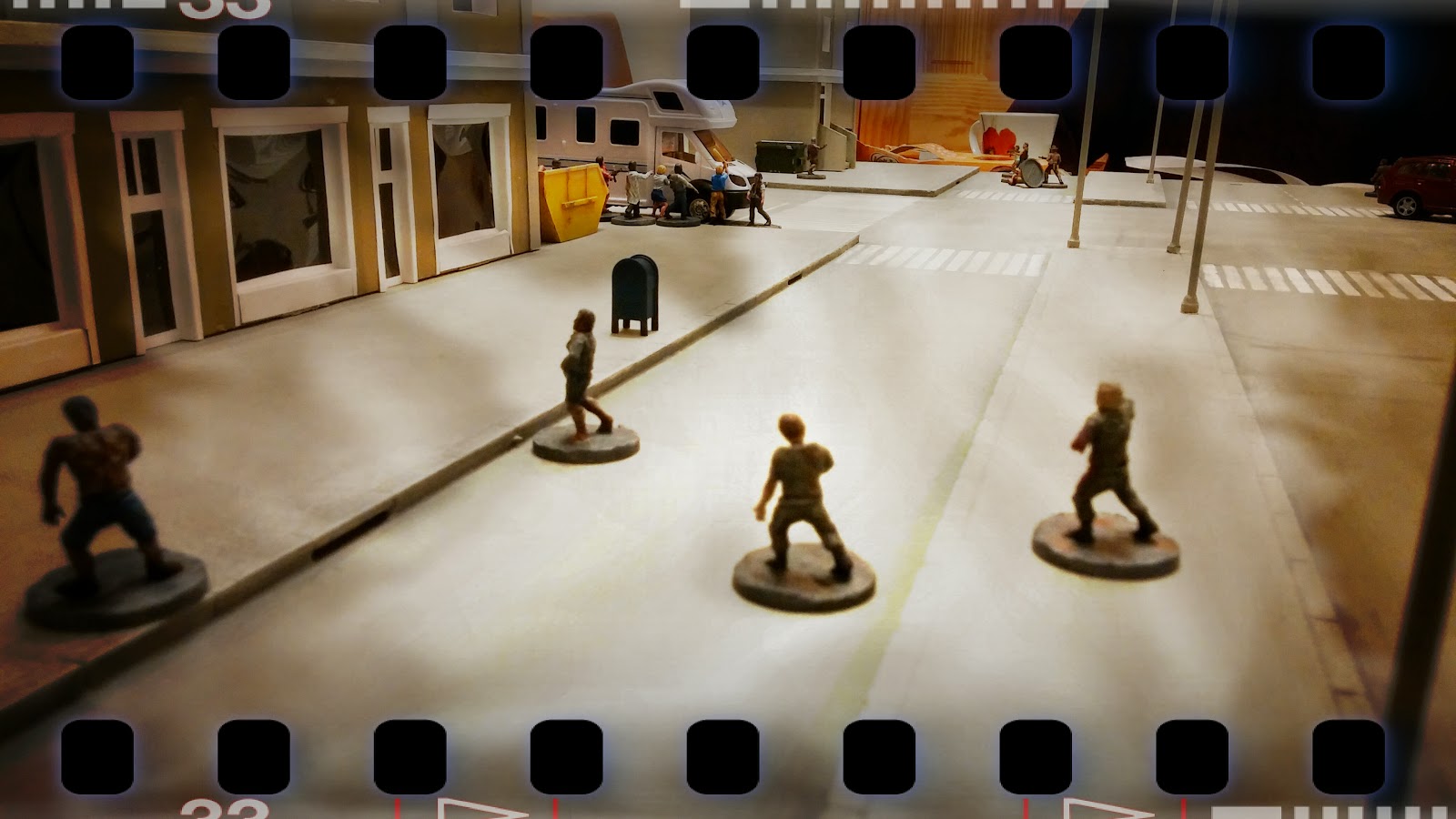 Firing off a few bursts to dispatch the gathering Zeds, Alec spotted an RV and they dashed headlong to see if it had keys.  It looked like the best way to get Lori and the rest of them out of there safely. 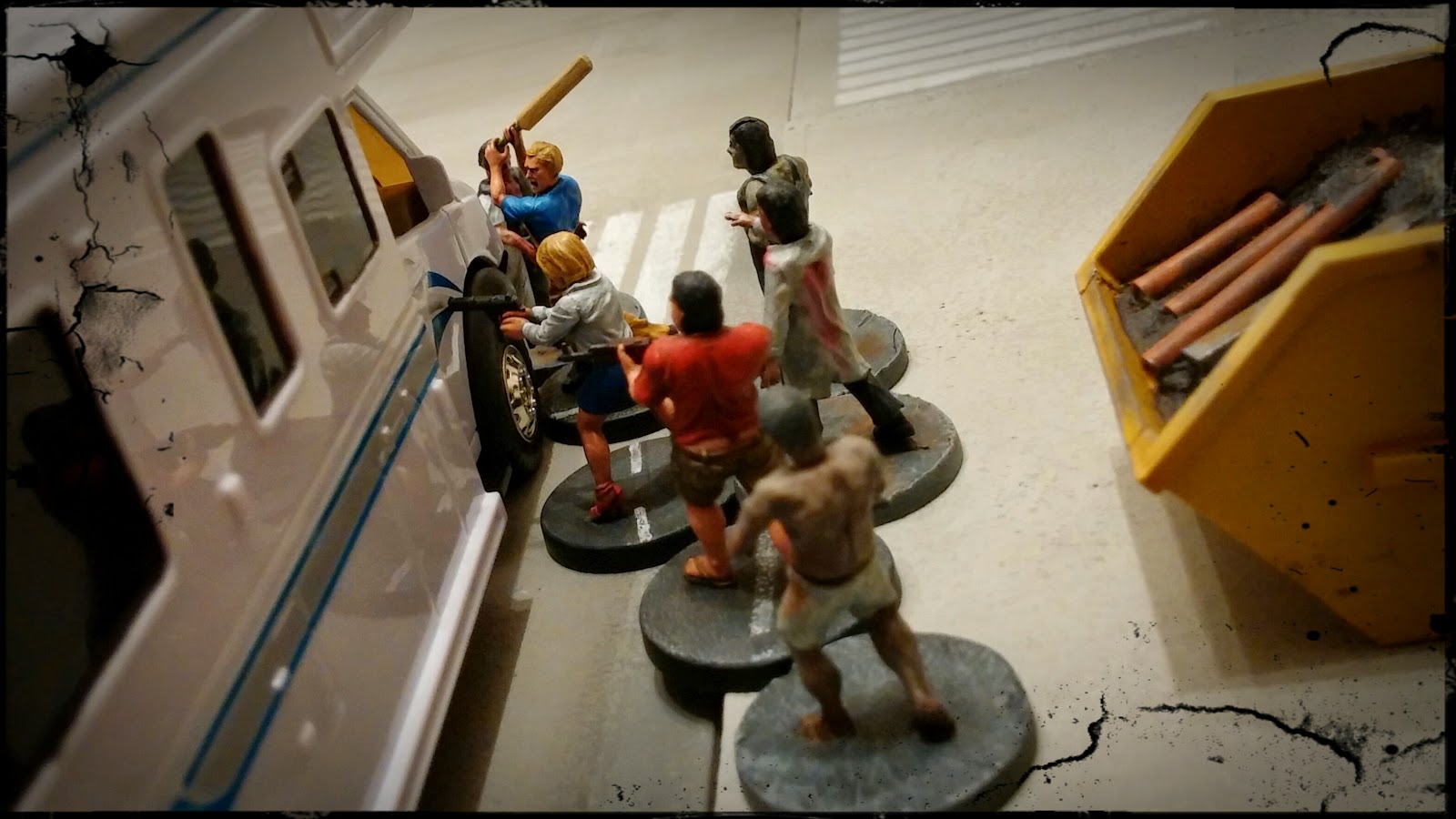 Unfortunately, as Gus, Jenny and Alec opened the RV door they were surprised by four Zombies.  It was easier to place them behind the survivors while we worked out the ensuing combat. 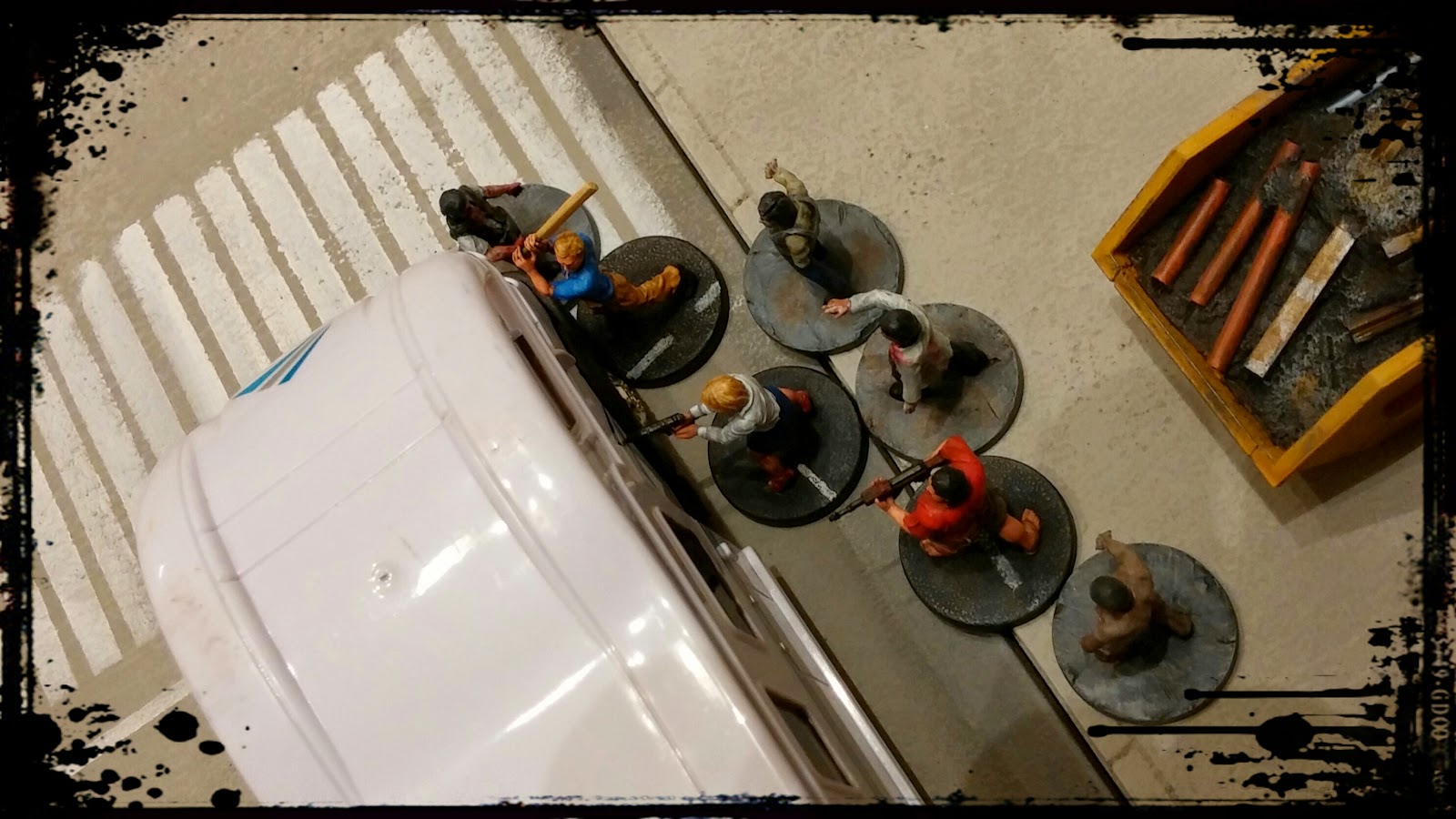 It wasn't good.  At all.  Jenny went down first, Alec close behind.  Gus narrowly managed to take down the remaining Zeds, and looked over to Rick who was struggling to keep Lori from being eaten.  Thankfully the RV had petrol and was road worthy.  But no matter how many times he turned the key, he couldn't get the engine to start.

With the last Zed OD'd, Rick picked up Lori and with Carl and Daryl covering him, began running as fast as he could towards the RV.  More Zeds went down as they approached the RV, and as Lori's unconscious body was pulled onto the RV the key turned in the ignition and the engine finally started.  With a passing shot from one of the windows taking down another Zed, the RV lurched forwards across the junction and away to safety.

Now that's what I call a fantastic, tense and terrifying encounter.  Roll on the next gaming session!  I got so caught up in it all, I didn't take anywhere near enough photos of the events.
Labels: All Things Zombie Modern American City Wargaming Two Hour Wargames Zombie Apocalypse Wargaming