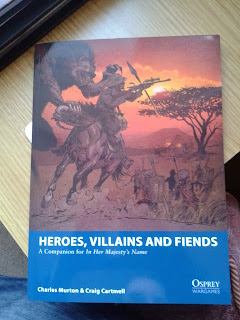 I was absolutely delighted to receive this in the post at the weekend. I know its another VSF/Steampunk/Pulp rules set to add to my stash, but you can never have enough decent rule sets in my mind!  However, I opened it to find the following inside... 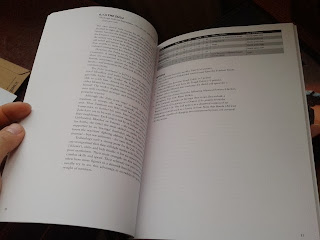 And its like that on every page.  Black and white. Including the charts.  And not a single picture anywhere. But there are plenty of spaces like the one in the picture above where there is clearly supposed to be something. Of course, I emailed Osprey.  And give them their due.  It was the weekend.  So they did nothing.  However, I got a lovely impersonal email on the Monday morning at start of business saying they were passing this on for comment.

And while writing this little post in my early lunch break, an email has come in from Osprey.  And apparently this is normal.  It's a print on demand publication because its a supplement and therefore an unknown quantity in terms of demand.  If they didn't do this, according to an unnamed source, it wouldn't have been out until 2014, and it does have four additional army lists!  And because its a print on demand, it would have cost more if it were to have pictures.. and blah blah de blah blah...pleh!

So, it appears that Osprey isn't sure how well these supplements will sell.  But I can't help thinking that by already announcing a second supplement to IHMN which is already called "Sleeping Dragon, Rising Sun" then this is surely an excuse to drop expected production levels.  Because you surely don't announce two supplements that you don't expect to sell?

And frankly, that leaves a sour taste in the mouth.  Especially when they promised that the Osprey Wargames series would be a collection of stand alone books.

So if you're listening, Osprey, we buy your books because of the high quality full colour production values. If you can't afford to do that because of a lack of projected demand, for pity's sake warn us.  And please, don't leave gawking great gaps of white space all over your printed book.  It makes it look like you forgot something.  It makes you look  like you rushed out something without thinking.

And please, please, don't assume we'll be placated by telling us that this way we can get four extra army lists and rules in this way.  If you'd cut out all the white space we could have got, oh I don't know, the whole of the second supplement in this one.  That'd be radical.

The only thing this product has done successfully is make me question whether or not I will be buying any more of these supplements for their single, stand alone wargames rules sets in this series.

They'd better do a much better job with A Fistful of Kung Fu, I'm telling you!
Labels: Heroes In Her Majesty's Name Villains and Fiends VSF Wargaming