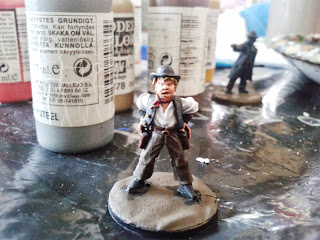 Figure scale.  Some gamers don't worry about it.  I'm one that does.  And that's probably because I get as much delight from viewing a wargames table filled with miniatures and scenery as I do in playing the game.  Of course, the vista never gets to be created until the right set of rules has been found and agreed on.  Its just that I'm fickle and can also find myself drooling over a range of miniatures and then having to go and find a decent set of rules to justify a purchase.
And there's the problem.  You see, I really like a lot of miniatures from a lot of manufacturers.  And the trouble is they have some very interesting interpretations of what counts as a 25mm scale model.  So much so we now talk as freely about 28mm as 25mm,  Nowadays we simply add the prefix 'heroic scale' to anything we claim is 28mm but is actually 32mm scale.  What's the hassle, I hear you ask?  Well, if all you're interested in is getting some nice minis on a table and playing a game with them, then there's probably very little, thank you very much.  But if you like everything to scale, you're not going to stand Lady Justice beside a Space Marine and a gunfighter from Foundry and say anything other than "You've got to be having a laugh!" and similar pre-watershed suchlikes!  Of course, you're never really going to stick those three figures together in any system (unless its to have a laugh with Good: The Battle) but the fact stands. 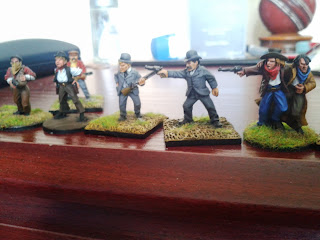 I must confess, Perry Miniatires and Artizan Designs rank as my favourite historical miniatures.  By far.  End of story.  You can see my painted Billy the Kidd figure from Artizan at the top of this post.  He's about to be arrested by a Perry figure I'm painting as a sheriff.   However, as you'll see in the above picture, he's the same height as the rest of the Artizan range.  Which is a shame.  He's also a bit taller than the Foundry figure beside him.  And that's the problem.  I would have loved him to be a little shorter.  Still, he obviously grew up well secure in the same knowledge of many Britons, knowing that beans means Heinz.
(Btw, how much free advertising am I managing to pull in this post?!?!?!?!) 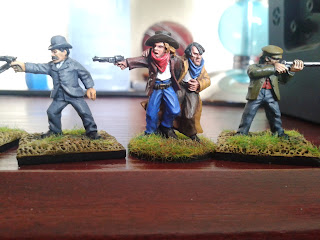 Anyway, I remembered that I had some of these Wargames Foundry models I painted at least a dozen years ago.  You can tell which ones they are.  They were based with the old milliput prodded with a pin method.  And they don't seem to be too bad overall in comparison with Artizan.  Which I find very surprising. Think I might have to rebase them though!  Not so sure about this one in the middle though!  Of course, if I made him a teenager, it'd be perfectly fine. 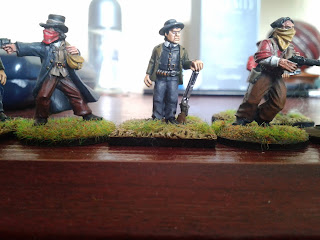 I manage to get round all this by going for the same standard building measurements for all my '25/28/32mm' scale miniatures.  It seems to ground the figures in a more concrete scale that allows a certain degree of variance between manufacturers without making everything look silly.  I won't bore you with these measurements just now as I dedicated an earlier post to them.  Scroll down and have a look!  I dare you!
Of course, if you ever bring a 6mm or 15mm scale mini to one of these 25/28/32mm scale games then I'm afraid you'll get a lot of laughter and sarcasm.  And the guarantee of a good game anyway.  Even if I do cringe at the blatantly obvious scale anomalies.  I can't help it.
Anyhoo, my paintstation is filled with Perry townsfolk which will act as bystanders in TRwNN.  I'll get some pictures posted as they get finished.
﻿
﻿
Labels: Artizan Designs Perry Miniatures The Rules with No Name