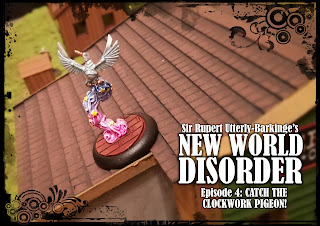 Sir Rupert's mood may well have taken another turn for the worst, but things were looking up for the Dragon Lady.  The Black Dragon Tong had managed to escape with two of the clockwork mechanisms that had been hidden around Windy Port.  The Dragon Lady had also gained possession of the Clockwork Pigeon that once belonged to Dirk Beauregard. She'd been unable to figure out how to make it work.  Until now.  She was determined to make it fly once more. She placed the mechanisms her Tong had recently recovered into the device and stood back as it began to whir and click...

Meanwhile, Sir Rupert's Expeditionary Company were learning a new range of expletives from Count Otto.  They were stranded with no leads and only two of the four mechanisms they needed.  Not that they had any idea what those mechanisms were for.  A job half done was a job failed in their books...

After a few moments, the Clockwork Pigeon fell silent.  The whirring and clicking had come to an abrupt end.  But just as the Dragon Lady took a step towards it, the frustration evident in her eyes, it shot up into the air with terrific force, leaving a trail of pink, purple and blue smoke in its wake.  It darted this way and that before heading off at great speed across the town.  The Dragon Lady bellowed to her Tong and they were on their feet in an instant, pursuing the strange rainbow-belching clockwork pigeon.

"What was that?" asked Private Gathering.

"I'm not sure," said Sir Rupert. "It looked like a ruddy large pigeon."

"Ya.  But vot vas coming out its rear end? Purple und pink smoke?"

"Well, you don't see that every day," said one of the Secret Agents.

"Then I think we'd better catch it!" Sir Rupert said... 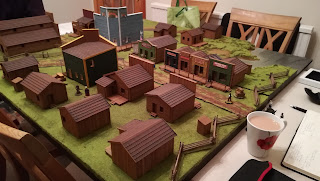 Rather unsurprisingly, the next thrilling instalment of our campaign saw us playing scenario 9.1.9 Catch the Pigeon across a busy board representing another part of Windy Port.  Since we enjoyed the last game so much, we decided to stick with the same complications, 9.2.3 Collateral Damage and 7.3 Armed Civilians from the HVF supplement.  We decided we would roll a random direction dice at the start of each turn to determine the pigeon's movement.  It's good to find a use for those old scatter dice from GW. The clockwork pigeon would move D10-2" each turn. 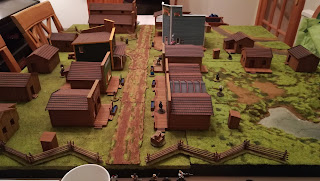 The pigeon began the game according to the rules slap bang in the middle of the table, which placed it on the Sherrif's roof.  Just above the cells. That might pose a problem or two for our two factions... 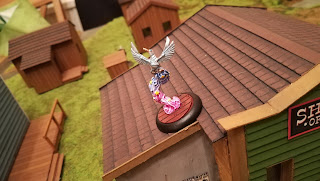 As the game began, both sides split up in the hope of cutting off the clockwork pigeon.  We were more interested in surrounding it as we had rolled a '2' for its movement, which when you put that into the equation D10-2 meant it stayed put.  It was clearly taking in all it could see.  The Dragon Lady moved a cautious 3" in the hope of casting Spitfire at it.  She would be successful on anything other than a '1'.  Guess what she rolled.  Yup, that's right.  A '1'. 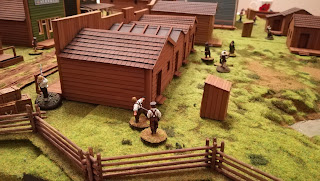 At the start of the next turn, the clockwork pigeon moved a whopping 2" which saw it meander to the edge of the sheriff's roof.  A Boxer ran at full pelt along the road, climbed the sheriff's and took possession of the clockwork pigeon.  Meanwhile, unperturbed by her previous failure, the Dragon Lady tried to cast Spitfire again, this time on Count Otto.  It was a long shot and she needed a 10.  She rolled a 2.  Goonda took aim with his carbine and killed a Tong member.  A Boxer returned fire at one of the Secret Agents and missed.  Perhaps the tables were beginning to turn in favour of Sir Rupert? 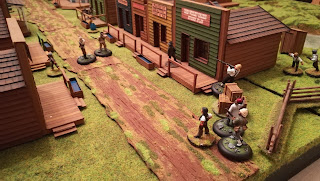 In the next turn, all chaos broke loose as Derek and I lose our minds.  For the first time in our gaming history (and that's quite a long time, let me tell you!) our models begin to take to the roofs. 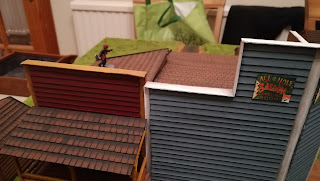 That Yeti down there... 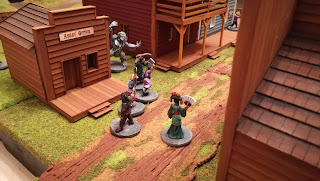 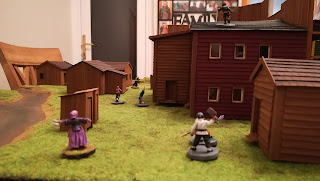 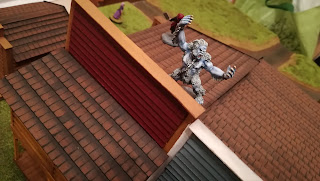 You don't see that sort of thing every day, I can tell you! 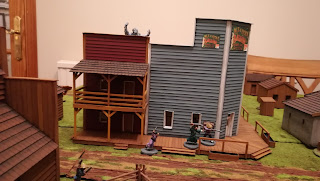 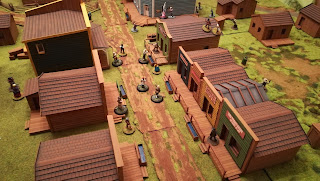 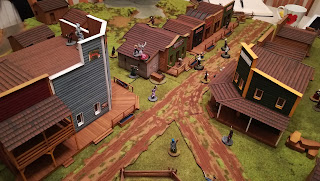 In a bid to help out Sergeant Reynolds who had found himself charged by two Tong members, Count Otto shot into melee using his Hunter skill.  He would hit on a 2+.  He rolled a 1.  Sir Rupert shot a Tong member but only managed to knock him to the ground as he passed his 8+ Pluck roll with an 8. 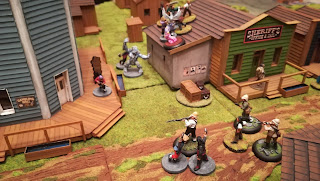 Meanwhile, two of the Secret Agents had managed to climb onto the Sheriff's office.  Unfortunately, their efforts to catch the clockwork pigeon were now hampered by the arrival of master Wu Jen.  And the Yeti was getting awfully close as well...

The Dragon Lady tried casting spitfire at Count Otto, but a roll of 6 on a 7+ meant otto was blissfully ignorant of her actions. 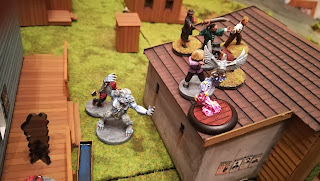 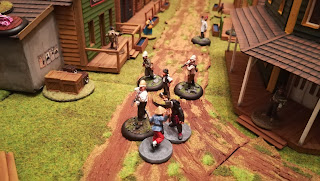 A Secret Agent managed to kill the Boxer on the roof.  Master Wu-Jen attacked another Agent but he passed his Pluck roll.  He fought back but missed.  And behind the Sheriffs, the Dragon Warrior killed an agent, leaving the way open for him to get on the Sheriff's roof and add to the misery taking place up there. 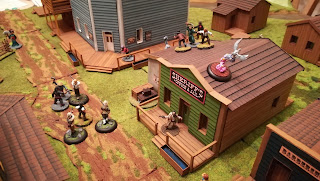 Suddenly the clockwork pigeon moved!  To the other side of the roof!
In a surprise turn of events, the Yeti didn't climb the roof.  No.  Instead, he decided to charge Private Gathering who thankfully passed his Pluck check for being charged by a terrifying beast. The Boxer fired at Count Otto and managed to knock him over. 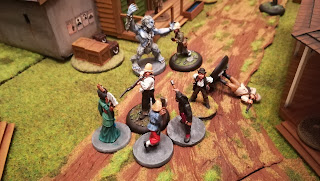 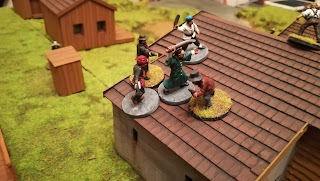 Back on the roof, the Agent managed to successfully disengage from combat and reach the Clockwork Pigeon.  This was a major boost.  Or at least it was until the Dragon Warrior got in the way... 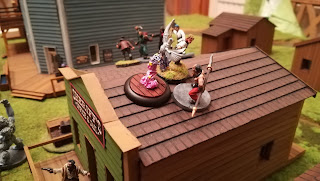 Private Gathering summoned all his Bayonet Drill training and attacked the Yeti.  Once again this slayer of T-Rex's pulled out all the stops and killed the beast!  But there was no time to celebrate, for the Dragon Lady had charged Sergeant Renolds.  She cast Dragon Talons on herself, which didn't bode well for our brave Sergeant who had only his trusty bayonet to defend himself with.  And what was I worrying about?  he might have been hit, but he passed his Pluck roll and lived to tell the tale! He then returned the favour and gave her the taste of cold British steel.  Huzzah!  He hit her.  She failed her Pluck, and the Sergeant took out the Dragon Lady! 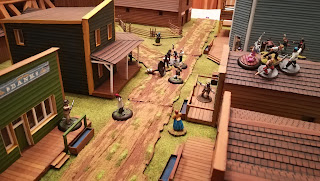 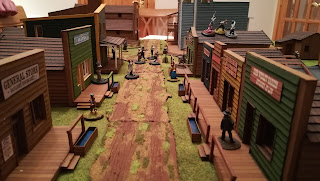 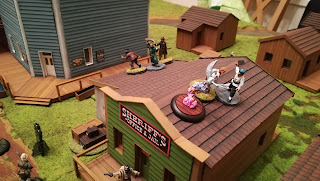 Count Otto got back to his feet, congratulating the Sergeant and Private as he did so. 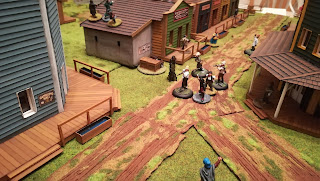 Sir Rupert was able to draw his sights on the Dragon Warrior in the Sheriff's roof.  He took aim and fired, felling him.  Sergeant Reynolds shot and killed another Tong member.  With quick succession Sir Rupert's Expeditionary Company, ably assisted by the Secret Agents, set about the systematic dispatch of the Black Dragon Tong.  They took possession of the Clockwork Pidgeon and allowed themselves a wry smile.  All they needed to do now was figure out what to do next! 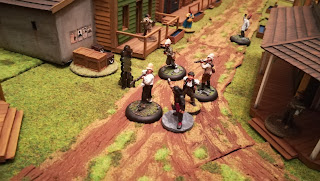