Birdies and Bogeys - The Return to the Riverside Resort 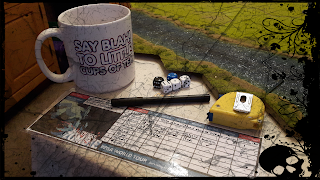 Welcome back sports fans to Riverside Resort!  Before the break, our brave golfers were making their way around this dilapidated course fending off Zeds as they went.  If you missed this part of the tournament, the highlights are available here: An Eagle at Last!

We began at the fourth hole, 80 yards from tee to cup.  Tigress Woods was ready to tee off.  Anikka Die Gulfer, whom you'll remember had to replace her twin sister last time due to the horrific and terminal injuries she sustained, noticed two Zombies were making their inexorable way towards them. 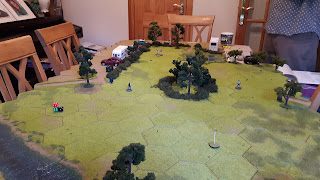 Unperturbed, Tigress launched her ball 54 yards to the right of the copse of trees.  It landed nicely on the fairway, finding its path between the Zed and the hedge. 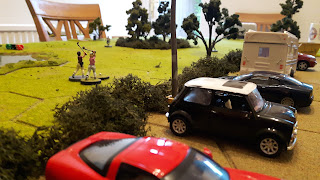 But those Zeds kept on coming, leaving our golfers wondering what to do next.  Anikka ploughed her ball 62 yards along the same course, and joined Tigress as they began to move towards the cup.  They hugged the hedgerow to keep as much distance between themselves and their undead pitch invaders. 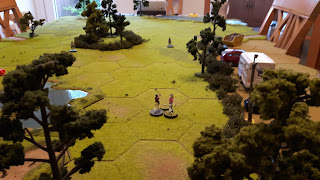 Anikka found the Zeds were getting closer and closer.  Unwilling to risk a stroke penalty by breaking into a run, she instead drew her revolver and fired twice at the nearest Zed.  With uncharacteristic good aim, she not only double tapped it, but also managed to double pop it!  This of course meant we had to roll to see if any more Zeds were attracted by the sound of the gunshots.  Thankfully none appeared.  That just left one Zed ahead of them... 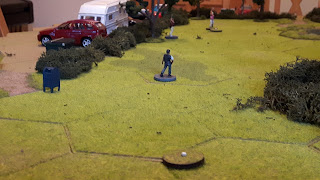 Tigress managed to shoot it, and out two golfers walked to their respective balls to continue their round of golf. 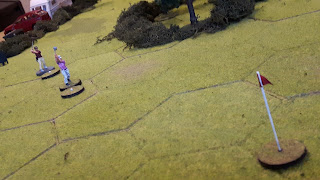 It was at this point that Anikka managed to prove herself to be the equal aerosol to her now deceased twin sister.  Her second swing pushed the ball 34 yards, right past the cup.  This was all the more amazing because there were no Zeds in sight to distract her.  Her third shot tried to redress the error, but overflew the cup.  It landed 30 yards away, or, as Tigress said to her, was pretty much where she had been two strokes earlier.  Anikka's fourth shot was more respectable, travelling 18 yards towards the cup and landing nicely on the green.  .  Her fifth shot putted the ball the remaining two feet into the cup.  Great, a double bogey. 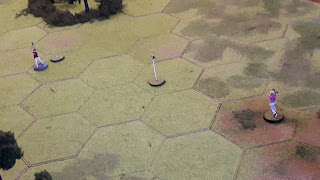 What was that?  How did Tigress do?  Well, if you must know, her second shot saw the ball roll straight into the cup, earning her a birdie.

And then more Zeds appeared for the start of the 90 yard fifth hole. 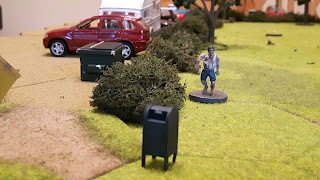 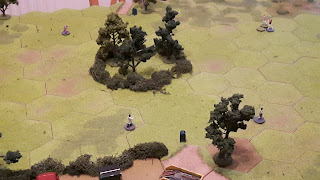 And with more Zeds to the left, we quickly decided to take the path to the right. 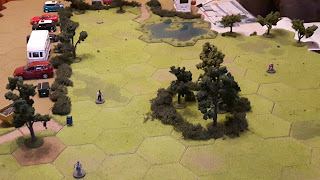 Tigress teed off first with a respectable 52 yard pitch.  Surprisingly, Anikka managed to do exactly the same.  Tigress did the needful with her revolver, dispatching the Zed to allow the game to continue in relative safety. 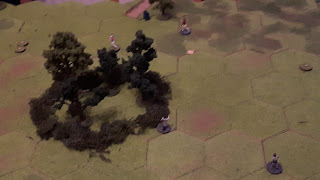 Tigress' second hot went a whopping 64 yards and was saved from landing in the car park only thanks to the hedge.  Anikka's response was slightly more respectable, though admittedly still an overshot of 54 yards.  And as the Zeds kept walking away from the golfing action, Anikka seemed to find her stride.  Her ball was on the green, 17 feet away from the cup.  She lined up her shot, mustered her skill, and proceeded to putt the ball right into the cup!  Anikka was on par for her fifth hole! 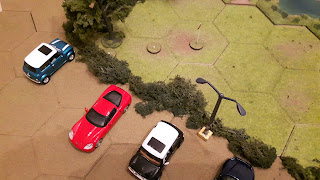 Things didn't go quite so well for Tigress.  Her third shot came u short, leaving her 3 feet from the cup.  Her fourth shot landed her a bogey as the ball rolled around the cup before going in.

Next up, the short 60 yard 6th hole.  Really straightforward, this one.  A clear line from tee to cup with no intervening copse of trees.  Tigress lined up her first shot, and watched the ball land 58 yards away from her.  Anikka tried to do better, but fell short as well, her ball coming to rest 56 yards away.  It was at this point that the Zeds began to activate much more frequently than our golfers. 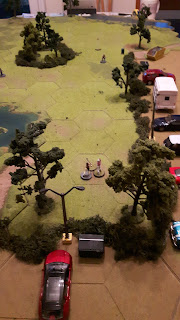 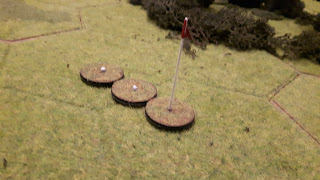 ...it wasn't looking anywhere near as hopeful at the tee... 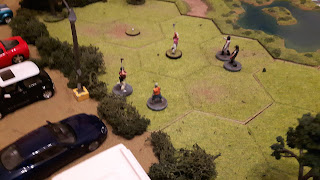 In fact, it would all depend on the next activation roll.  The Zombies are the black dice, Anikka the green and Tigress the red.  Here's hat happened next! 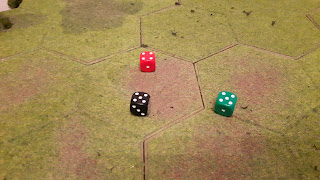 We all have Rep 4.  This meant that neiher the Zeds nor Anikka could activate.  Firstly because their rolls were higher than their Reps.  And secondly because they were doubles.  And while Anikka fired twice at the Zeds near her and removed only one, Tigress charged the Zed to her front.  Winning the round of combat she managed to use her iron to good effect by caving in the Zed's skull. 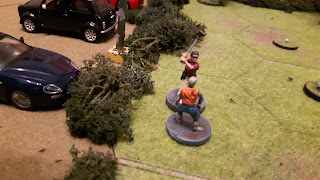 Tigress then turned and shot the last Zed.  Which was great until we had to roll for Zombies attracted by gunfire.  This is where all the 6's began turning up.  Anikka's gunshots attracted one.  Tigress' shots attracted two.  Great!  After all that, we were back where we had begun... 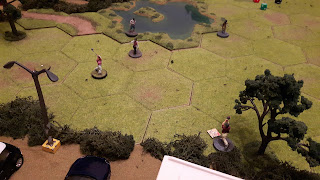 Thankfully the activation dice were on our side, and we were able to move away whilst concentrating our fire on the Zeds.  We were eventually able to kill them all without attracting any of their chums. 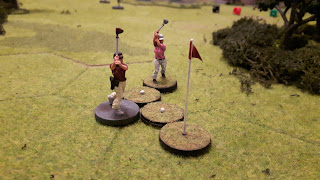 And that left us to return to our golf.  Tigress, shaken by the recent events, overshot the cup by a foot.  Her third shot finished the hole on par.  Anikka's second shot came up two feet short.  She too reiied this with her third shot.

Breathing a sigh of relief that the evening's entertainment had left them both alive, and with no stroke penalties for legging it screaming from a Zombie horde, they checked their scorecards to see who was winning.  With the first hole abandoned, the shots were counted, and Tigress was found to be in the lead, scoring a par with the course.  Anikka, despite her eagle on the second hole, had done so badly on her two subsequent holes that she was now scoring a double bogey.