I'm delighted to say that I have completed my American Diner build for All Things Zombie.  And not a moment too soon, either.  It'll take centre stage in our next game tomorrow evening.

You can find the earlier parts here:
Part One
Part Two
Part Three

Here's s shot of the workstation (a.k.a. my very own corner of the Dining Table) once the work was finished this evening.  What follows is a brief overlook at the work done yesterday and today to get to this point, illustrated with suitable photos when I remembered to do so.  It's been a bit of a dash to get this one finished, but hey, it's fast food after all! 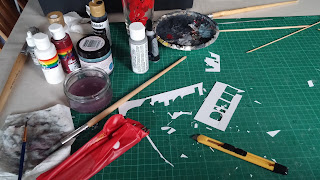 So, my first photo is of a window.  After carefully measuring the frame, and allowing sufficient overlay to glue the window to the wall, I attach my acetate to represent the glass.  As with all my builds over the last coupe of years, I've been slowly using up the plastic packaging two ginormous rolls of Christmas wrapping paper came in.  It's glazed the Town with No Name.  It's glazed my city buildings for ATZ.  And save for a couple of thin strips that will probably serve no use at all, but which I couldn't bring myself to throw out, it's now all finished.  Look at me, getting all sentimental about such things... 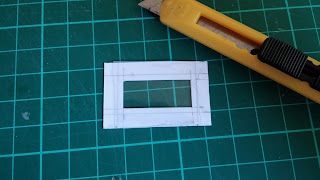 The next picture is clearly what would happen if an immense earthquake struck the diner...no...wait, it must be a wonky view of the interior, showing the overlap of the window.  Except that window above the door is clearly not the kitchen window I was making above.  Hmmm...  There was obviousy some serious point I wanted to make when I took that photo yesterday.  But I have no idea what it is.  I'm clearly going senile.  Joy... 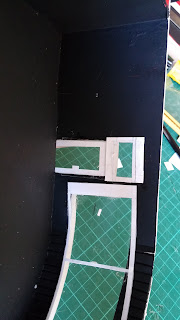 I was concerned there would be too much of the white visible when looking through the great big windows.  This is what I mean... 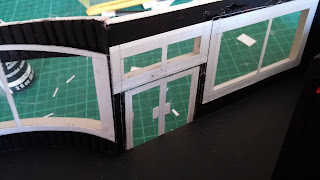 So I went round them, painting as much black as I could.  It made the same section look like this: 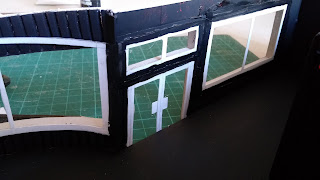 Bit it did appear to solve the problem. 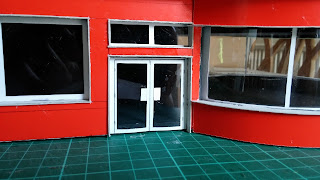 I'm quite chuffed with that to be perfectly honest. 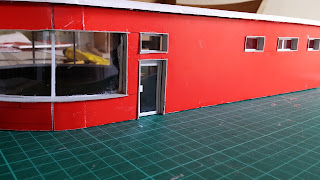 What I'm not so chuffed about is what I did next. 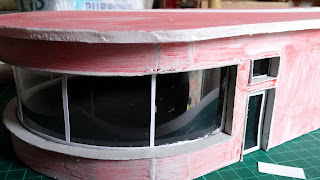 You see?  I was concerned with a few edges that needed tidying up, as well as the exposed foam on the flat roof.  I considered covering the building with polyfiller.  This makes a nice surface for drybriushing.  But it takes a lot of time and effort, and there was no way I could afford the time if it was going to have any chance of being ready for Monday's game.

So I used an old trick of mixing polyfiller powder with PVA and a little water to a paste-like consistency.  The idea is that when it dries on, it creates a nice textured surface akin to the much longer method I had dismissed due to time constraints.  The problem was it looked good at this stage, but it didn't do so well when it came to painting the model.  It made it look as if I had been heavy handed with the paintbrush rather than giving me a definite surface to drybrush.  So I didn't drybrush it at all, for fear it would look bad.  I think a few progressive layers of this would have been better.  But if I had done that, I'd have been just as well as to have cover the whole thing in polyfiller and sanded it down.  Which as I said before, I didn't have time for. 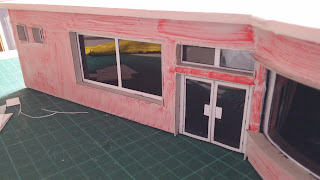 I also added three vents to the roof afterwards.

After painting the model, it was time to work on the signage for the diner.  I used our good friend Google to search images, and decided eventually to make signs to fit on top of the flat roof of the diner, rather than make a freestanding sign.  I turned to my trusty bamboo skewers to form the frame.  As you an see, I filed grooves into the uprights and the horizontal beams to make sure they would fit together more easily when the superglue was applied. 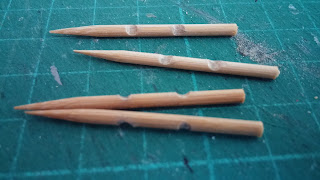 The lettering was printed onto card, and had cut with a sharp blade.  It was rather fiddly and I decided to use two fonts as appeared common on the photos I found on the interweb.  The owner's name was done in white, the Diner word in red.  Again, this seemed a common colouring choice based on my searches.

My choice of paint colour for the diner was based more on the paints I had to hand than anything else.  I used the traditional black, white and red to colour the windows.  The walls were painted that colour because I knew it would contrast with the base boards.  I couldn't paint it grey and watch it disappear into the boards.

I ended up painting the roof in an almost lazy stippling version, applying different mixes of grey and black as I went.  This meant I could cover up any glaringly obvious brush strokes.  I'm quite proud of the result. 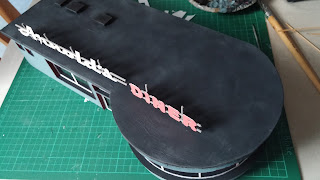 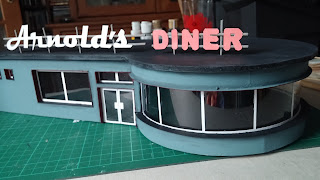 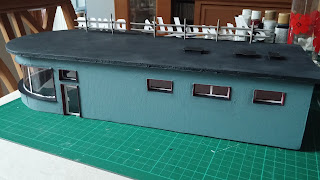 As you can see, I went for a cleaner rather than gone to the dogs kind of finish.  I'm doing this because we're gaming in the the early stags of the outbreak.  And also because I want to use these buildings in our games of Fear & Faith, Kooky Teenage Monster Hunters, A Fistful of Kung Fu and so on. 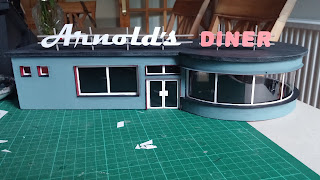 I could really do with a burger and fries just now! 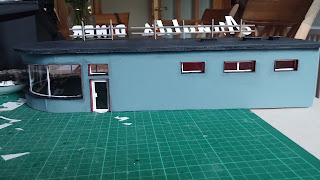 So there we go!  All ready for our next game of ATZ!