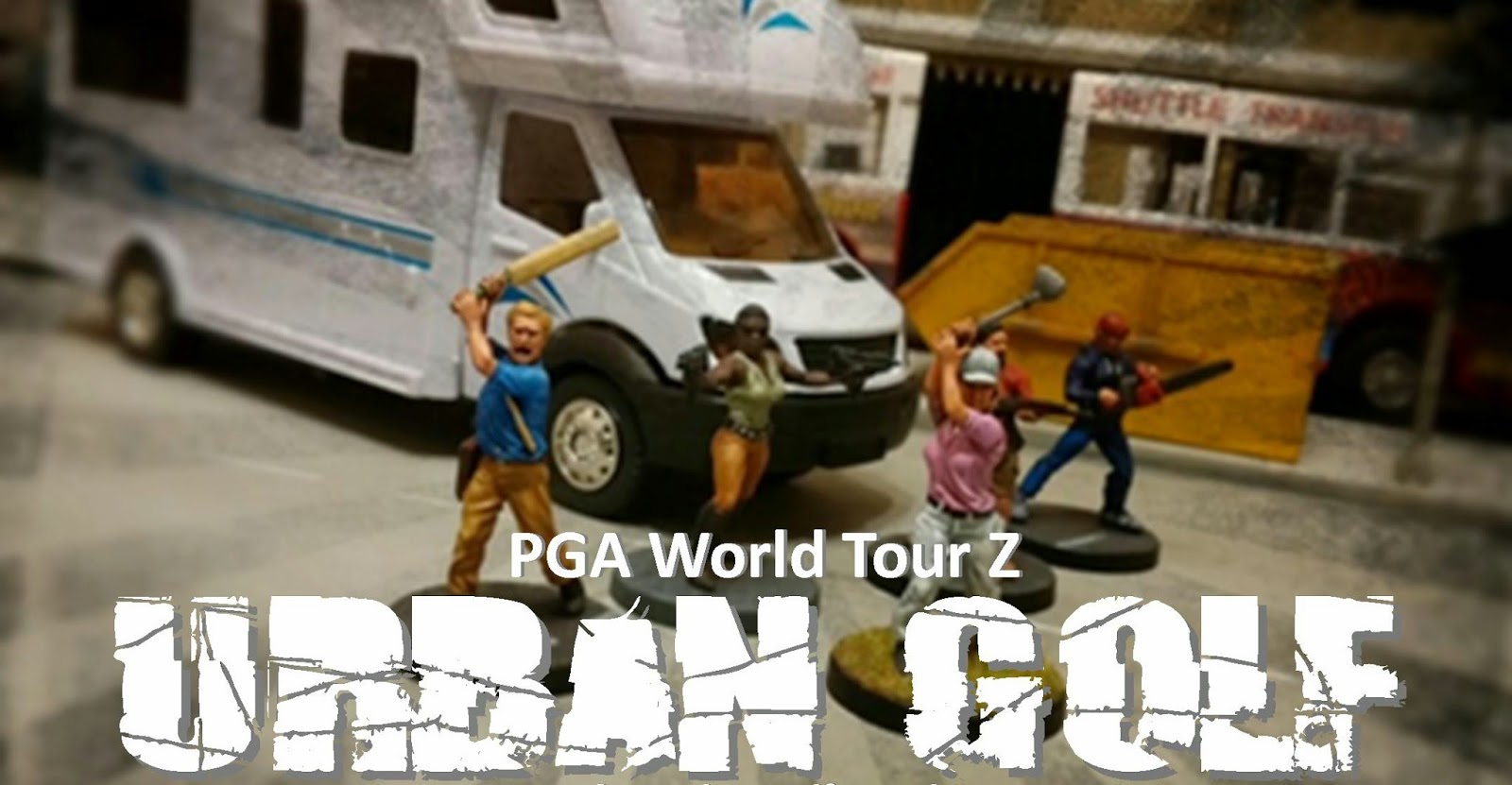 Sometimes you just have to go for it.  We'd been enjoying Ed of THW fame's excellent Zombie Golf supplement to All Things Zombie.  But we kept wondering, what would it be like to play a game of golf in the middle of a city just after the apocalypse strikes?  Not on an actual golf course, but on the streets.  You know, take the game to the Zeds and all that?  We decided we'd have to procure some of those indoor putting mats to represent the cup.  It would be pushing it too far to grab the nearest pneumatic drill to create them because that might attract a few too many Zeds...!

We mused about this.  And then mused some more.  Even when we were supposed to be gaming a more natural zombie golf experience.  What would happen, we pondered, if you misjudged your shot and the ball hit an abandoned car?  What do you do if your shot flies wide and ends up inside a shop? Well, we figured out a whole set of rules for these kind of circumstances.  And then, just for the heck of it, we decided to start playing with our ideas BEFORE I went and put the rules together into a PDF.  Oh well, I suppose it saved some editing time.  You know, because we had to change so much!

This is the story of the consequences... 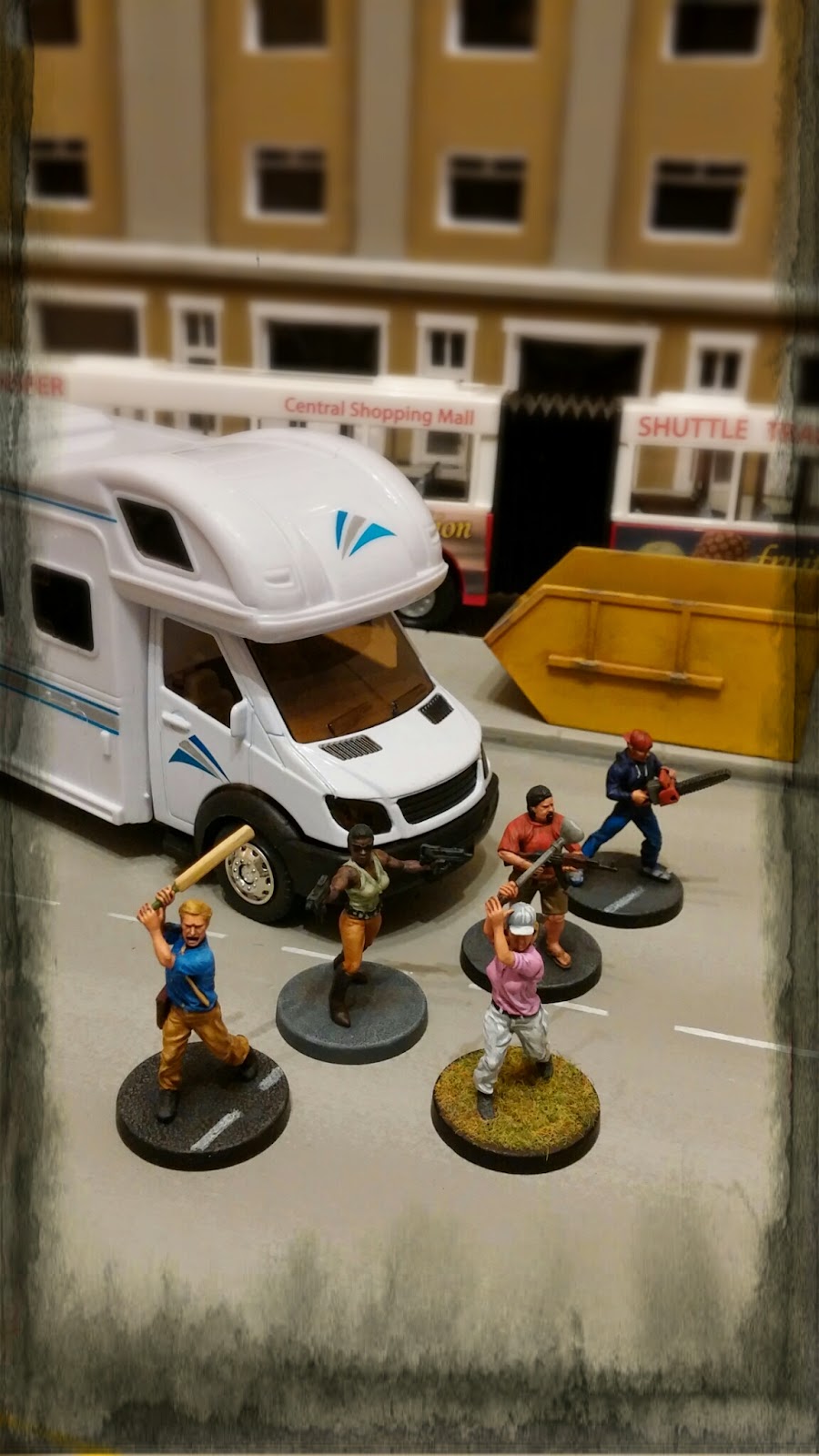 So here's my team, fresh out of the tour bus.  Well, RV.  The golfer is kinda obvious.  Gus was standing in as the marksman, and Pam took on the role of caddy.  As you can see, Alec jumped out the bus brandishing his cricket bat as in the good old days.  You may recall them too.  The fun times when he used to whack and thwack his way through Zeds.  At least he did until he saw Jenny get eaten alive by a posse of Zeds.  Now he's a gibbering idiot.  There's nothing worse than that.  Except perhaps for a gibbering idiot with a cricket bat.  Without further ado, the Bazinator was immediately put on overwatch duty, and would spend the better part of the next half hour trying to bundle Alec back into the PGA tour b.. oh who am I kidding?  It's an RV.

We had decided very quickly that each player should have a golfer at Rep 4, a gunner at Rep 5 and a caddy at Rep 3.  Largely, this turned out to be a GOOD IDEA.  We were playing the Riverside Golf Course distances laid out in the original Zombie Golf supplement, but decided that the golfer and caddy figures had to reach the cup once the hole had been played before the next hole could be set up.  This would make the whole Zed movement much easier as we were having a lot more of them on the table for this one.  Oh, and we decided we had to let the golfers run without incurring the normal one stroke penalty.  After all, we were going to start the game with 1D6+6 Zeds on the table, 24" from the tee.  And the chance of attracting more Zeds would be a 4+ on shots fired, and a further 1D3 at the start of each hole.  Perhaps you can already see where all this was heading...! 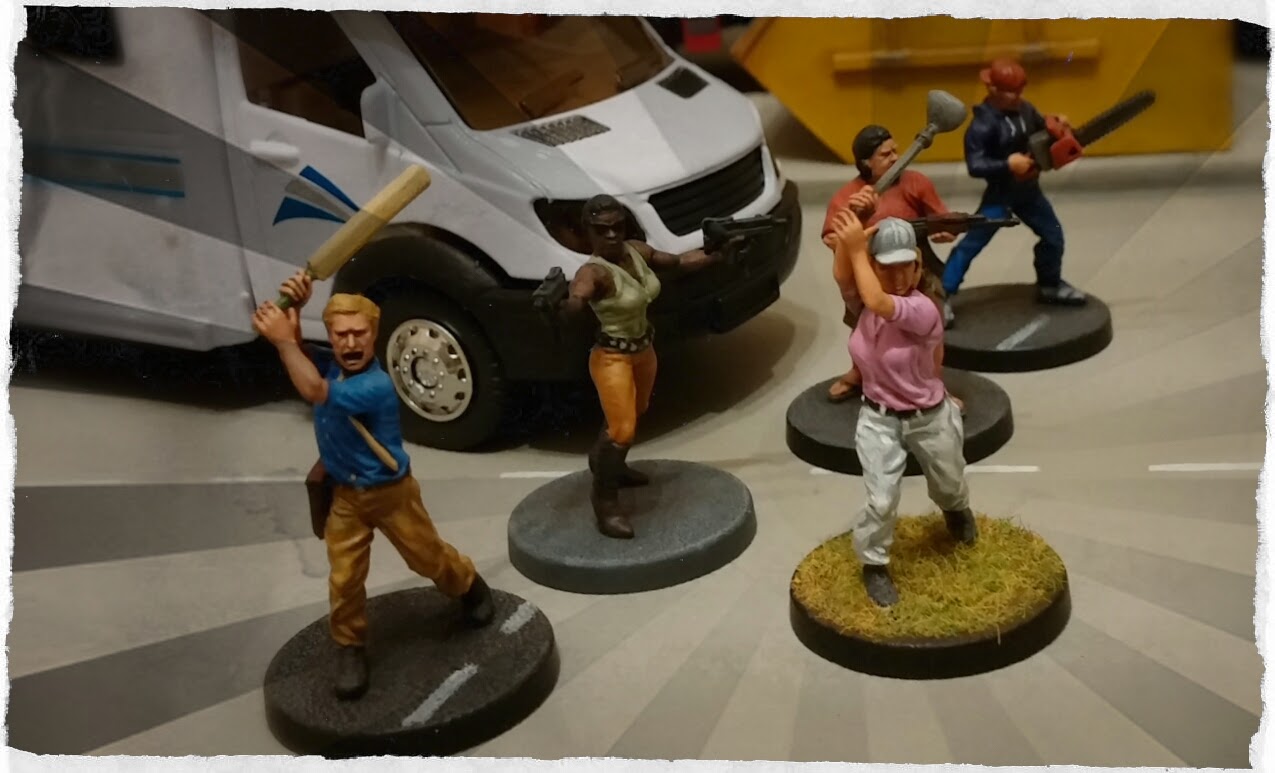 I deployed Gus in an advanced position with a good field of fire.  This, I decided, was a sound tactical decision, and one that would allow him to blast open a route for my golfer.  Yeah, let's see how that worked out for me... 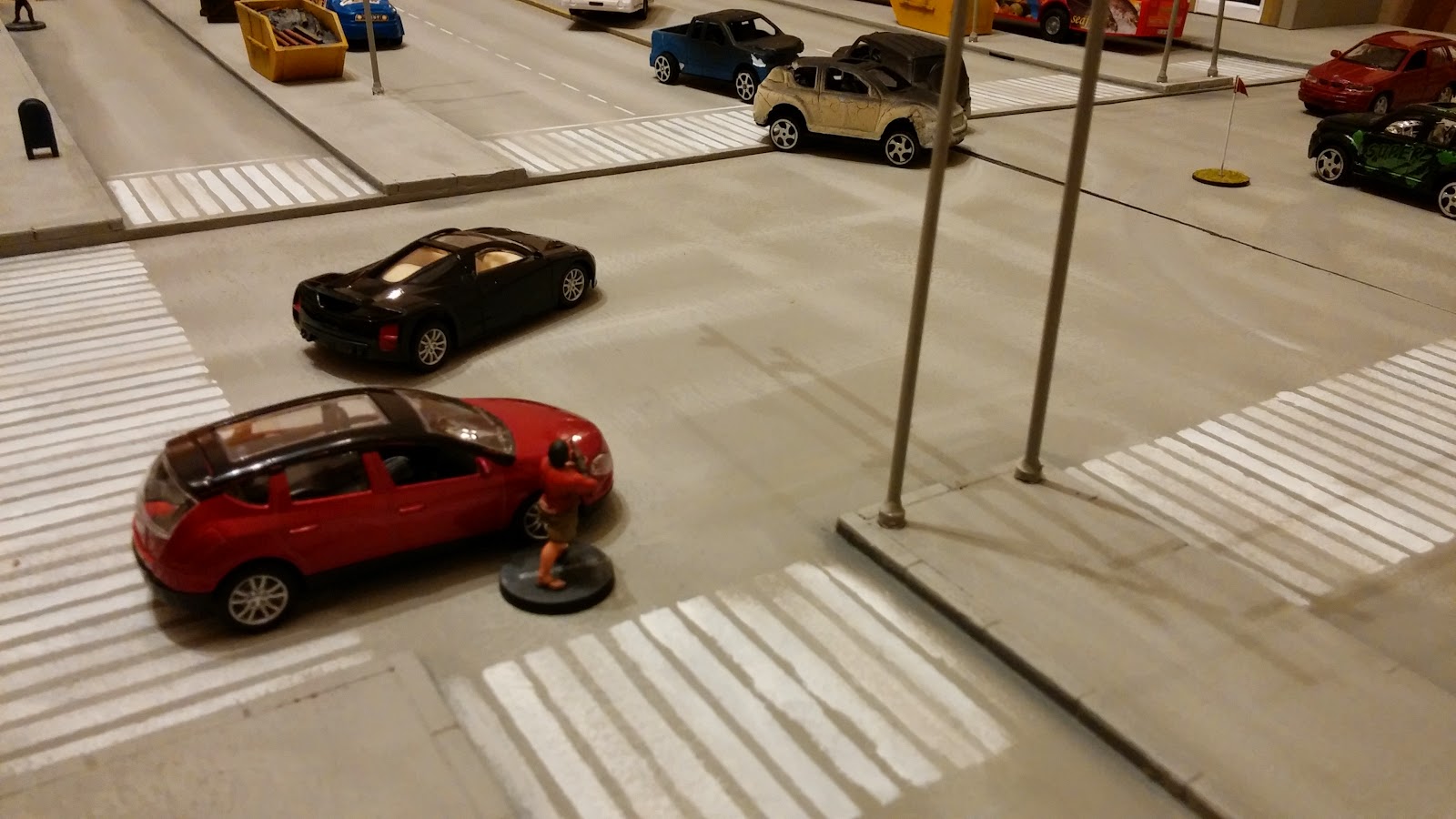 Here's everyone else in their start position at the tee.  It all looks perfectly innocent enough. 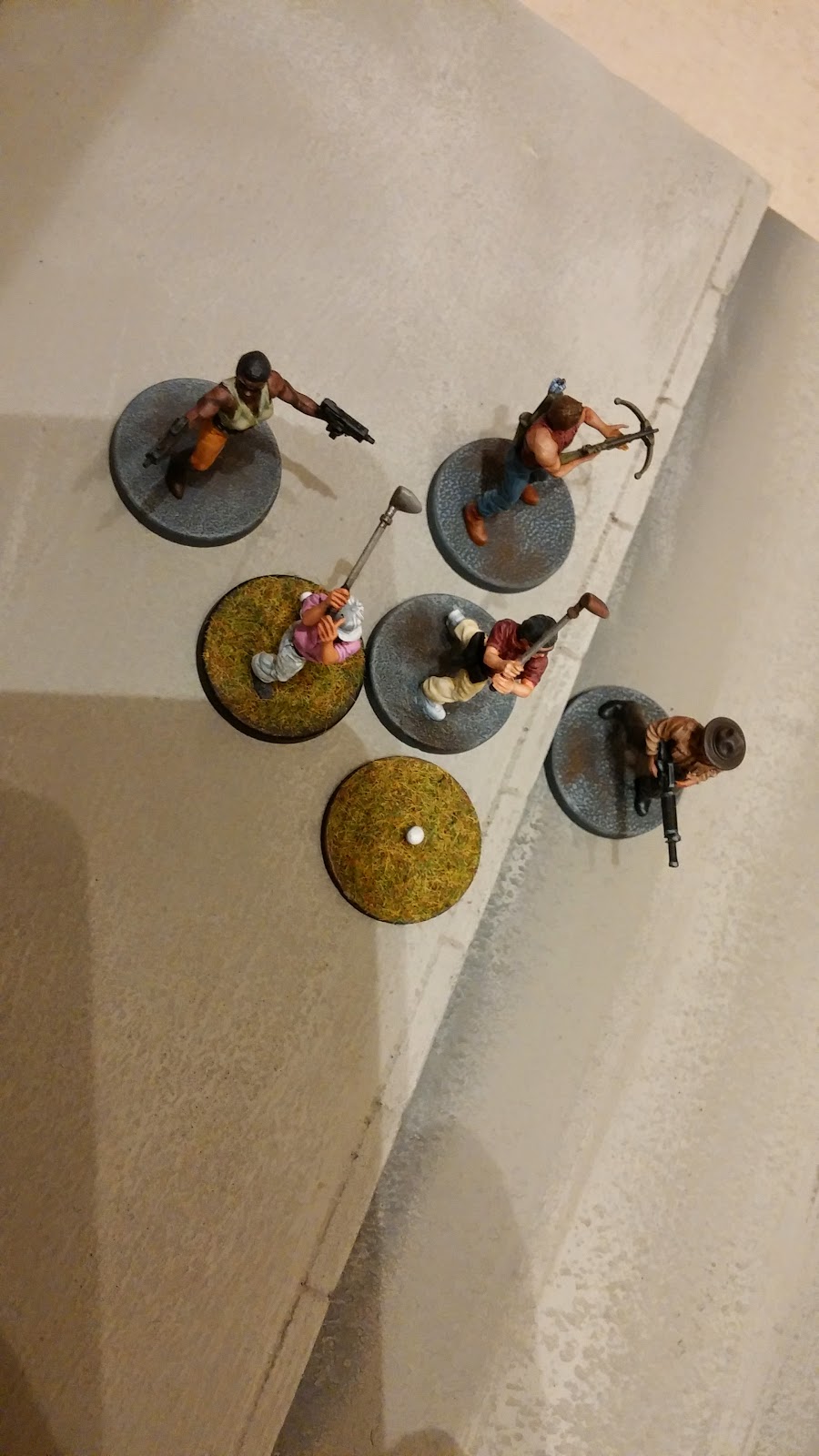 Oh goody, here come the Zeds.  Fortunately for me, Gus is ready to keep us all safe. 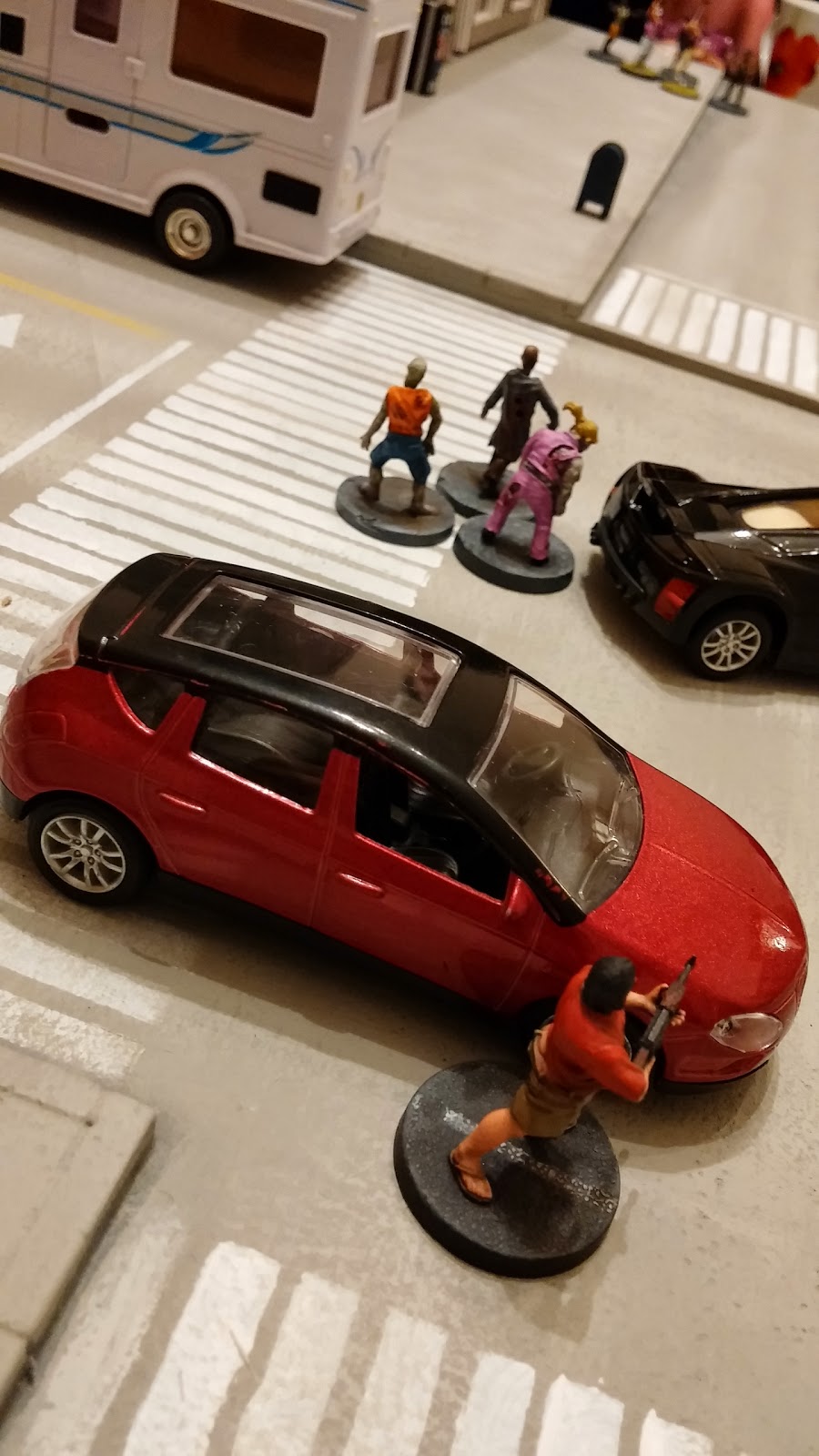 Oh look, another bunch appeared from among the wrecked cars. 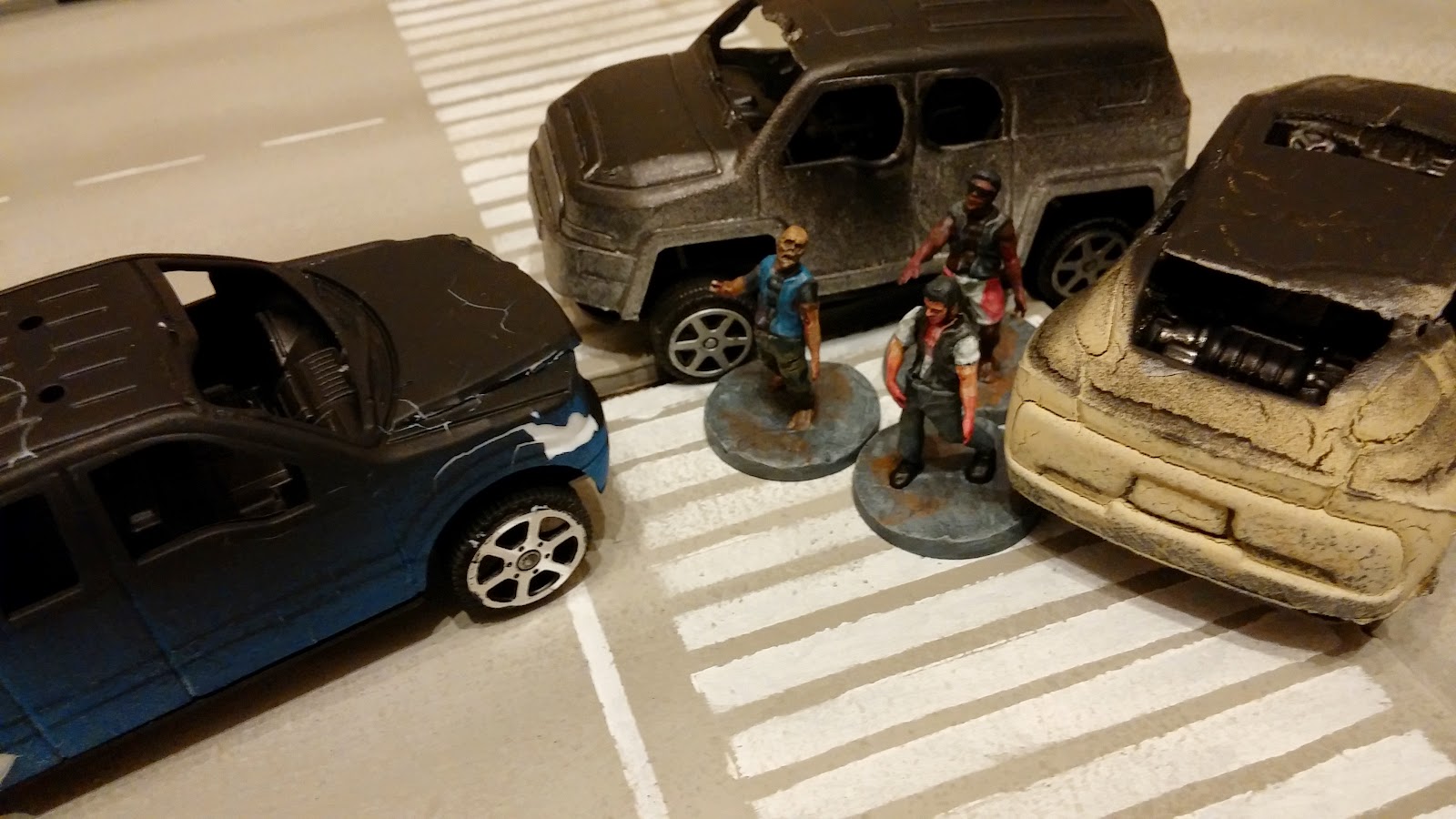 What can I say, the other team got off to a great start, aiming wide of the Zeds and managing to narrowly avoid bouncing the ball off the bus. 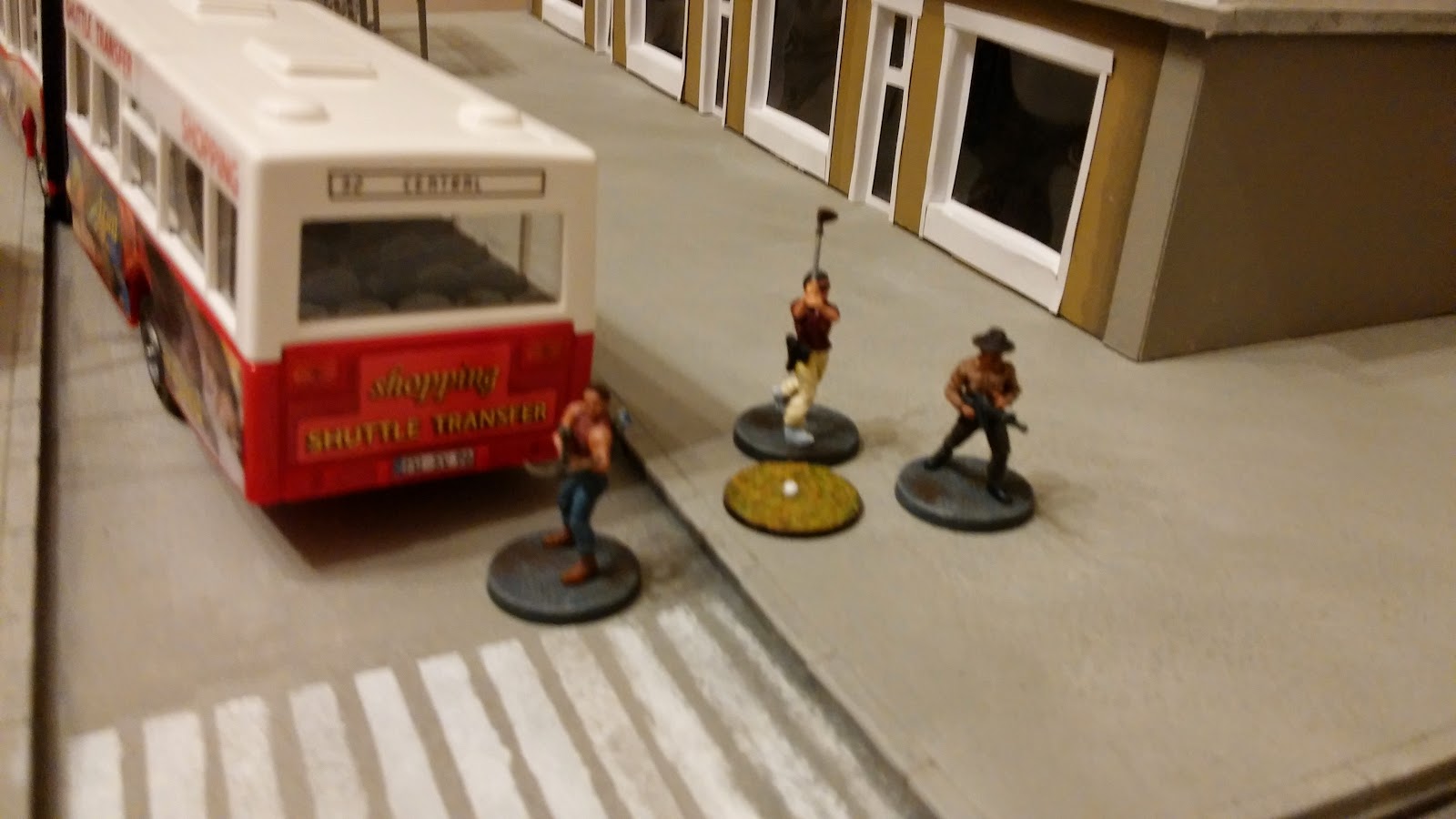 And while my gang failed to move with the activation rolls, no doubt while the golfer was checking wind direction, the lie of the land and all the usual things you clearly do (even in the middle of the apocalypse) those pesky Zeds were getting closer.  Thankfully though, she decided to take her shot and then leg it with her caddy along the front of the building, trying desperately to avoid the Zeds.  It all looked like this: 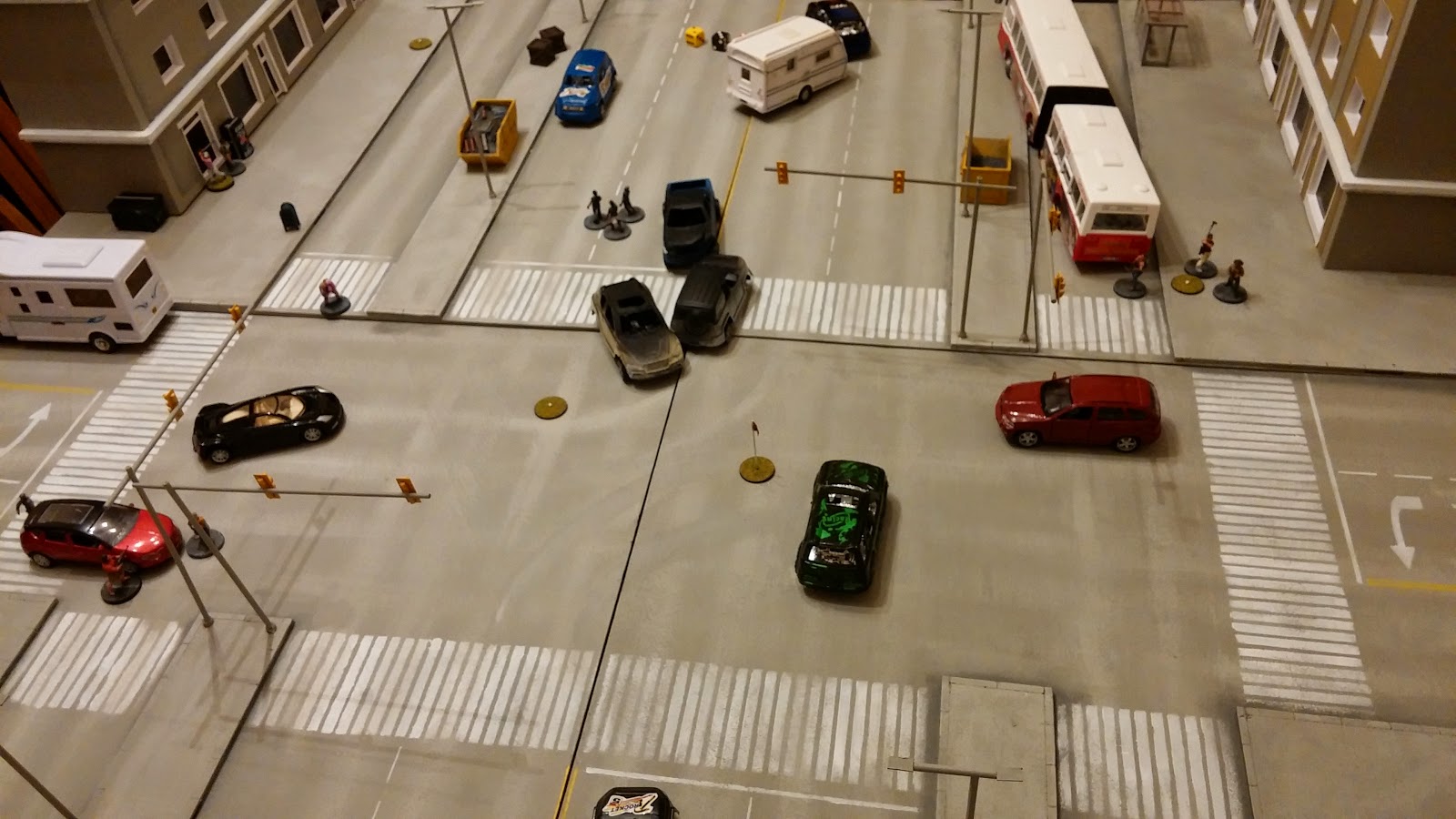 Which very quickly turned into this: 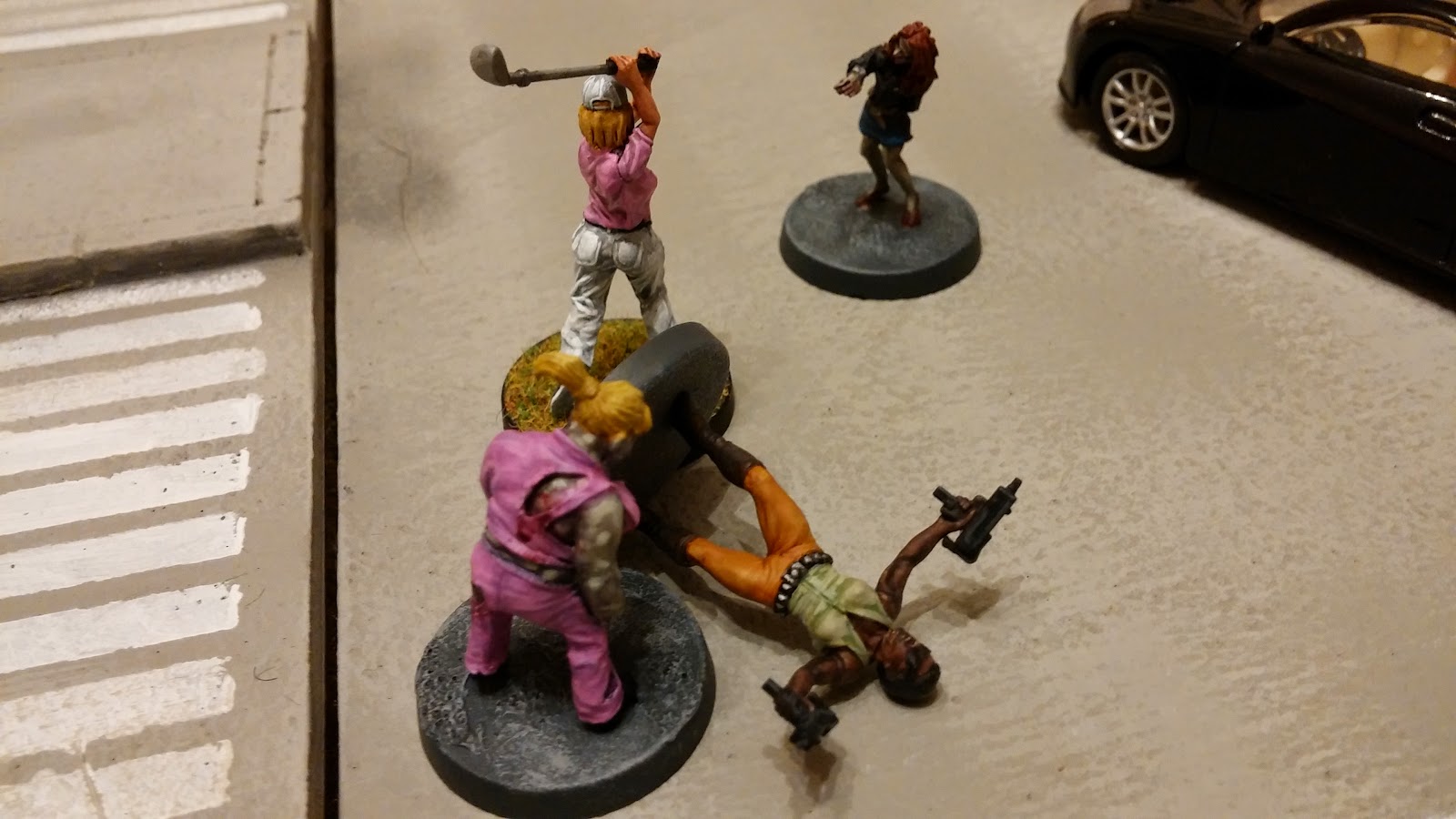 What that picture doesn't show you is the pistol shots that pushed the Zed back from the golfer, partially concealed by the actions of the foreground.  Here we can see a rather voluptuous female Zed sporting an ill-fitting bright pink shell suit.  This horrific fashion victim of a former life managed to sneak up behind poor Pam, scare her into inactivity and pommel her to the floor.  If you look closely, you can see her stooping down about to enjoy her meal.  With a roll of 1, Pam was gone at the end of the first round.  Hungry Zed or what?  And not too far away, Gus got swamped by more Zeds and ended up dead too. I didn't take a photo of this one.  It was all too horrible to contemplate...

Both golfers managed to earn a birdie on the first hole.  The second looked like this.  You may notice my poor golfer on her lonesome ownsome.  Perhaps this Urban Golf thing wasn't such a good idea after all? 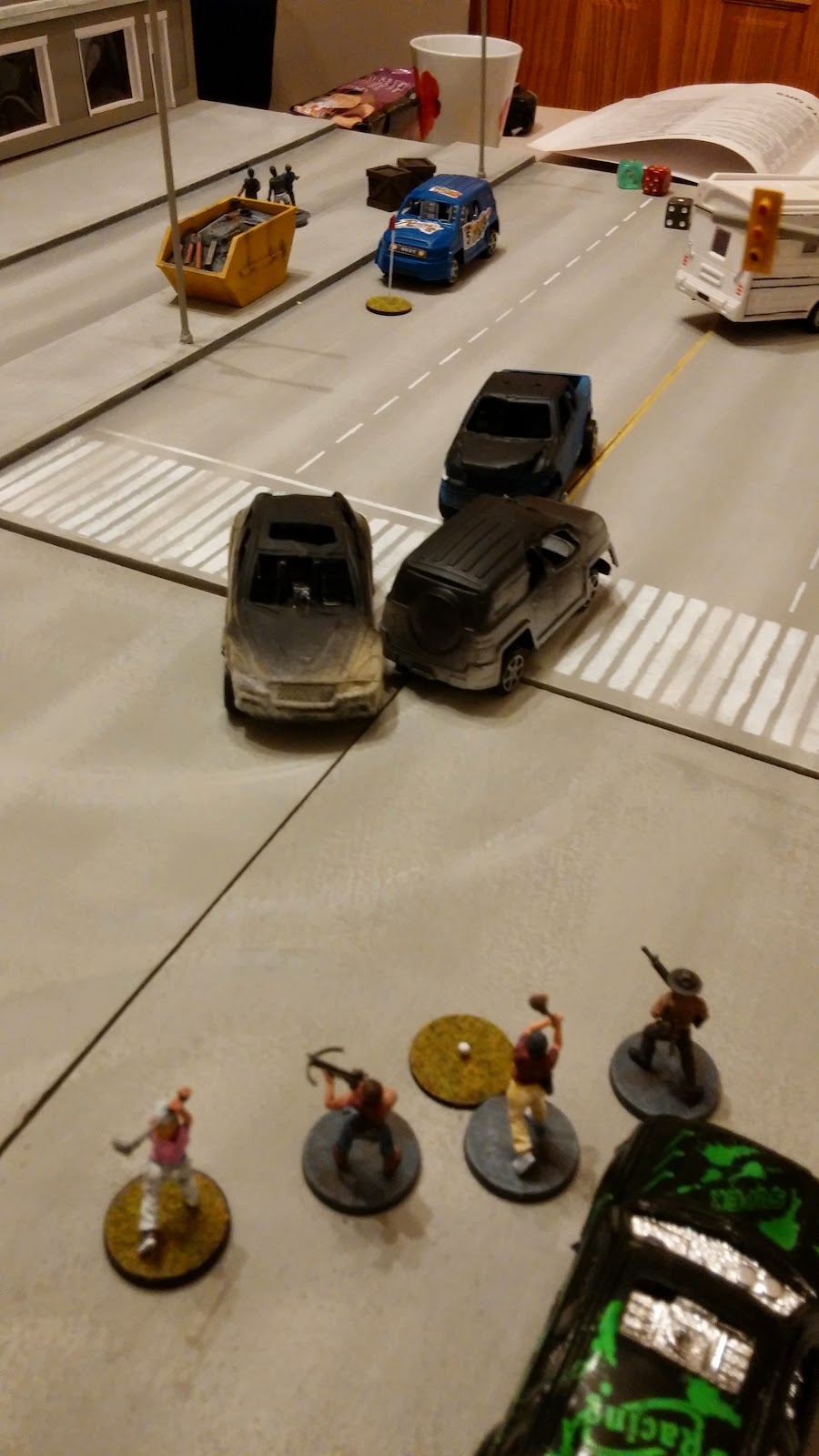 After all this, we decided it was probably A GOOD IDEA to write up all of our changes into a PDF, and carry on next time.  I dutifully did so, and we arrived at our next game full of excitement, and sure that we were onto a winner.  Despite some deliberations, we agreed to carry on where we had left off, even though it meant I had only the golfer to use.   And having completely failed to note where the Zeds were, we simply re-rolled.  This is how the second phase of the tour began... 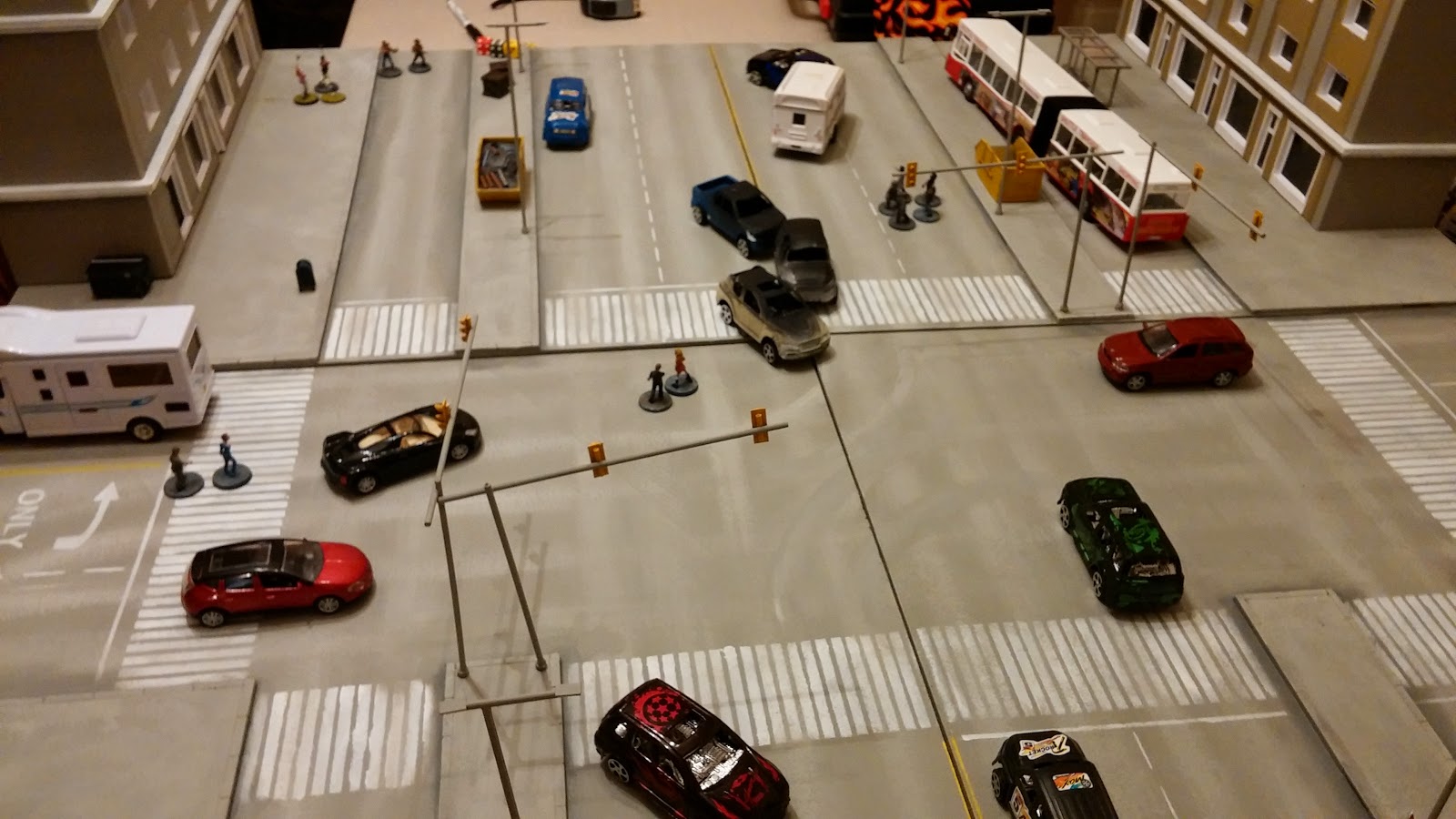 Having taken our first shots, we decided we should stick together. 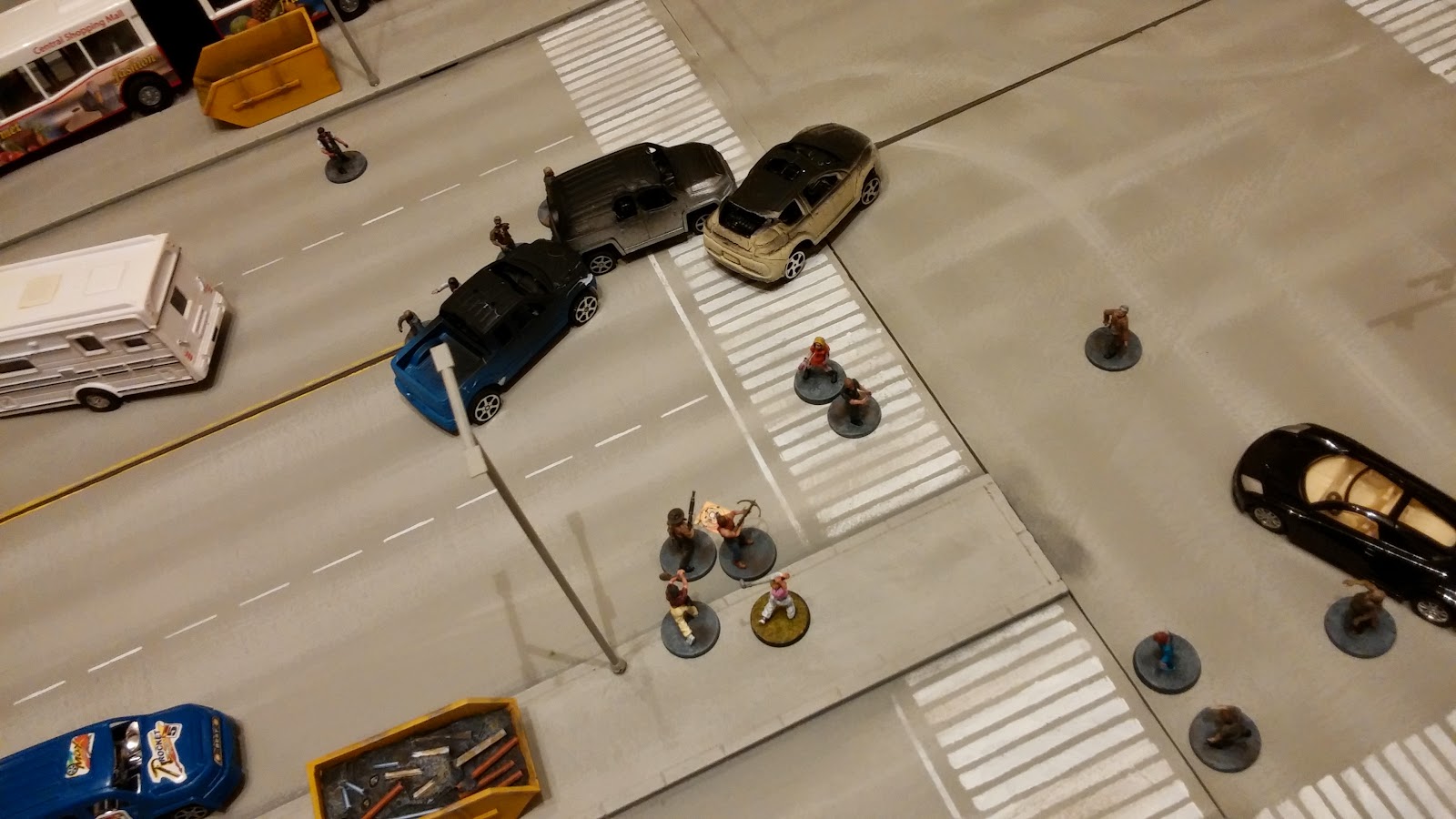 This was okay until the activation dice instructed a giant hand to move the Zeds in closer. 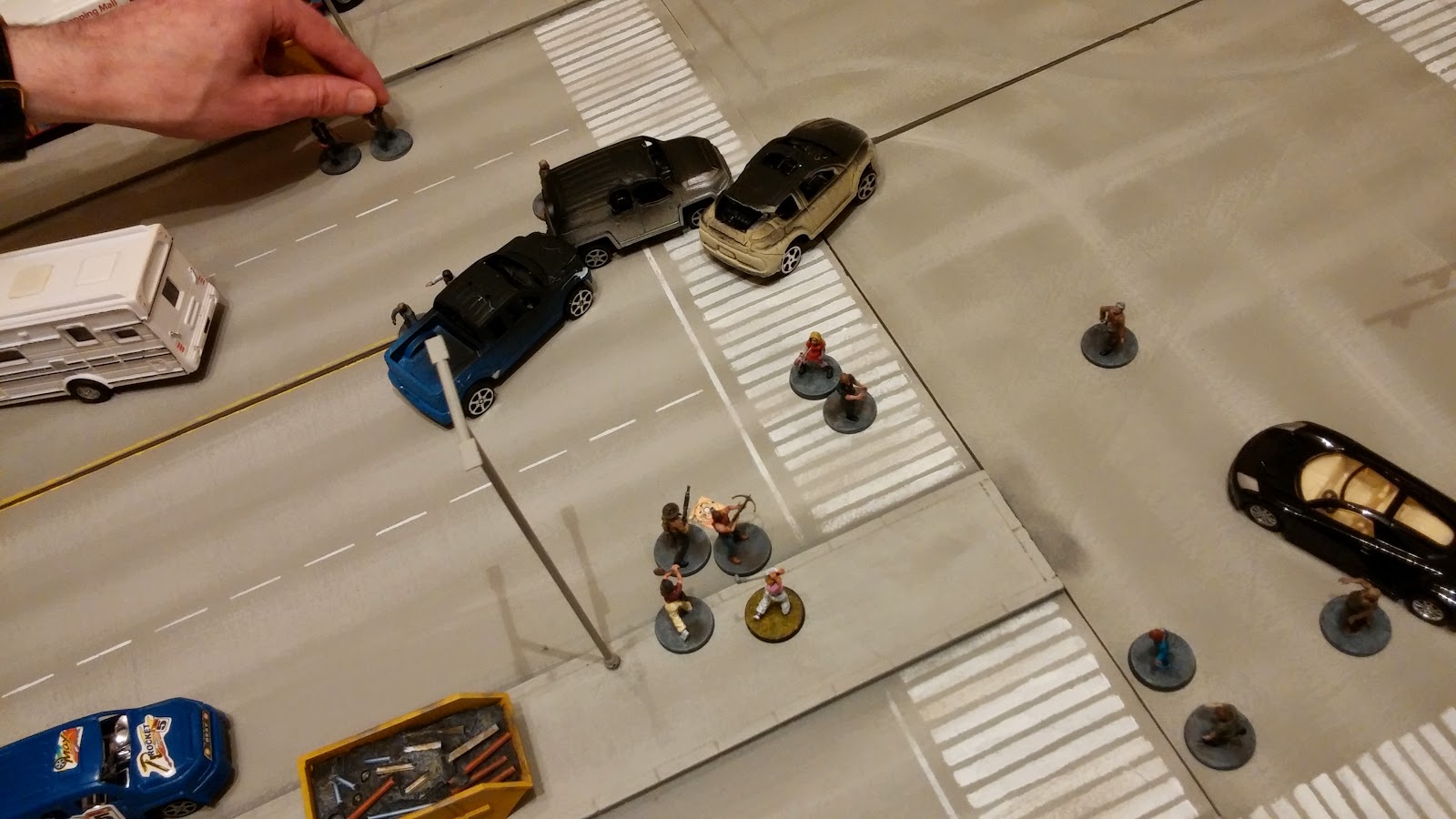 Whichever angle you viewed it, it wasn't looking good.  Especially when we had no choice  but to open fire. 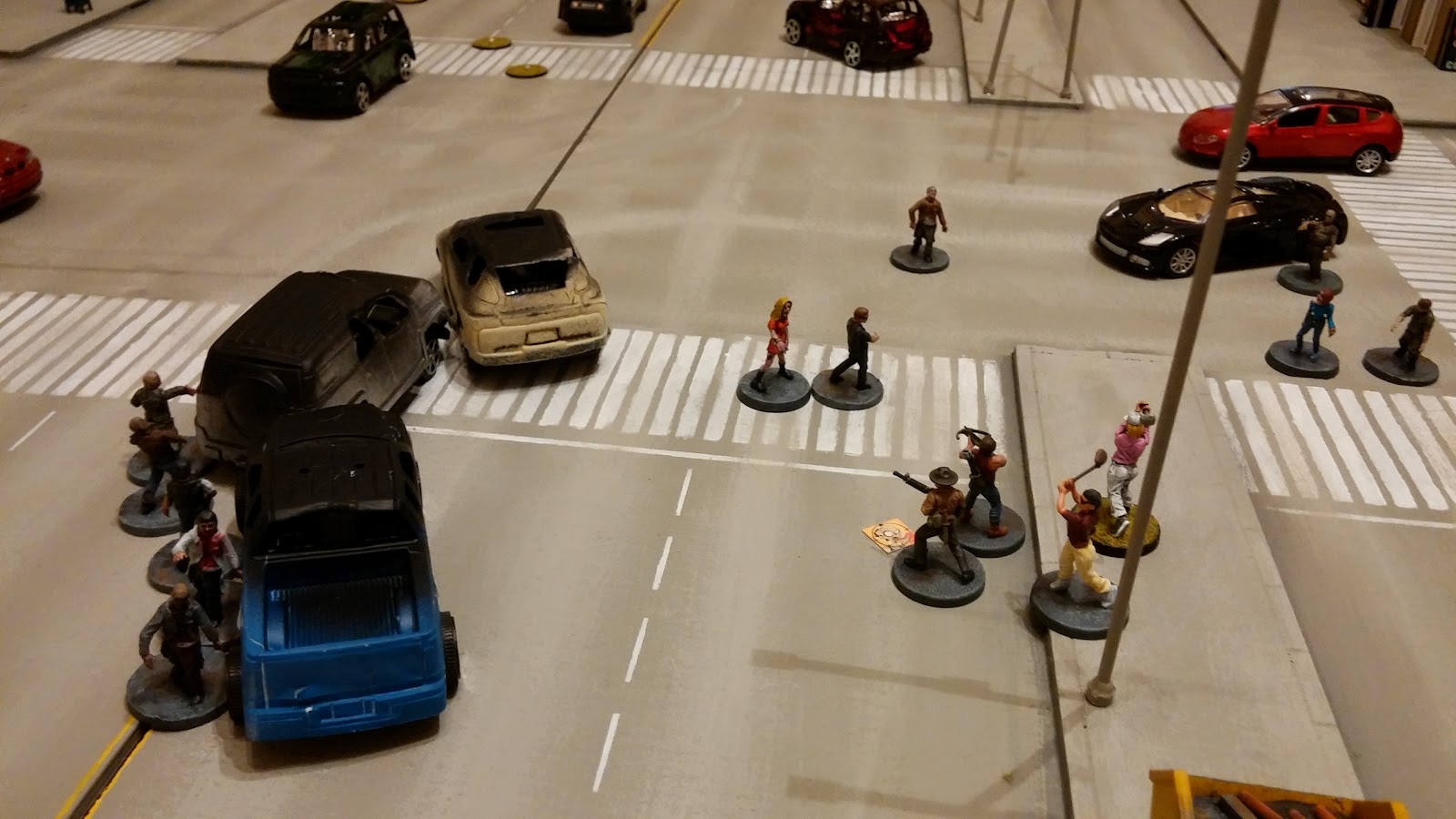 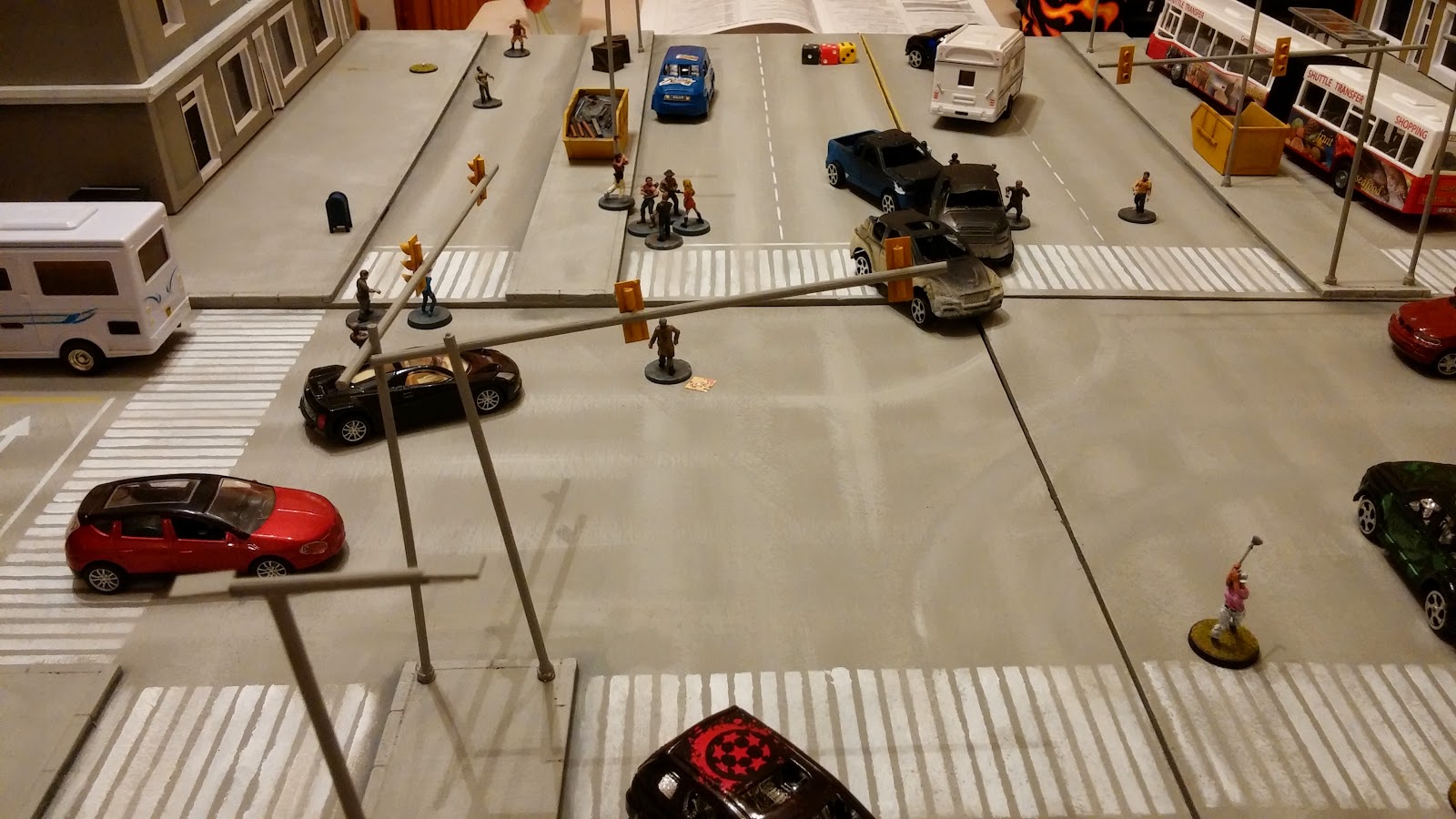 And then the chaos really happened. 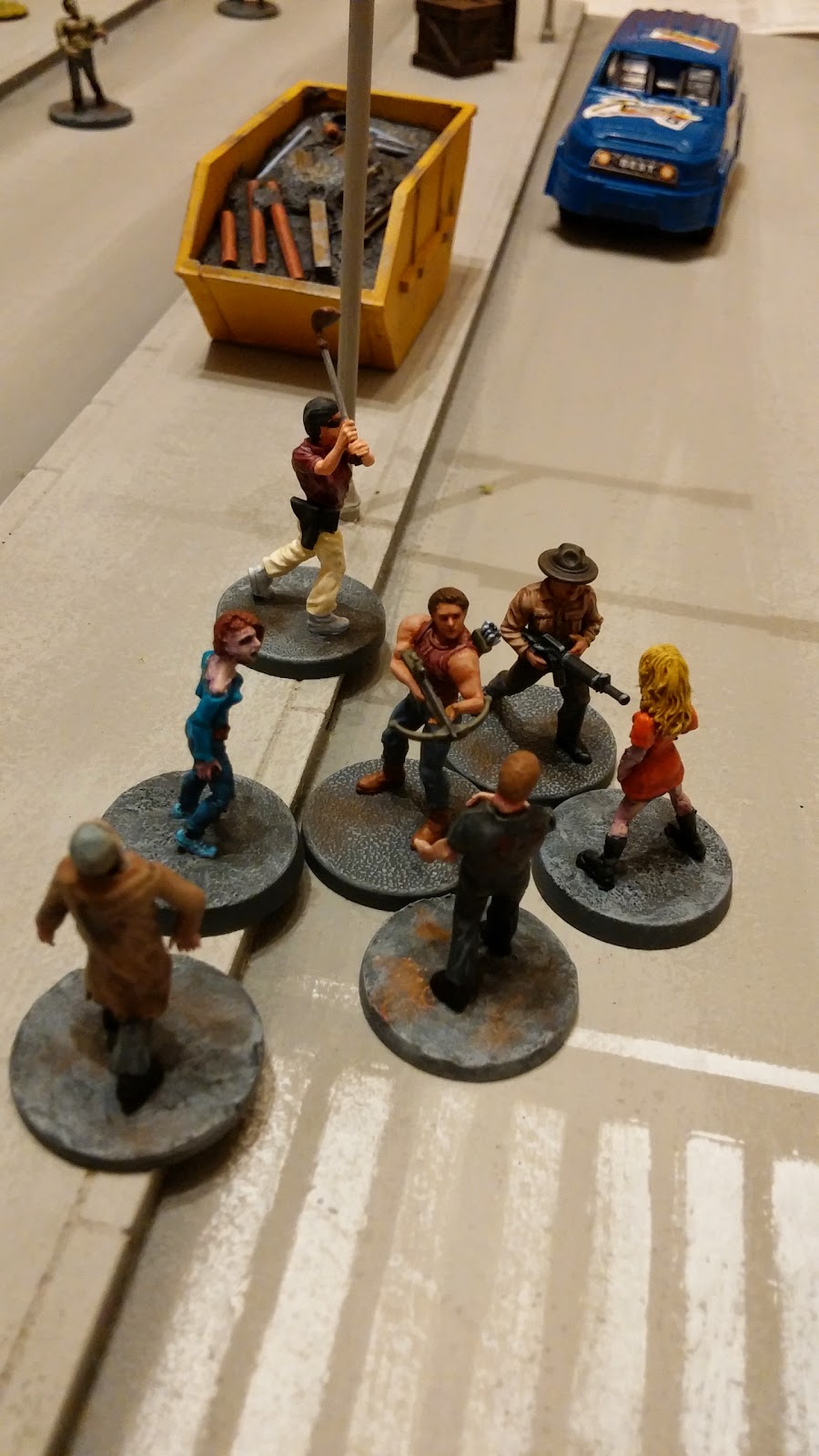 Honestly, we thought we were going to get into awful trouble with the networks as The Walking Dead went head to head with Buffy the Vampire Slayer... 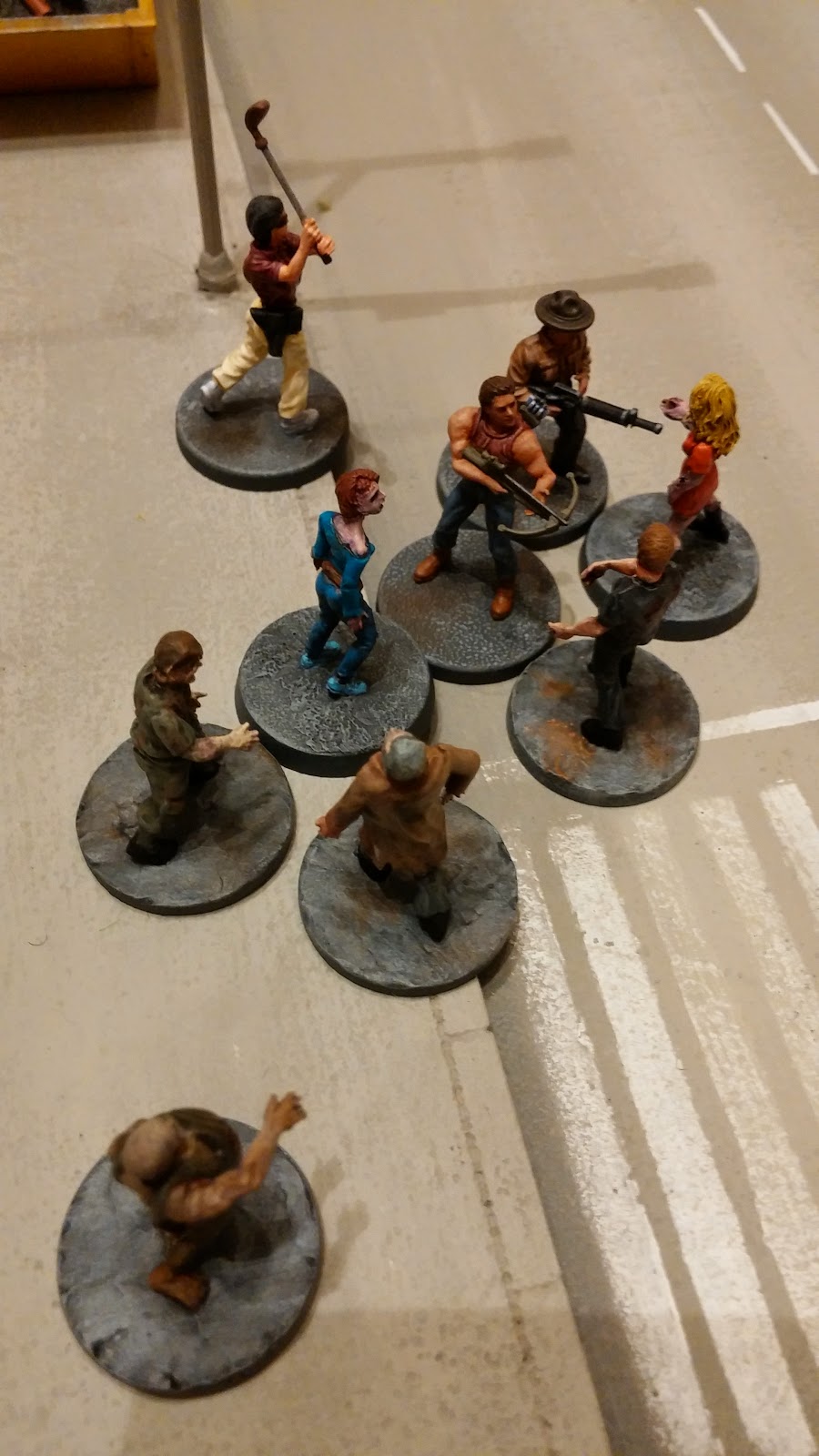 Look, even Willow has joined in the fun! 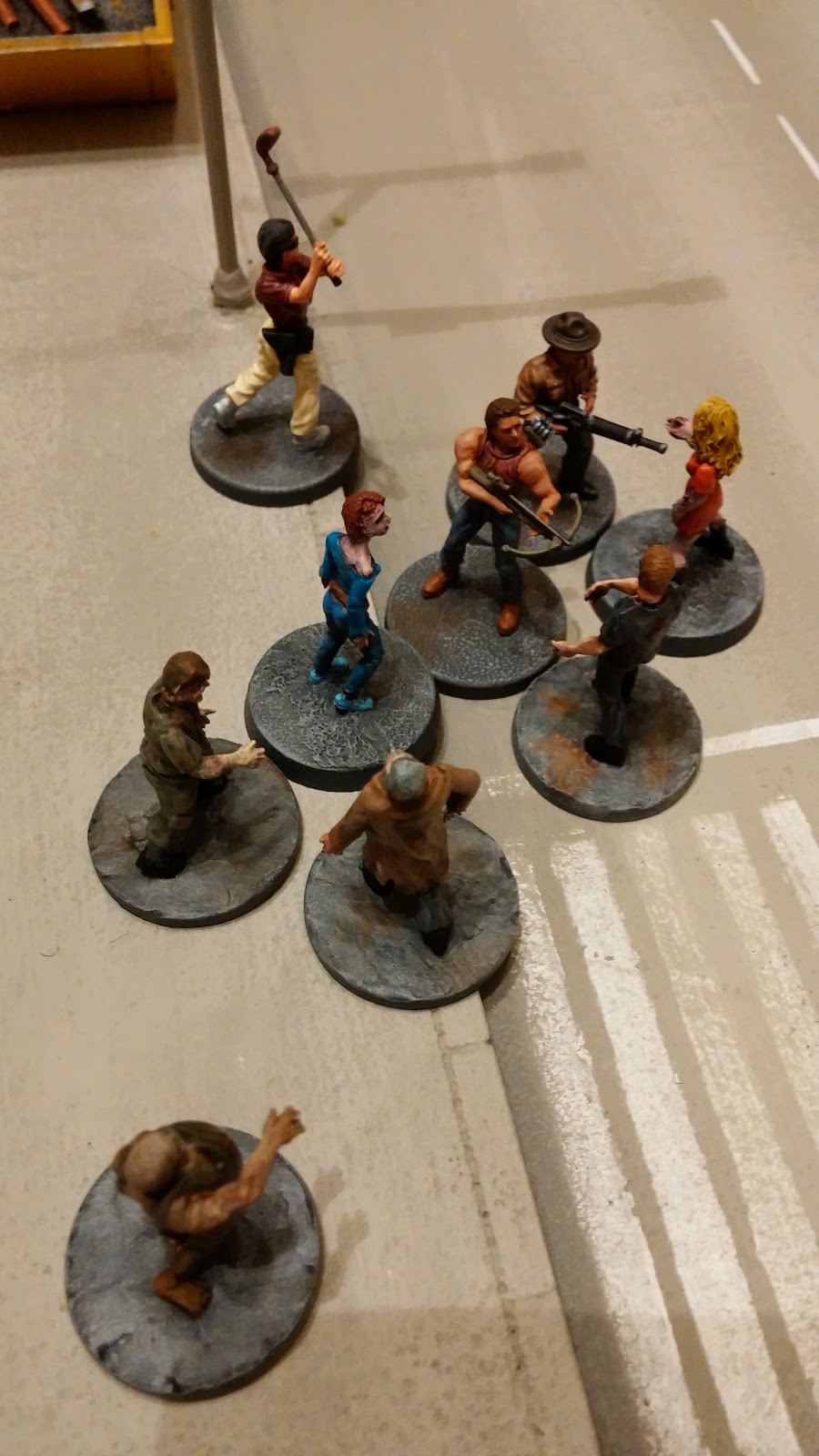 I of course did what every good golfer would do in thee trying times.  I made a run for it. 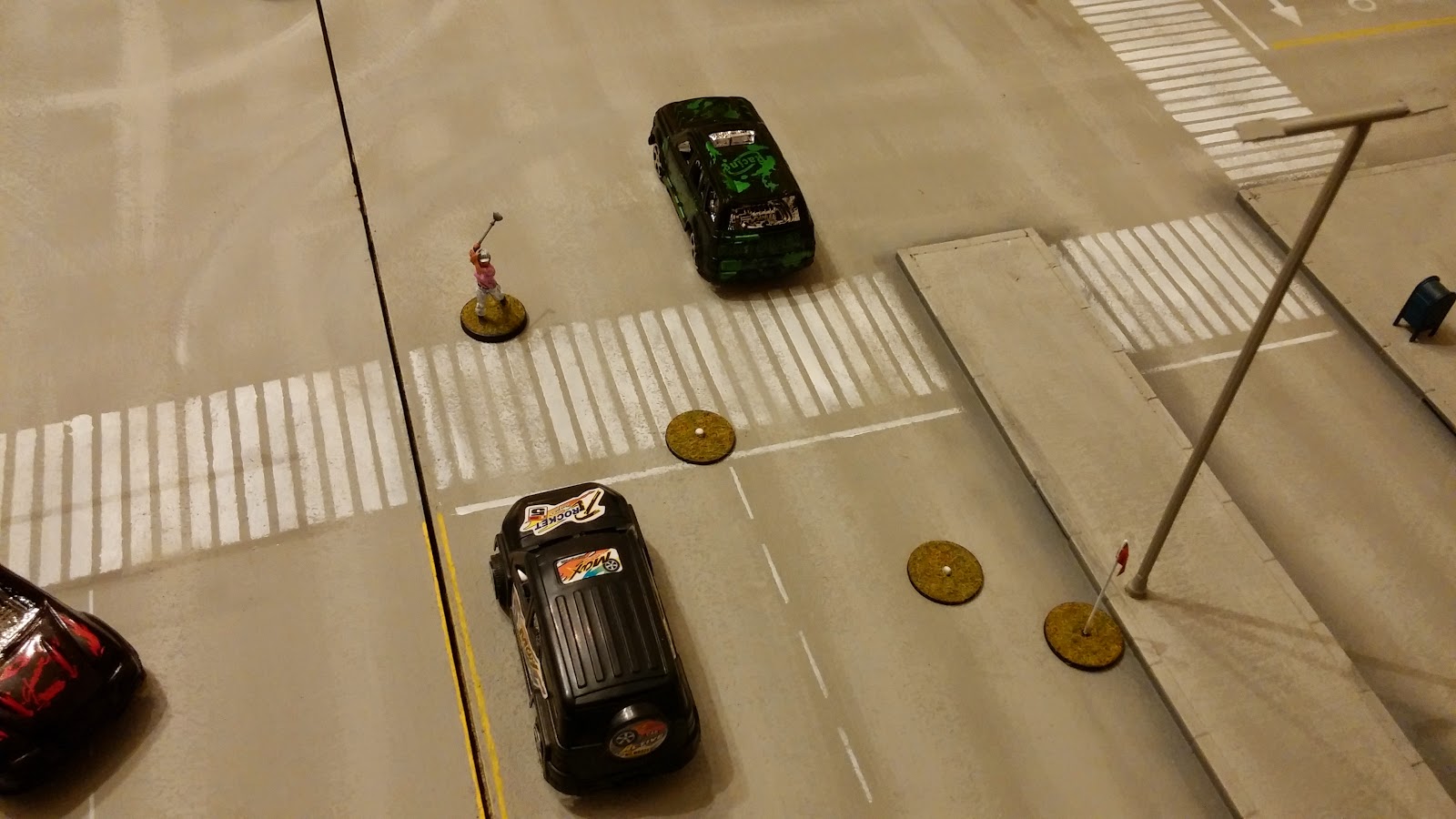 So did the other golfer and Rick.  Poor Daryl was left behind shooting crossbow bolt after bolt.  If most had hit, it would have been a completely different story... 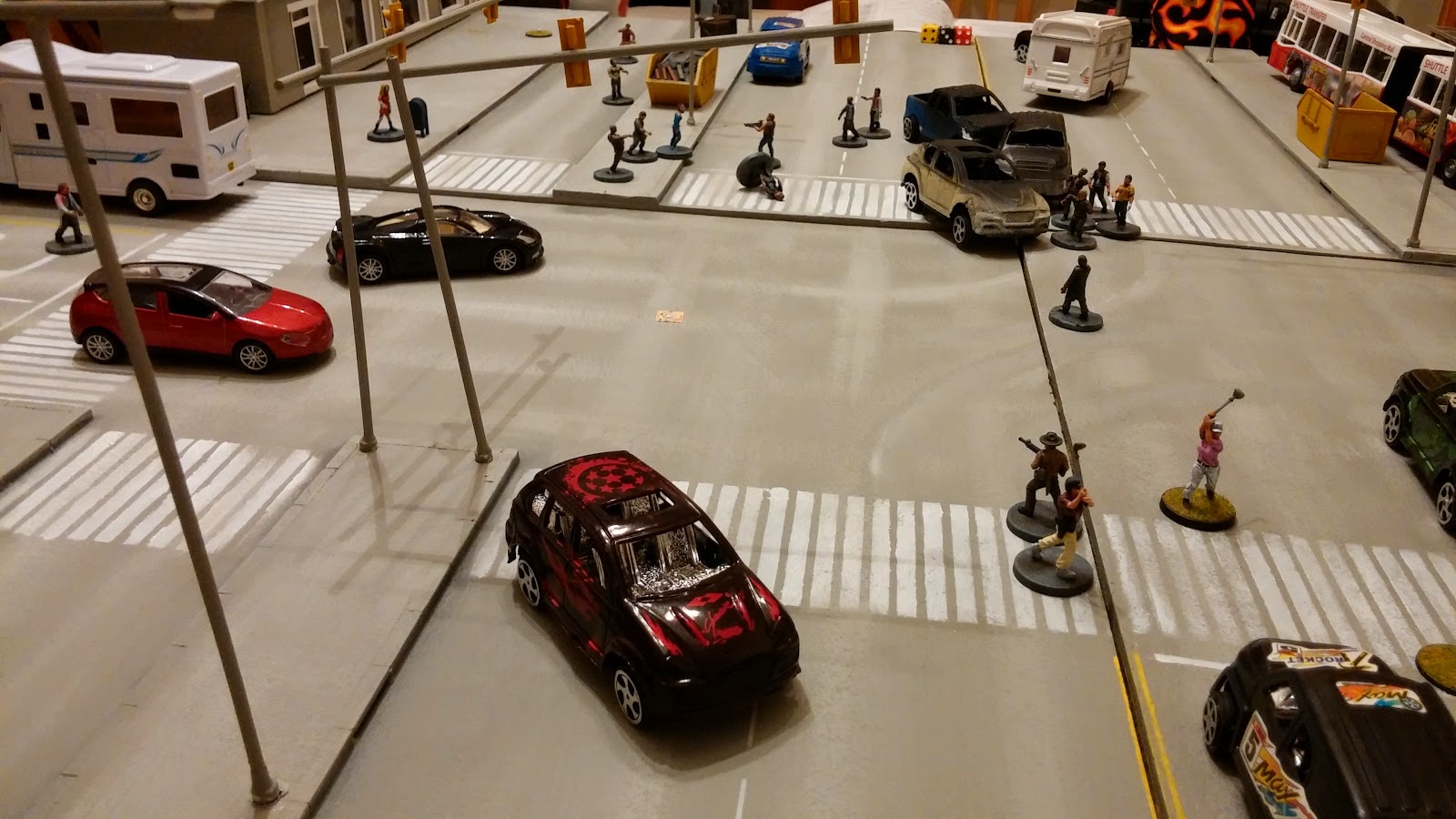 And here we are for the next hole.  We actually managed to achieve a birdie again on this one.  And all four survivors managed to...well...survive! 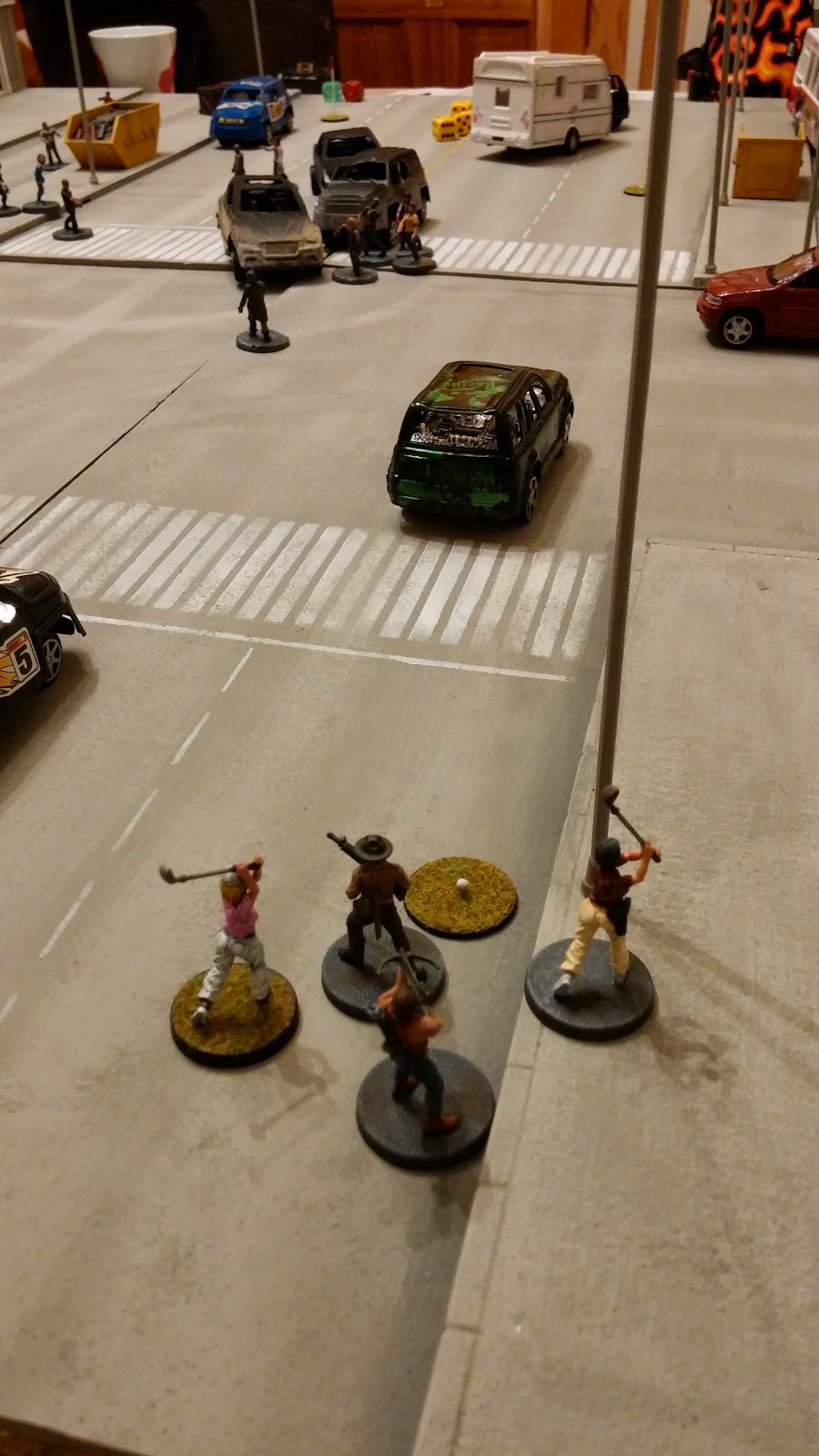 And after all that, not one ricochet from a golf ball!

We agreed we had enjoyed the game immensely, but needed to tweek the rules further, making Zeds appear on a 5+ and creating 1D6+3 Zeds at the start of the game.  The reason for this was that the game of golf got a little lost in the middle of trying to survive.  Which may sound a little odd, given that it's staged in the middle of the apocalypse, but there you.

Another upshot though is we have a nice set of house rules that allow us to take things one step further into the insane world of Urban Golf!