What a Pair of Aerosols!

Aerosol.  A player who rarely hits the ball in a consistent line.  One who sprays the ball.

Well, it's fair to say we are addicted.  THW's Zombie Golf isn't just a wonderful simulation of a game of golf, filled with challenges as you try and use the right balance of Power and Skill to get the ball where you want it.  Its also a fantastic game of Zed bashing.  And with the two concepts combined, it's brilliantly simple game mechanics makes for a simply brilliant game.  So much so we have thought of a fantastic variant to play next session.  But I get ahead of myself...

We continued playing where we had left off the previous week, ready to tee off on the fifth hole of the Riverside Golf Course.  Our cup was 40" away, concealed from sight by a copse of trees.  With three Zeds wandering about the tee, this game could honestly go any way... 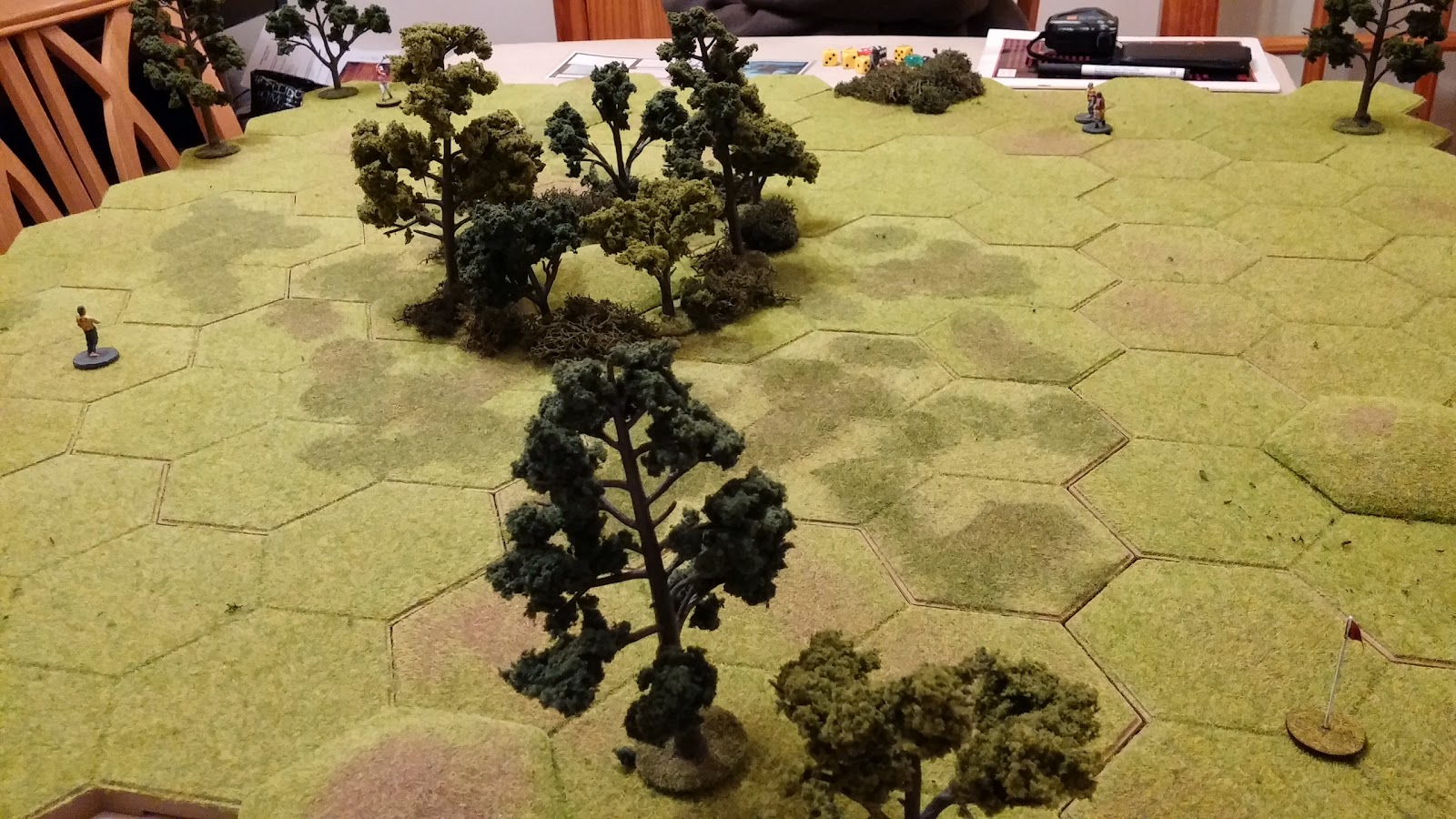 As you can see, it looked like there was plenty of time to take our shots and keep the Zeds at something more than a good arms length away. 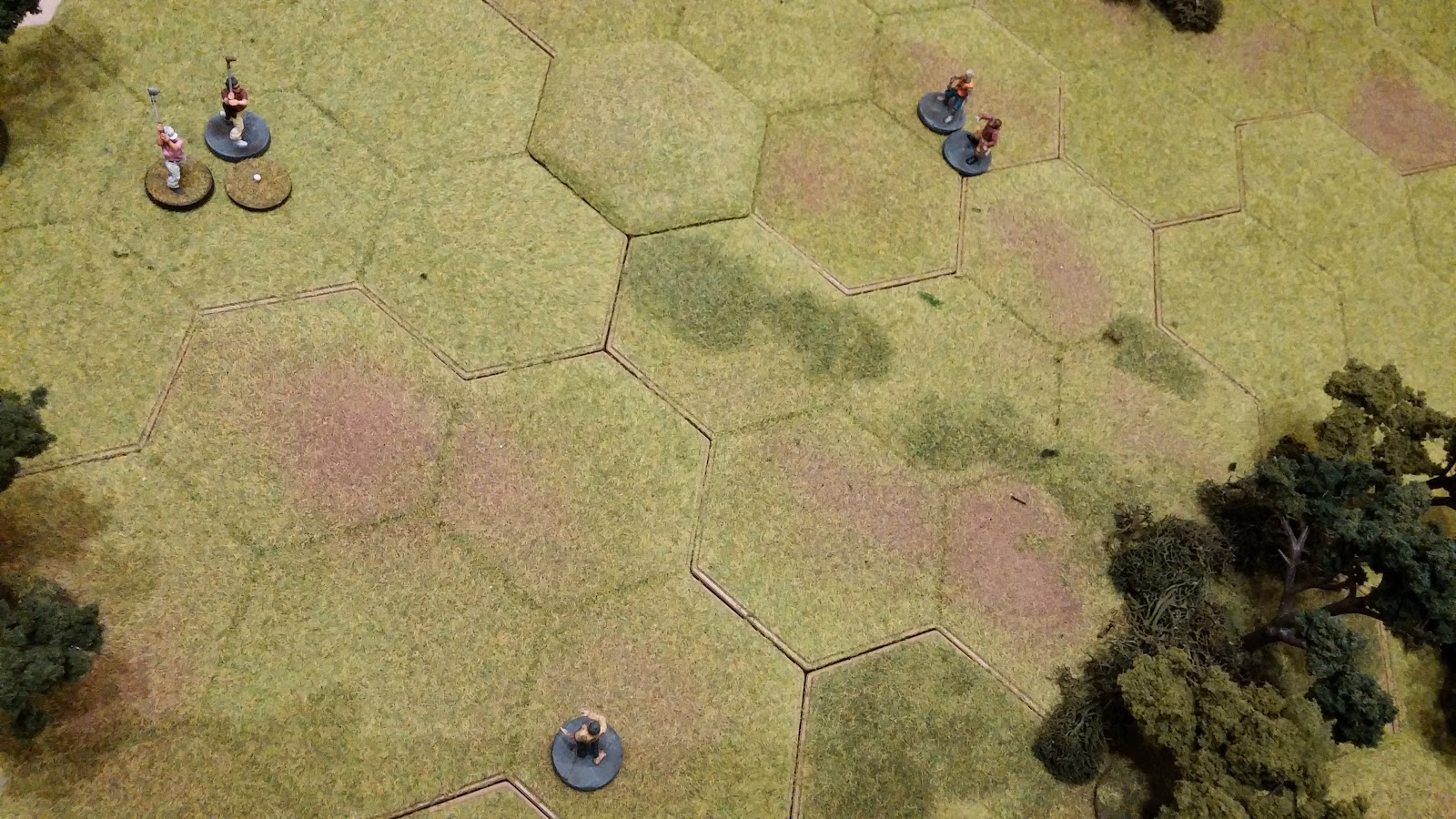 But as the activation dice kept working against us, that seemed to be little more than a futile hope. 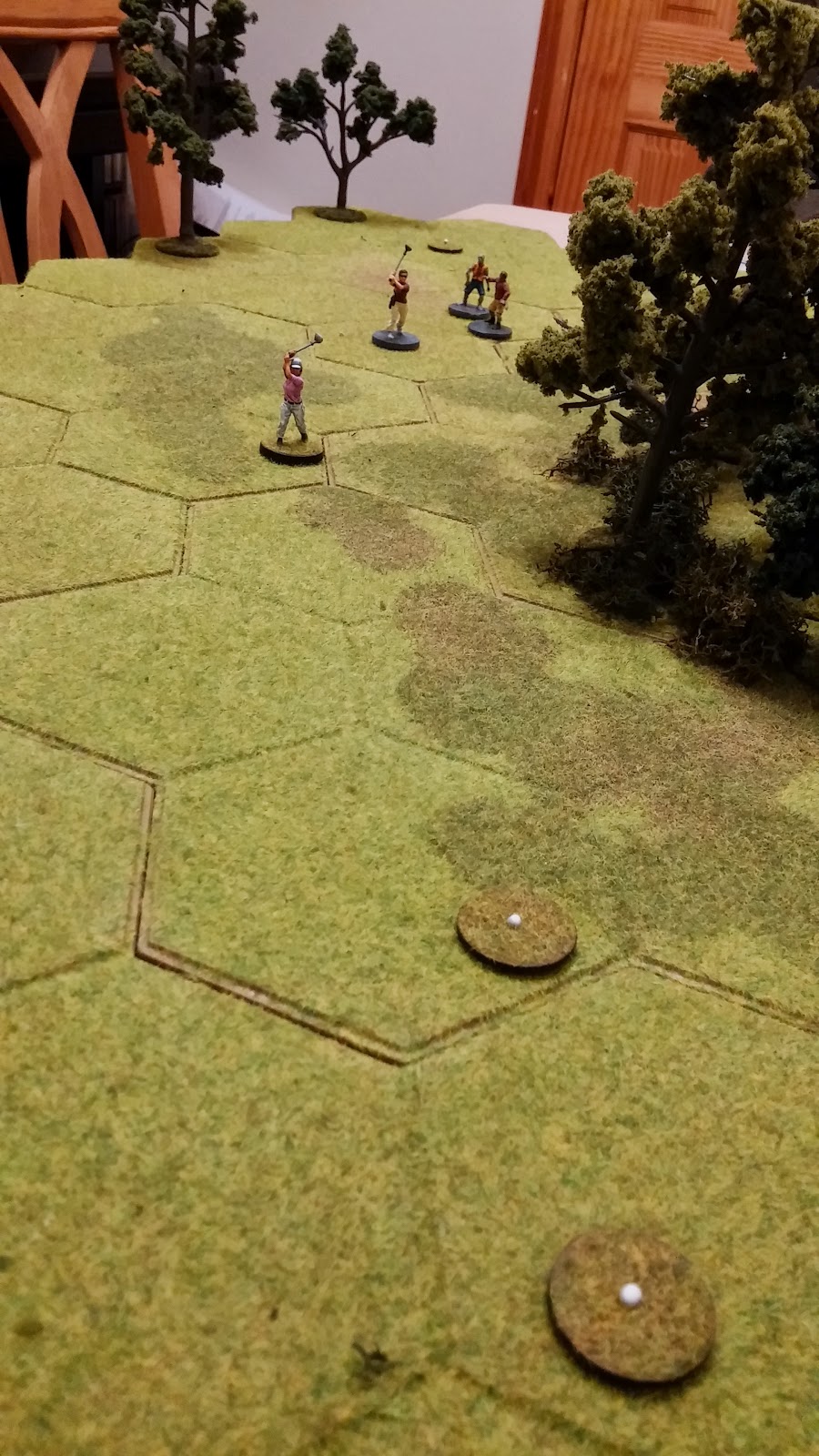 Look at this sequence. 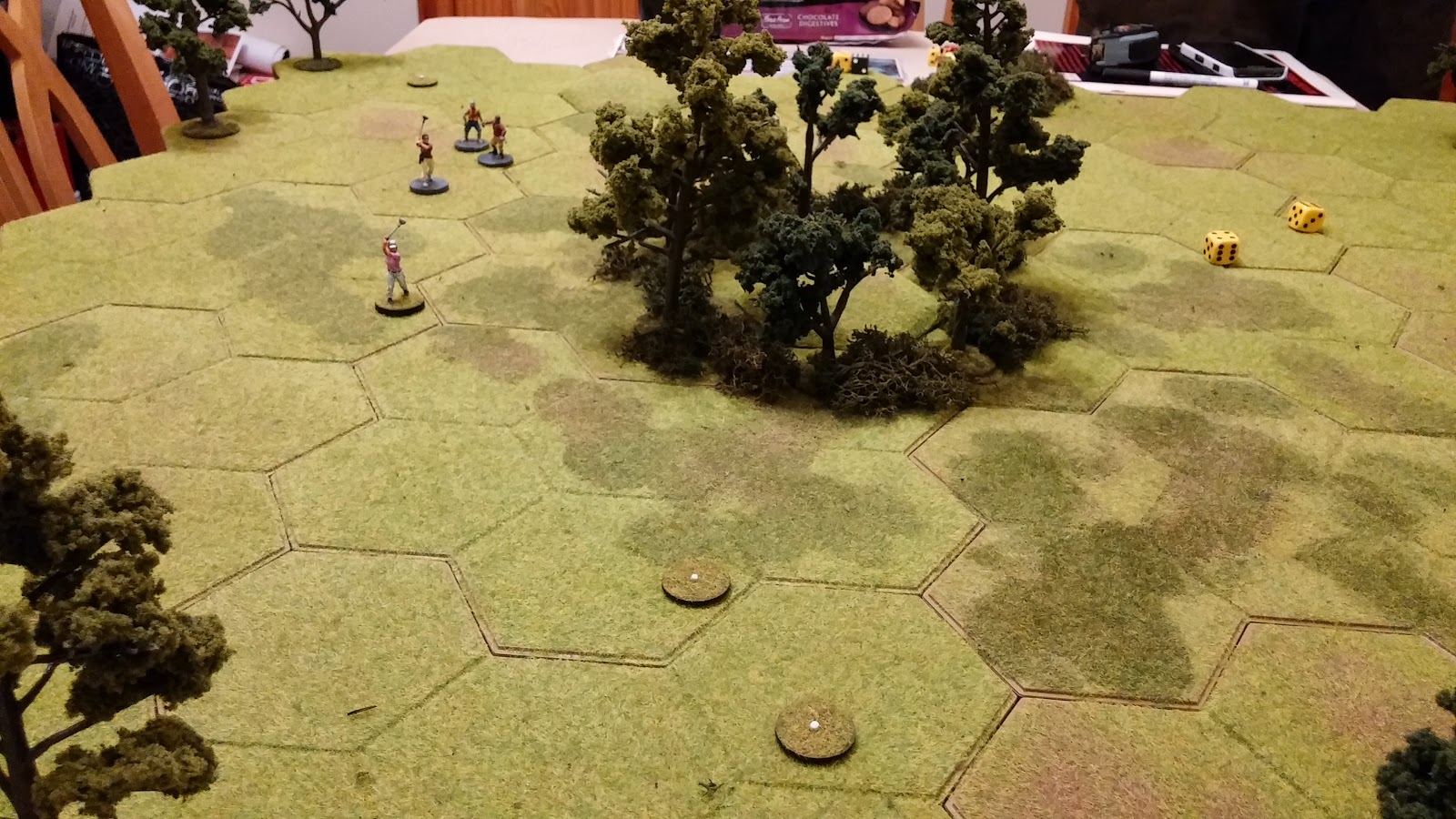 It's like a slow-mo as the Zeds start gaining ground. 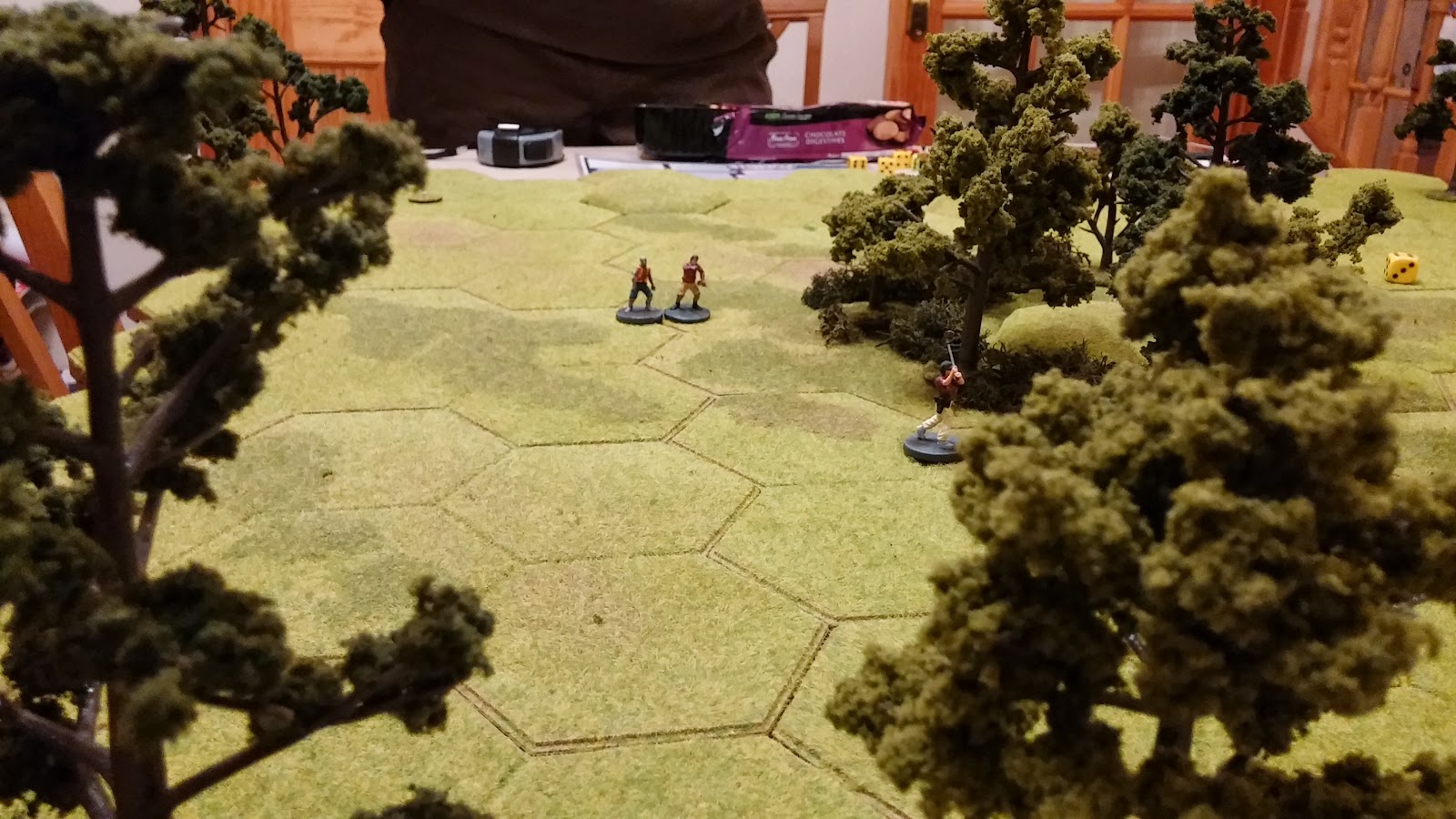 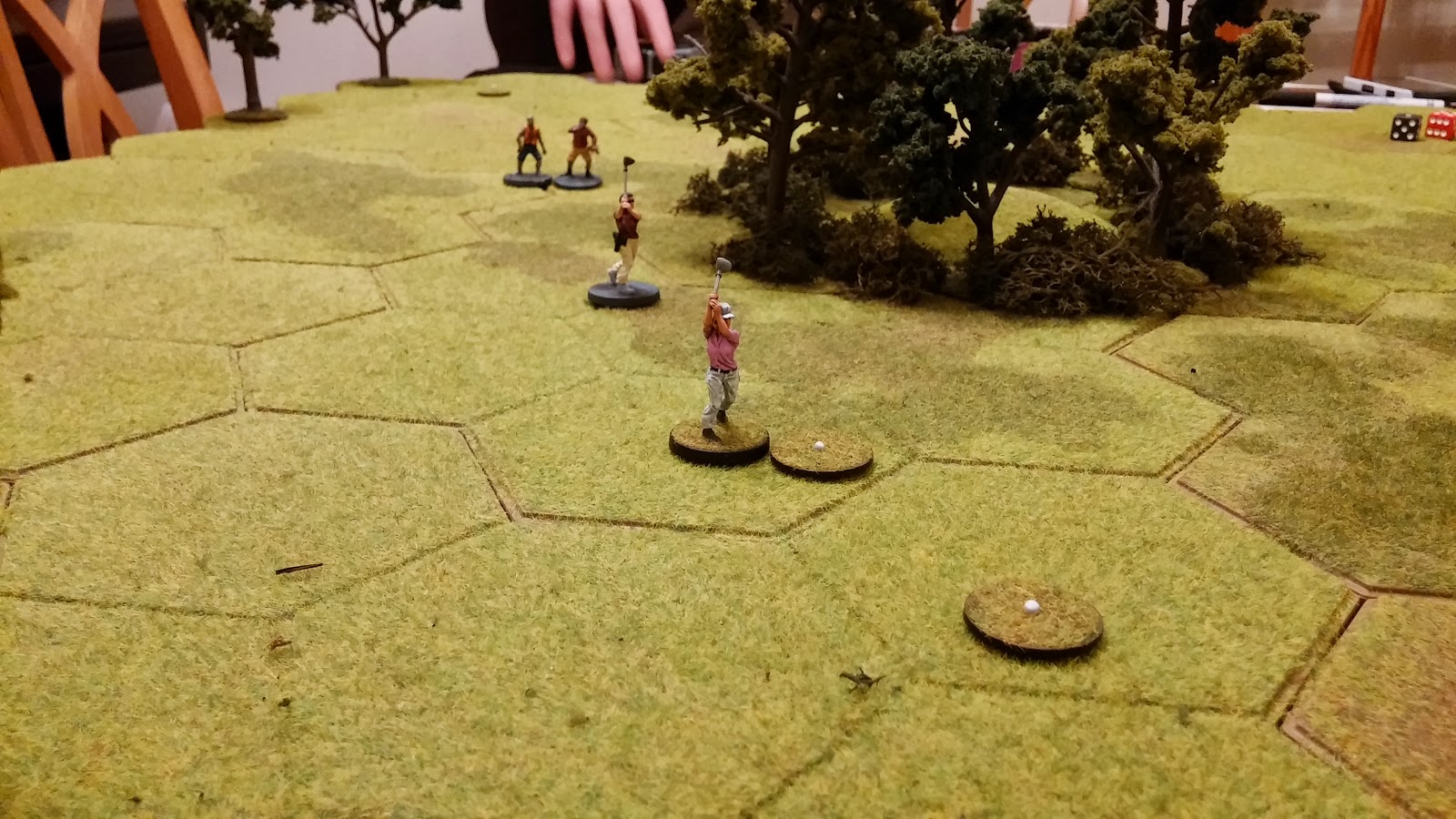 And with another set of unimaginably unhelpful activation dice rolls, we soon found ourselves surprised by Zeds.  And with some equally terrible Surprise check rolls (fail two), this poor unfortunate golfer found herself outnumbered and only able to defend herself with a single dice.  Thankfully the resultant dice rolls were terrible and the melee ended in stalemate. 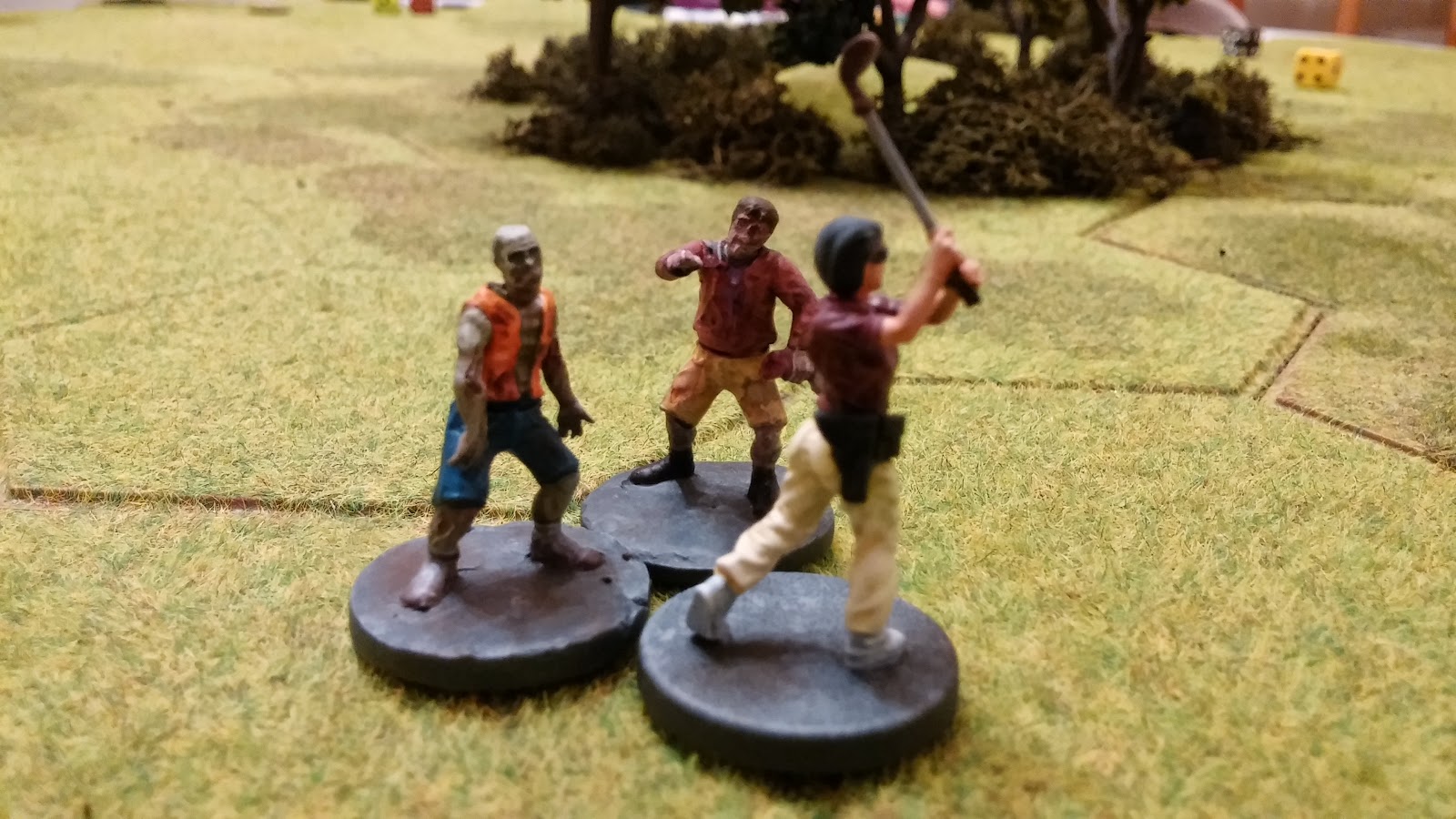 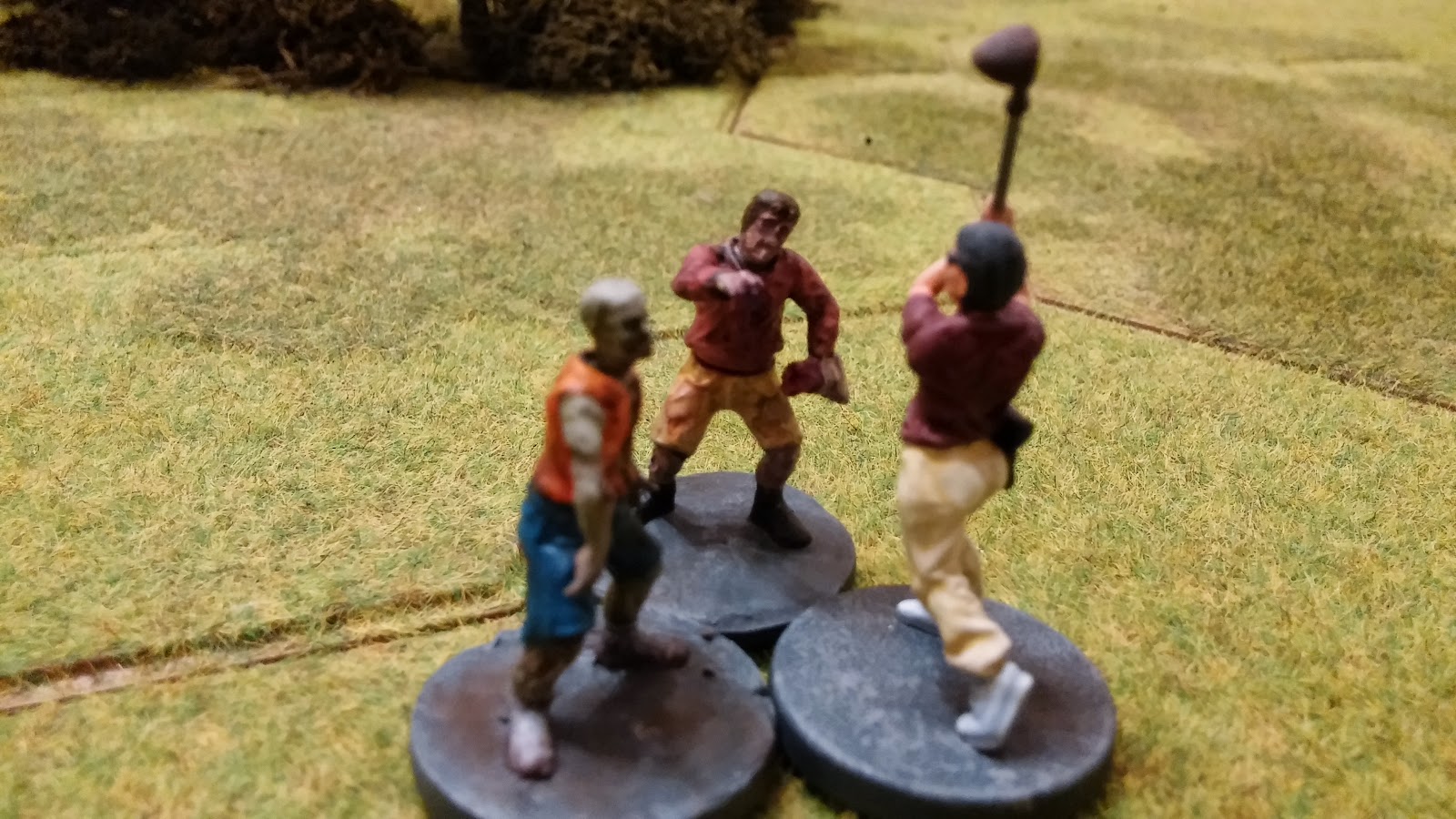 Then she ran away and managed to rally 18" away from the Zeds.  Conveniently, she was now only inches away from her golf ball.  Some would say it was a deliberate stunt... 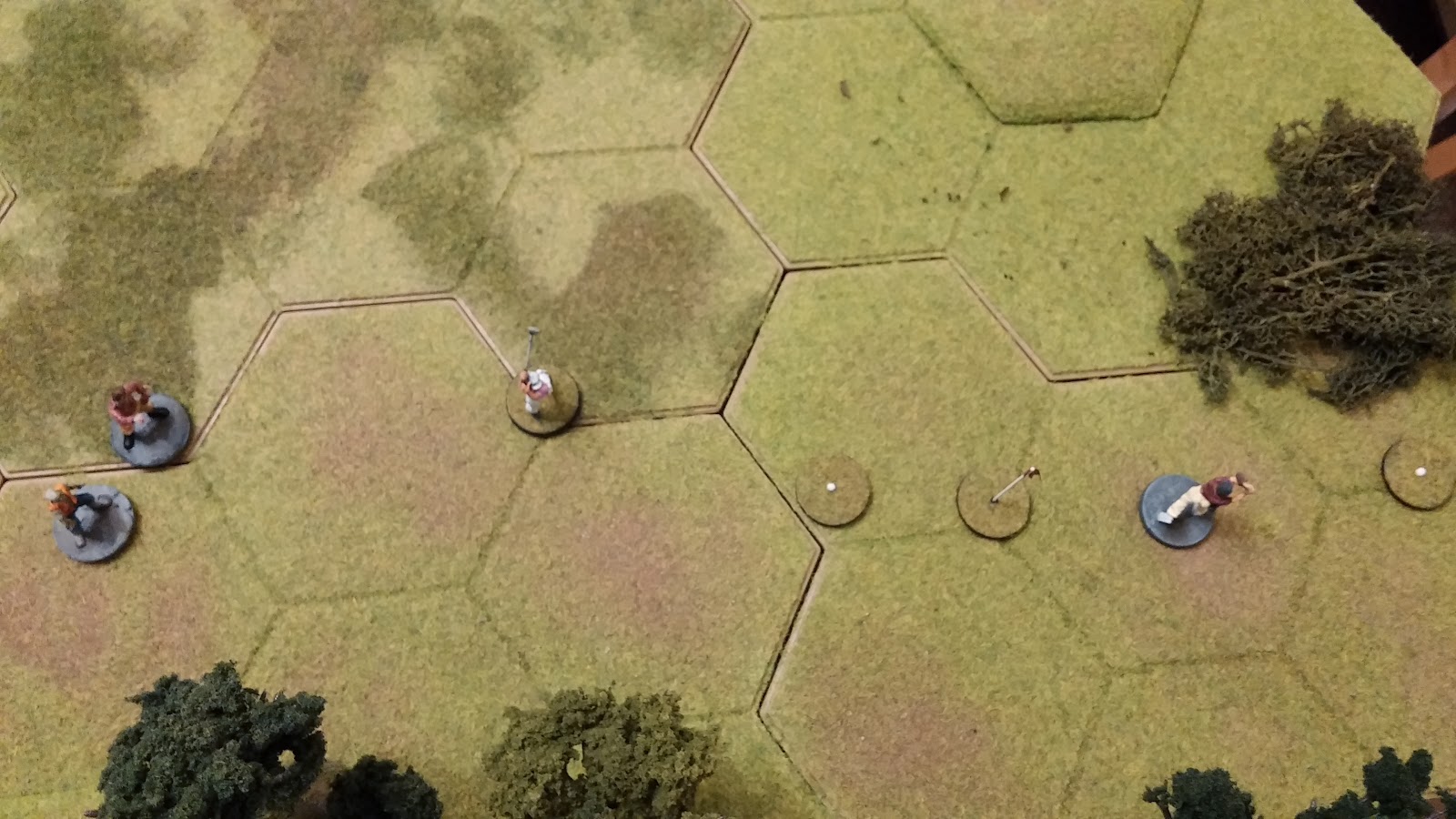 Denied their prey, the Zeds made straight for my own golfer.  Not enough to have the activation dice go against me, I failed my melee rolls spectacularly and went down.  It wasn't looking good.  Especially when my opponent only managed to shoot one of the Zeds. 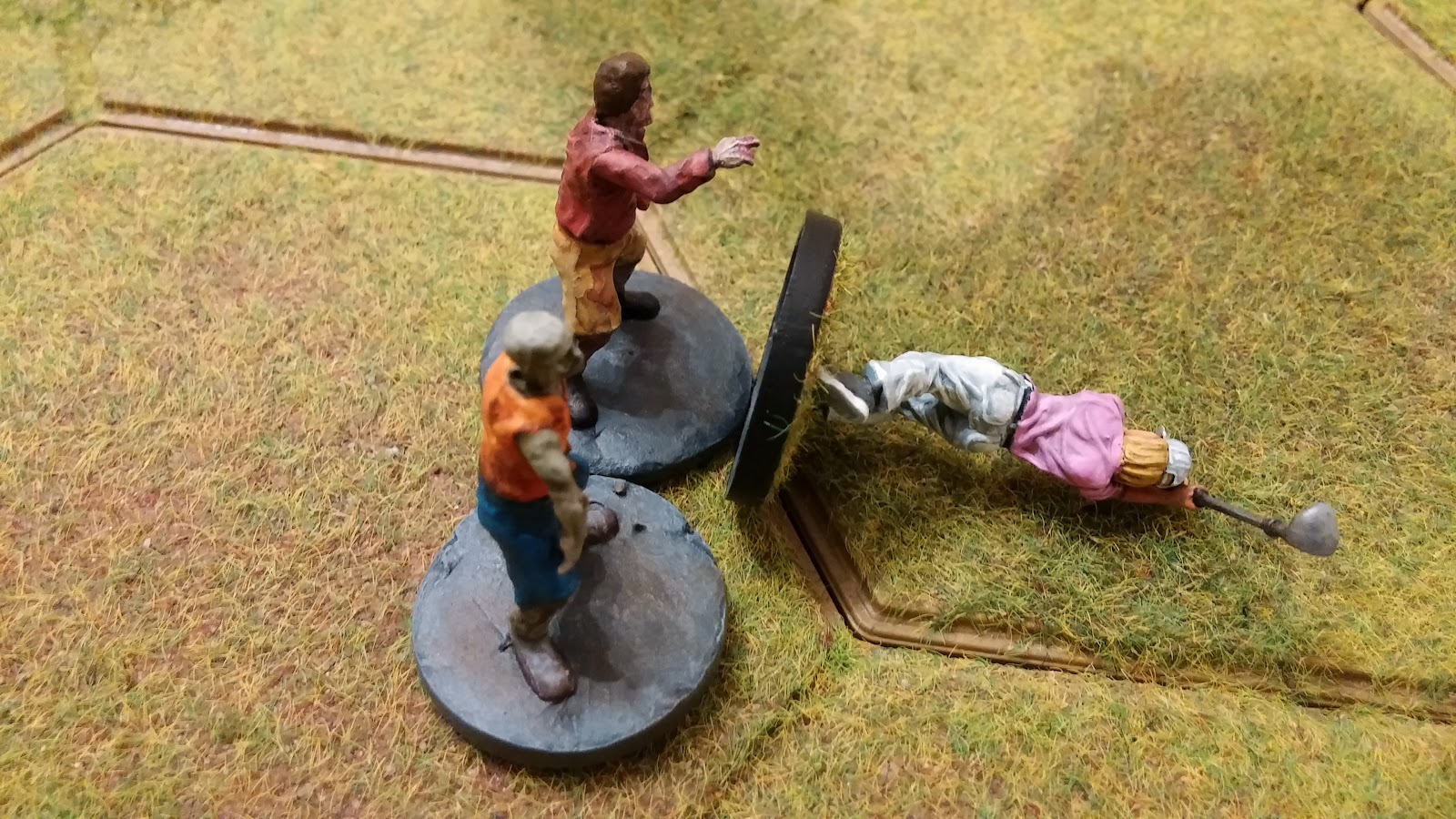 Thankfully, I mamaged to activate and get out of harm's way.  We both then set about the remaining Zed with our trusty irons.  This was a good thing, because by now we were overshooting the cup again and again.  it was a bit like Gestalt therapy.  Except with Zeds instead of cushions. 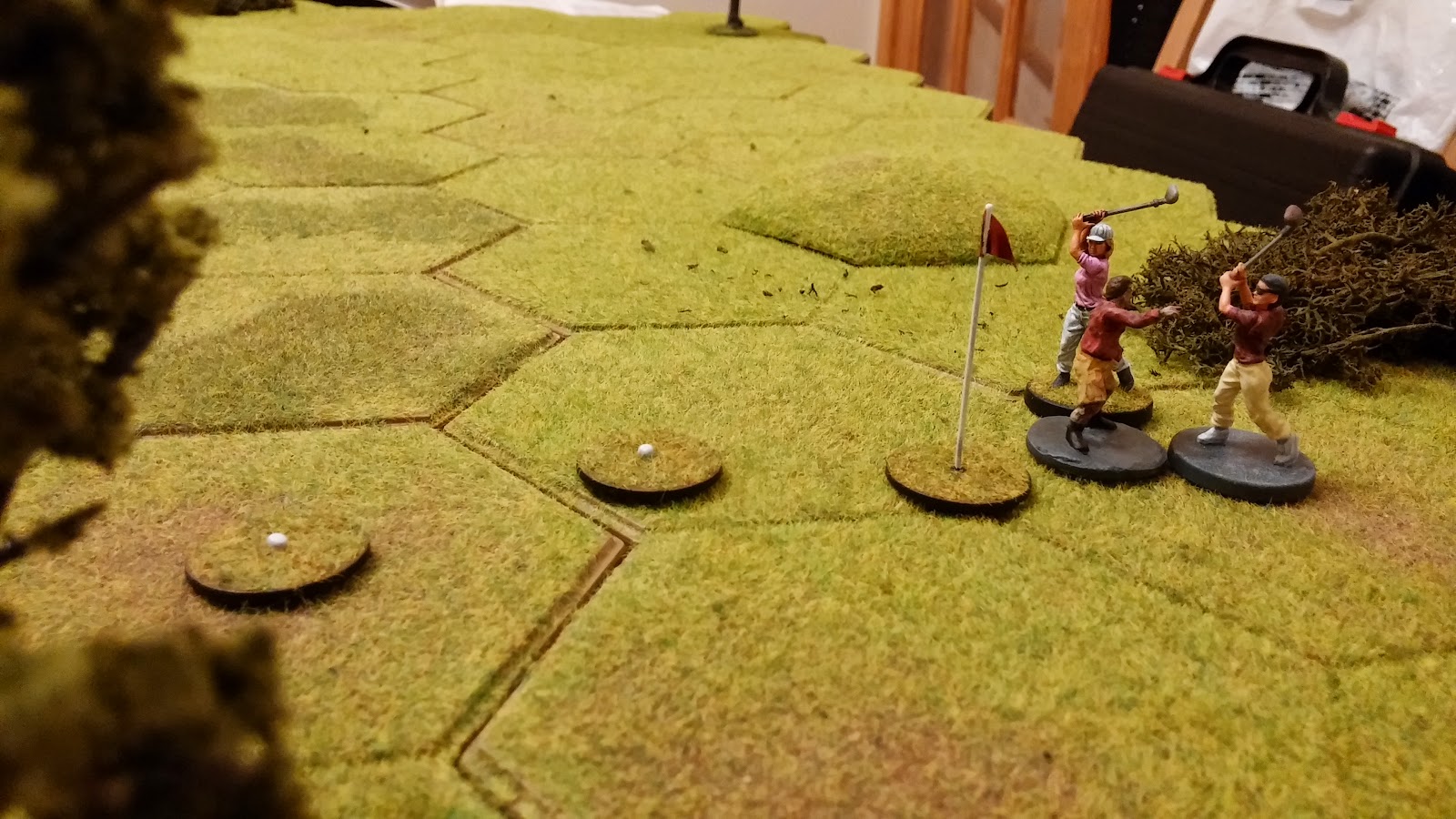 The rest of the course had a lot of wild shots and jammy recoveries.  It seemed to be a night of pass one dice.  To say our shots were erratic would be a generous statement.  Apart from this next one though.  I can't believe I was only a half inch short of a hole in one! 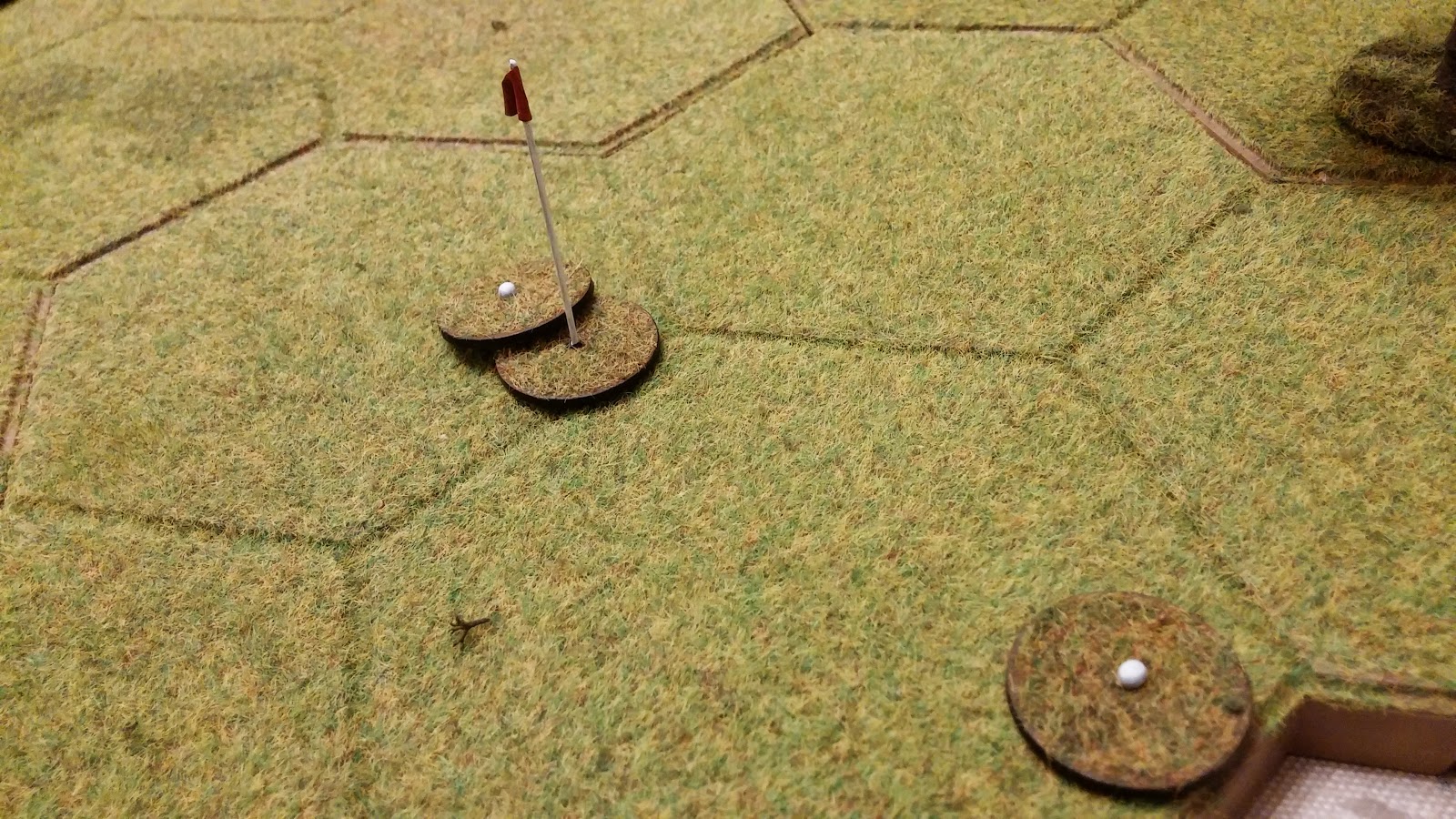 Of course, this was followed by overshot after overshot with the ball rolling round the cup and bouncing out time and again.  Hilarious! 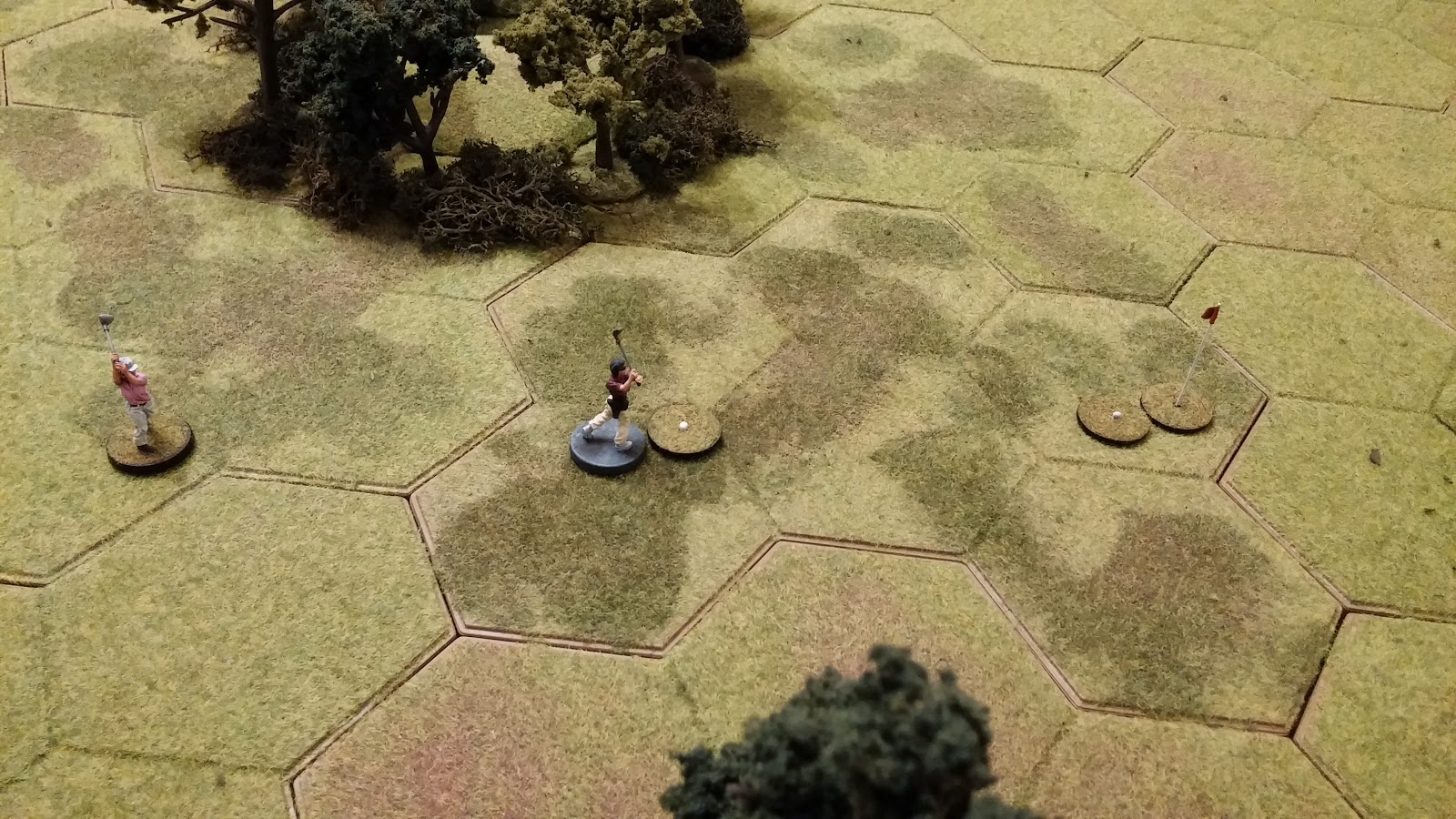 Our game ended with perhaps the greatest surprise of all.  I actually won, with more points per hole and fewer shots.  Here's the final score card of the game.  Just look at all the shots we took! 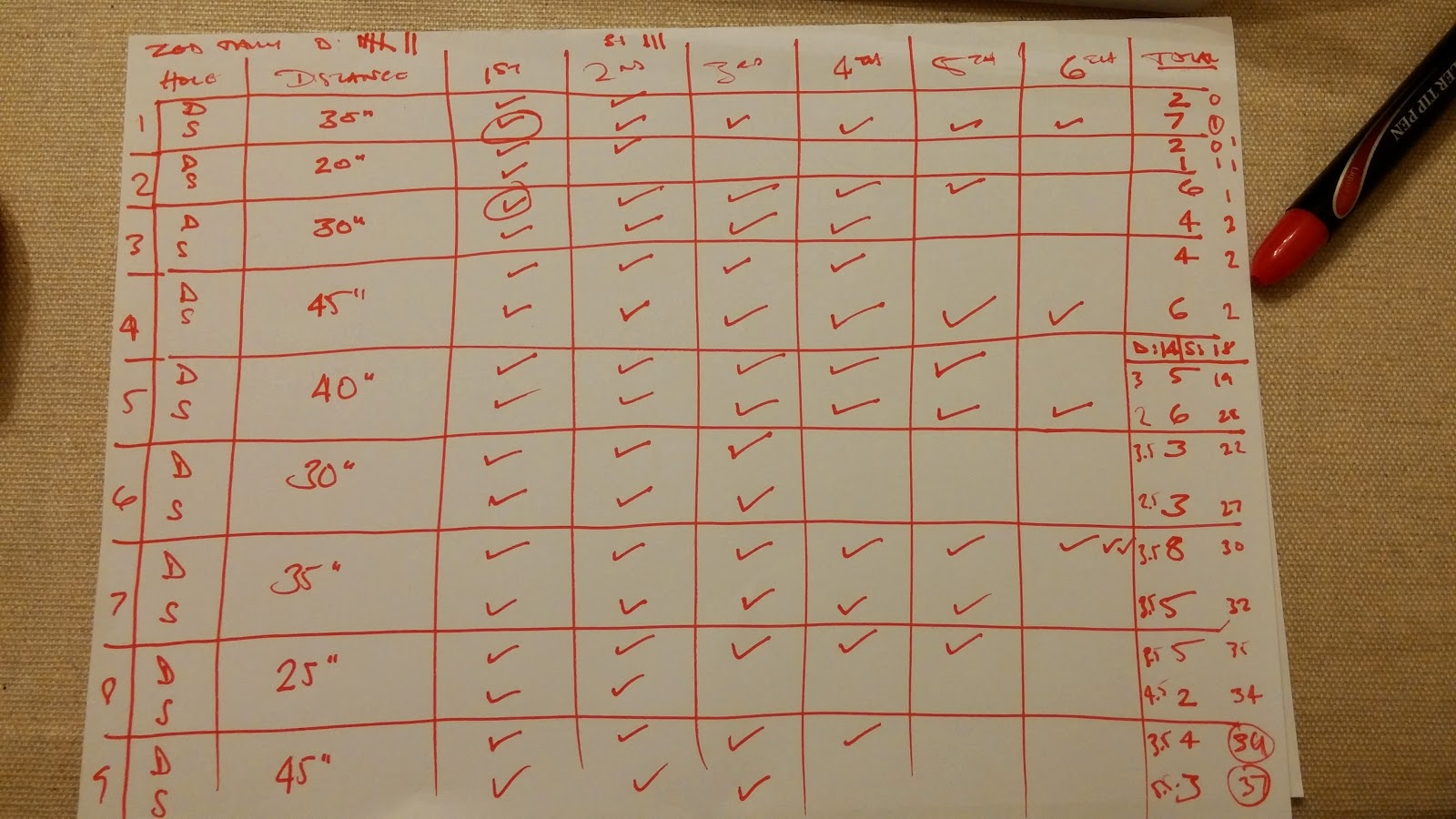 But what a fantastic way to spend an evening wargaming!

Oh, and the variant I mentioned earlier?  We're going to head back to the city for some Urban Golfing.  You know, using some of those practice cups you get for your office scattered around the street.  There'll be a lot more Zeds in the city, so each golfer will be using their own gang to snipe the Zeds away.  And we have some fun rules we're working on for those occasions when the ball bounces off the side of an abandoned car.