A Dark Night in Zedville... 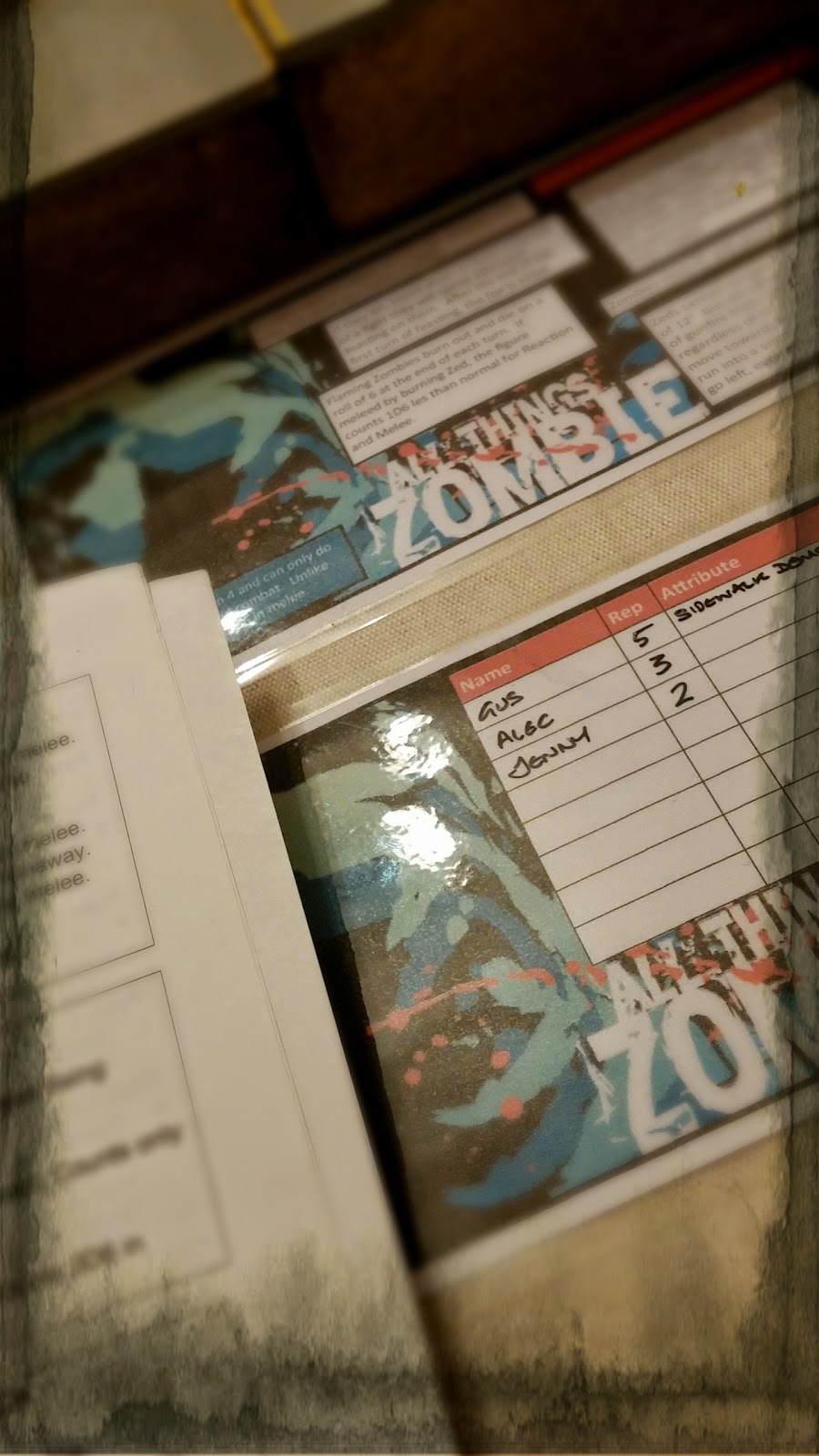 We never thought things could become so bleak so suddenly in a game.  Let alone make you so desperate to see what happens!  Here's how the night went down... 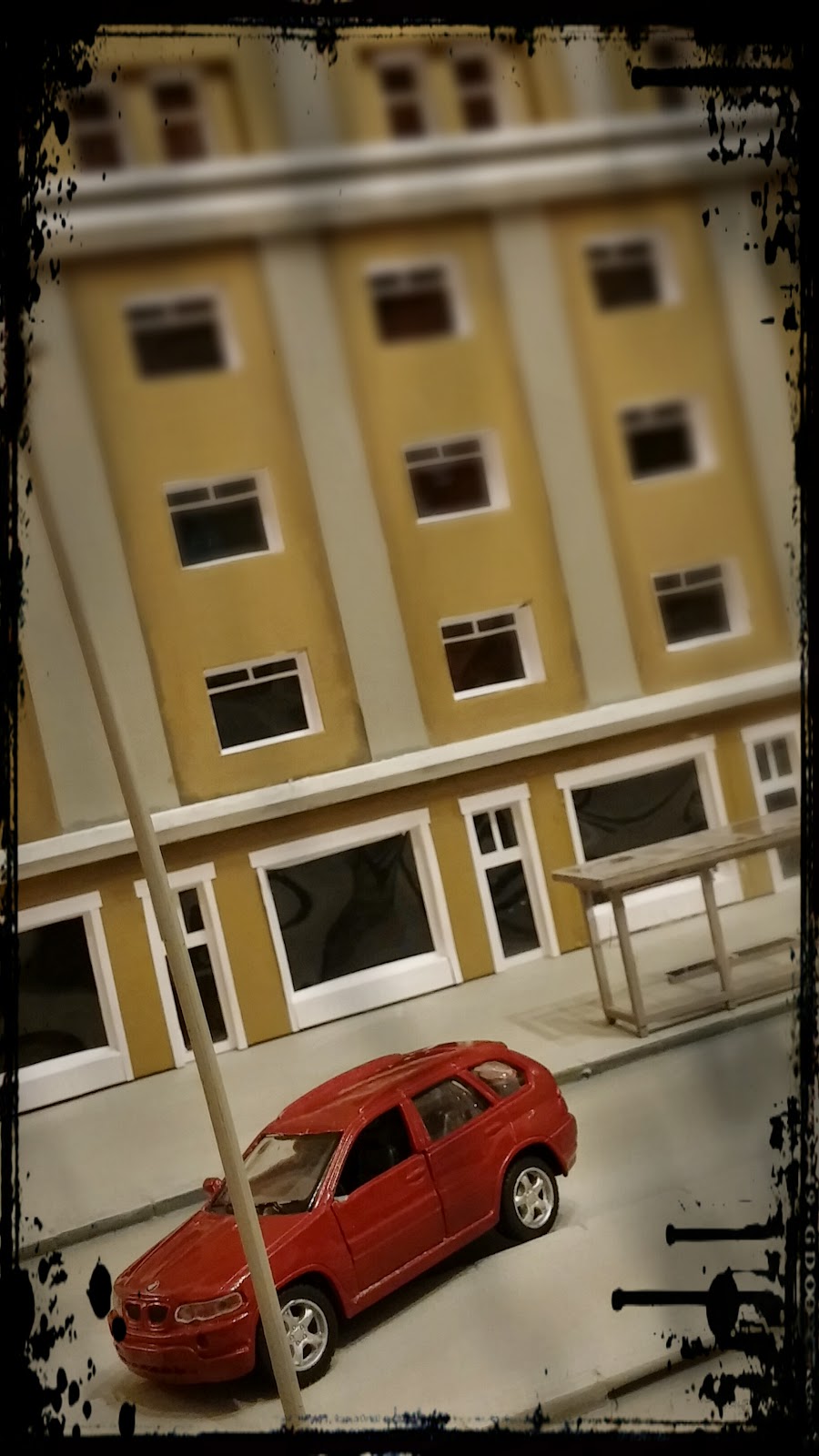 Gus switched off the Mystery Machine's engine and let the RV coast along to its eventual halt.  Those Zeds that had been attracted to the sound of the engine were far behind them out of harm's way.  They came to a halt within running distance of a local police station.  Rick was sure they'd be able to stock up on some ammo and maybe even find some more survivors who might join them. 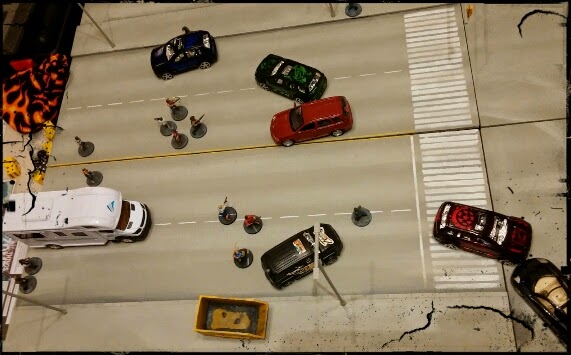 Making sure there were no Zeds nearby, they quickly exited the Mystery Machine and shut the doors as quietly as they could.  Rick and Daryl spread out to cover Lori and Carl.  Meanwhile Gus led Alec and Jenny towards the police station.  Jenny was looking twitchy, but seemed to be holding it together.  They had hardly gone any distance when suddenly they were literally surrounded by eight Zeds who seemed to appear out of thin air.  Before they knew what was happening, Rick and Daryl were shooting them down as fast as they appeared, Lori was blasting away with her pump action shotgun to no avail, her spectacularly useless display of marksmanship matched perfectly by Alec and Jenny.  At least Gus was hitting his mark. 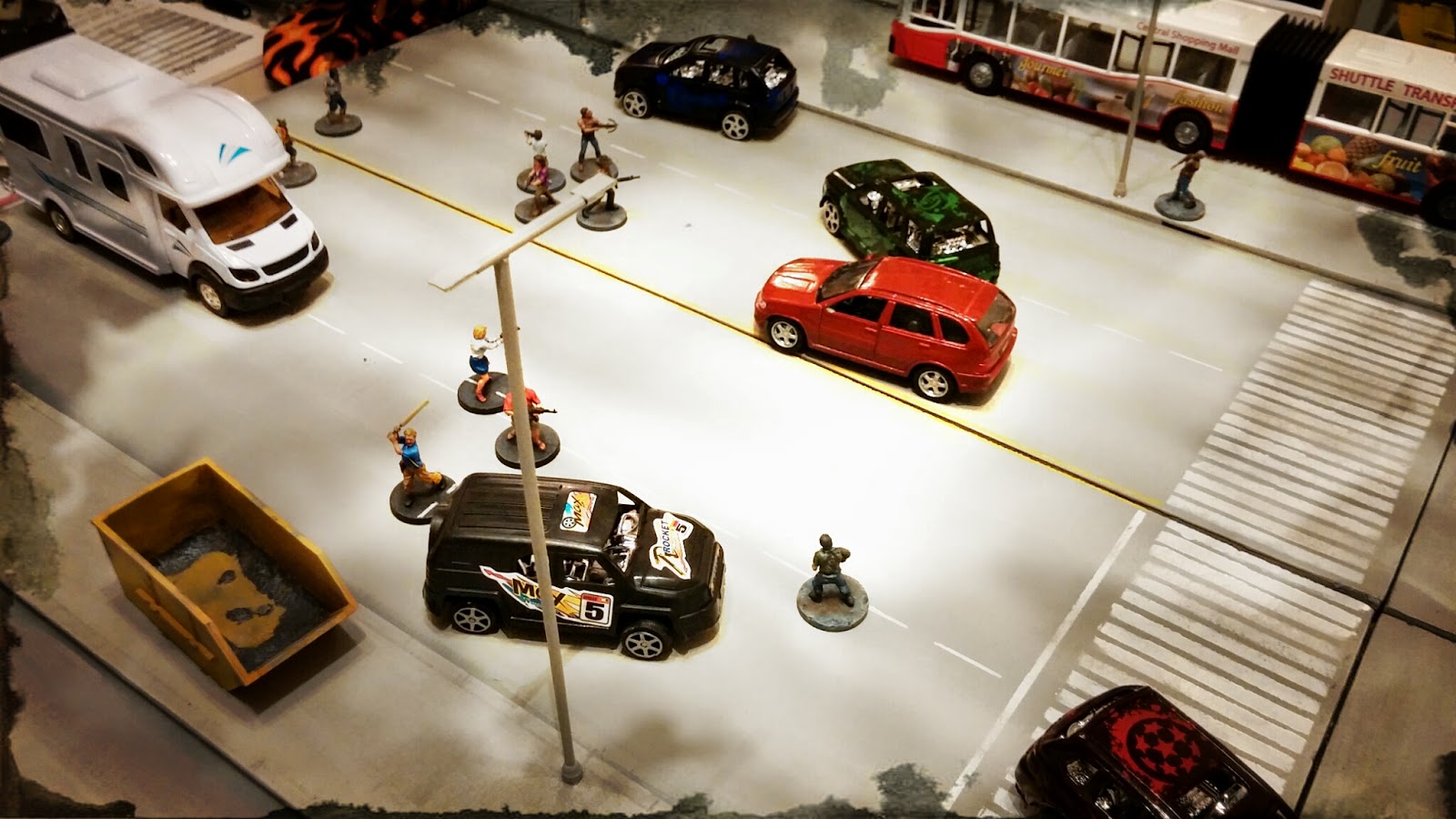 Of course, this attracted an even bigger horde of Zeds, and Lori and Carl were assaulted.  Lori managed to hold her undead assailant at bay, but Carl let out a panicked cry as two Zeds tackled him to the ground.  Daryl turned and fired his crossbow at the one closest to him, causing it to stagger back, but didn't kill it.  Rick turned in time to dispatch the other.  If he'd failed to do so, Carl would have been turned. 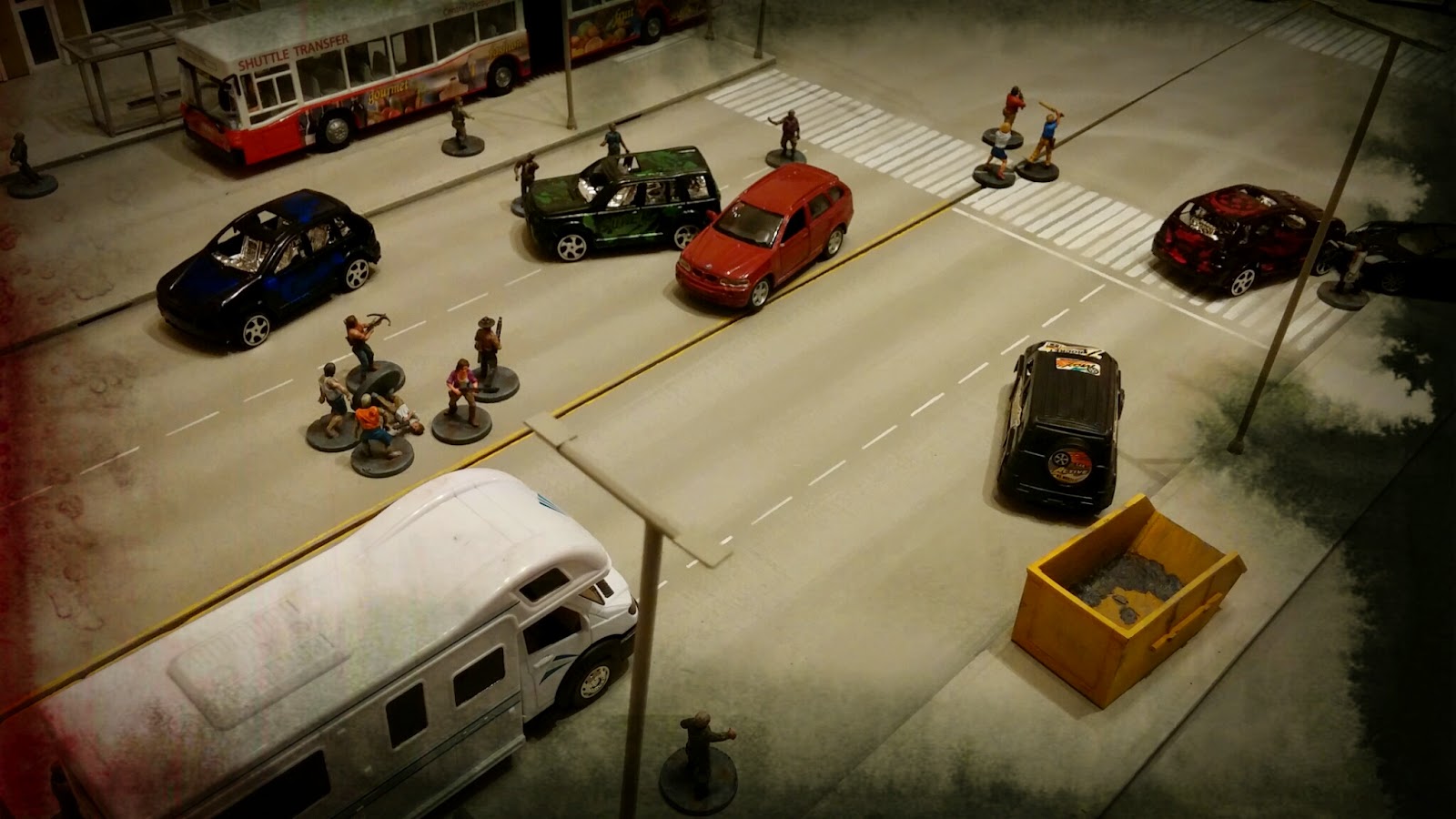 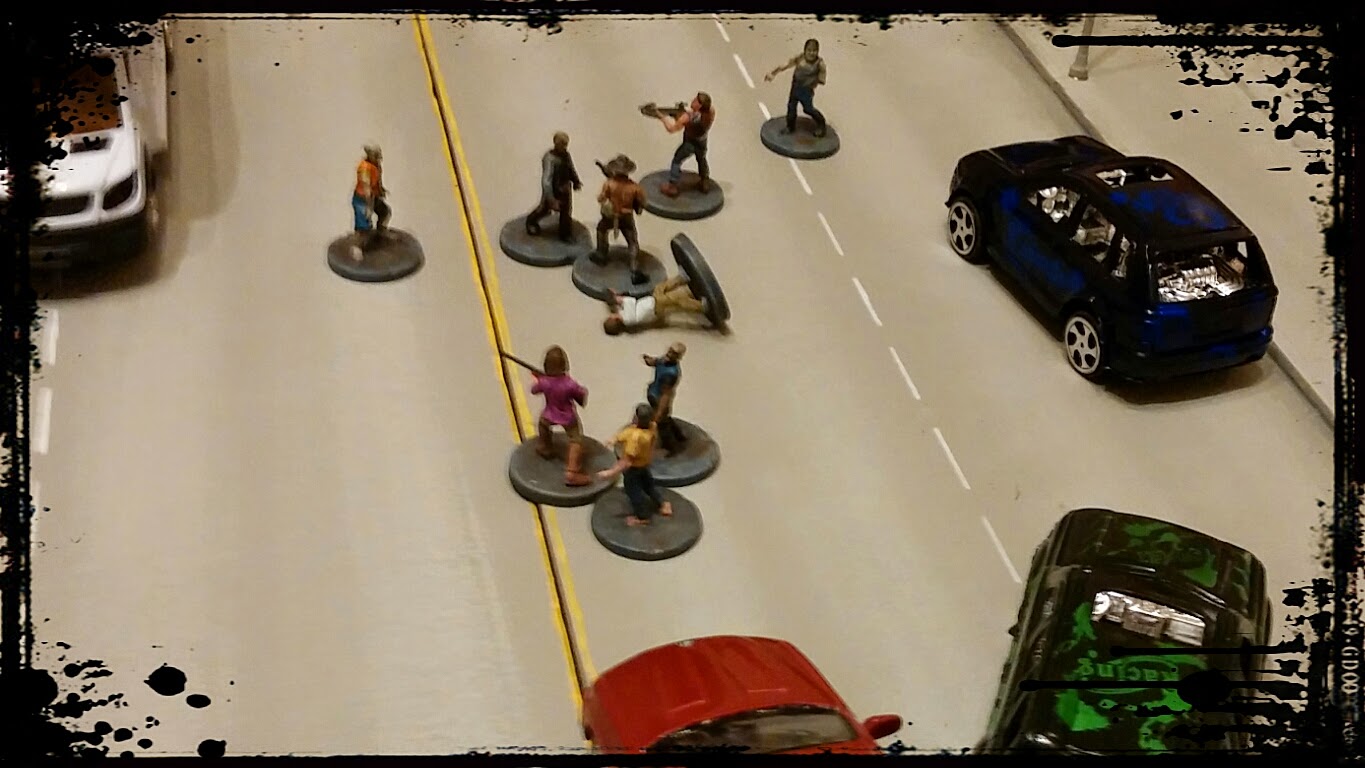 As Gus, Alec and Jenny made a deperate dash for the police station, they were suddenly confronted with more Zeds.  It certainly wasn't helping that thanks to one activation dice roll after another the Zeds were moving before our gangs every turn. 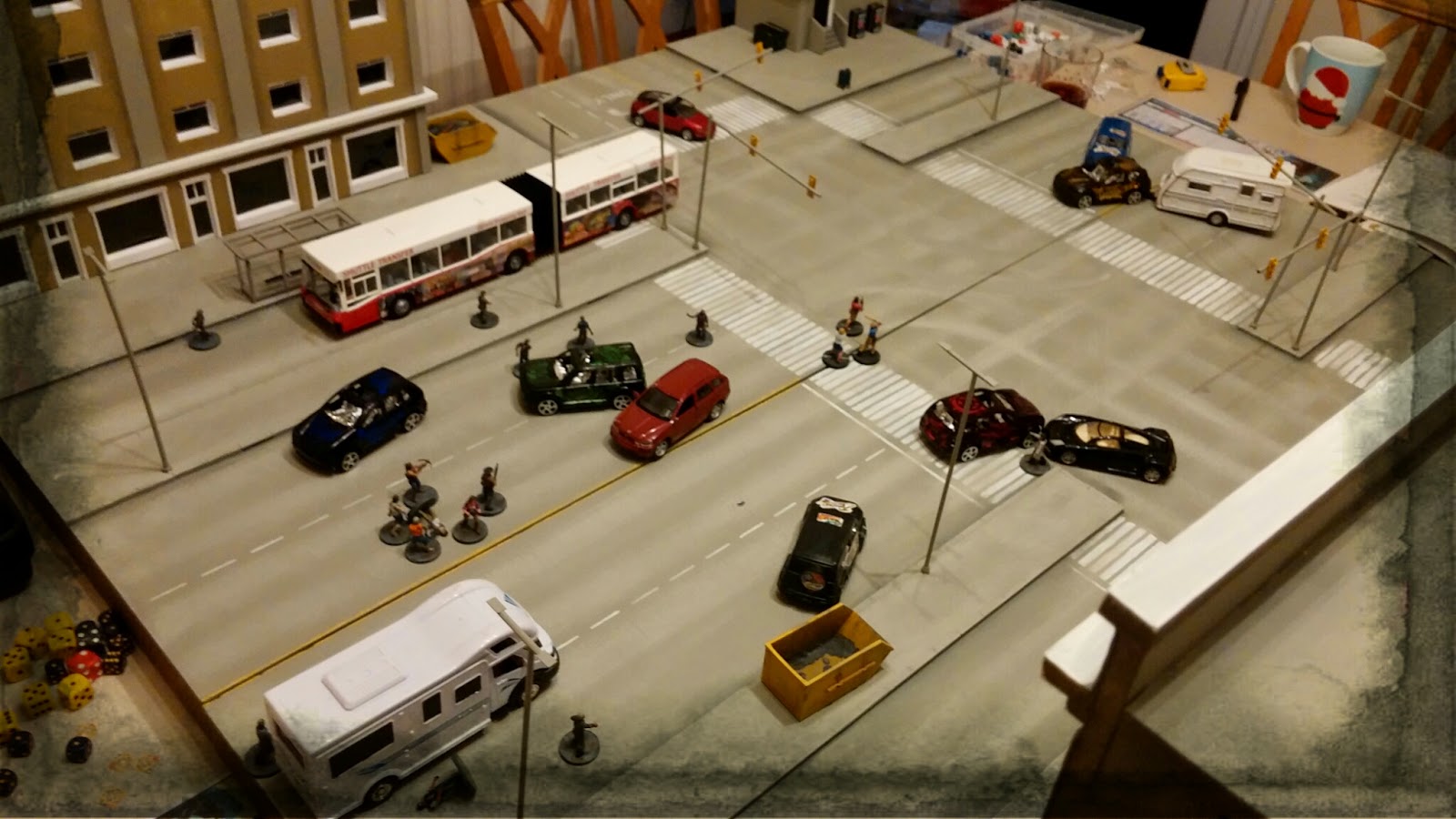 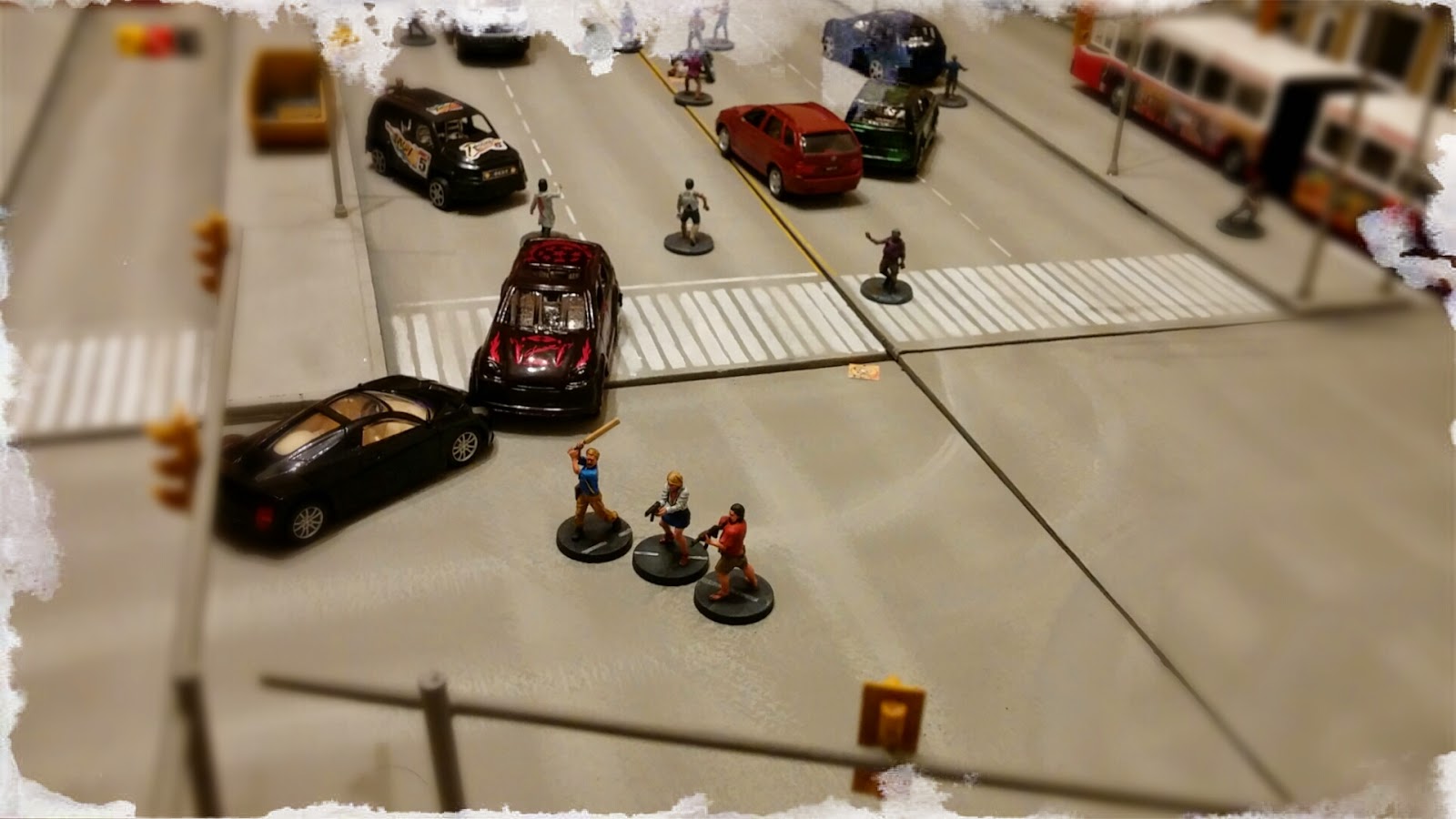 One reached out for Jenny who panicked and ran off in the opposite direction.  Gus and Alec had no choice but to follow after her and try to talk sense to her. It was all beginning to look so familiar. 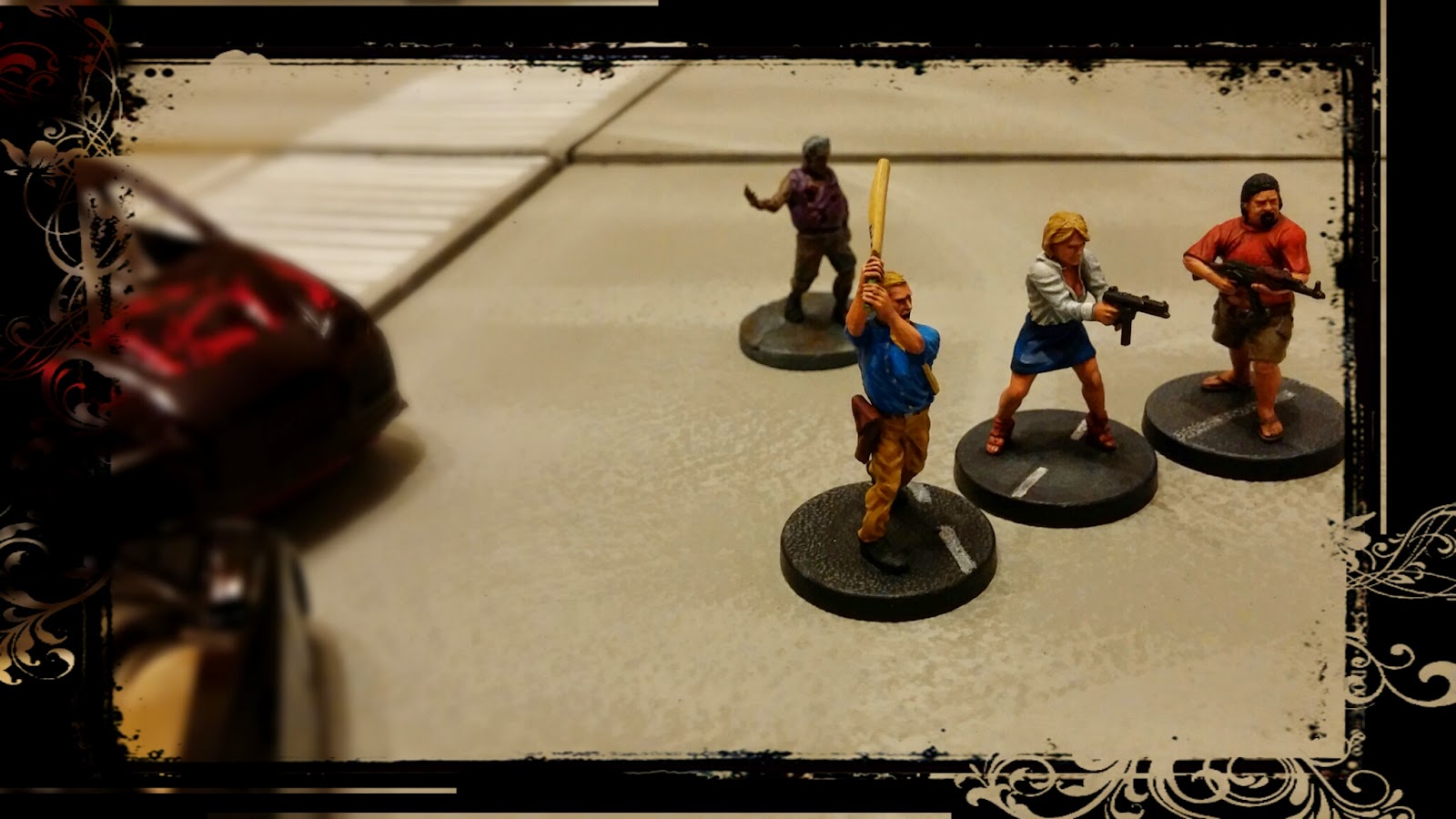 As the assaults went a lot worse than hoped, popping the weasel was the only option left.  Which of course had the usual effect.  More and more Zeds kept appearing. 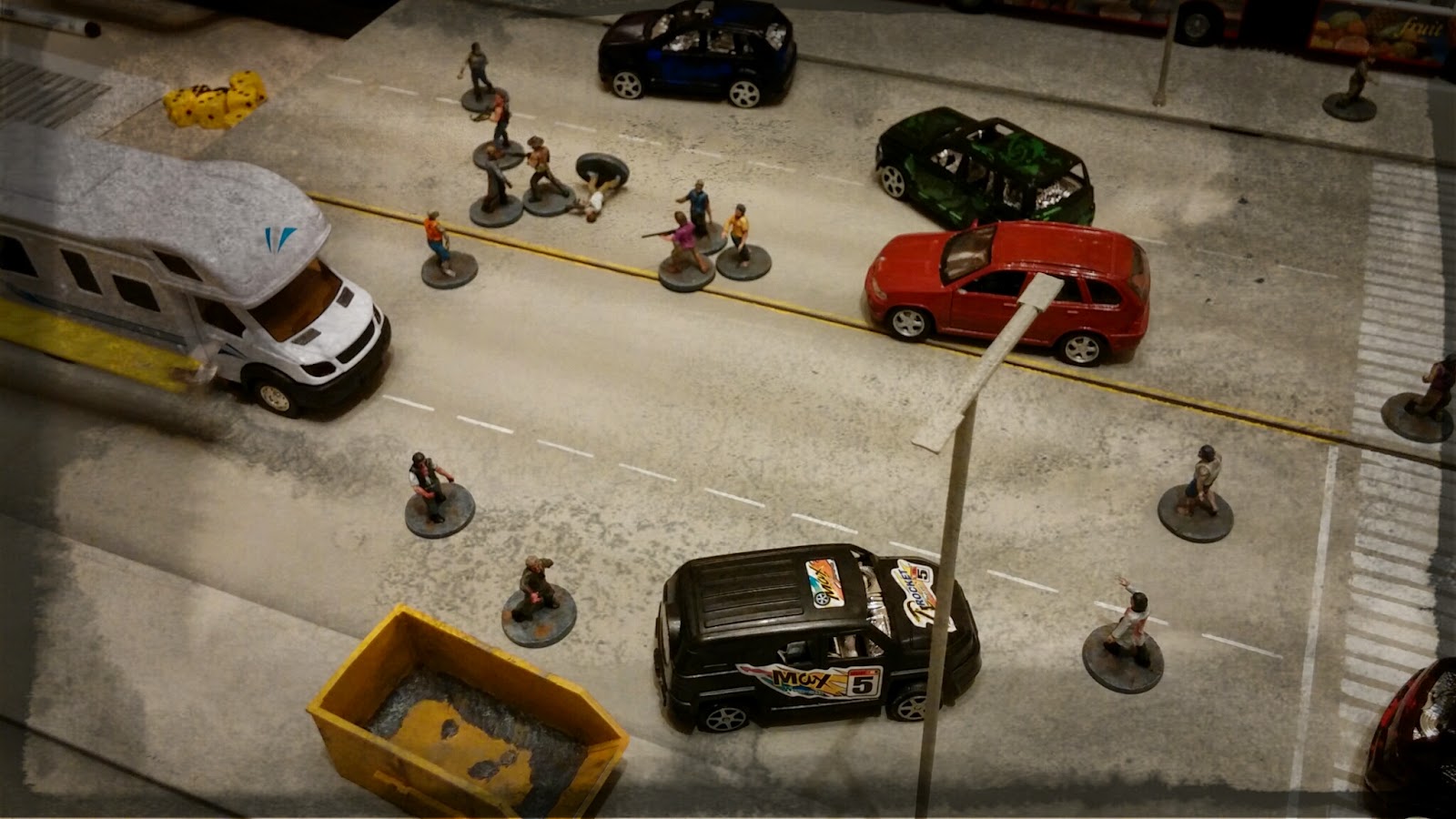 Lori had no option but to break from the combat.  She'd be dead if she stuck around.  At this point Rick and Daryl decided it was a lost cause and picked up Carl and bundled him into the back of the Mystery Machine.  Lori dashed for the driver's seat, unable to shoot at the two Zeds she had been locked in combat with a moment before.  It was time to get out. 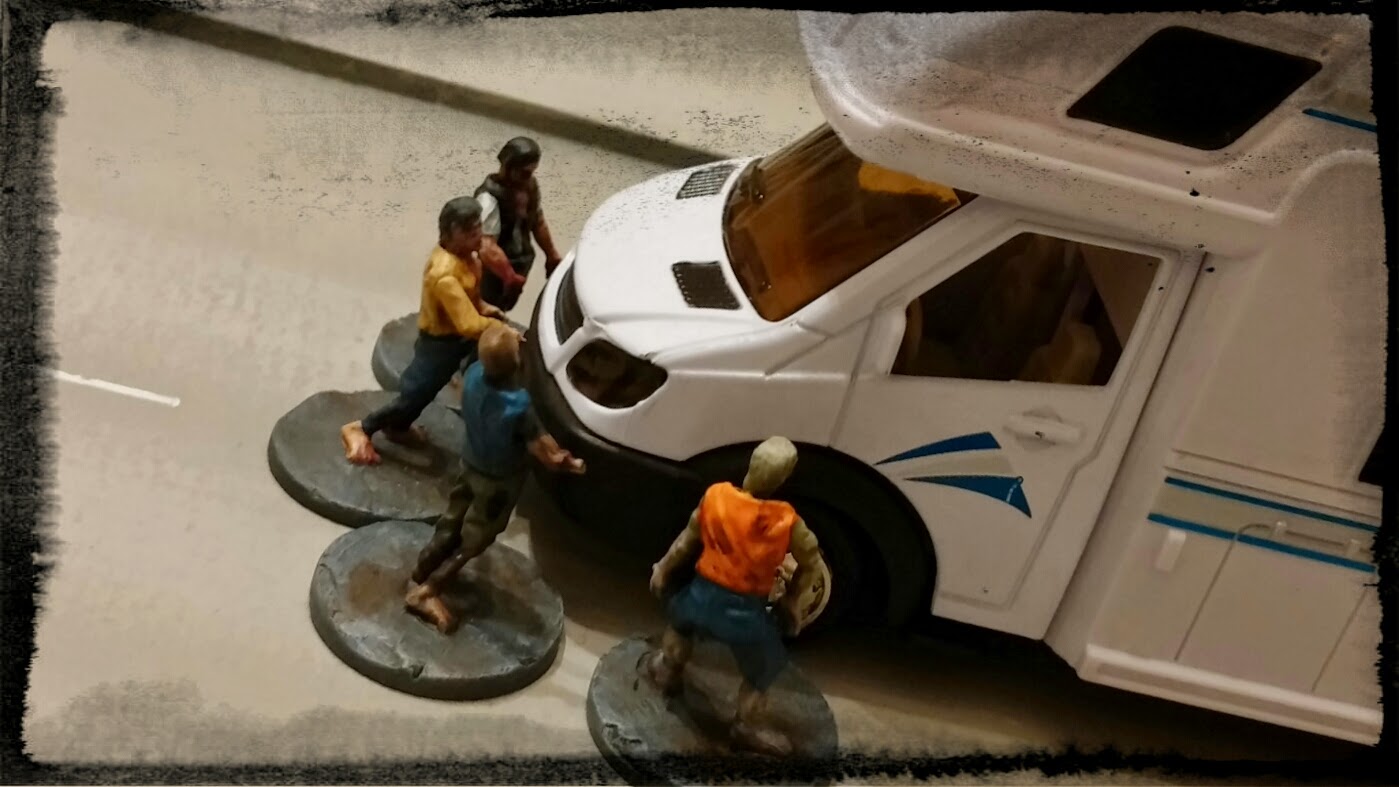 Lori turned the key in the ignition and was relieved to hear the engine turn over.  Deprived of the living to assault, the Zeds turned their attention to the RV and as it wasn't moving, they were able to assault it.  Meanwhile, Gus and Alec had been able to talk sense to Jenny.  Hearing the RV start up, they made a dash away from the nearest Zeds and hoped it wouldn't be long before they were picked up. 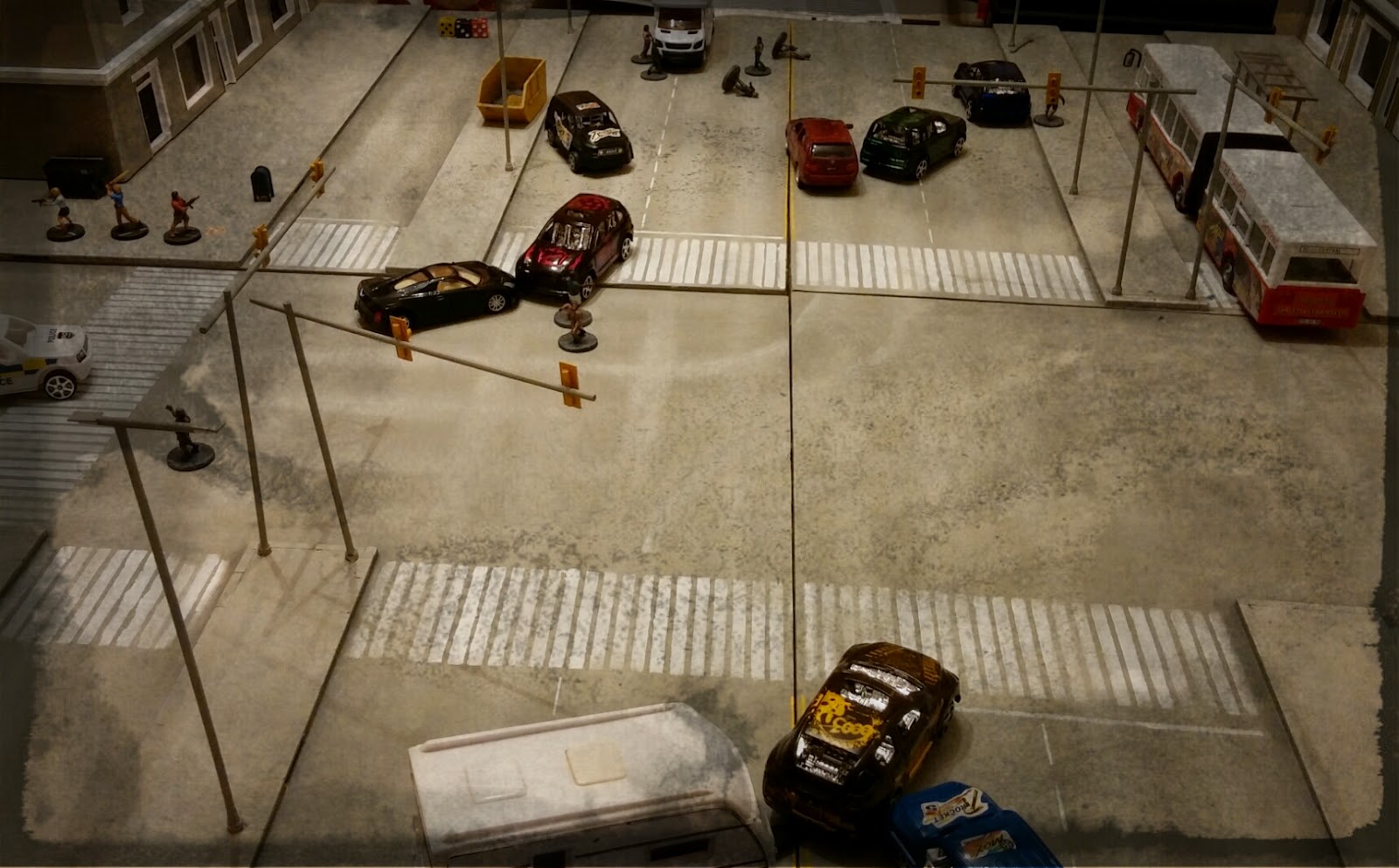 Unfortunately it was a long time, as Rick's gang seemed to roll hopelessly low activation scores.  Which meant a whole load more of these things kept appearing and walking around. 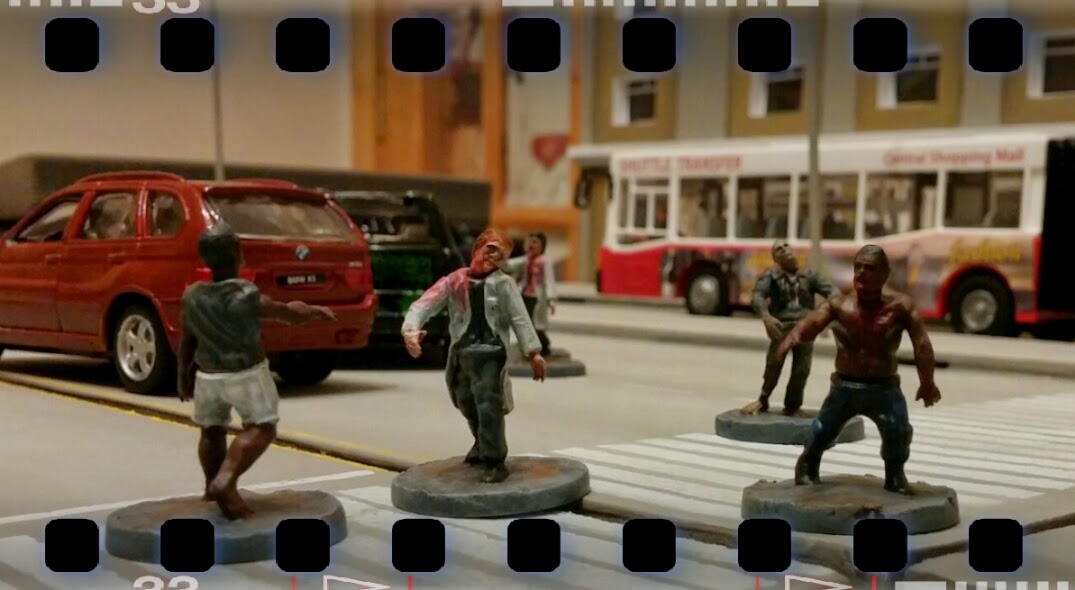 It wasn't looking good for any survivors at this point... 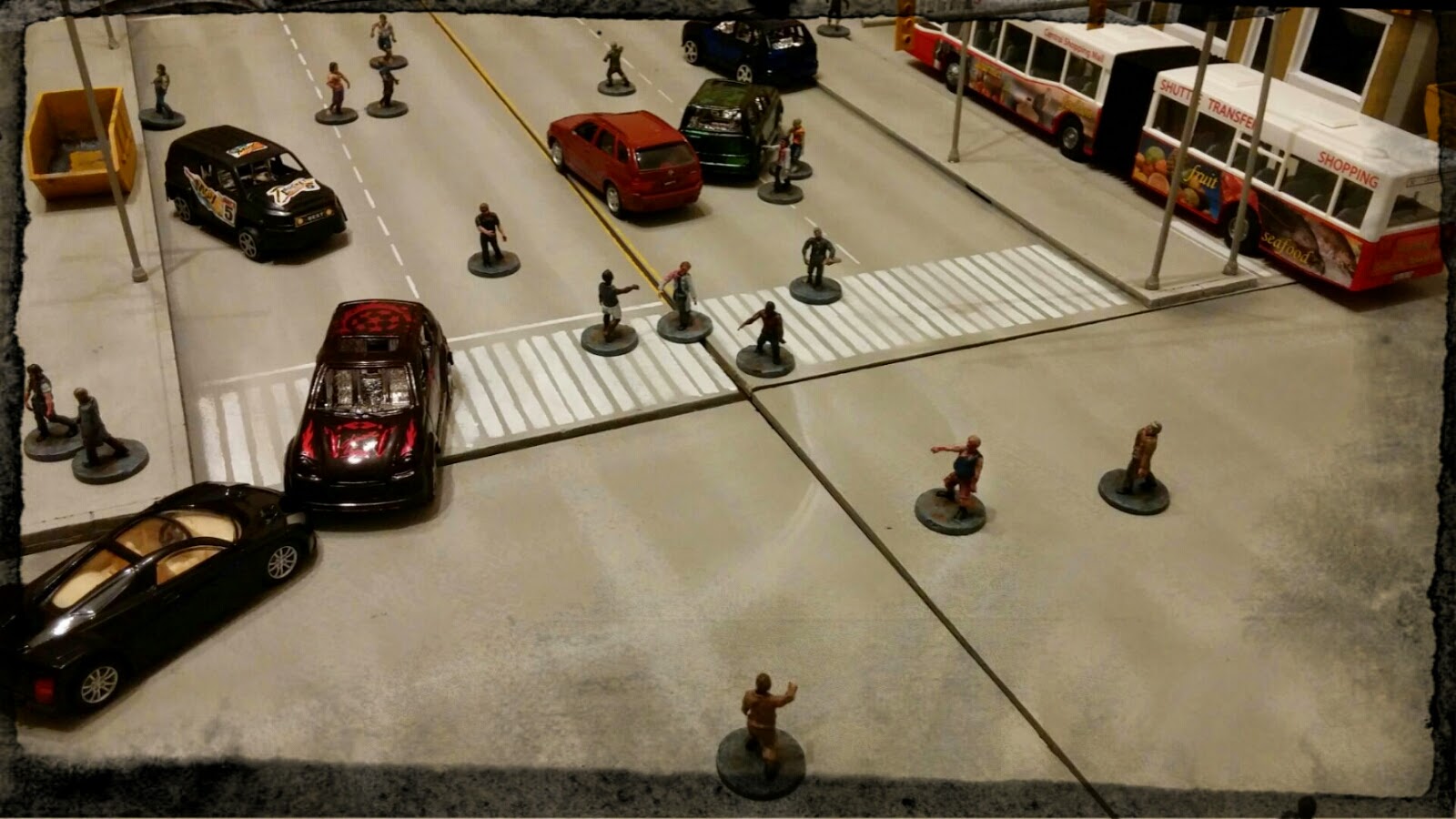 And while the battle of the RV raged on, and Gus found himself unable to draw a line of sight onto any of it thanks to that lumping great skip and the abandoned cars around them, it was about to get a whole lot worse.  Because Lori was attached and injured.  Rick pulled her away from the window before she too was chomped.  And with his foot planted firmly on the accelerator, the RV lurched off, weaving its way between the abandoned cars. 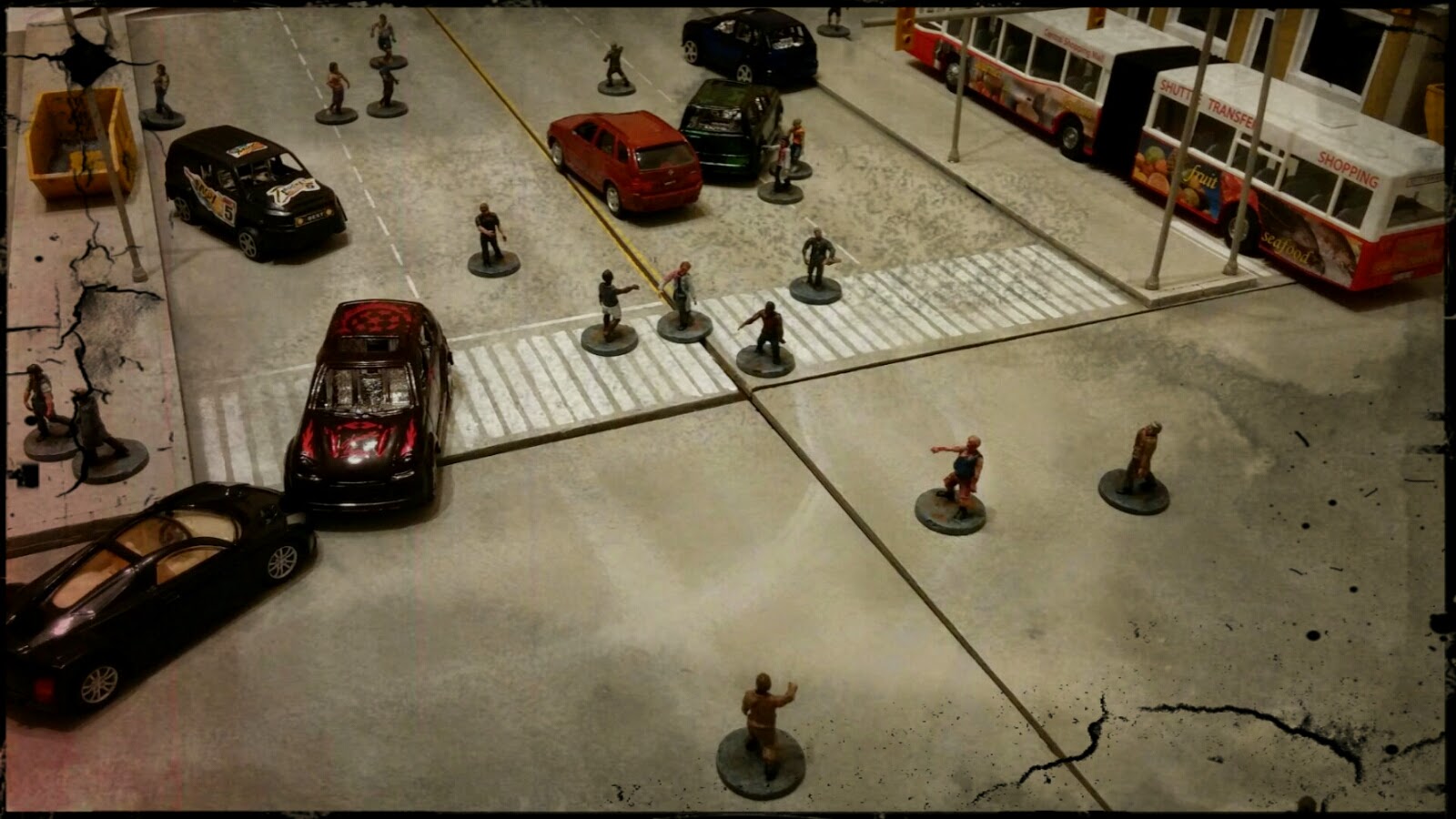 Of course, one thing an RV isn't is quiet.  And, yup, you guessed it, even more Zeds got in the way. 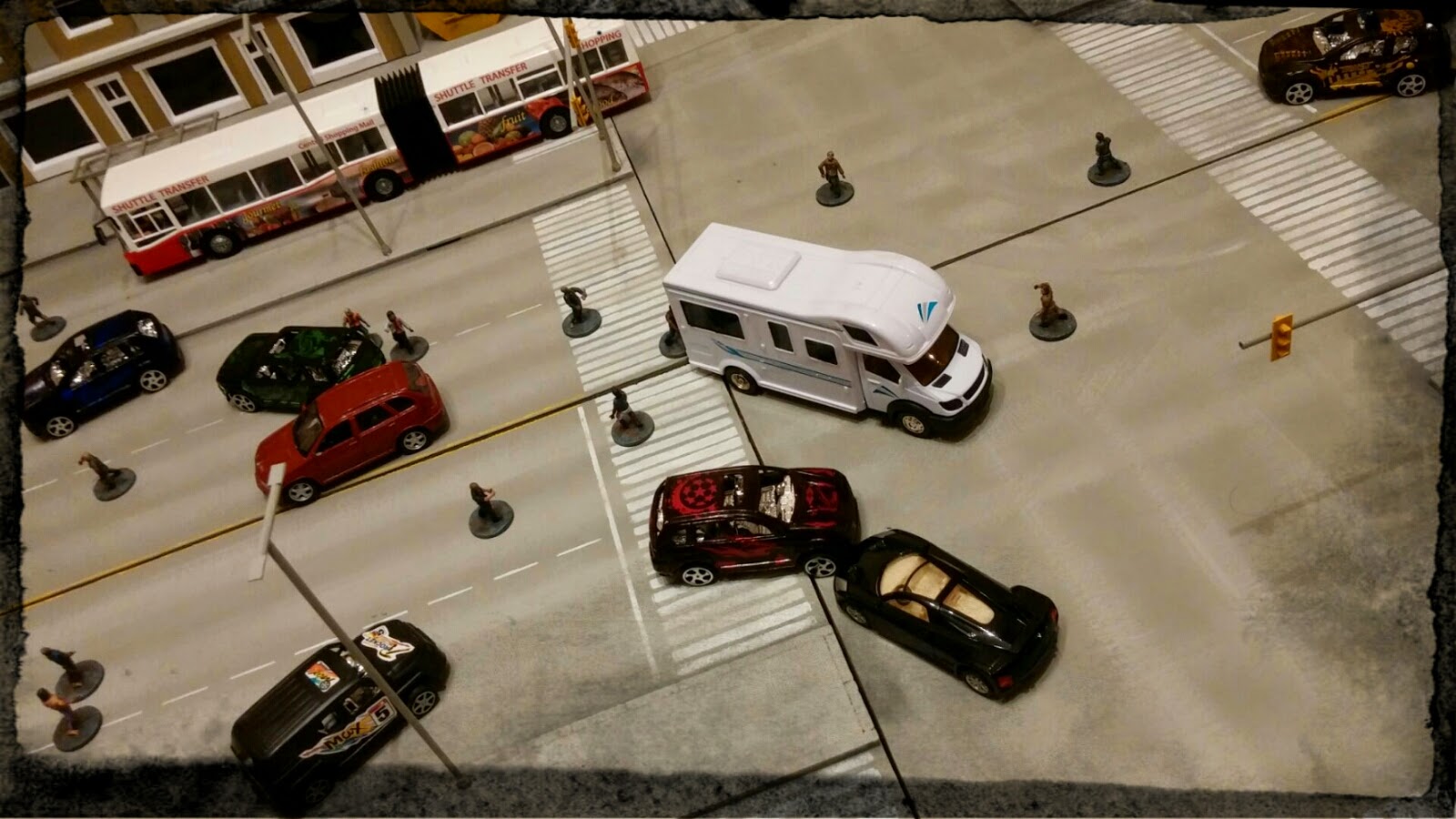 One was sent flying as Rick turned the corner, barely managing to keep control of the vehicle as it slewed around the corner.  He hit the break and Gus, Alec and Jenny clambered aboard before the Mystery Machine sped off into the distance, leaving behind it a horde of Zeds 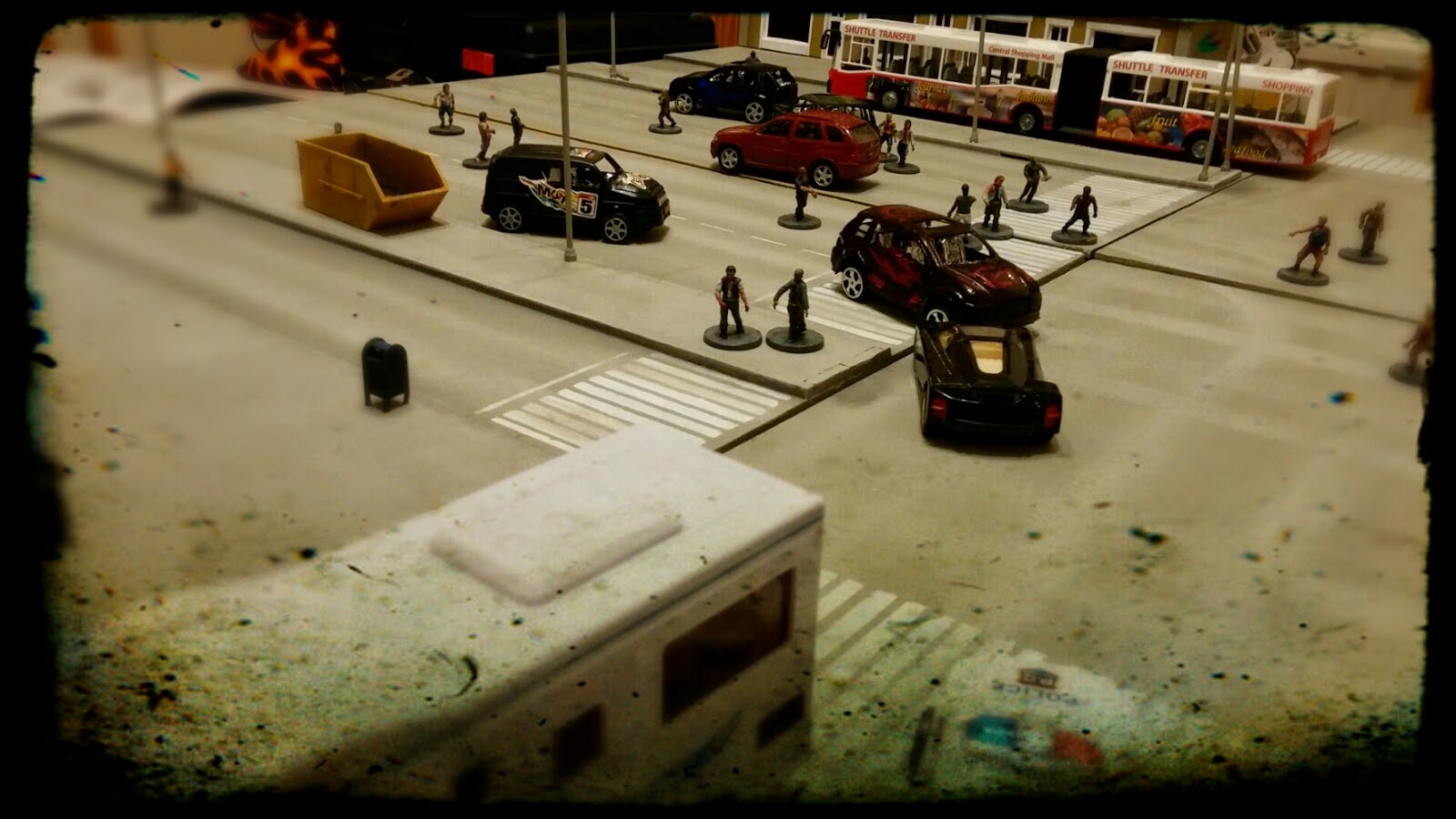 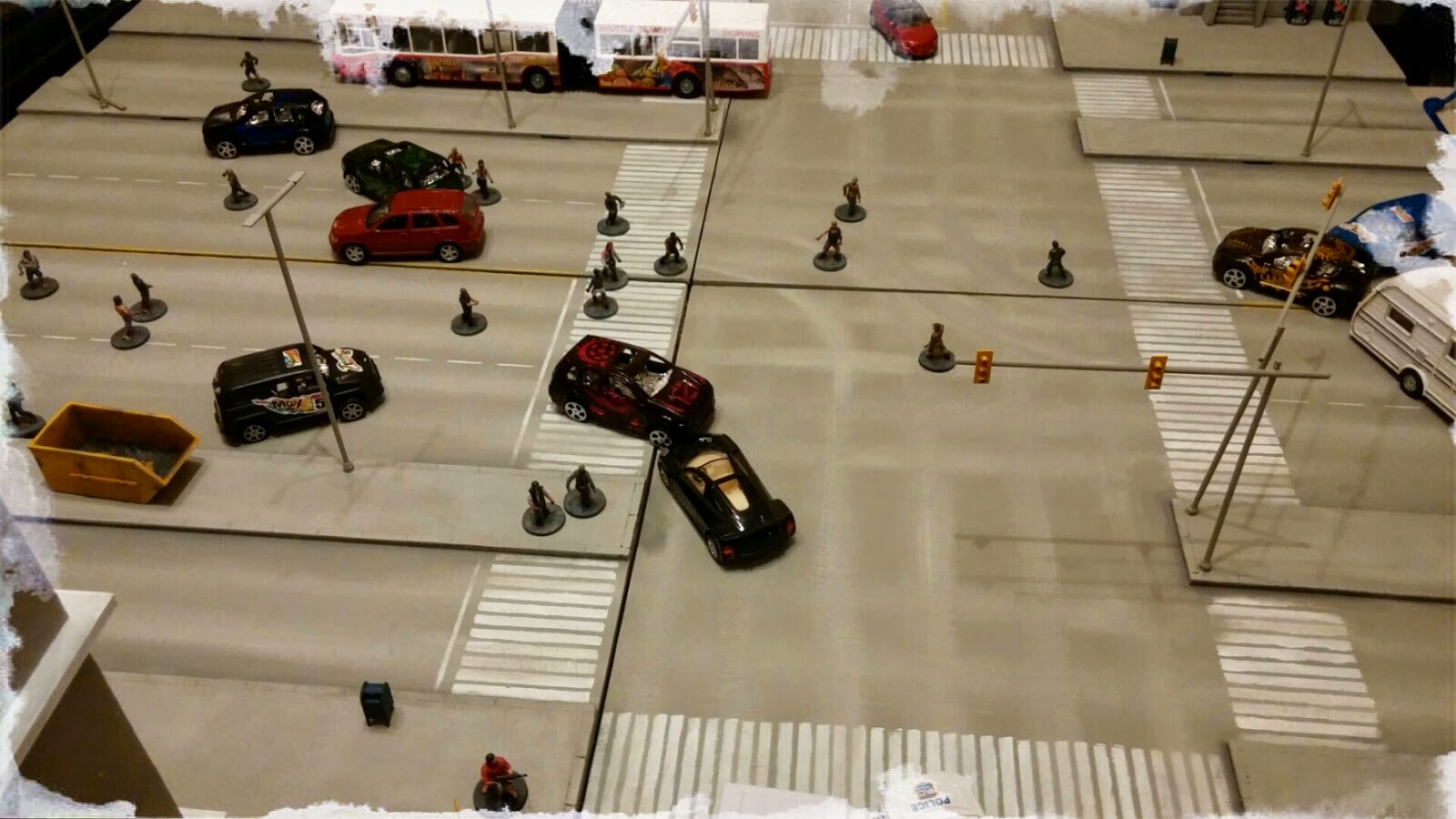 And unfortunately, Lori succumbed to her wounds and was dead by the time they reached safety.  Carl would live, but had suffered a -1 Rep. 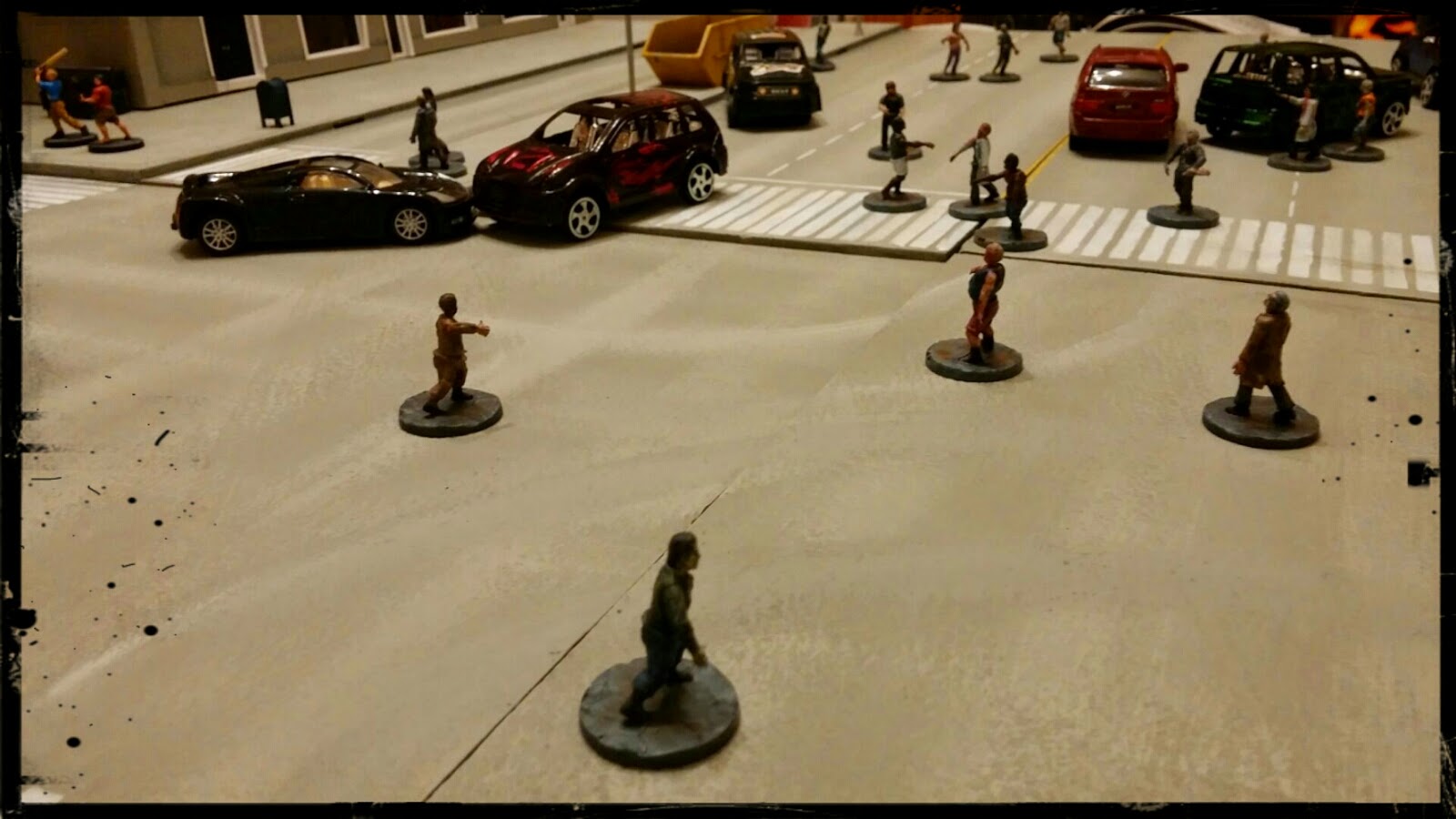 And once again Two Hour Wargames delivered an extremely tense, literally nailbiting game. (I'm down to the knuckles!)  There was no way to predict what would happen.  The Zombie placement had us penned in and surrounded on all sides the whole game.  The fact that the rules allow this to happen, and that the random activation roll at the start of each turn plays scant regard to the needs of the players, creates a game you cannot predict.  You simply have to respond to what is happening with the best of your abilities.  Each game creates its own narrative.   Brilliant.  Simply brilliant.  All Things Zombie is simply in a league of its own.

Can you guess I'm hooked?