The last excursion had been terrifying.  Baz was dead and Alec was taking it bad.  He seemed more jumpy and hadn't been sleeping properly since.  Jenny seemed to bounce back, but Gus was worried about her.  And truth be told, he kind of missed having Baz around to moan at when the pressure began to get to him.  Still, they had some more ammo, a spare chainsaw, and best of all, their own RV.
Gus and Rick decided they should stick together more.  The city was an even more dangerous place than they had initially feared.  Baz had always joked they were like the Scooby Gang.  So at Carl's suggestion, they decided to name the RV the Mystery Machine.

Supplies were at a low, and they decided they would have to try another part of town.  So in the afternoon of O+14 with very few Zombies around them, Gus turned the key in the ignition and sped off...

Bad choice.  Man, was this RV noisy.  Speed was the only thing keeping them safe.  Rick  and Daryl were sure they knew of some shops they might find some supplies in.  And thankfully they were downhill of their current location.  So with the RV pointing in the right direction, and the Zeds far behind, Gus switched off the engine and covered the break.  For a moment even Carl seemed impressed. Until the RV rolled to a premature stop.  They'd have to get across a very wide street... 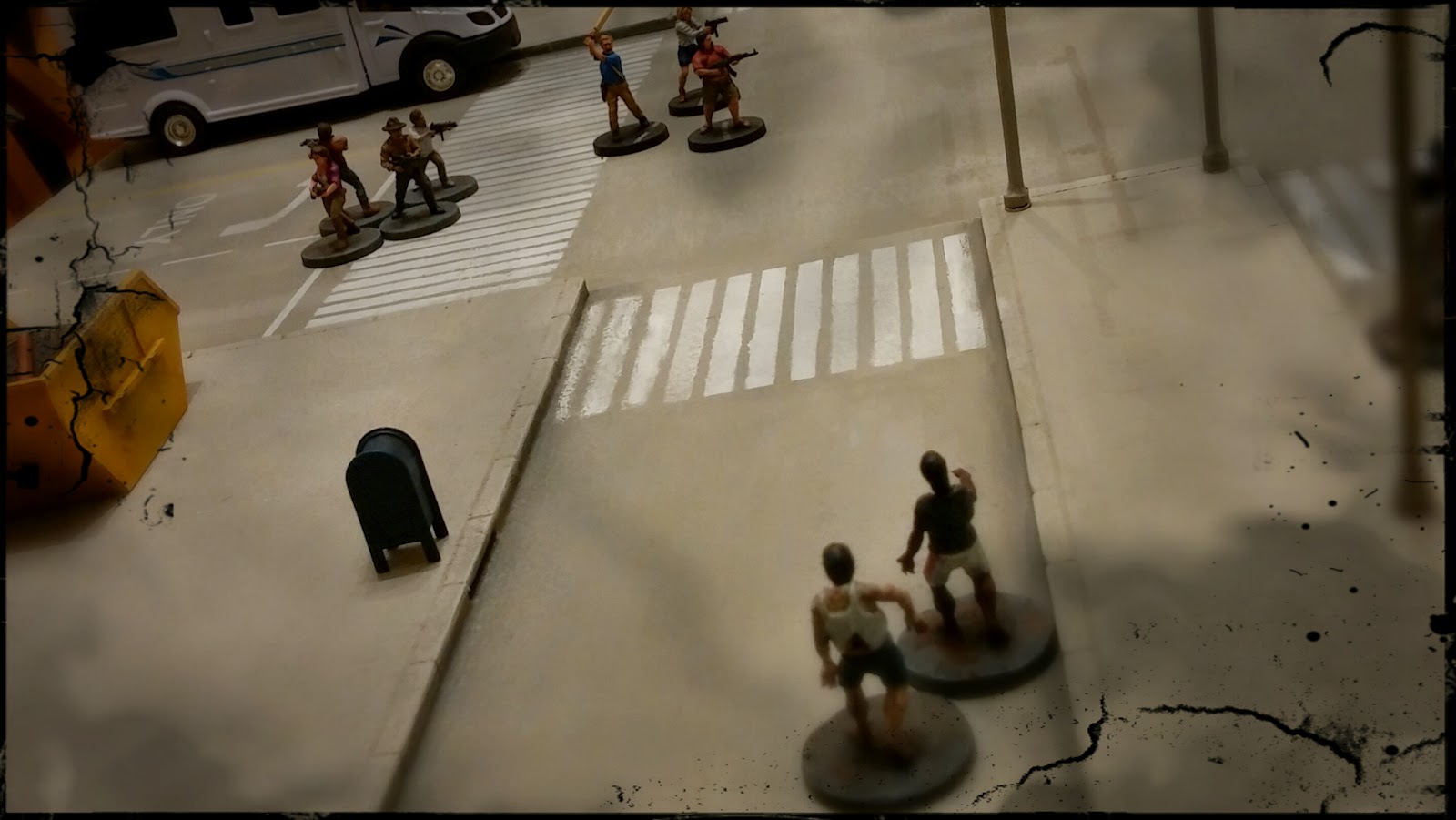 All hopes of a quiet journey on foot suddenly disintegrated after they left the safety of the RV.  With a ZAL of 6 and a D6 roll of 4, they were suddenly surrounded by ten Zeds. 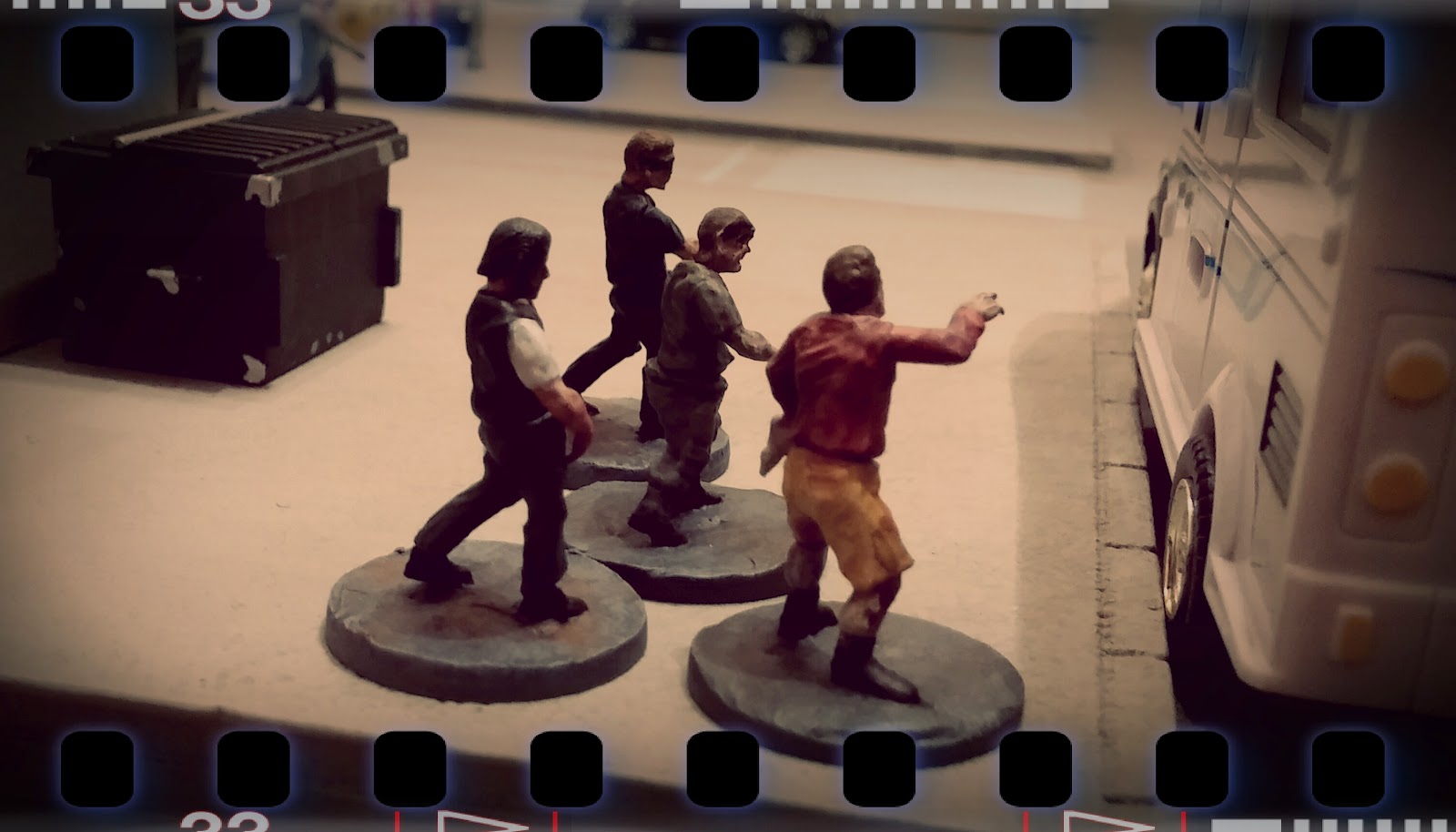 And as the activation rolls went against us, they got horribly close before Rick, Lori, Carl and Daryl were able to make a dash away from the scene.  Daryl fired his crossbow at the nearest Zed, but missed.  Gus, Alec and Jenny were unable to activate and suddenly they were surrounded by Zeds.  Jenny was surprised by two on her six.  She turned to face them but seemed to lose her bottle at the sight of their hideous appearance, and ran across the road, aiming at the building opposite.  Gus saw her run out the corner of his eye.  He fired his assault rifle, downing two Zeds, before turning to Alec, hollering on him to move it towards the target building.  He then turned and ran after Jenny, fearful of what might happen next. 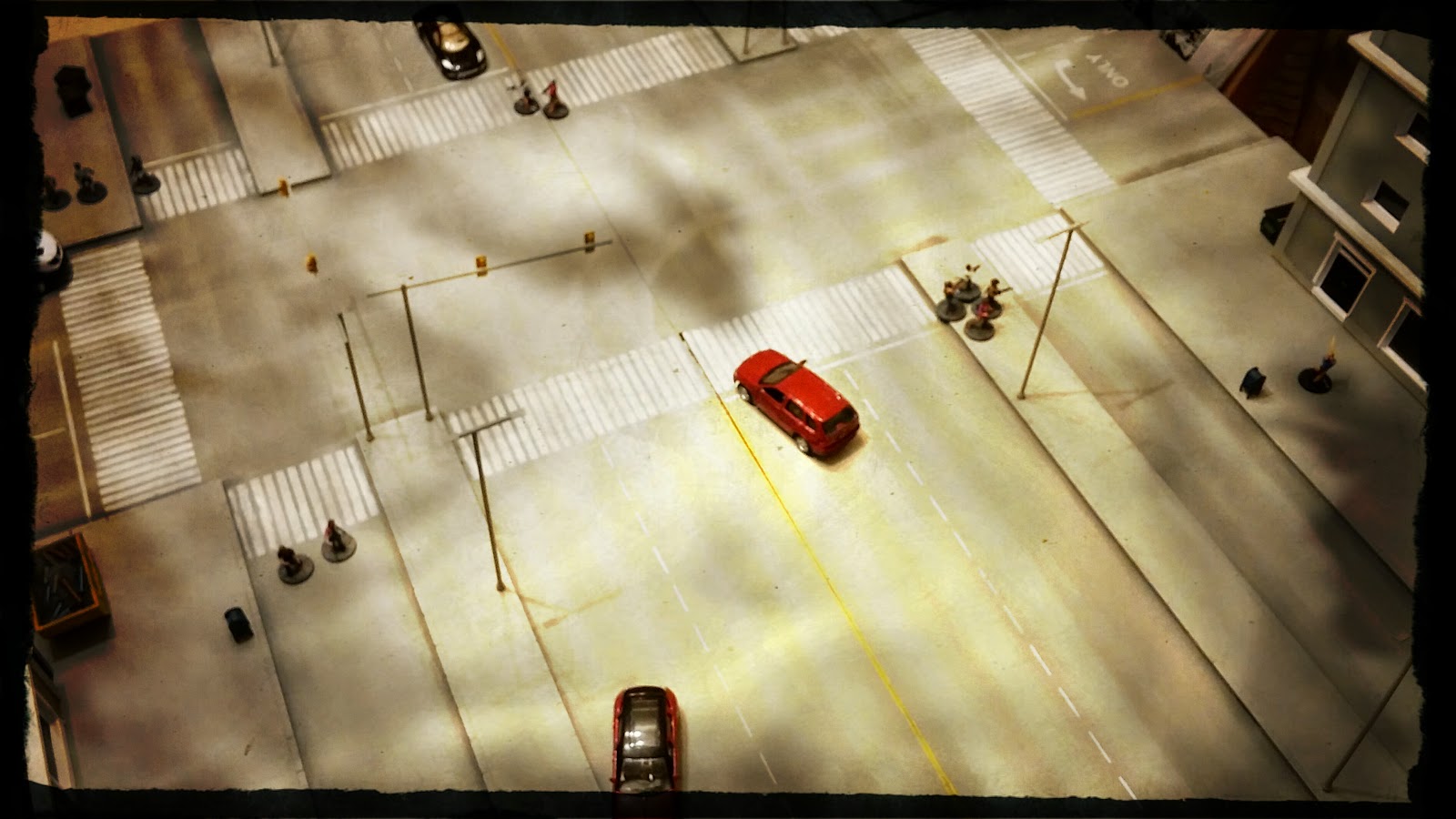 By now Alec was ahead of the others at the target building, but was unwilling to enter alone for fear of what may be inside.  He's on the left of the picture above.  Rick, Lori, Carl and Daryl are beside the streetlight to the right of the red 4x4, and Gus is trying to convince Jenny to come back with him to the RV where they can stay really quiet and safe while they get ready to collect the others.  Jenny was having very little of it at this point since there were three Zeds clearly walking about between them and their vehicle. 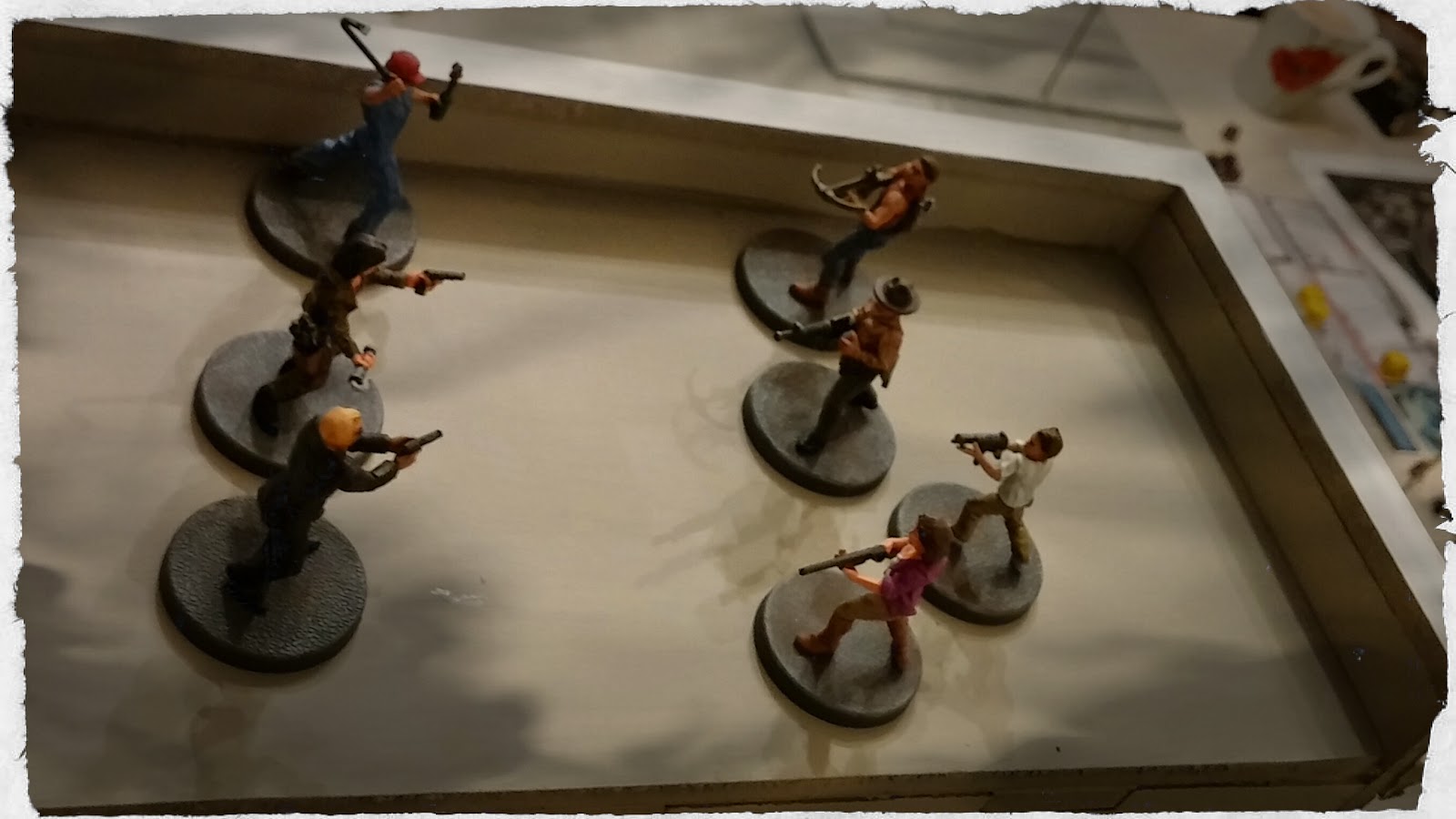 Conserving their ammo had meant the streets weren't as busy as they had been last time they had ventured in to the city.  This was definitely a good thing, as the Zeds seemed to keep activating while the survivors stood idly by, their jaws agape at the horrors all around them.  Rick and co managed to get into the building.  Alec was about as much use as a chocolate fire guard by now and was looking about frantically, muttering something about covering their escape route.

Inside the building, Rick, Lori, Carl and Daryl came across three survivors.  This was excellent as we had begin to fear the only things we'd ever find in the city this early on since the breakout would be Zeds.  They had noticed us coming and were hiding, ready to shoot if they were threatened.  One had a molotov cocktail and a crowbar, the other two had a pistol each.  With so little to defend themselves with, it was a wonder they were alive at all.  Rick told them they meant no harm, but these survivors were having none of it and they forced the intruders to leave at gunpoint.  No new team members, and no supplies.  They had to go next door.  Where they found two Zeds who they shot and popped.  A forage found some more ammo and food.  Medical supplies always come in handy, but not during this forage.

They exited to find themselves confronted with even more Zeds.  And as quickly as they dispatched them, more kept appearing.  Gus had been switching his gaze back and forth between his mirrors and the shop door Rick's gang had entered.  When he saw them come out shooting he decided it was time to start the RV and head to their aid. 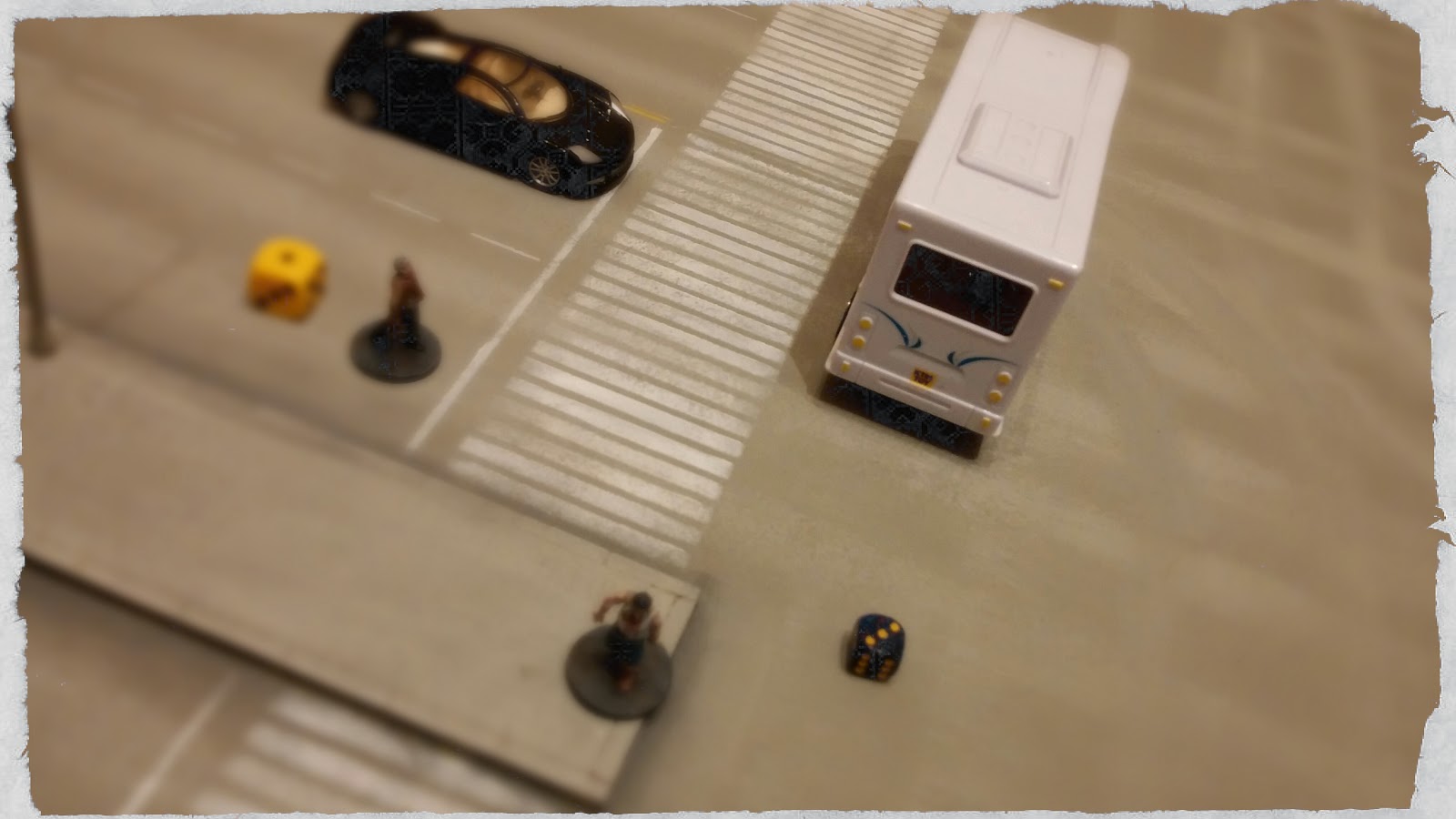 As all vehicles move in each activation rather than each turn, we decided to mark the starting point of each journey with a dice as you can see in the above photo.  Thankfully the dice were kind and not too many Zeds were attracted initially. 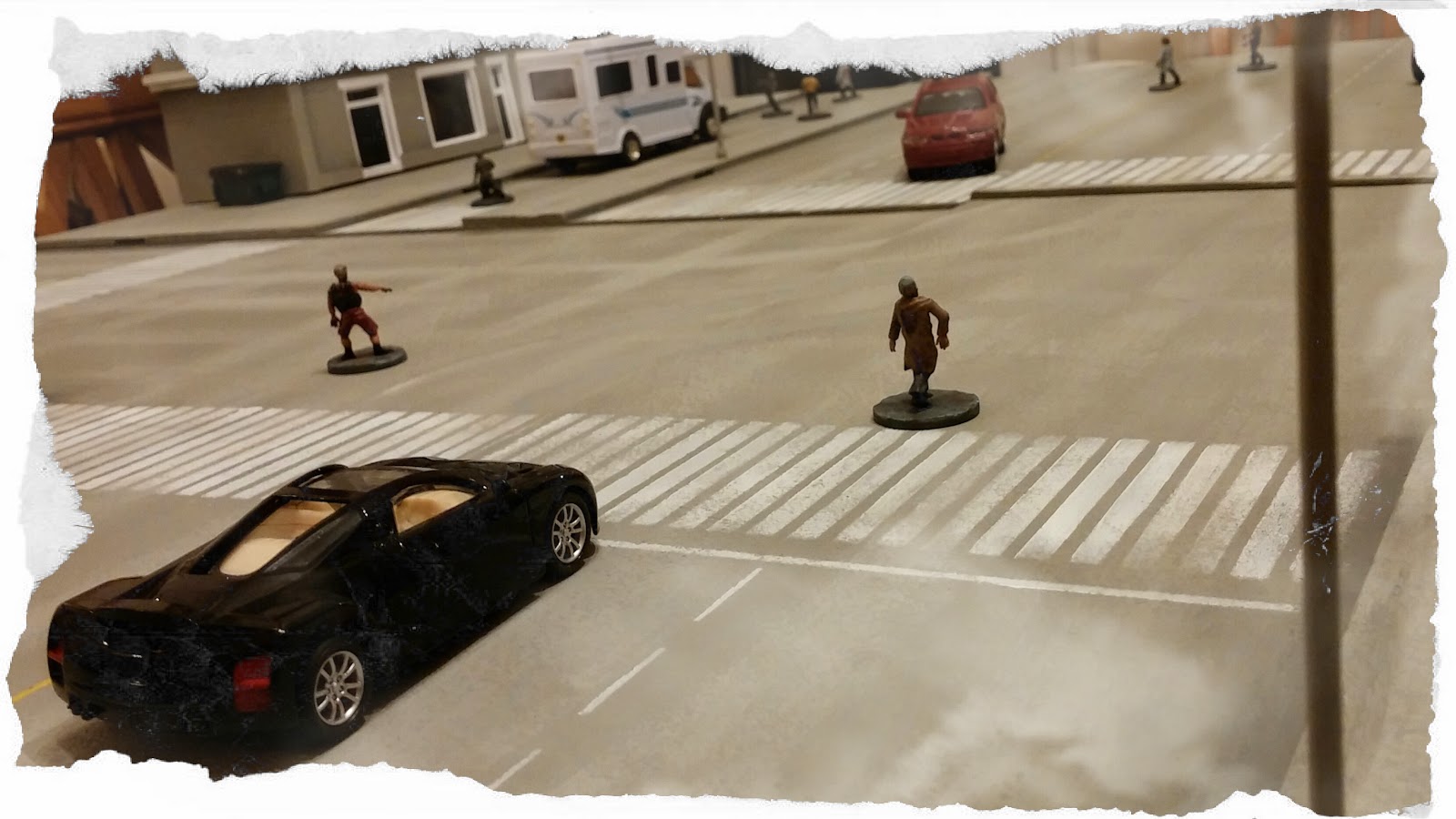 An RV can move up to 16" per activation.  However, if they attempt a turn at more than 1/4 speed the driver has to check he doesn't lose control.  So Gus might have sped off at 12", but he soon needed to slow down if he was going to make the necessary turn safely. 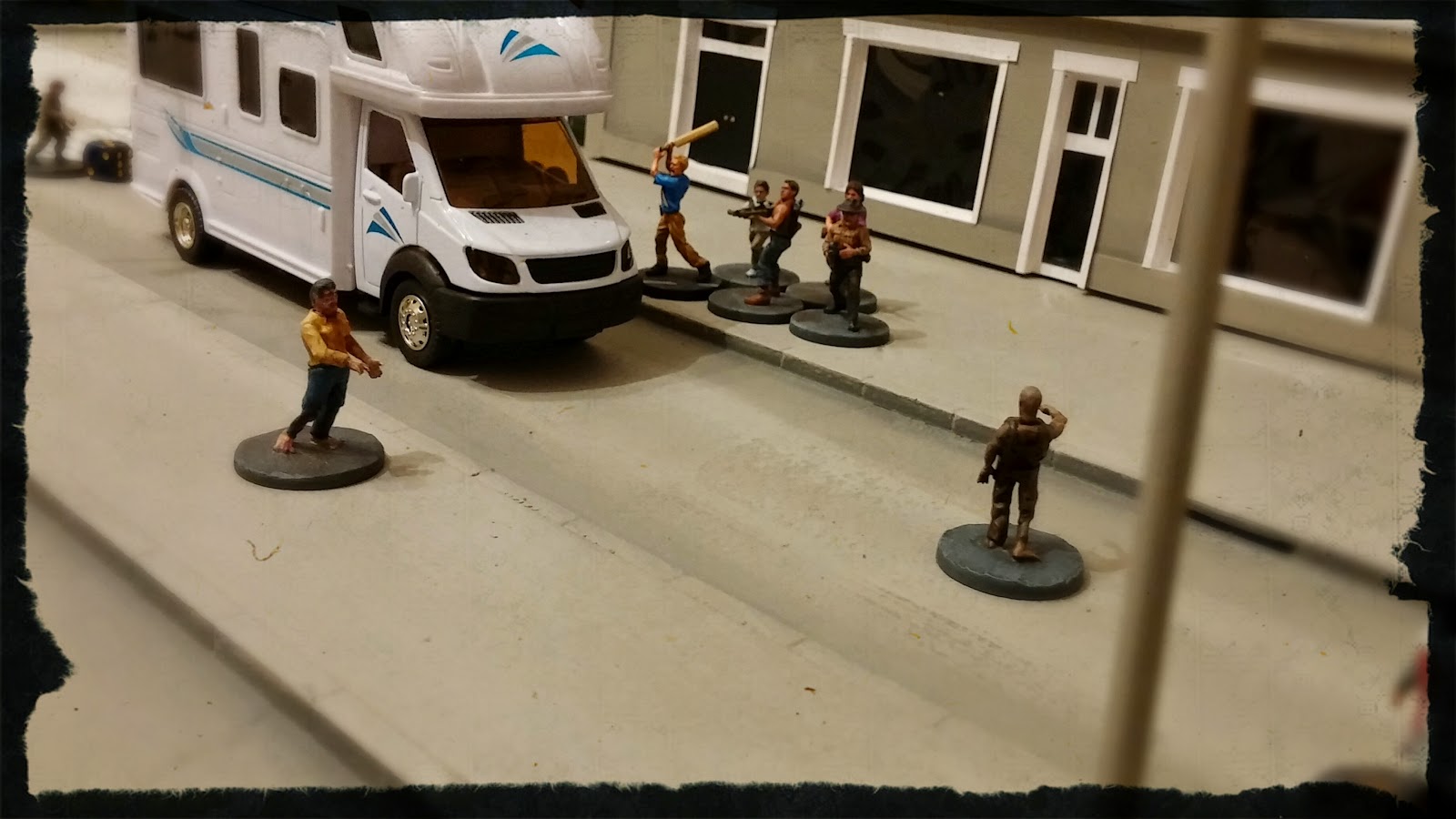 Rick, Lori, Carl and Daryl ran towards the RV as it screeched to a halt.  Alec joined the queue as they clambered aboard. 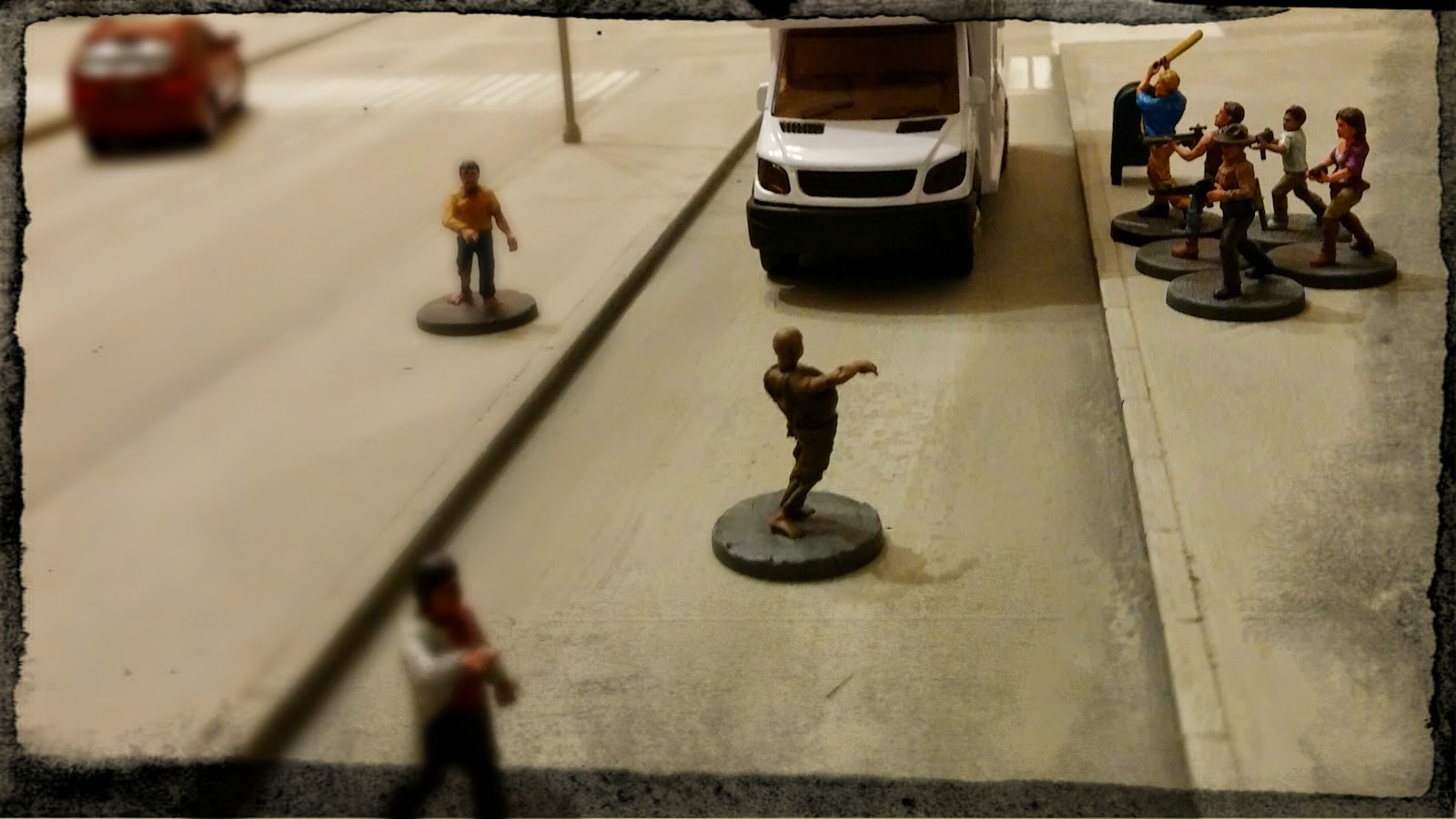 By now there were more and more Zeds appearing. 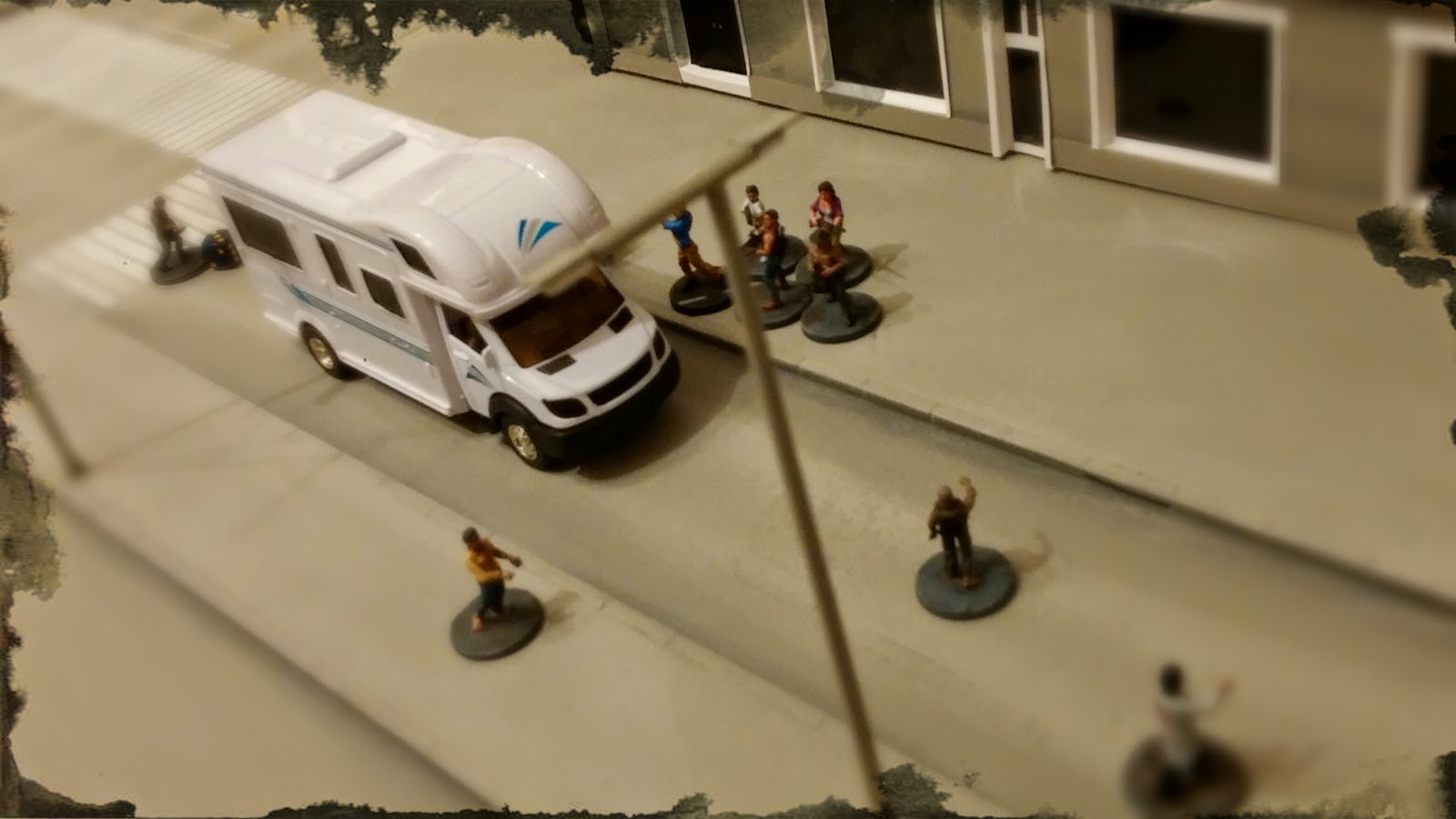 With everyone safely aboard, Gus pushed his foot through the floor and the RV shot off, taking out two Zombies, one flying to the left, the other to the right. 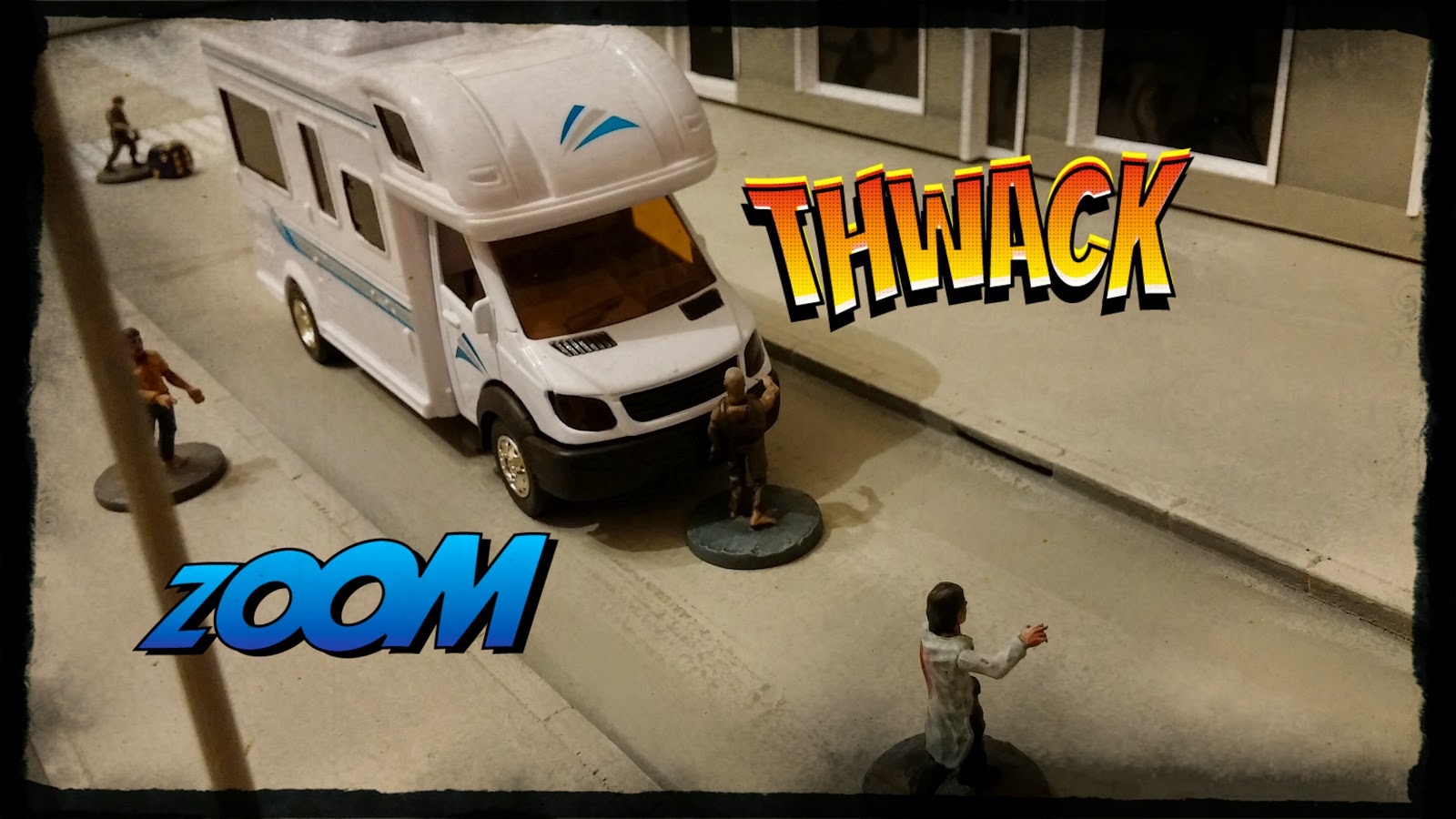 They had survived, leaving behind 15 Zombies.  I dread to think what might have happened if they had stuck around much longer... 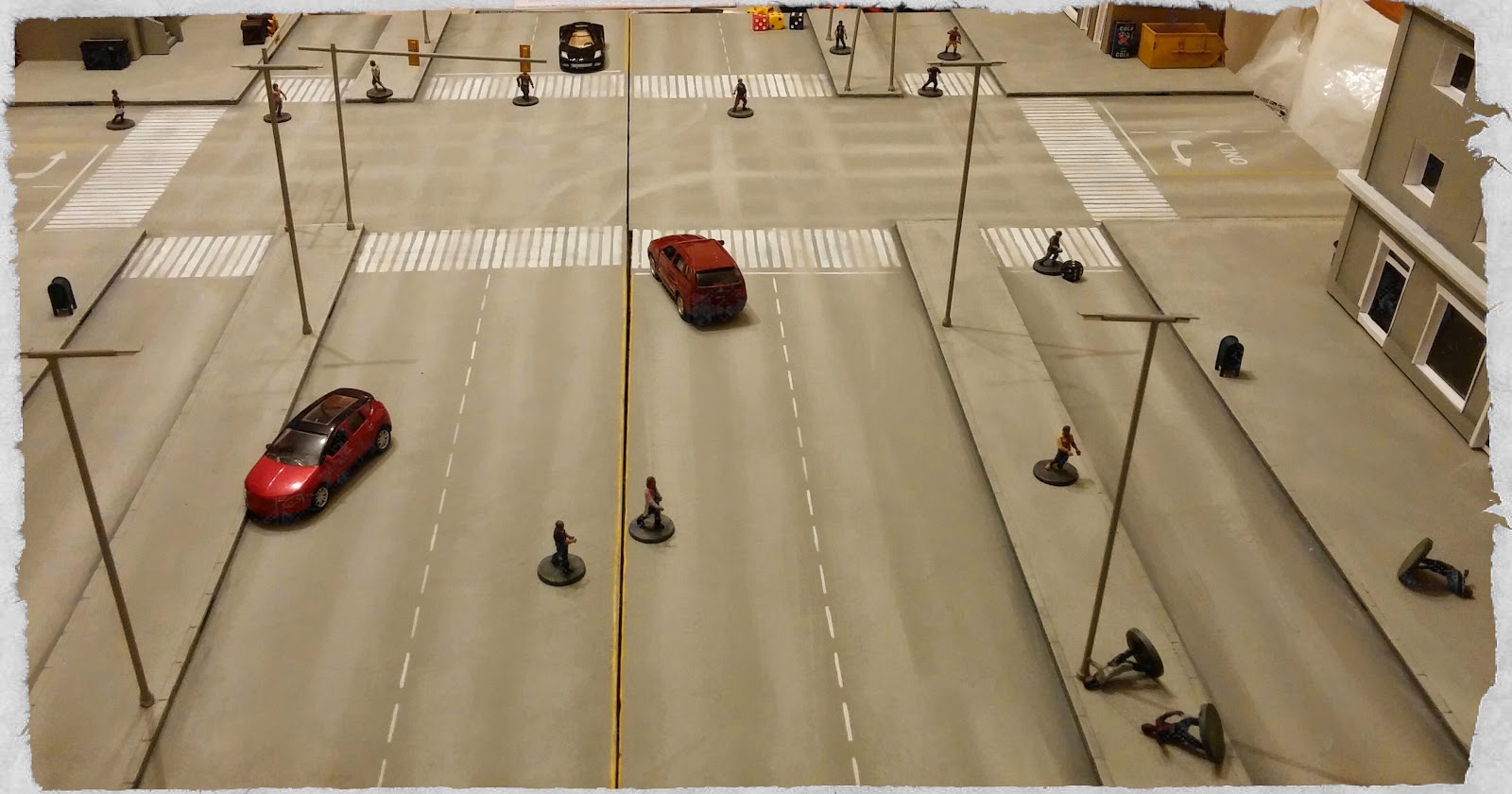 As a runaway, we needed to check out how Jenny was doing.  Passing only 1D6 on the Recovery Check, we discovered that Jenny was still with us, but her Rep was -1, taking her to Rep 2.  Alec had suffered a similar fate in the last game, returning with a Rep 3.  You may well be better off dead than Zed, but this surviving malarkey is harder than you'd think!