Return to the Town with No Name 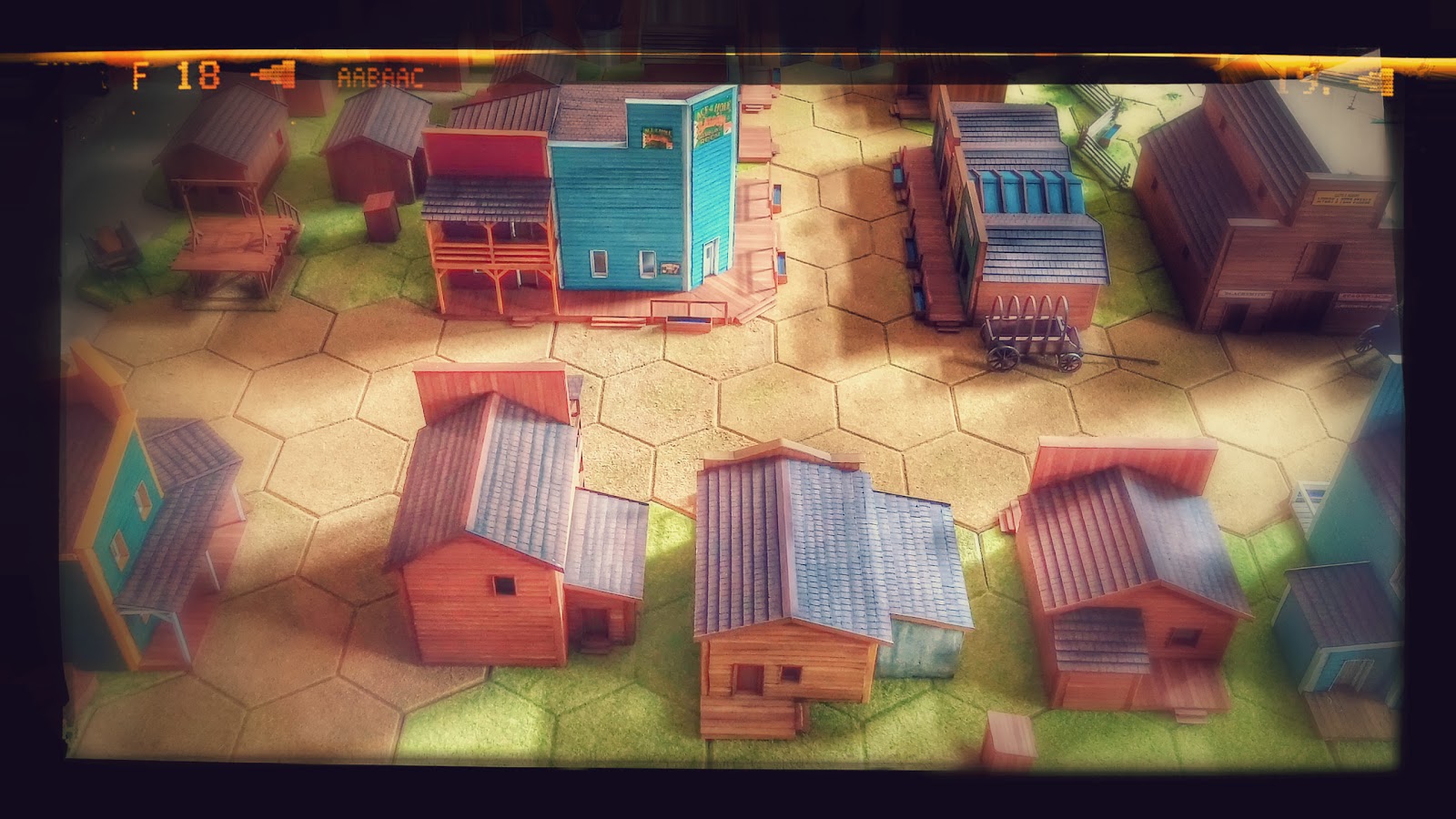 Last night saw a welcome return to The Town with No Name, and a second chance to play with the rules. I should lay the cards on the table at the beginning and warn you that this is not a BatRep by any means.  It’s more an opportunity to show a few pictures of our game and record where we are at with regards to record keeping.

Our game opened with my gang piling out the door of the bank having just emptied out the safe.  Unfortunately for my lot, those pesky double-dealing imitators of law abiding citizens happened to be out and about and looking to relieve me of my ill-gotten gains.  None of the characters were drunk, but one bandito began the game emerging from a Thunder Box after paying his debt to his Chilli Bean meal the previous night.  Even his favourite soiled dove was peering over the veranda to see where he  had run off to… 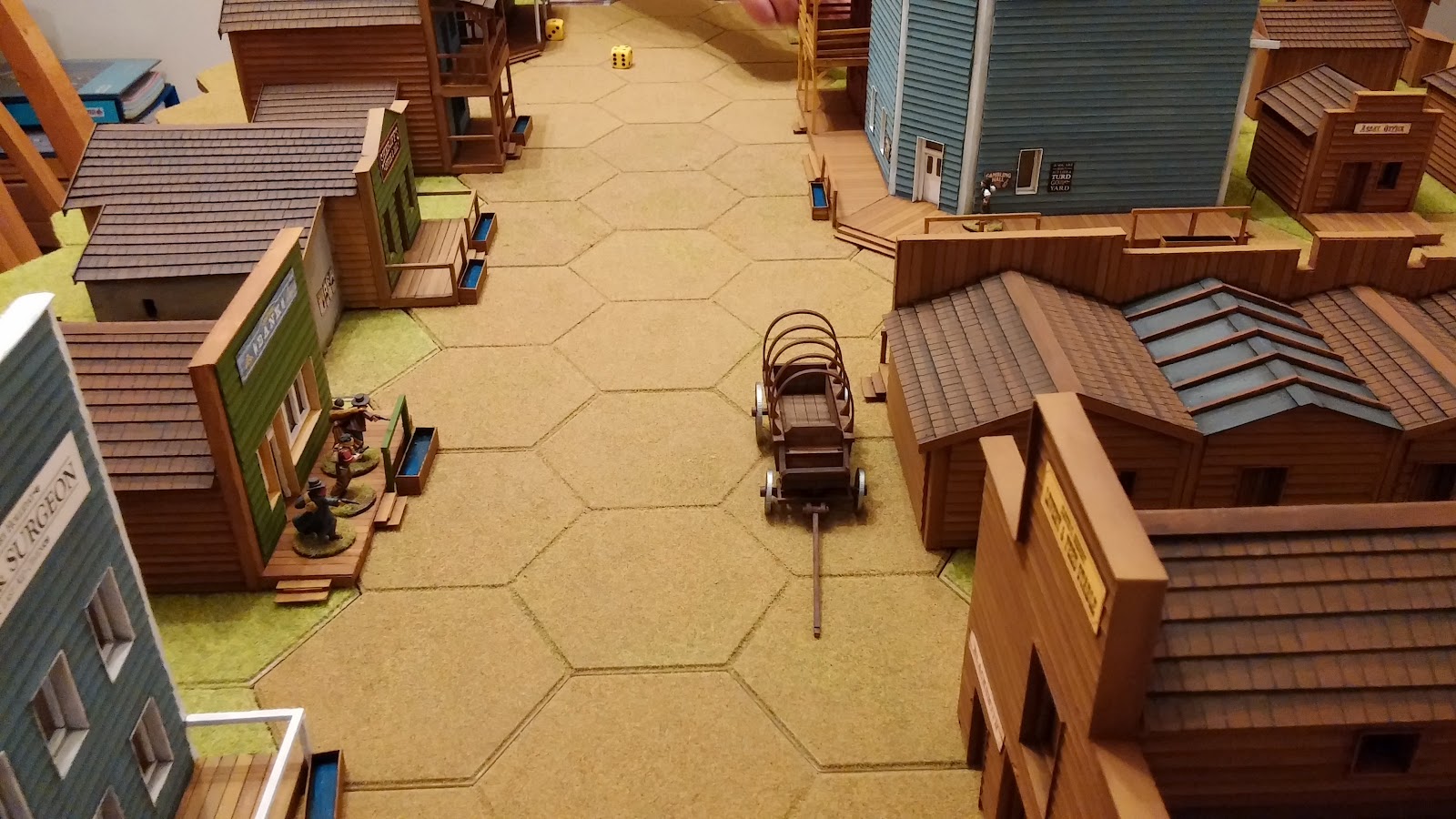 As you will be able to read in earlier posts, I decided from the onset to use card decks wherever possible to allow the game to randomly run itself rather than require a games master.  I was of the opinion that any advances, skills and so on could be recorded on the character cards themselves.  To this end the cards are all in protective sleeves and a non-permanent dry-wipe marker is on hand during our games.

But this is where the idea begins to fall short.  It’s rather difficult to note things down on a character card that hasn’t yet been drawn from the fate deck.  This, I assume, is why there is reference in the rules to having a notebook handy.

Of course, all this led us to try out the whole notion of counters in the game.  As we played, we noted down the kind of counters we would need.  This, you will understand, was not as easy as it might initially seem.  What do I mean?  Well, for example, when a character is knocked down, he has to spend an action getting up as well as recovering.  So, do you need a counter marked ‘Knocked Down’ which is removed by a Get up action, or do you put down a Get Up counter which is removed once the character has spent an action doing the same?

You can see a substituted No Move and Shoot counter in the following picture.  It applied to poor old Clint, who sustained a long shoot out with Billy the kid, finally falling to the ground unconscious with a serious wound to the belly.  Unable to move for the rest of the game, Clint rolled a 1 and ended up fearing Billy the Kid… 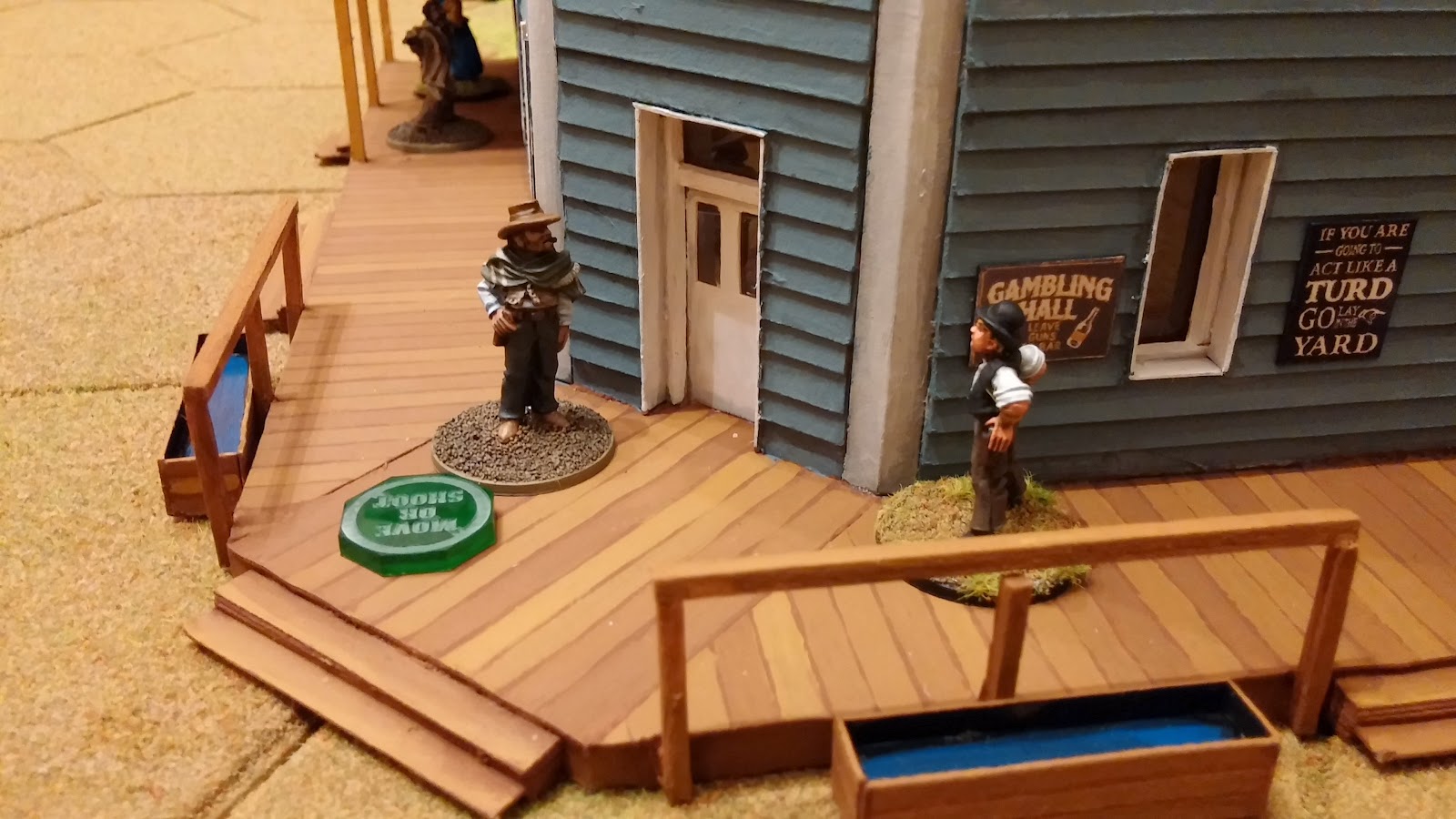 Of course, if you’re using counters to record wounds – graze, flesh, serious and so on, and figures can receive 2 or more of certain types before requiring a nerve test, then we pretty soon realised that the board was going to be covered in counters.

So we’ve come up with a solution…we think.  In addition to the character card in the Fate deck, I’m going to design some character cards that will lie beside the games table.  These will record skills, notes and injuries on them.  We can tuck an action card (Citizen, Gunman, Shootist & legend) underneath the edge of the relevant card so we remember which character has them.  And we can then use Knocked Down and Recover counters either on the table beside the miniature, or on their relevant card as well.

This, we contend, will be a good thing.  Because last night we used the challenge and fast draw rules for the first time. I have to say, they are absolutely excellent, and much blood was spilled.  With the exception of Il Buono though, it was all mine.  Billy the kid was the only one left standing, and he’d surrendered and been taken to the sheriff's to add insult to injury.  Those pesky varmint banditos were firing from the hip, rolling lots of 6’s and not a single 1.  Until it came to determining damage.  Then it was 1’s all the way.  Head hit after head hit, all with the result of ‘dead’.

And to see if this works any better, we’re going to have a game next week.  Because the best laid schemes of mice and men and all that…!
Labels: Brian Ansell Old West Wargaming Scenery The Rules with No Name The Town with No Name