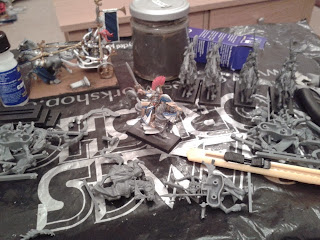 Ever felt you've bitten off more than you can chew?

I know the year has hardly begun, but I seem to be successfully managing this whole work-life balance thing so far.  Of course, being so bold as to say this right now probably sets me up for a fall, but anyhoo... I'm really enjoying gaming Hordes of the Things, and I've had a High Elf army on the back burner for this system for a while now.  In a bid to fight off what I call the Pandora's Box Paralysis, I decided to get to work on something. Pandora's Box Paralysis, for those who don't know, is the name I give to those times when you have hobby time, but can't decide which particular project to work on.  This normally occurs because, as a true hobbyist, you have at least five projects on the go at any one time, all of which appeal about the same amount.  Trouble is, deciding which one to actually work on means moving this from there and finding that thing you put somewhere else, and so, in true PBP style, you procrastinate and end up wasting your time.

Well not me this time! No siree!  I said "Blah" to Pandora's Box Paralysis, went to the loft, found the miniatures I needed, added them to the other miniatures gathering dust in my bedroom, looked out my paints and my paint station and took stock.  Then, still fighting the urge to pack up and read yet another rule system we haven't even agreed to game yet, I set to work making the models.  The result can be seen below. 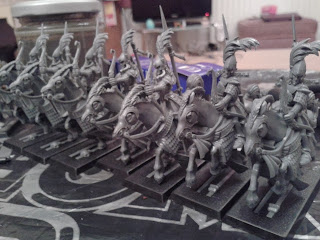 And then it all became rather daunting!  You see, for more years than I care to admit, I've always insisted on painting one miniature at a time.  This, I used to convince myself, was the True Way to Paint.  And I was very much happy in my ignorance, normally because I was either playing skirmish systems which allowed such a lazy approach to painting, or because I had started painting figures for games that were a long time from being played.

And then reality hit.  Big time.  I have heaps of figures that simply are never going to get painted if I spend all my time painting only one at a time.  And perhaps the reason I've never gotten round to making, let alone painting (don't even mention gaming!) is the sheer volume of figures to be completed.  I can't wait to play a game of Sharpe Practice, but getting nigh on 200 figures painted is really daunting.  Especially if you're approaching it from a one at a time method.  And I'm only dealing with seven and a bit horsemen! 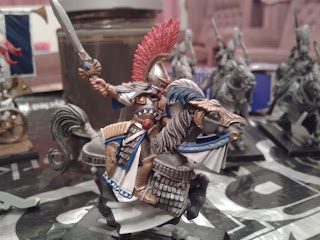 That's my High Elf General.  Painted most of him two years ago.  And have only just come back to him with this painting project.  There are still some bits to finish.  But i'm going to have to batch paint his seven colleagues if there's any hope of getting this army on the table.  Daunting but necessary.  After all, what's the point of having the figures if you don't paint them and get them on the gaming table? 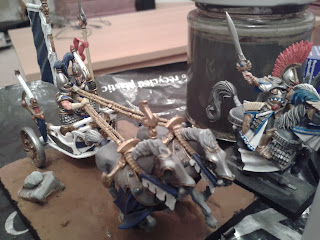 On the plus side though, I did focus enough to complete the High Elf chariot you can see pictured above.  Btw, this is a brilliant purchase for a HotT army.  I've used the horses for the chariot, allowing me to make two lions, each of which is on its own base.  This gives me two Beasts for my army list. 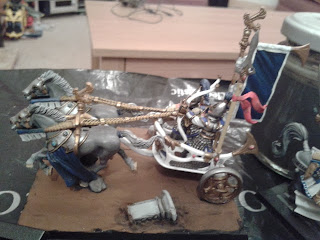 So, with much painting ahead of me, I'd better stop letting PBP distract me with this blog and get on with painting the rest of the army.  I'm hoping they might even be painted inside three weeks.  Now there's a challenge!

Dread to think how long they might take in the real world!