I've recently had opportunity, through the generosity of a good friend and fellow wargamer, to have a look at some of the lovely shiny newness from both Games Workshop and Forgeworld.  I've also revisted 40K and had opportunity to ponder over this troubled beast that we call 6th Ed. 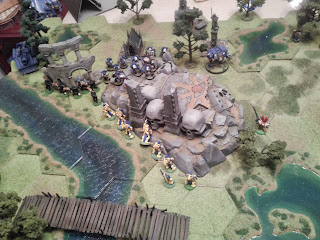 I've also had the delight of playing a few games of Hordes of the Things, and the opportunity to play a trial game of Songs of Blades and Heroes.  And I've spent almost a whole year planning and making scenery for The Rules with No Name, began designing the scenery for All Things Zombie, and been delightfully sidetracked by the excellent Bolt Action rules and a platoon of Commandos.  It's been a fantastic year of gaming and planning, to be honest! 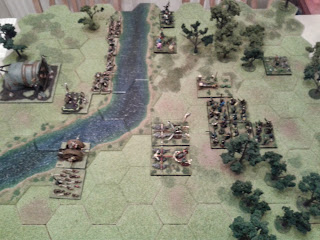 Its also been a year of thinking about what it is that makes this hobby of mine such an enjoyable and welcome part of life.

And this is where the world of GW begins to sour things.  I grew into this hobby through Games Workshop.  I love the quality of their miniatures, and what has been until recently an enjoyable if slightly predictable game system.  Take a look at the following picture if you're in any doubt as to what I'm talking about.  And yes, that's the ubiquitous 2+ I'm rolling. Yup, 2/5 of them are 1's.  Who'd have thunk? (And that wasn't a staged roll.  That's how good my dice are.) 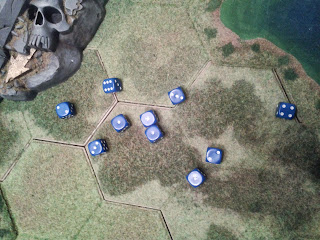 I think the common parlance for 6th Ed 40K is "broken."  A minor understatement in my humble opinion.  The splurge of specific themed army rules in the new Space Marines codex is, frankly, alarming.  Now I hear people saying they want a certain chapter because of the specific rules it has.

It's become a field day for beardies.

Let's be honest, the old 90's Thorpianesque views have reached new heights.  Take this army because it'll pound that one.  You need this unit because nothing can defeat them.  My unit's better than your's.  It's like a primary playground out there, folks!  Its now reached the point that everything has to be completely broken to keep up.

And I have a real problem with that, because I can't help feeling that I'm after something which GW can no longer offer its players.

I got into wargaming because I simply love the spectacle of a games table covered in model scenery and filled with exquisitely crafted and lovingly hand-painted miniatures.  Sure, we can't all paint to Golden Daemon standards, but its clear to see if we've put in the effort. The game system is important (why spend 11 months on more than 20 buildings if it's not?!?!?!?!?).  But for me, its the company of good friends, the drinks and munchies and the gentlemanly sportsmanship that make wargaming special in my mind.  It's not about broken armies that are guaranteed to win.  If winning is the only thing that matters, then wargaming is reduced to beating the very system you're paying good cash for.  That's beardy. Playing is fun.  Winning is a bonus.  Victory is only meaningful if its done with grace and good will.  It's supposed to be a game after all! If its only about winning, seeking loopholes in a system, and playing to flatten an opponent by rules rather than good generalship and gentlemanly conduct, then I'm not interested.  People that act in that way had only one name when I was young.  We all knew it, and we didn't put up with it.  It was the only name that fitted.  Bullies.

I'm concerned about the direction GW are moving in.  Don't get me wrong.  The minis are fantastic.  The production values are lavish. But I actually get more fun out of a printed pdf download in black and white.  When did wargaming become nothing more than trying to work out a winning combination that will guarantee a win?  That's surely not what this hobby is about?

Let me give you an example to explain where I'm coming from. Burgundian Ordonnance.  A wargamer's favourite late medieval army. Let's be honest.  It had everything.  The latest innovations in army composition.  It had handgunners, Longbowmen from England, Pike.  Crossbowmen with pavisse.  Knights in full plate armour.  And artillery.  A dream army to collect, paint and field.  But did they win a single battle in the real world? Nope.  They were trashed.  Repeatedly. 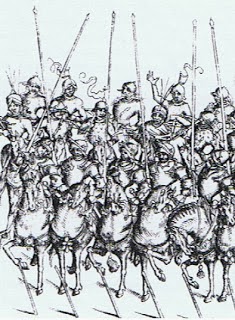 Is it any different on the games table? no.  I'm not saying you can't win with them.  You can, if you're a very canny general.  But don't expect it outside of a very blue moon.  So why are they so popular, and why do I want to build such an army?

Because it looks awesome.  And it'll put a wry smile on the face of your opponent as you start taking it out of the box and onto the games table.  You know as you do so that you'll probably lose.  Your opponent will also recognise this.  But it doesn't matter.  Why?  Because the fun is in the game.  And if you do manage to win with them, you'll have earned the admiration of your friends, and much respect for your generalship. This is what I think wargaming should be about, anyway. That's why I wargame.  It's in the second part of the name.

It should never be about wins and losses. It should be about the friendship and the fun. As we get older, we seem to equate a good game only if we can win.  Heck, the games console world is based around this concept.  But as a child, we learned to enjoy playing.  Growing up isn't all good, you know. It's not winning that's important.  It's the playing.
Labels: Burgundian Ordonnance Games Workshop Hordes of the Things The Rules with No Name Two Hour Wargames Wargaming Warhammer 40K