46 Poxwalkers on a Madman's Paint Station!

Okay, so here's something of a crazy notion I took recently.  I'd already painted sixteen Poxwalkers.  And I'd a enjoyed the process as well.  The first model was painted on it's own to help me figure out how I would approach them.  And thereafter I pained them in twos or threes.  It wasn't long until I had worked out a method of painting them in stages. But then the dreaded Rona virus appeared, and my painting wandered for a while across different miniatures.
Now that was fun, but it wasn't getting anything in particular done quickly.  So I decided it was important to focus on one army at a time and make sure I painted everything I had for it.  Then I could move on and work on another army.  And I have to say, it's been working very well indeed.
But those Poxwalkers were worrying me.  How should I divide 46 up into batches?  Two lots of 23?  Unsure how much motivation I'd have for such a production line, I decided to consult my painting notes and see how I'd painted them.  And because they have so many wash layers, a thought began to dawn on me.  I'd be just as well to do the whole lot.  If nothing else, it gave more time between each stage.  And that would give the man, many washes I was going to use even more time to dry out before the next one began.
So I set about assembling the lot.
And with that done, I extended the size of my paint station by using a small table.  This effectively gave me two wings on the side of my paint station.  The models would move from one side to the other to dry while I worked on the next one.  In this way, I could keep a track of what I was doing. 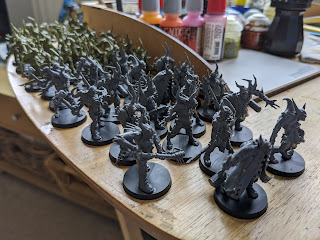 Here they all in eager anticipation, sporting original sprue colours.  The green ones came with the Conquest partwork.  The grey were others I had purchased. 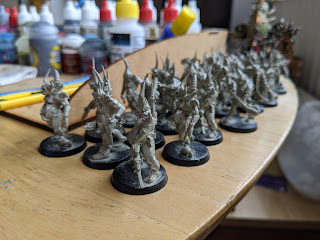 The pictures above and below this text shows you the process at work.  On the right side of the table the Poxwalkers are slowly drying with their undercoat of VMC 70884 Stone Grey applied.  The ones on the left of the table (picture below) are waiting patiently to receive the undercoat. 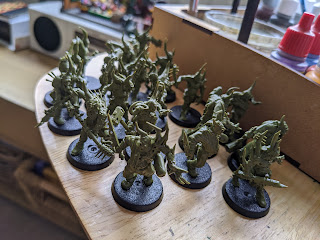 I've got to be honest, I've never used this colour for an undercoat before.  Felt kinda weird not using my usual black.  But as most of these models are at least naked to the waist, I couldn't see the point of undercoating them black and then having to apply the stone grey afterwards.  It was important to get good coverage of the Stone Grey as this was going to be tinted by the different layers of wash I was intending to apply.
Next job was to apply VGC Squid Pink to all the tentacles.  Again, an even and solid colour was really important. And by this point, the models were getting used to bouncing from one side of the table to the other. 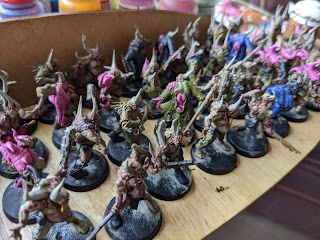 Flesh areas were given a coat of Army Painter Flesh Wash.  When this was dry, I applied Citadel Athonian Cammoshade wash to targeted areas on some of the models.  Those that didn't were then given a targeted wash of Army Painter Red Tone Wash.  This was also applied to any tentacles. 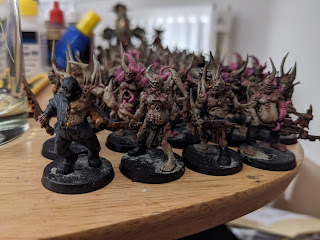 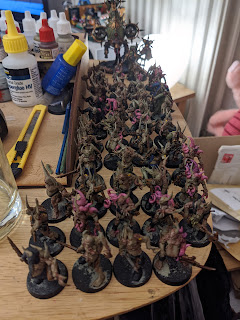 I then began to group the models according to their sculpt.  I then applied different colours to their clothing, taking one from each group as I did so.  This meant that no two models should look exactly the same.  I favoured Citadel Mechanicus Standard Grey, VMC 70839 Ultramarine, Citadel Death Guard Green, VGC Dark Fleshtone and Citadel Mephiston Red. I left some unpainted.  These received Army Painter Strong Tone Wash. 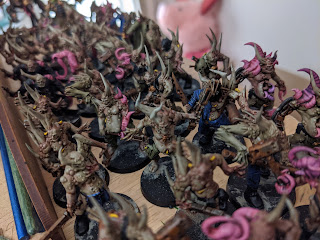 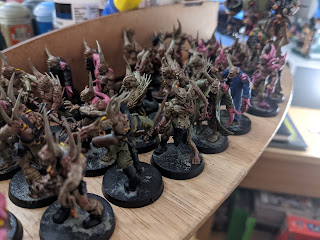 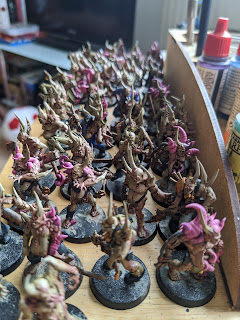 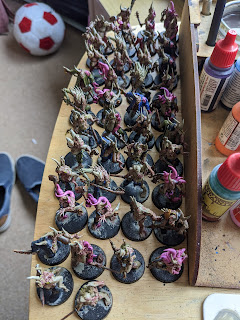 All metal parts were base coated with VMC 70863 Gunmetal.  When dried, I got a ruined old brush whose bristles resemble more of a hedgehog than a brush.  I dipped the ends into into some VGC 72044 Dark Fleshtone, wiped off the excess and stippled in as random a way as I could over parts of the gunmetal.  Then I took some VGC Orange Fire and did the same as before, focusing over where I had placed the Dark Fleshtone.  You want to use less of this than the fleshtone.  And it doesn't matter if the two colours mix a bit.  In fact, I rather prefer it if it does.  When all this is dry, I applied Army Painter Soft Tone Wash over it all.  And when that is also dry, I picked out some edge highlights with VMC 70864 Natural Steel. 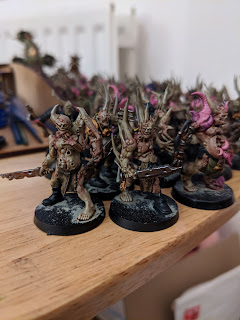 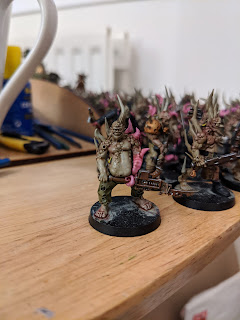 The next rather laborious stage was to reapply the VMC 70884 Stone Grey on all the boils.  This really made them pop (not literally, that would have been mingin'.  Would have made Papa Nurgle rather proud though...) 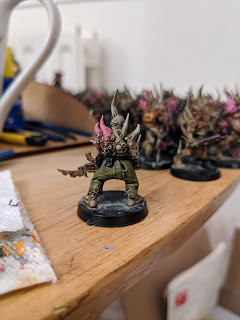 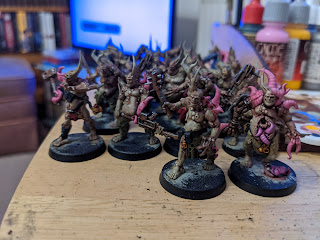 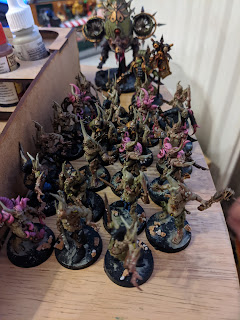 Then it was time to focus on the bases.  I applied some cork chippings and ballast with superglue. 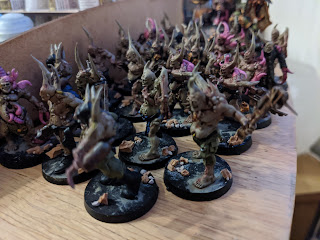 Then they were surrounded with Citadel Astrogranite. 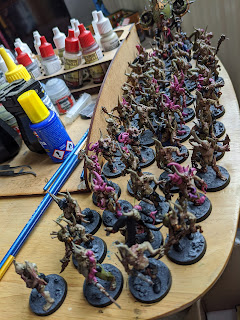 The rocks were then painted with Citadel Mechanicus Standard Grey, 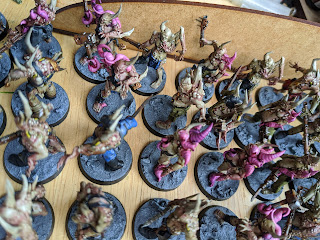 And then, by adding increasing amounts of VMC 70907 Pale Grey Blue , I drybrushed the bases.  The last stage was to paint the base edges with Citadel Abbadon Black 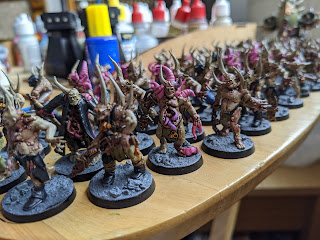 And then, because I was in shock that I could paint 46 models in six days, and do so whilst working, I got out the Really Useful Box I had waiting for them, and put them into their new home. 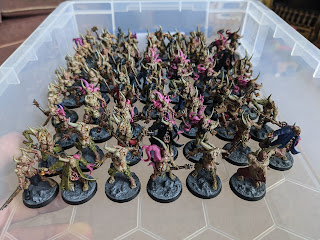 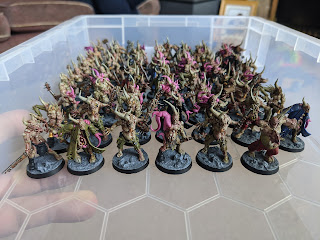 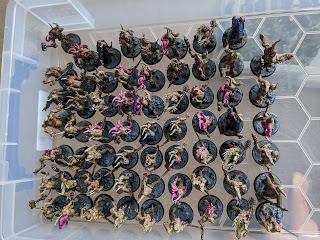 And then, just to show off, I got out my little light box and took a few detailed photos so you could get a good look at how the models had turned out. 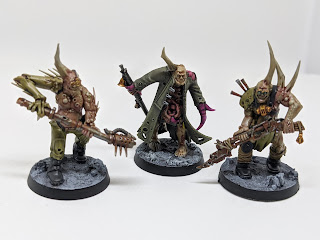 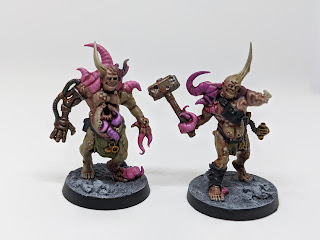 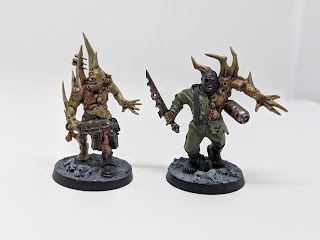 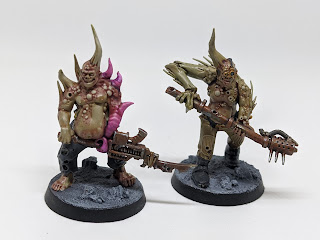 Personally, I'm incredibly happy with them all, and not a little bit proud.  I'd have never tried something like this before.  I honestly think it's turned around my whole approach to painting.  There could be a dramatic turnaround in my productivity now.
As always, thanks for stopping by!
Labels: 40K Death Guard Poxwalkers Warhammer 40K