I Can See Clearly Now, the Fear Has Gone...! 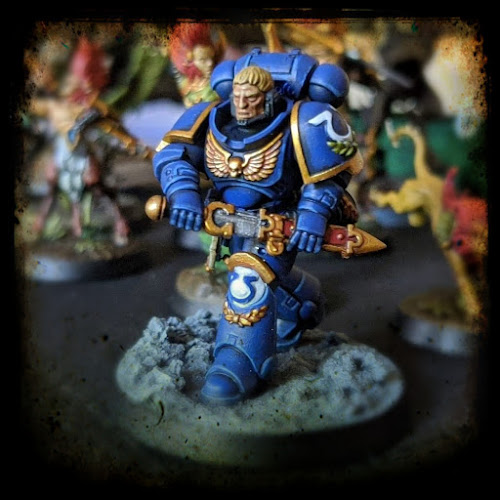 I hope you can forgive the lack of posts in recent months. This would seem even more out of the ordinary given that we're all in the grip of a global Pandemic, and most of us either have, or still are in lockdown.  I don't know about you, but my social media feed is full of everyone's latest project and roll call of the number of miniatures they have been able to paint since life has been put on hold.  In contrast, I've hardly posted, tweeted or shared anything.
Sure, one big reason for this is the fact that I've continued to work. And it's been busy. Yes, the way I go about it has been affected by lock down restrictions. But it's been a creative process rather than a restrictive one. And innovation and silver linings to clouds thinking (a term wot I have made up myself) can be good things at any time.
But here's where things become even more remarkable in my experience: despite being busy, I've actually painted a lot more stuff than I would normally. And, more importantly, I've learned a great deal in the process. As the title to this post implies, the fear of painting; that thing that most stymies productivity, is definitely in the rear view mirror now. I can't say it won't rear it's ugly head in the future. But I can say with a degree of certainty that I'll be in a better place to face it when it does rear it's ugly head.
So how did I get here? Well, I don't think it happened overnight, but there has been one big change that has made it all possible.
I've been spending increasing amounts of my hobby time painting miniatures, particularly since 2018 gave way to 2019. Before then I had painted some miniatures, but the majority of my time was spent making scenery. As you'll know if you've been following this blog, tight finances meant I focused mainly on skirmish games as these had a much smaller outlay to bring to the gaming table. However, skirmish gaming normally means you need scenery. Lots of scenery. No big green flat boards for this sort of thing. And this can be expensive. So I set about making my own scenery. And these projects have been the mainstay of my blog. 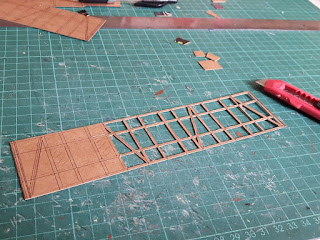 However, over the years I have been able to purchase models now and then as finances allowed, knowing that eventually I'd be able to move into large scale skirmish games.  And with the soon to be replaced 8th Ed 40k drawing me back into the GW fold, coupled with a more stable  financial footing, I have in the last couple of years become surrounded by many armies and time periods that are now available for gaming. Now, most people would have been able to take on a project, say The Sudan for The Men Who Would Be Kings and bring that to the table in one go. Purchasing would lead to assembly and building. This in turn would lead to painting. And then the army (or two opposing armies in my case) would be ready. Then they'd move on to a new project. In contrast, I've been gradually building up forces over many years. And they have pretty much all reached the ready to assemble and paint stage at the same time. 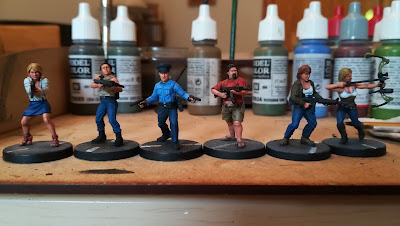 This doesn't create the most focused of experiences. So I would assemble something and then get distracted by the next project. This is bad. It has one problem. You never finish anything. And this has been my problem with painting.
So as the year began, I had found myself jumping between painting models for Age of Sigmar and Warhammer 40k. I was never on top of any deadlines for gaming because of work and family commitments. And when lockdown came, I noticed things weren't going to change all that much.
And when you don't have a Scooby's when you're next likely to get a game in, you start looking at everything you do have and want to paint it all. This may not be a problem if you have a dedicated hobby station with a desk and a place to leave it all out. But I don't. And as you'll see in a previous post, this was creating more instability.  I use a paint station. One that fits on my lap when I paint. 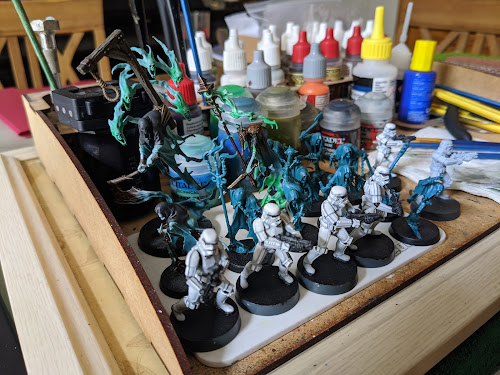 So after a period of painting bits of many projects, I realised I'd really gotten into the flow of things.  What had originally been a source of worry or fear, was now turning into an opportunity to try things out.  I was not only finding time to ;paint, I was actually learning that I could paint late at night and not be rubbish at it.  And this, in turn, meant I was actively looking for an opportunity to paint. I don't know if I had ever felt like this about my painting before.
And all this made me revolutionise everything.  I decided that it was high time I actually focused on one army.  And I meant it.  To do this though, I had to do some serious reorganising.  Again, if you have a dedicated hobby room or desk then you may never have to face something like this.  Or maybe you do.  Maybe you have so much of everything out and around your hobby station that you can't get moved for it all.  And nothing gets done because you have so much stuff in the way.  That was certainly my experience anyway.  Albeit in a smaller way.  You know, because I just have a paint station.
So here's what I did.  I cleared away the models out on my paint station.  They all went to their proper homes in their Really Useful Boxes.  That was the easy part.  Next came the decision over what to paint.  Having so many choices meant that this wasn't as easy as it sounded.  Because it's not just deciding what I wanted to paint at that moment.  No, it was about making a choice about what I wanted to paint many, many models for.
Now I have to admit, the news that 9th Edition was going to drop this summer was a big factor in my decision making process.  After all, this news meant I'd be playing A LOT of games of 40K once we safely emerge from lockdown.  And let's be honest, there's only so many times that you want to bring out your 3rd to 5th Ed Space Marine Models for a game.  Especially when I've been slowly building up some other armies over the years.  So I decided to work on the Death Guard.  I won't wax lyrical about the models here, I'll simply say that I had begun painting some at the end of last year and had really enjoyed the process.
Having made this decision, it was then a case of getting my trusty MDF paint station organised.  Away went all the paints and out came the ones I would need for this project.  This is one of those occasions where having a note of your paint recipes really does help.  My book was incredibly useful at this point.
And then the models.  Now, I keep all mine up in the loft.  It's great for storage space, but it's not so great when it comes to accessibility.  Many's the time I've thought about painting something in the past only to find myself giving up on the idea.  After all, I'd have to go up there, and that would mean moving everything piled in front of the door to the loft.  I'd then have to navigate the ladder beyond the door; sort through the boxes; find the models; bring them down.  And then I'd have to get the paint station cleared for action.  And move around the paints I needed...
Well, you can see how good intentions were often doomed to failure.
So I decided to put an end to all that once and for all. With the army chosen and the paint station ready to receive its next subject, I went to the loft and got down my box of assembled miniatures.  And even though there would be plenty in there to work on, I also bought down the box that holds all the remaining models that I haven't assembled yet.  And that way, if I ever got bored of the assembled models, I could dip into the collection and bring out something new.  I hoped that this variety within the army would help to keep my painting motivated and enjoyable.
And I have to say, it really has been working for me. 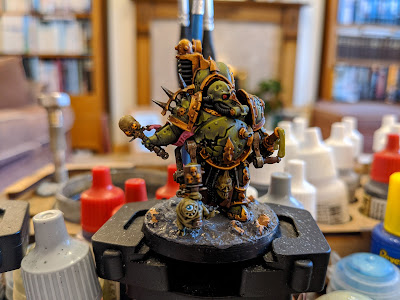 Let's be honest, there's no way I am ever going to get this army fully painted by the time 9th lands (heck, the preorders go up tomorrow!) But that doesn't matter one little bit.
You see, I've found a joy in my painting.  Painting lots of different models during lock down has allowed me to try out different painting approaches to see what works.  I've scratched the curiosity itch and gained confidence by the bucket load in the process.  And now, over time, I'm seeing an actual army emerge.  Sure, I'll never win any awards for my painting.  But I've found a greater reward than that: I've discovered a love for painting.  And because of this, I'm not frightened by a mountain of models as I have been in the past.  I'm not going to rush them.  Neither am I going to be put off.  I have the models within easy reach.  And any time I am able to do so, I can go and get my paint station and enjoy some time painting.
And that, friends, is something very precious indeed. 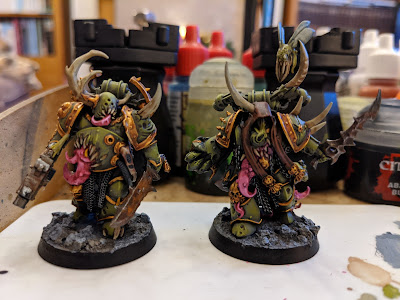