Of Bomb Vessels and Fighting Sail 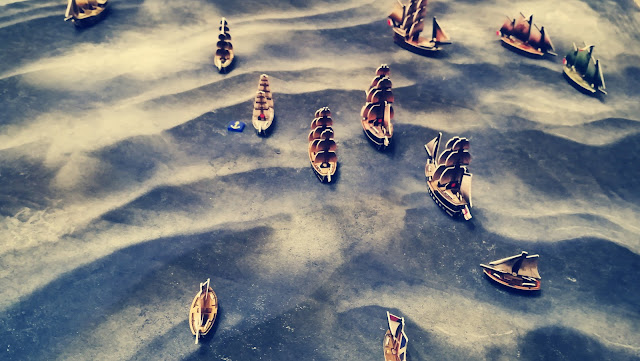 I have to confess. I've always wanted to have a go at wargaming naval engagements in the Napoleonic era. But not knowing where to start can be a daunting thing. So I've done little about it for more years than I care to admit.

When Osprey Wargames released Fighting Sail, I decided to go for it. And I'm really glad I did. However, I had no models, and no suitable gaming surface.

And then, when we were talking about what to game next, we hit on a wonderful idea. Why not just use those Wizzkidz Pirates of the Spanish Main plastic snap fit ships. After all, they hadn't been used in many a year.

Now if that idea appals the purist within you, please look away. None of the photos here will appeal to you in the slightest.

Unless you're interested in the problem we came across in our games a month or so ago. A problem with bomb vessels in the rules. We encountered this whilst playing the third scenario in the book. And we quickly discovered that they just don't work. Not at all.

Bomb Vessels have a Gunnery of 1 and always count as raking fire regardless of their position relative to their target. They cannot fire canon at short range and must therefore be anchored to fire at only medium or long range.

Now, what's the point of using them against shore batteries? You need a minimum of 3 damage to do anything to a shore battery. And as each dice is only one point of damage, a single bomb vessel isn't able to do any damage. Historically, the exact opposite was the case.

Let's run with this rule for a moment.  Let's assume that we have a bomb vessel anchored at medium range from a battery. There's no point of even considering firing at long range. Now, to hit with your one dice  you are going to need to roll a 4+, but that won't be good enough. You're going to need to roll a six.  Having done this, you would then need to roll another six to cause explosive damage.  This will then let you roll a third dice for a raking shot, which needs to be a 4+. So that's a six, another six and then a four or more.

Now there's a really slim chance of doing that now isn't there?

So I went onto the Fighting Sail Facebook group to ask if anyone had any thoughts on this.  I suggested that if Bomb Vessels were allowed to count as frigates, as 5th or 6th rate, they could be anchored together and thus fire in a squadron.  This, I figured gave them about their only chance of causing some actual damage to a shore battery.

To say the response was lacklustre at best would be a generous description.  In the silent weeks that followed, the post got a couple of likes and comments from another player who thought I made a good point and was interested to see what kind of response my query would get.

And after three weeks passed, I pretty much gave up.  We played a game where we counted them as frigates.  And they couldn't get anywhere near to the range required to make any difference.

And then things changed. The author, Ryan Miller,  responded to my query.  I'm quoting his comment directly here:

Sorry for taking so long to answer this!

I'm afraid I don't have a great answer - when designing this game I was worried about bomb vessels being used against ships in a strange way, and I didn't adequately assess their use against shore forts.

They should be considered frigates for the purposes of combining fire. I also think they should have a special bonus against shore forts, since as you said, they should be devastating against them. Perhaps +2 gunnery when firing at a shorefort? What do you think?

Obviously I was delighted to hear from Ryan.  And to find that we had some similar approaches was rather encouraging.   Here's my response, which I confess added in another query, since I had the ear of the author himself.

Ryan Miller thank you so, so much for replying to my query.

Firstly, combining fire is a great help. We have played  Scenario 3 a number of times. When we did so, combined fire seemed to be the only way of having a chance of causing damage. Giving them +2 Gunnery against a shore Fort would definitely help to make them more devastating. Not letting that apply to firing on another ship should limit people using them incorrectly.

And any increase in their lethality without adding to their points is more than offset by the trouble you have getting them into optimal range to bring their firepower to bear. We've found it quite difficult to get them there when an opponent is particularly determined to give them a taste of broadsides.

And while I have your ear, can I check the points in the scenario? According to p. 55 the defender gets a free 100 points and +10 fleet morale. Now, an additional 100 points equals an extra 10 Fleet Morale. Is this in addition to the +10 you mention? A 300 point game means you're looking at 40 or 50 Fleet Morale depending on the reading of the rules.

We've played it with both. On all occasions the attacker hasn't had a hope.

And for those of you interested on the points and Morale bonus, here's Ryan's response...

The extra points you get for shore batteries does not come with its own fleet morale bonus - though I can see why that is confusing.  So if you are playing a 300 point game, the defender would get 40 fleet morale, not 50

Armed with this knowledge, we set about playing another game with these rules. We randomly rolled the dice to see who would be the attacker, and it turned out to be me once more.  As you have read above, there are two issues with this scenario.  Firstly, having bomb vessels that can do the job.  Secondly, being able to get them into position in the first place.

The boars, as I said before, are from WizzKidz.  The gaming cloth was painted by my fellow wargamer Derek, as too were the shorelines.  And any tokens you see are from our friend David Drage of Iron Mammoth's Studio fame.  Boy do I wish I had a lazer cutter of my own...!

Anyhoo, here's my initial deployment.  Three 3rd Rates (I know one is smaller than the others but it was all we could find, okay?) , two 5th rates and three bomb vessels that are now frigates.  What could go wrong?  Well, a lot actually. 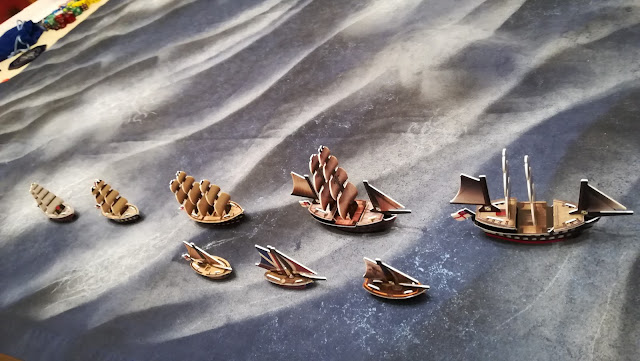 And here's those dastardly French at the shoreline int he distance. I should say that unless a certain sports outlet is willing to pay me commission, I should make it clear that there are many other similar shops out there...! 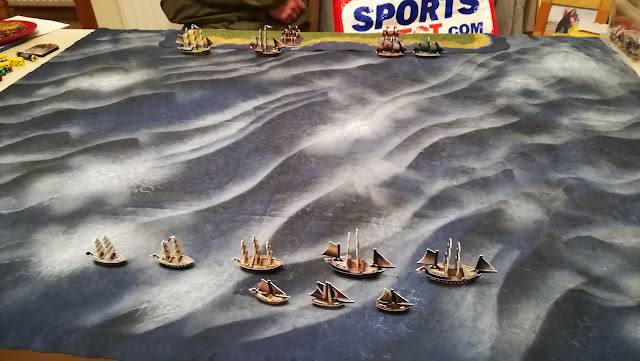 And here are the counters and templates made by Dave of Iron Mammoth's Studio.  They are absolutely first rate, top notch and bloomin' lovely.  And they belong to Derek, and not myself.  Am I jealous?  Not in the slightest, I say as my nose grows... 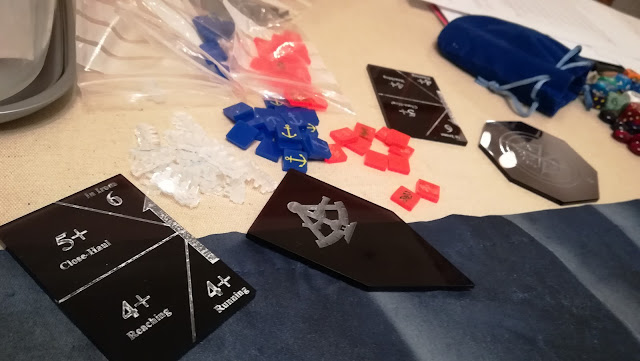 Armed with the trusty Lord Cuthbert Collingwood, we got off to a terrific start with all those +2 Sailing on first turn.  You could be mistaken right now for thinking I had a cunning plan... 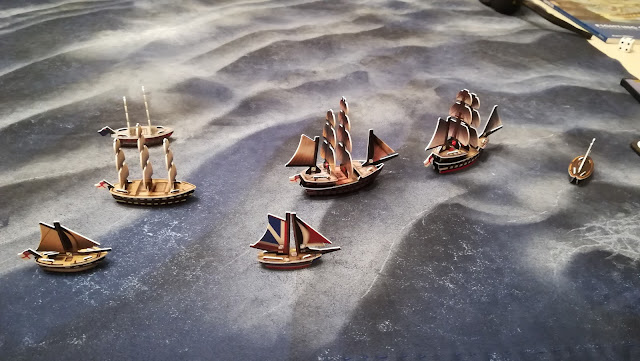 Those Frogs in response appeared to be a little more erratic... 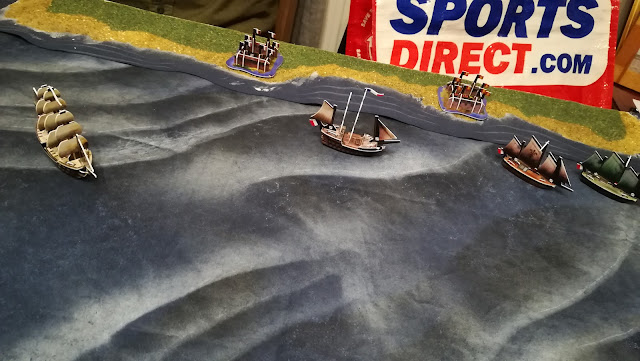 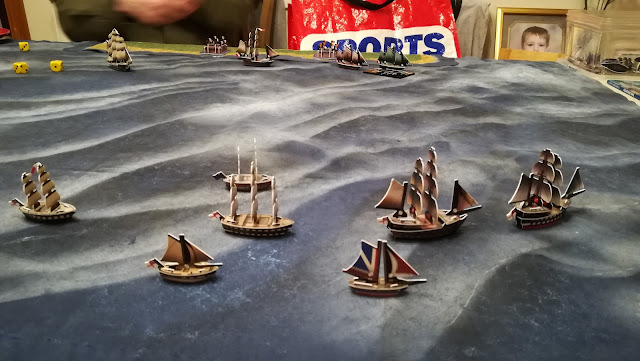 And then my lot started fanning out to cover the advance of the bomb vessels. 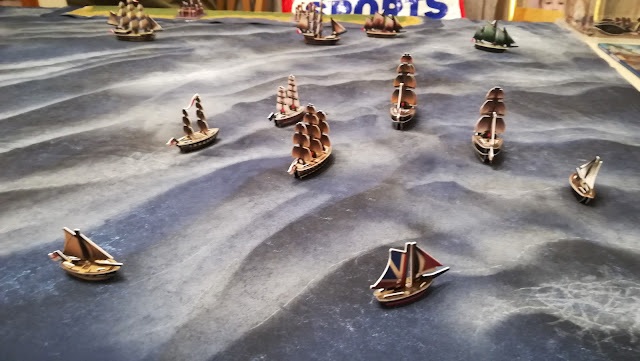 This next turn was going to be interesting... 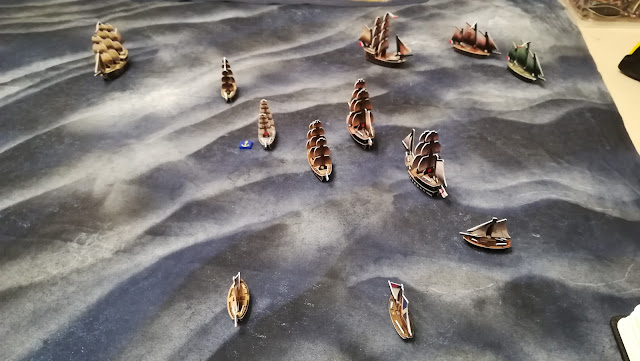 Especially as we dew closer for broadsides. 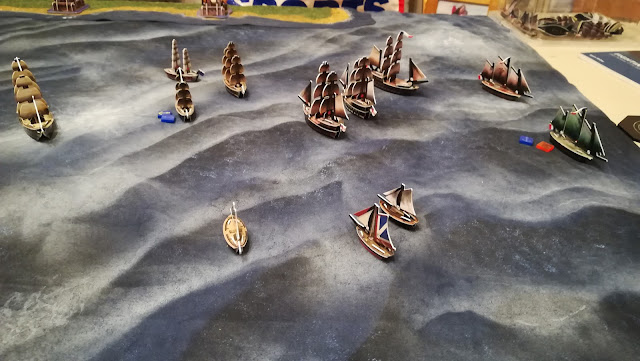 And then my fleet began to disappear.  Look at all those lovely wreckage markers.  Focus on how lovely Dave has made them, and not on how many are floating about where once I had a vessel.... 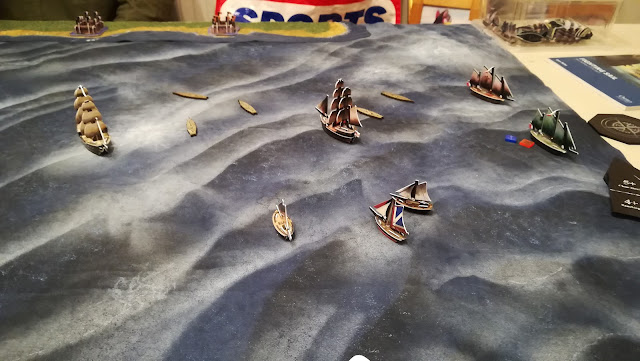 Hmm, a solitary third rate and my three bomb vessels.  This is going so well.  Not! 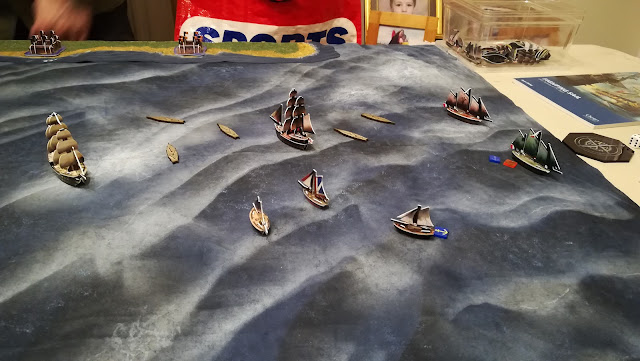 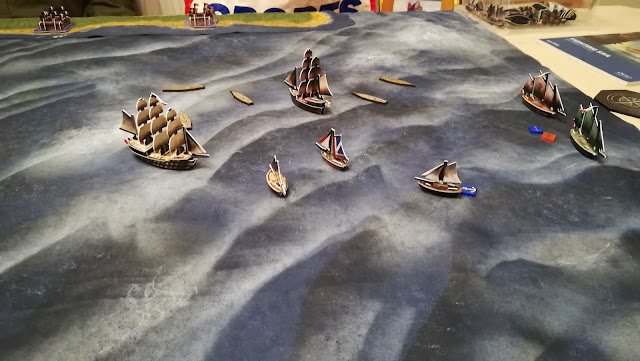 And here's the point of truth... 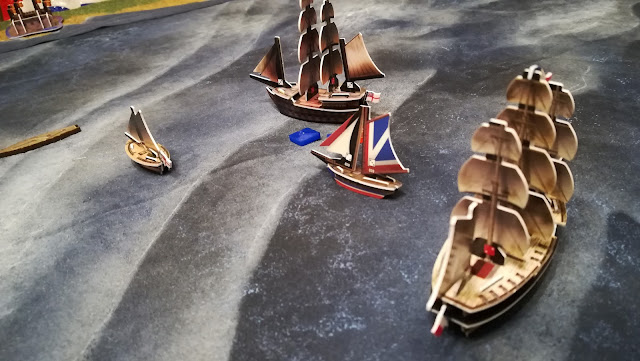 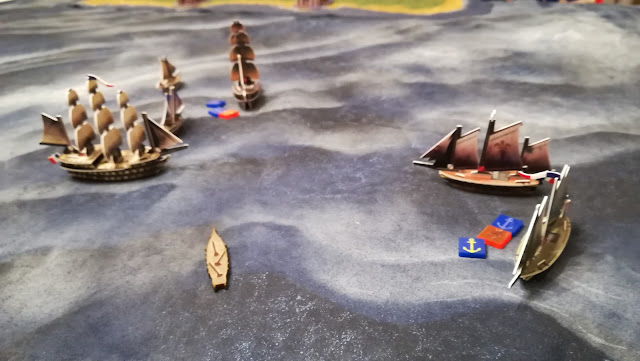 Yup.  Once again the bomb vessels, and my entire fleet, have been blown out of the water before they could do anything.  It was alt=right though.  I apparently still had 4 morale points left.  Go figure...! 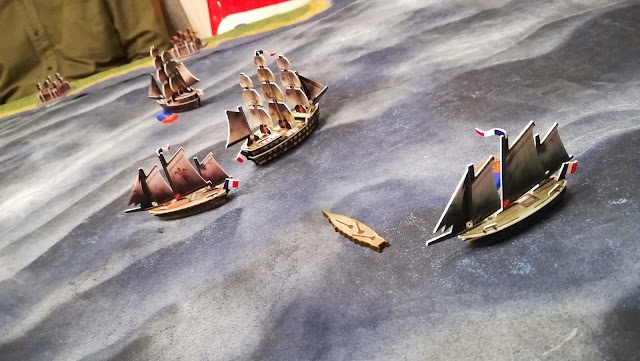 So what we did next was both academic, but necessary.  We pretended I had three bomb vessels anchored and rolled some dice to see if we could damage either of the large forts that were supposed to be the focus of my game.

We pretended first they were at medium range.  This was good.  Nine dice to roll for damage.  And every time we caused significant damage.  Even without raking shots counting, and taking into account any hull successes, I was causing around 5-7 damage.  The bomb vessels were destroying a fort each turn.  Quite often the dice rolls rendered any hull rolls superfluous.  Because when we rolled raking shots, the damage went up exponentially.

And what about long range? Well, that was a different story entirely.  Normally my 9 dice were rolling no more than five hits.  By the time we were making hull checks, only one or two points of damage were being scored.  And against forts, that's not going to do anything.  At all.

So, what conclusions can I draw?  Well, it seems that no matter what you try and do, you're going to want to use bomb vessels in squadrons, so they will have to count as frigates.  And if you want them to have any hope of causing damage whatsoever, you're going to have to get them into medium range.  This is almost impossible.  Remember, you ave to get them there, survive the next turn so you can weigh anchor and then fire.  Admittedly, I only had initiative twice in the whole game.  On the first and last turns incidentally.  So I was always getting shot at before I could return fire.  But nevertheless, it seems an almost hopeless task to get your bomb vessels protected and safely within medium distance of your intended target.

We've played Scenario 3 many times now.  And frankly we've lost interest in it.  Bomb vessels just don't seem to work.  So next time, we're going on to scenario 4 and see what we come up with.

Don't get me wrong, Fighting Sail is a wonderful game that's great fun to play.  I love it.  But I'd avoid scenario three and bomb vessels in general if I were you.  It might leave a bad taste in your mouth.  One that might put you off an otherwise thoroughly enjoyable set of rules.

I just wish I was clever to know how to fix it.  Perhaps the problem with abstraction is that you reach a point, or situation, where the framework just won't let you accurately reflect historical fact.