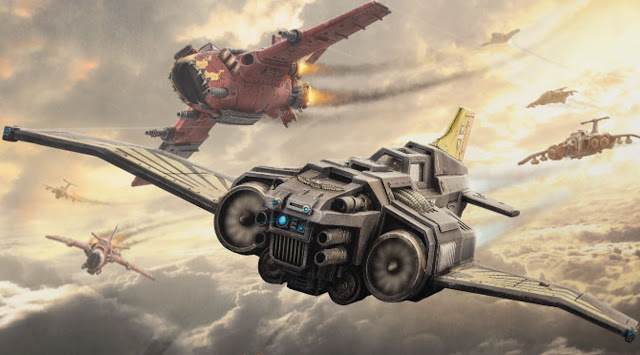 I have to be completely honest with you.  When I first saw that Games Workshop was going to be releasing a new edition of Aeronautica Imperialis, I was hyped.  I never had the chance of getting my hands on the first version published a number of years ago by Forge World.  I simply didn't have the money to invest in it at the time.

Of course, when the news broke, I saw posts appearing on t'interweb comparing it with the wonderful X-Wing.  It's X-Wing on a hex grid they proclaimed.  And before we knew it the naysayers and critics were jumping on the bandwagon, asking if this was GW's attempt to beat X-Wing.  And lots of people joined in.

I didn't care.  I was hyped.  Why?  Because for the first time in my life I was looking at the opportunity of owning a Thunderbolt.  Now that's something I've been wanting to do for many a year, ever since I first saw a model.  And yes, I could never afford one.  Not even now.  At £102 it's never going to be justifiable in my book.  I may just try and scratch build one some day soon.

But those thoughts went straight out of my mind when I saw the game.  And what followed can only be described as being a fatal series of events...

My good friend was also tempted by the game.  And as he's always popping in and out of the local Warhammer store (yup, it's changed its name recently-ish) he got a chance to play a game a few days before it was released.  Now, I know that GW has a habit of only supporting boxed games for a short while.  We've suffered this with Necromunda and Blood Bowl in particular, let alone more recent games such as Kill Team.  But of course, my friend knew I was interested.

And then the game was released.  Our resolves were admittedly weakening.

But my friend broke first.

He had a day off on Monday and was due to head into the store anyway.

And when he left, he'd pretty much purchased everything he could.  He'd even done what I never could.  he'd split the models with another friend so he had a double shot of Imperial models.

Well, before we knew it, he was round and he played a game with me.  Admittedly it was two Thunderbolt Furies against each other.  (I claimed mine was piloted by a traitor) And you know what, I was hooked. Totally and absolutely.  Yes, I lost.  But I was a traitor so the universe was good.

And a day or so later I'd discovered that Wayland Games were offering the best deal for an online purchase at the time.  So you know what I did?  That's right.  I went and ordered it.  This, you'll understand, is a VERY BIG THING.  I don't normally have the means to do anything more than look at a set like this with longing.  But life has moved on and I'm able to do something like this every now and then.  (And I will never, ever forget how blessed I am for this to now be so.)

Now, a big part of the appeal of Aeronautica Imperialis is the models themselves.  I just love them.  The amount of detail on them is frankly incredible.  They are a thing of beauty.  And most importantly, they're not tiny.  I think I read somewhere that they are scaled to be around 6mm.

Now, it's a credit to GW that they can produce a game that makes you want to buy into.  The imagery of the game is incredibly reminiscent of The Battle of Britain.  And as we commemorate the 80th anniversary of the start of the Second World War, this is the kind of reference that makes the hair on the back of my neck rise almost as much as the sound of the Supermarine Spitfire's Merlin engine always will do.  (I grew up n the shadow of Rolls Royce, you see.)

Let me put this out there.  I have ALWAYS wanted to wargame WWII dogfights.  The Battle of Britain in particular.  But I haven't managed to do so yet.  Why has this been so?  Well, you could blame it on the rules that seem to be more about charts than gaming.  Rulebooks that seem to be only written for an expert to understand.  But for me there's something even more serious than that.

It seems that most games use 1/300 scale.  Now this, they say is so it can fit on an average sized gaming space.  Of course, I've been tempted by Warlord Games' Blood Red Skies.  That uses 1/200 scale planes.  I'm sorry, but that's still tiny.  You see, I love wargaming because of the spectacle of the game.  It's about looking at beautiful models on lovely terrain.  So squinting at a blob of metal or plastic that's not very big on a basic blue cloth just doesn't cut it for me.  I'd much rather go for something 1/144 or 1/100 scale.  Preferably on a lovely gaming mat with fields far below and clouds obscuring the view.  (Now if you know something like this that doesn't need a football pitch to play it on, please drop a link in the comments below!)

And here we are with some lovely 40K models on a 3'x3' gaming surface that comes in the box.  Sure, the more planes you put on the table, the bigger the surface will need to be.  But as far as I am concerned, this is a stunning game.

I couldn't wait to assemble the planes.

Naturally, I'm working on the Orks first.  But I'm delighted to be able to get to work on the Imperial planes afterwards as I will be introducing some others to the loveliness of Aeronautica Imperialis.

As I've already said, the models are incredibly detailed.  They also come in a lot of parts.  The sprues they are attached to are very full.  There's no large gaps.  So how are they to assemble?  Well, perhaps a comparison is in order.

Games Workshop models seem to begin with the Easy Build kits.  These have two to six parts generally that push fir together.  Well, that's not quite true is it, because as we all know, they are blooming hard to fit flush together.  This, I think, is because they are modelled on computers.  This means that the pegs are the same diameter as the tubes they are supposed to fit into.  And just as long.  So if you're not using glue, the air gets trapped and you can't get them to fut together properly.  And if you try adding some glue into the space, then you know it's never going to happen.  What I do is simply cut about 5mm off the pegs and apply glue.  Works perfectly every time.

Now, at the other end of the spectrum we have the Necromunda miniatures.  If you've ever made one you'll know exactly what I'm talking about.  These are the 28mm wargaming equivalent of a good Dragon 1/35 WWII model.  The head has three parts.  The bits are tiny.  Like the quick build models they only produce a single pose.  But the sense of achievement when you've made them is second to none.  As a modeller, Necromunda plastic models are an absolute joy to make.  (Unless you're in a serious rush, in which case they are annoying in the extreme!) 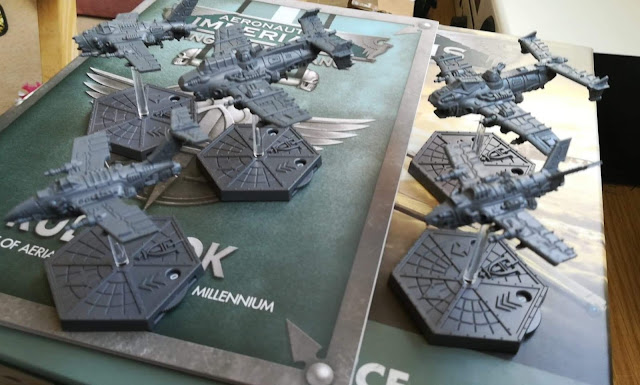 Where do these Aeronautica Imperialis kits fit in relation to these models?  Probably a little shy of the Necromunda miniatures.  There's no attempt to split the fuselage down the middle so all you have to do is stick two halves together.  No.  There's a top and a bottom.  And a seperate nose.  And separate engine.  And a tail in two to three parts.  And that's before you begin to add bombs to the underside of the wings.

I was assembling the first Dakkajet nose which had two parts plus two gunz.  Well, I decided to apply a little pressure to the two halves of the nose cone to encourage a good bond.  This was the point that the pieces flew vertically out my fingers.  Finding such small pieces reminded me of a similar incident with a Van Saar head...

These kits aren't going to appeal to someone who doesn't want to put some effort into preparing the models for a game.  But I don't think GW are trying to put something on a shelf next to a game of Monopoly for example.  What they are offering though is something different in experience to X-Wing.  It's asking for more of a commitment, as it does with all its games.  Sure, with the introduction of different coloured plastic, you can certainly play games such as Shadespire without applying paint to your models.  But most of us who are in this hobby understand what's needed to bring the games we play to life before us.

What you get in Aeronautica is a group of nine beautiful models on bases that are crying out for some paint to be applied to them as well. You get a poster thickness gaming surface, rules, assembly instructions, two QRF sheets and tokens to play the game. Oh, and some rather oversized bubble wrap on top to stop the contents bouncing around. 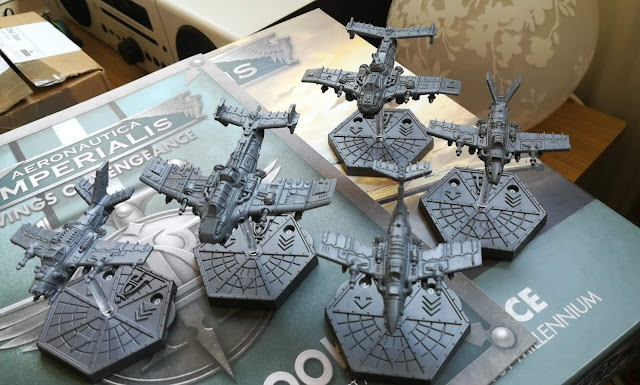 And beyond all that you get a fun little game that give you every excuse to make the sound of soaring planes whenever you start to play.  And frankly, that sells it for me.  And the icing on the cake?  That's all the ways in which you can introduce the word 'dakka' into your sentences....