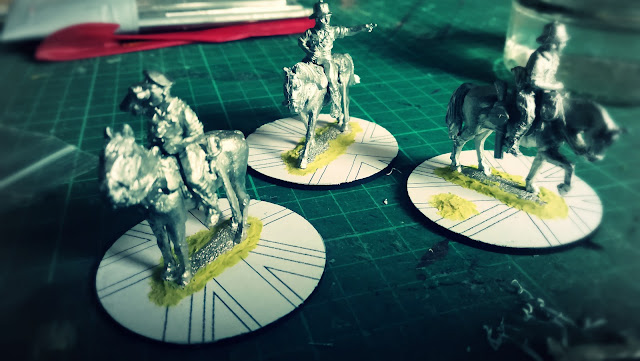 I've had this idea for Jump Off Points for Chain of Command rattling around in my brain for months. I love the idea of being able to add models to markers, and having had the chance to see how a game looks courtesy of the good folks at Deep Fried Lard, I was even more determined to have a go.

Which got me thinking.

You see, I initially thought I'd put some figures on my Patrol Markers, and then go for some Jump Off points similar to those used by Lardy Rich himself on those Beasts of War Let's Play videos.

But then I got to thinking. What do you do if you need to piggy back one off another in the early part of the patrol phase? MDF counters can only stack one on top of the other if they don't have miniatures on them.

Of course, by this point I'd already gone and purchased some miniatures for them. And a set of 50mm MDF discs to put them on. Oh well.

So I decided to use the miniatures for my Jump Off Points instead. Now, I know most JOP's are 30mm diameter, but what the hey, I'll just measure deployment from the middle of the base. Or knock off an inch and measure from the edge. It's the same difference.

And with that decided, I set to work.

Now, it's worth pointing out that there's a much simpler way to do all this. Least effort of all is to go to the TooFatLardies website and download a set of Patrol Markers and Jump Off Points. You could even complicate things a little by cutting them out and laminating them. Or, if you want something a little more robust, you can buy a set of MDF markers from Warbases, or again from TooFatLardies themselves. It's a lot less bother than I'm going to, that's for sure. 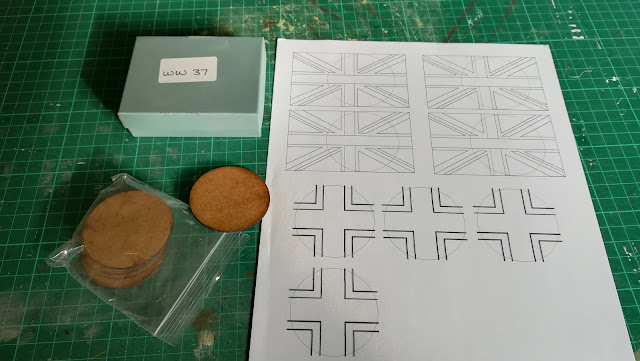 I had this idea for putting my models on a Union Flag. I like the idea of the model partly obscuring the flag. My hope is that in this way, it's still clearly a visible JOP on the table, but it has something of interest greater than a simple disc with a flag on it.

Of course, there was no way I was going to be able to draw a Union Flag freehand on my MDF base. So here's what I did.

I found a line drawing of the Union Flag online and opened it in Publisher. By using the measurements in the margins, I was able to size it to fit a 50mm diameter circle. As you can see, I wanted to offset the flag from the centre of the circle. I haven't seen this idea on any of the availabe MDF sets.

Oh, and while I was at it, I decided to try something similar with the Wehrmacht markings. Unfortunately, it doesn't have so much detail and doesn't work so well at an offset angle. I'll talk about my German JOP's in another post.

I had originally thought I would print it out, cut it out, colour the back with a 4B pencil and then scribe the flag directly onto the base. But once again the fear of a freehand scribble put me off that idea. Instead I decided to print a design for each base. I would then cut it out and glue it on with PVA.

Of course, thanks to the law of averages, there was a slight overlap. The paper discs were slightly larger than the bases. Now, I initially tried up wending them, laying them face down on my cutting mat and then using a sharp craft blade to cut away the excess. This proved to be not so good, for it ripped a little on the surface.

So I turned it right side up and cut off the excess from the top, slicing downwards using the base edge as guide. And with that the problem was solved. You can see the difference in the next photo. 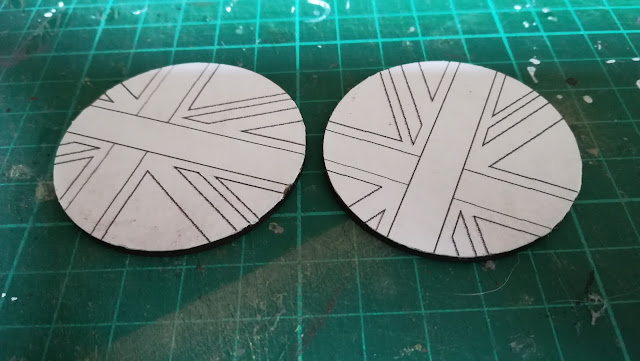 Happy with the result, I set about working on my models. I'm using the command set of the British Mounted Yeomanry from Perry Miniatures.  I love these models. 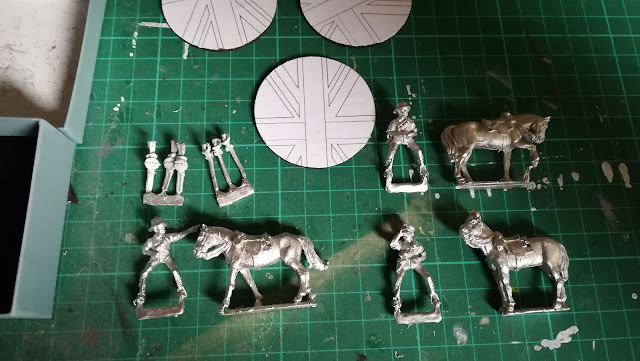 As you can see, these are two part castings with the rifle and sabres as additional pieces that fasten onto the right and left side of the rear of the saddle. 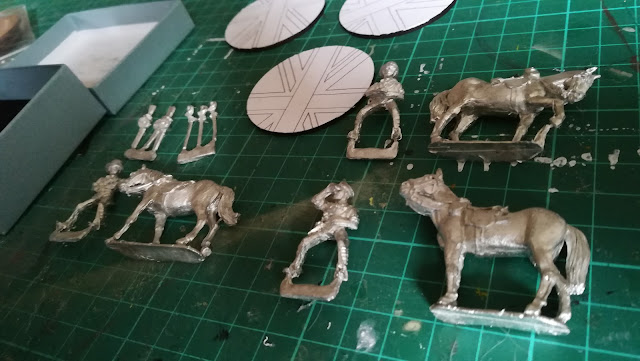 There was very little flash on the models and we're a delight to assemble. It's been a while since I painted a metal model, but I'm looking forward to painting these. 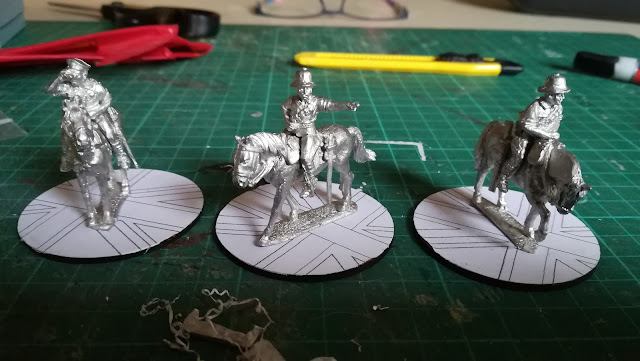 As you can see in the next photo, I placed the models in the centre of their bases, each placed differently in relation to the flag underneath. 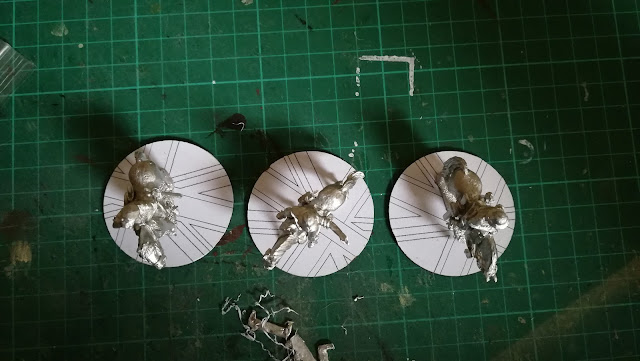 I wanted to bend the models into their bases. The metal bases on the models create a lip. So to solve this, I went and dug out my trusty milliput. I rolled it into thin worms, very much like the plasticine ones I seemed to make all the time in my formative years in nursery. 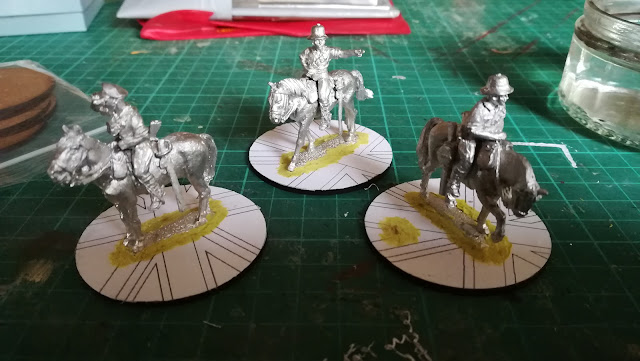 I then applied them to the edge of the metal bases and used one of my dental probes to push the milliput in place. 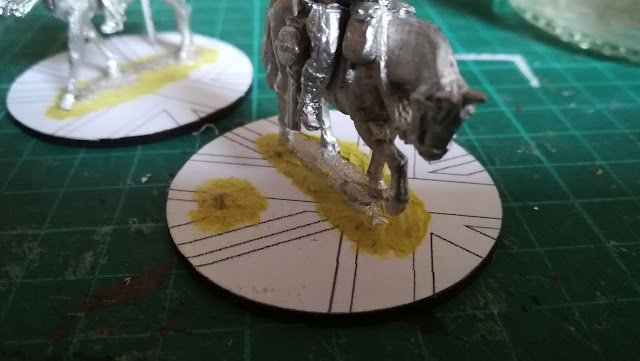 I also used the little I had left over to create an extra mound. I'll put some static flock on this bit. 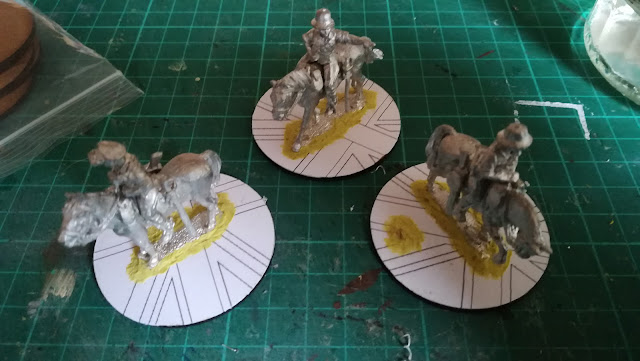 And then I had to leave them to dry. 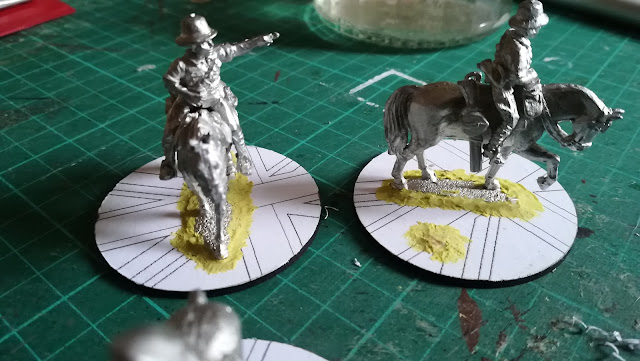 Hopefully I'll be able to post some painted examples soon. 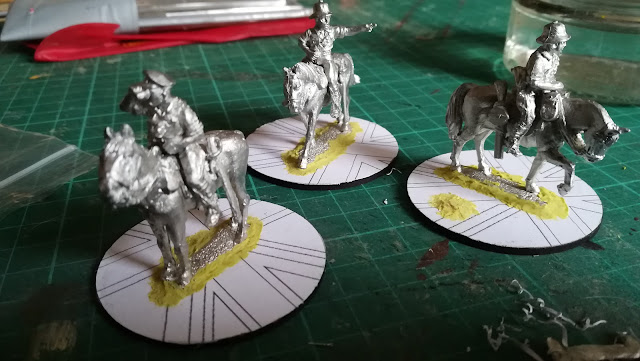