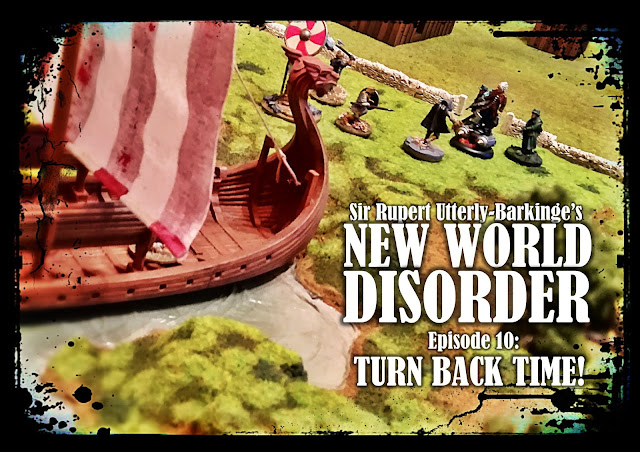 In the last episode, our brave heroes had travelled to the future.  They found themselves in a dystopian nightmare ruled by the undead.  They learned that the secret to reanimating the dead, first discovered by the Society of Thule, had been augmented by the nefarious schemes of a mad scientist by the name of Herr Doktor Kobalt.  In an attempt to ensure the longevity of its instigators, the Doktor had procured an elixir of life.  Those who had established the Thousand Year Reich would live to see every year of it.

However, there were two problems.

Furst, the elixir had been obtained from the fell Draugr.  You'd have thought that would have served as a warning to the Doktor.  But it didn't.  This, of course, adds further weight to the theory that being a Nazi twat is detrimental to your brain cell count.

Second, the aforementioned Nazi Doktor twat hadn't counted on the tenacity of Sir Rupert Utterly-Barkinge and the ever-faithful Private Gathering.  They had witnessed their friends and companions Count Otto, Goonda and Sergeant Reynolds pay the ultimate sacrifice to ensure their escape from the hellish future they had travelled to.  And now, nothing was going to stop them driving to the past to ensure the elixir, and Herr Doktor would never make it back to the future. 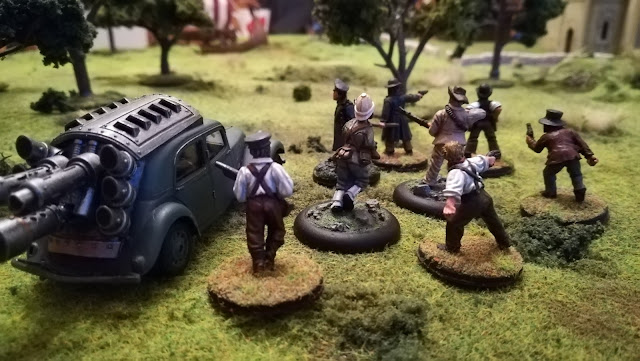 Welcome then to the final thrilling episode of our campaign!  The Ministry of Gentlemanly Warfare, Messrs Cartmell and Murton, have created a number of different rule sets, each using the same core mechanics.  In them, the authors have created a toolbox that allows the player to create their own individual characters and monsters.  We've used that freedom to create this campaign.  In the process, we've pushed things forwards to the Second World War and beyond.  And here, in the conclusion of the game, we're adding elements of In Her Majesty's Name and Blood Eagle.  If nothing else, our campaign highlights both the great flexibility of the rules and the immense amount of fun you can have playing them. 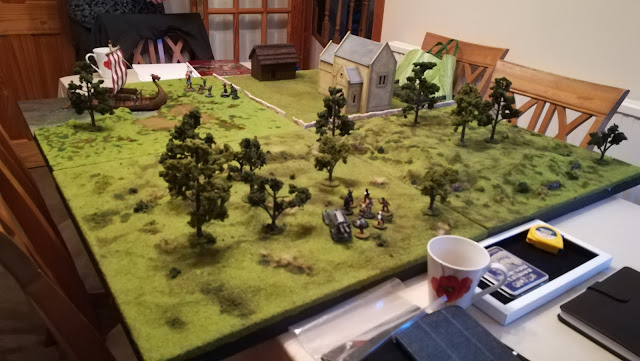 We went for the usual 4'x4' gaming surface and festooned it with some of my Anglo-Saxon terrain.  Derek provided the excellent longship he'd been working on.  This was kindly on loan to us from David of Iron Mammoth's Studio.  When we placed it on my modular terrain board you'd honestly think it had been built with this boat in mind! 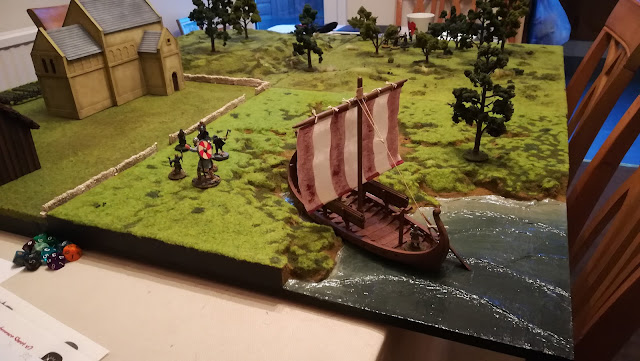 Derek had put together Doktor Kobalt's force to represent the moment he received the elixir.  He had two Jagers with revivifiers and a number of Draugr led by a Sorcerer. Of course, he also had a Jotun. 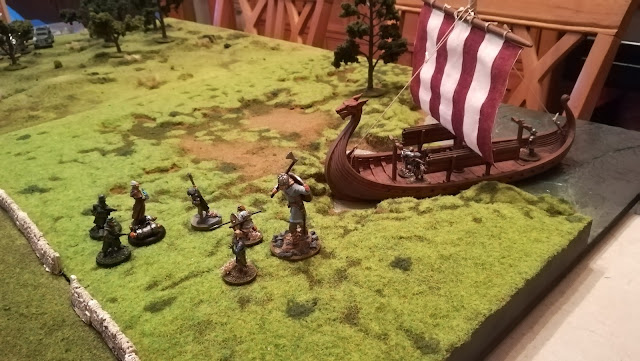 Sir Rupert had wanted to go back to his present to pick up his then-living companions before heading back to the past to stop the evil Doktor.  However, the German Officer who had travelled back in time to enlist Sir Rupert's help had gone on and on about the theory of time travel and parallel universes.  However, since Sir Rupert and Private Gathering couldn't muster 140 points between them, we decided that the officer would stop pontificating long enough to allow Sir Rupert to pick up the five Secret Agents.  He also made sure that they had rifles with them.  This, we hoped, would give him a fighting chance. 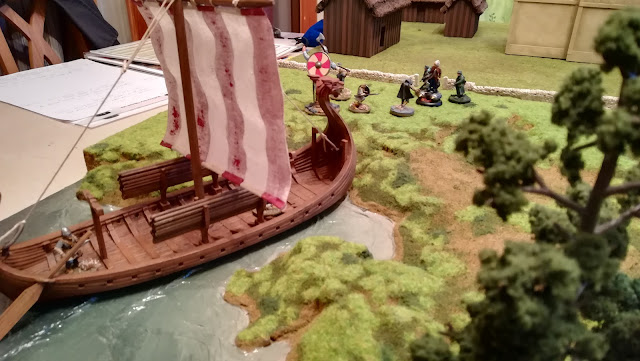 Herr Doktor didn't now why a group of strangers know his past and the draugr's future had appeared beside the time machine.  Nor did he know why said time machine had relocated itself to the woodland instead of being parked beside the church.  What he did know was that he was going to find out.  The Doktor's objective was to get to the car and gain possession of it.  he'd be able to do this by being in base to base contact with the vehicle and no enemy figures contesting him.

In contrast, Sir Rupert needed to kill Herr Doktor and the jagers.  Of course, the Jagers had revivicators which would make this a bit of a problem.  However, since a Zeds only interest in brains is in relation to the main course on a menu, we decided that as long as they were killed in life, it wouldn't be necessary to have them killed in death as well.  Of course, those Draugr had very good armour values.  Holding back the tide might not be very easy... 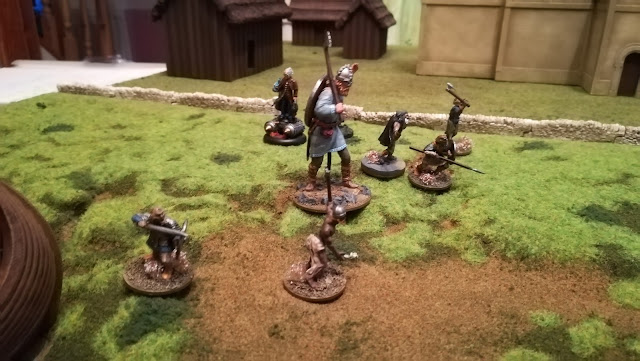 As always, the defecting German officer is an NPC.  He activates independently and follows Sir Rupert.

No dice rolls would be fudged in the telling of this story. 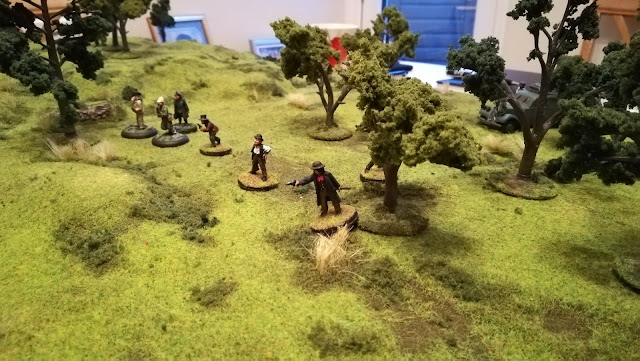 As the game began, Sir Rupert's men moved forwards through the open woodland at a run. They wanted to get to a position where they could fall back and defend if they were overrun.  Taking the initial stand beside the time machine would expose it if they were forced back.  Sir Rupert wasn't going to let that happen.  With their line in place, they stood their ground, waiting for the opportunity to fire next turn. 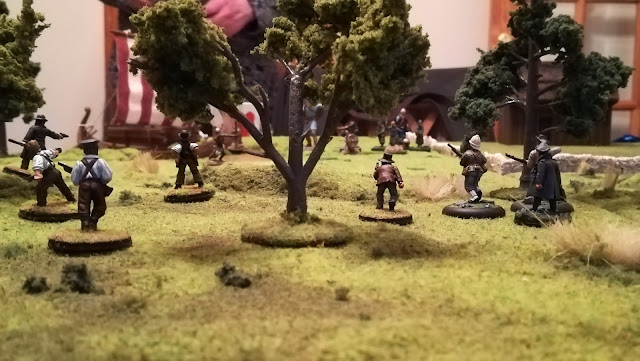 Herr Doktor's men did the same.  Sir Rupert levelled his Hunting Rifle, took aim and fired at one of the Jagers, killing him instantly.  Private Gathering's shot hit but caused no damage. 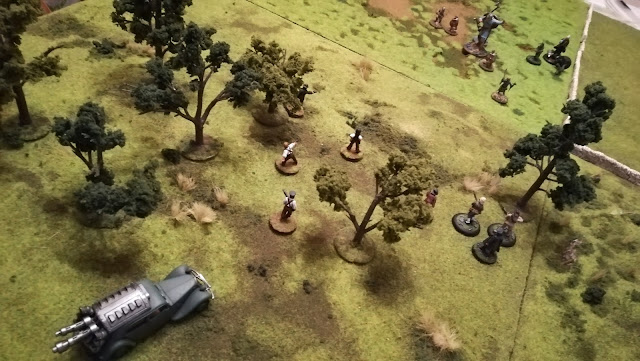 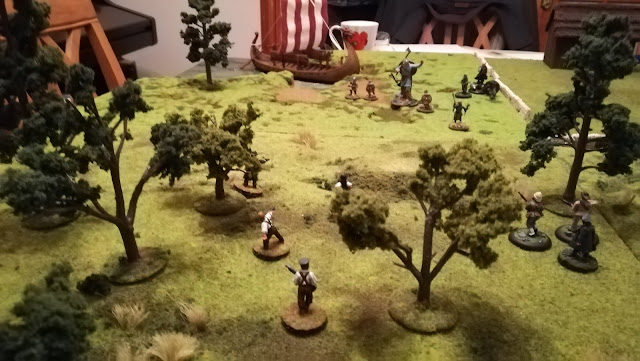 Sir Rupert's men kept up the cycle of fire, but high armour and good Pluck Rolls meant that their enemy was not exactly being thinned out as quickly as they wanted.  Add to this one of the Secret Agents had jammed his rifle and it was now useless.  And the dead Jager had now become a Nazi Zed. 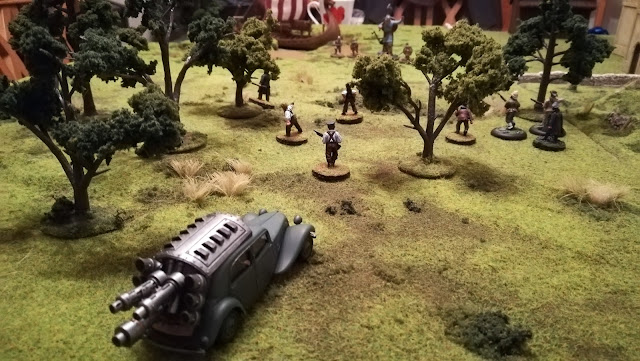 Suddenly, one of the Draugr reached Private Gathering and they became locked in combat. 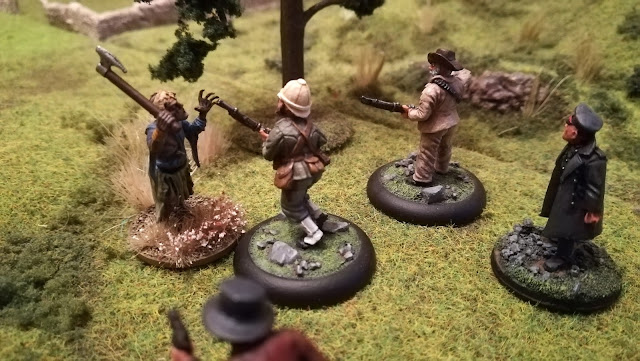 All the time, Herr Doktor's men kept advancing.  The Jotun was a particularly worrying opponent. 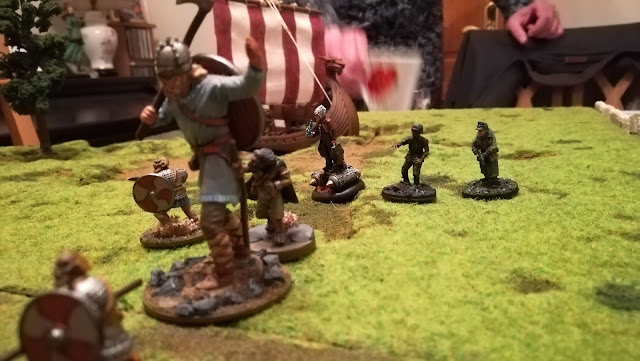 More ineffective firing followed from the Secret Agents.  Thankfully Sir Rupert's aim was true and he managed to kill the second Jager.  Sadly, Private Gathering was failing to stick his cold British steel into his assailant. 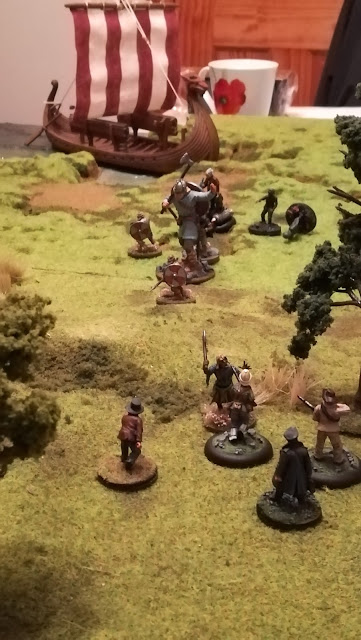 And the Draugr continued their inexorable advance. 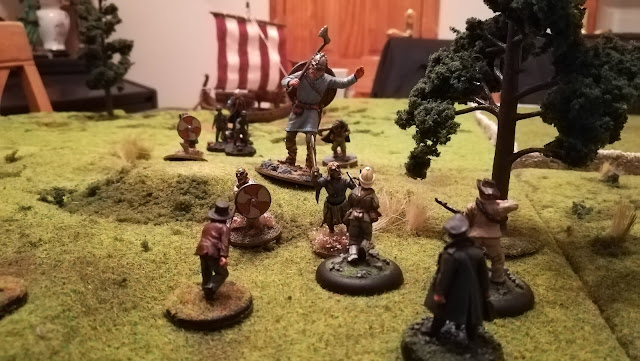 Sir Rupert wanted to shoot Private Gathering's assailant but decided the Jotun was by far the much bigger concern.  He took aim, hit and killed the giant! 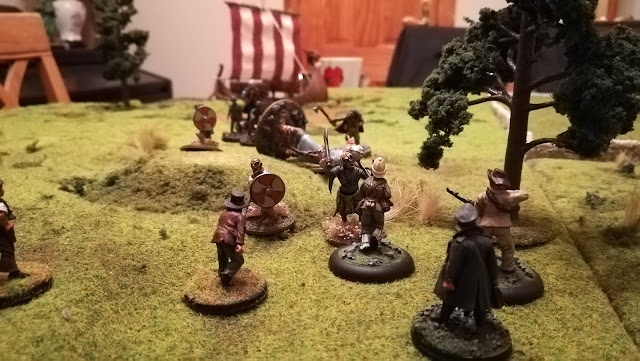 Buoyed up by this terrific shot, Private Gathering managed to injure the Draugr.  It failed its pluck roll and was removed. 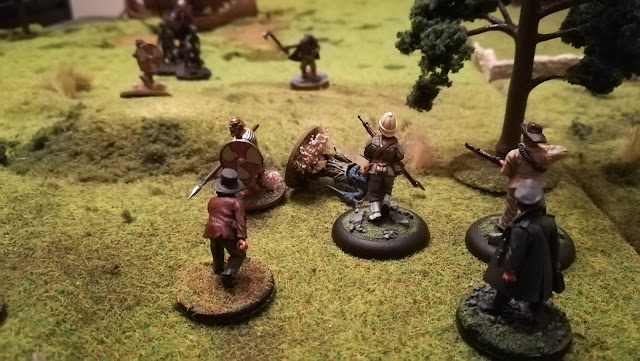 By now Dokpr Kobalt and his Nazi Zed companions had arched their way around their enemies' right flank.  Both Zeds had been hit once, but thanks to their numb talent, the damage had been shrugged off.  By now, many Draugr had charged their opponents. 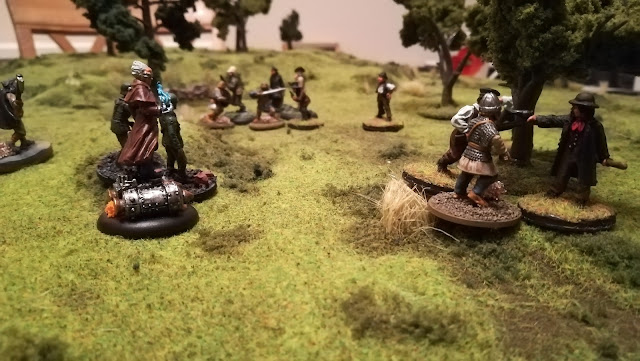 And as a Nazi Zed charged the Secret Agent whose rifle was now useless, he failed his pluck roll and ran away.  Sir Rupert managed to kill the sorcerer with a single shot. 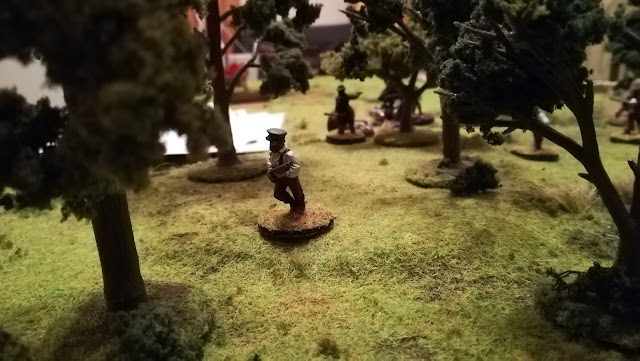 When the second Nazi Zed charged, the other Agent did a runner too. 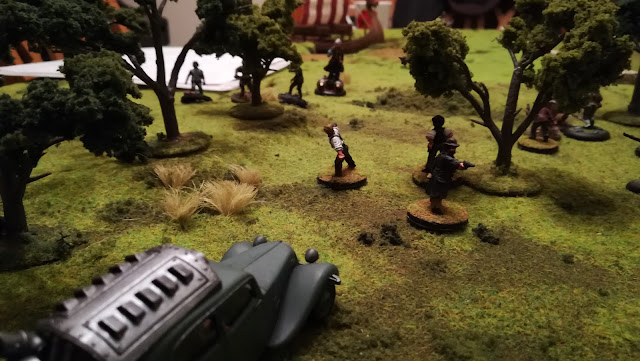 As Doktor Kobalt and his Zeds began to make a wide sweep towards the time machine, skilfully placing themselves where the trees blocked their opponent's line of sight, the frightened Secret Agent regained his composure and charged into melee. 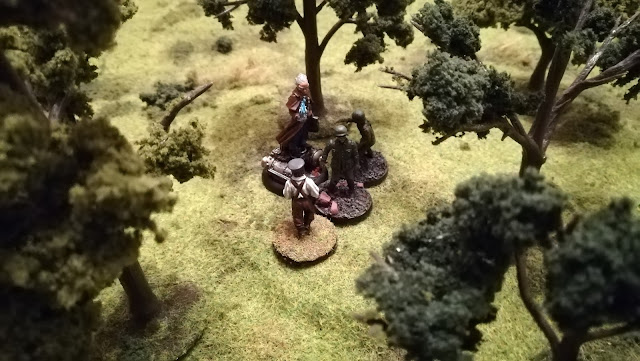 More Draugr were falling than Secret Agents.  They bravely held the centre, and Sir Rupert and Private Gathering were locked in combat with a Draugr warrior with a very high armour rating.  The defected German Officer had by now begun to back away, fearing the worst. 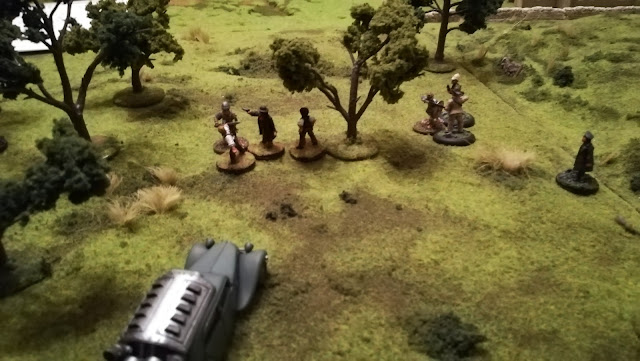 But then our brave heroes were finally successful.  Suddenly there were no Draugr left on the table. 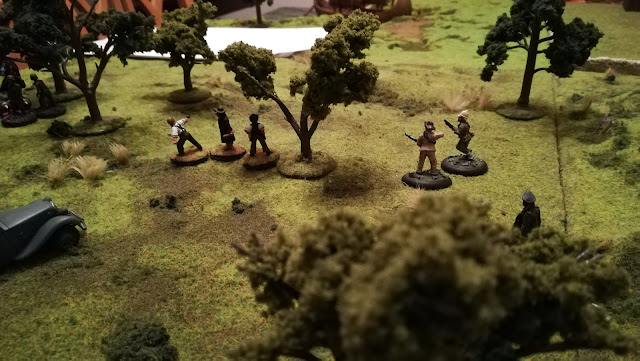 But the time they had been occupied in combat had allowed Herr Doktor sufficient time to dispatch his assailant and get alarmingly close to the time machine.  With victory in his grasp, it would all be down to the shooting phase. But the Nazi Zeds were blocking line of sight to the evil Doktor... 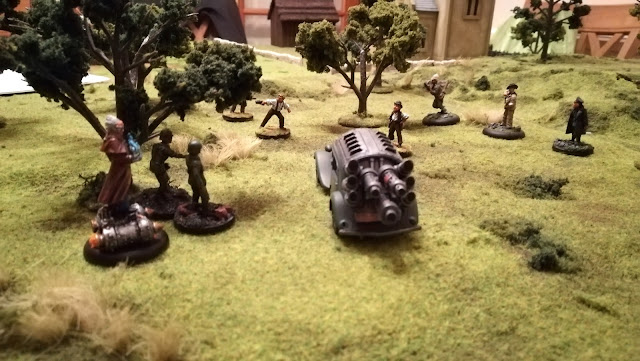 The first Secret Agent fired, and missed.  The second hit, but failed to cause any damage.  Private Gathering took aim and fired.  This moment was crucial.  If the Zed was killed, Sir Rupert would have a line of sight to Doktor Kobalt.  If not, it would be down to the initiative roll next turn to see who would activate first.  If Doktor Kobalt managed to win that and activate first...

And this was the moment the pluck roll decided that the Nazi Zed had been knocked down! Not as good as a kill, but Derek and I agreed that it would allow Sir Rupert an opportunity to take the shot at Doktor Kobalt... 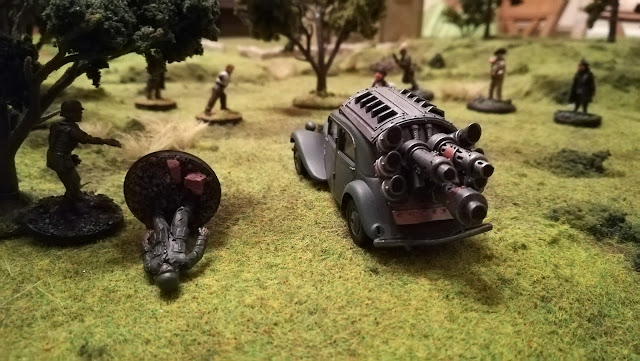 Sir Rupert took aim.  He fired... successfully!  It came down to the evil Doktor's pluck roll... which he failed!

As the Doktor's body fell limp to the floor, the Nazi Zeds beside him collapsed.  Sir Rupert rushed forwards to check his handiwork and to crush the vial containing the elixir under his shoe.  He stepped back in surprise, for everywhere the liquid spread, it turned the grass grey.

"Right," Sir Rupert said, "Let's get back to our own time.  I'd very much like to see Count Otto, Goonda and Sergeant Reynolds again."

"And then what, Sir Rupert?" asked Private Gathering.

"Then?  Then, my good friend, it's back to Blighty.  I haven't had a good cuppa in weeks..."
Labels: In Her Majesty's Name Sir Rupert Utterley-Barkinge Sir Rupert's New World Disorder The Ministry of Gentlemanly Warfare