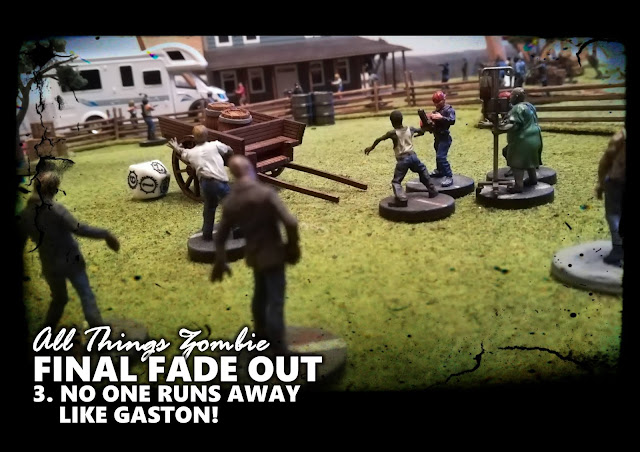 Baz flinched away from Dorothy as the young blonde screamed in his face. This was not the same Baz from the diner, but another of the so-called “Disciples” of the original, cosmetically altered to match his idol’s appearance. They had arrived at the safe house several days before, finding this new Baz hiding out inside; as promised, he had been only too happy to welcome them inside and provide warmth and shelter.

But now it was getting a little too warm.

“What is that?!” Dorothy shrieked, pointing through the window at a large burning bonfire outside, the flames casting a dim orange light into the night sky, one of several forming a half ring across the front of the house. Baz swallowed and tried to stand a little taller.

“Whilst we hide here, with no Zeds in the area, there are no Zeds being killed!” he explained, puffing his chest out, “By drawing them here, I shall put them all out of their misery, as is my holy duty!” Clutching his chainsaw, he strode to the door and left the building, headed for a further bonfire standing as yet unlit in the distance. Dorothy looked around the crowded living room.

“Well? Don’t just stand there! We need to get those fires out!”

They divided into two groups; Alex and his friends sprinted after Baz whilst Dorothy led her group across the front of the house, her two new additions in tow. The two Japanese men spoke very little English so far, but seemed pleasant enough, and seemed devoted to her after their narrow escape in the diner. All she knew about them were their names – Hiro and Ando – and something to do with saving a cheerleader or something. Probably derivative. The two men ran on ahead of them towards the closest fires, their black suits making them near invisible in the dark night.

In the midst of the pitch black, she could hear groaning... 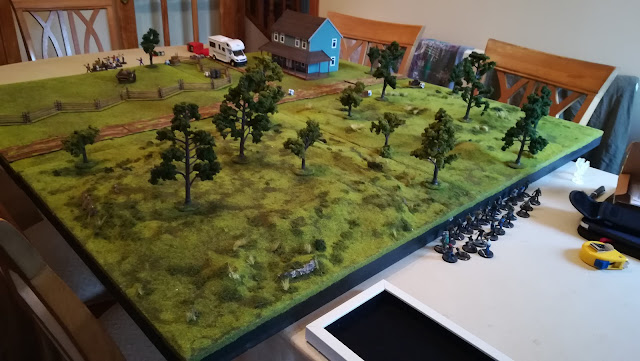 We had set up our table to represent the haven our heroes had headed to at the end of our last adventure.  In this encounter, Baz had decided to set up six bonfires to attract the attention of the undead.  At the start of each turn, Baz would move towards the nearest unlit bonfire or Zed, whichever was closest.  If he could get into base contact with an unlit bonfire, he would set it alight.  At the start of each turn, each lit bonfire would generate D3 Zeds.  Our heroes would seek to get into base contact with the bonfire.  If they could spend a turn next to it without being distracted by Zeds, they would be able to put it out.  We began with all six bonfires lit.  An unlit cart filled with barrels would be the next target of his pyromania.  We thought it would be a difficult scenario, but manageable.  This story, again narrated by Andrew, tells the tale of how wrong we were... 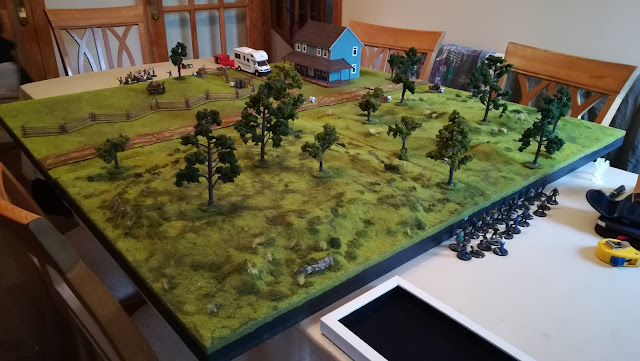 And to think it all looked as innocent as this to begin with... 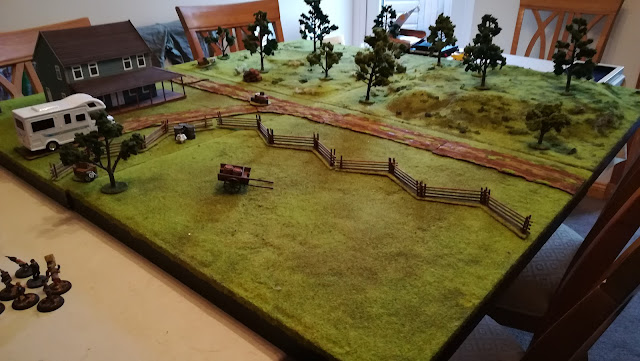 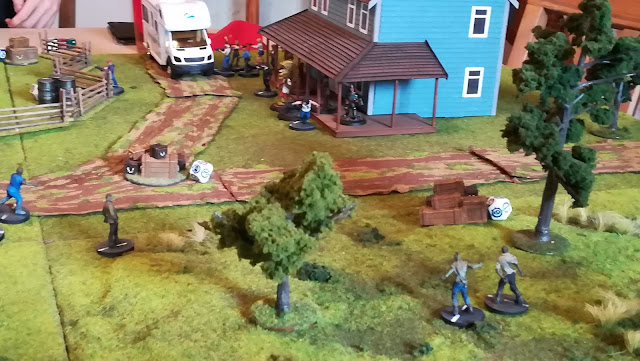 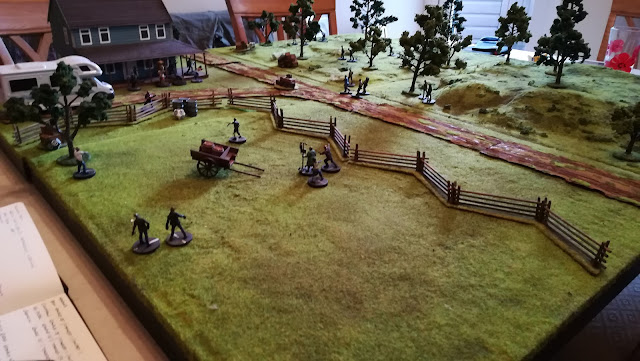 “Baz, you idiot! Will you get back here?” Alex snapped after the retreating figure. Lara and JV had split off to try and douse more of the bonfires, leaving the young cop with Chloe, Roger and Gemma to catch Baz. In the darkness, he could barely make out shambling forms, drawing closer every moment. 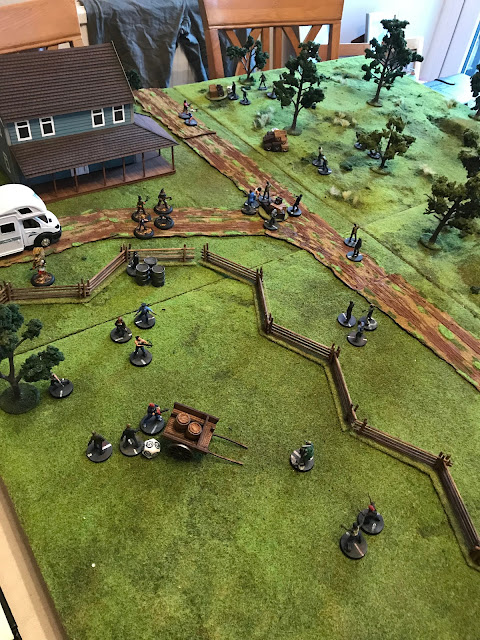 Baz had seen them too. With a triumphant laugh, he revved up his chainsaw and charged, a horrible splattering noise indicating that he had reached the closest Zeds. Gemma was scanning the skies.

“What are you looking for?” Chloe asked, somewhat confused. Alex ignored them both, already taking a step back as he saw the true numbers of Zeds starting to draw close.

“I think we’re too late,” he admitted, watching as too many of the walking dead for them to fight and live looming from the shadows. 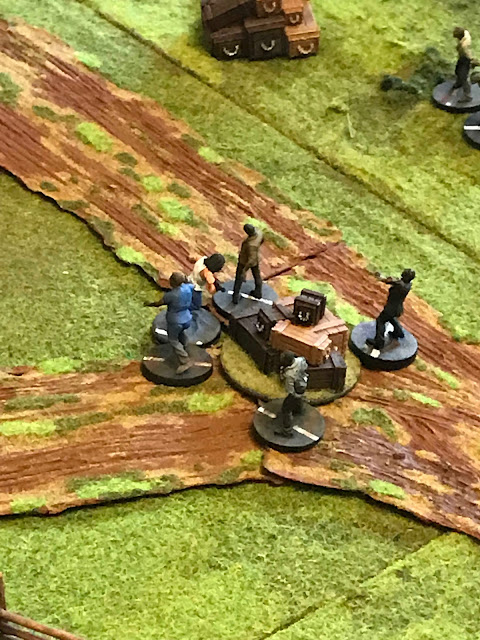 Andy was almost done with his bonfire, breaking the stack apart and stomping the still young flames out with his boots. He could hear the moaning in the dark, drawing closer every second. Worse, as the flames died out around him, he could see less and less. The young woman was calling out somewhere behind him.

How did you say “almost done” in English?

He stomped down on the last of the flames. Something moved.

A flame charred Zed reared up out of the debris, blackened hands reaching for Ando’s throat. Drawn by the noise, others were upon him in moments.

Screams of agony had no language barrier. 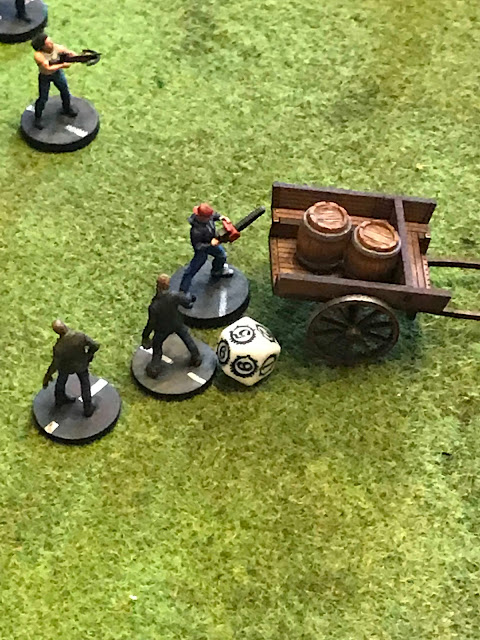 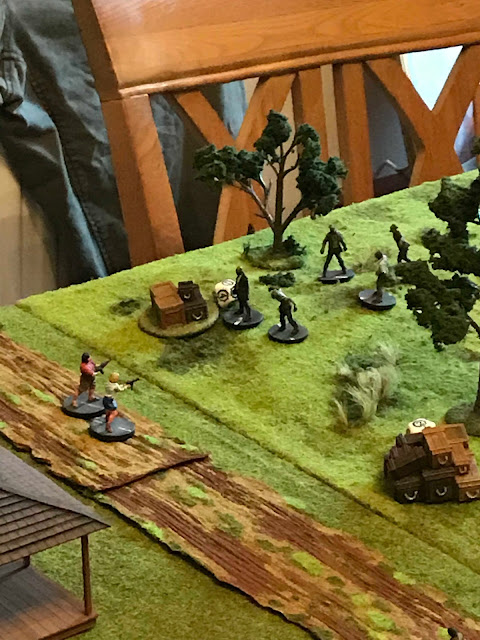 They all heard it. A sudden yelp of panic followed by shrieks, tearing and snarling. The sight was lost to the night, but they heard every moment of his slow, terrible death. It was far closer than they had expected. Swallowing, Dorothy turned to her gang and nodded towards the camper van.

As one, they legged it, Lara and JV not far behind. The rest of Alex’s group were already scrambling inside, the cop waiting for the others before he boarded himself. The Zeds were in sight now, a slow, staggering horde drawing close on all sides. She paused by the door, turning to Alex. 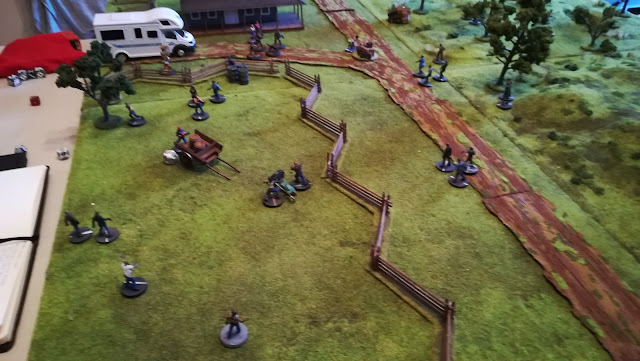 The young Japanese man was huddled behind a set of barrels, staring wordlessly at the remains of his friend as the coming dawn gave new light to the grisly scene. The dead were everywhere now, and soon he would join Ando again. Very soon…

His name. He looked up. The blue-shirted police officer was standing over him, a hand outstretched.

He wanted to go. Without Ando. No, better to stay…better to die.

“Hiro!” The officer looked him in the eye, “What did you say to me before? Save the cheerleader!”

Save the cheerleader. Oh, yes. There was still something left for him to do. He had forgotten that. Looking up, he reached out and took the offered hand. 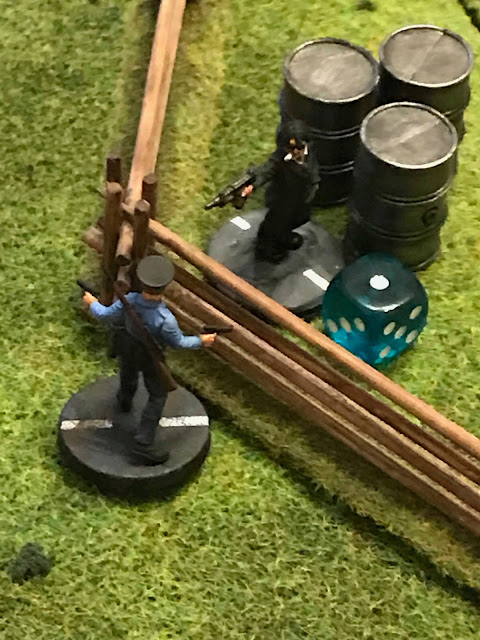 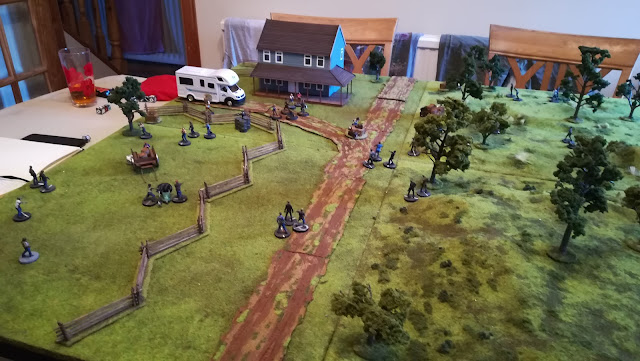 The van was almost surrounded when they returned, leaping aboard as Roger started the engine. The Zeds advanced closer…and then paused, distracted by a large black helicopter circling overhead. Gemma smiled. 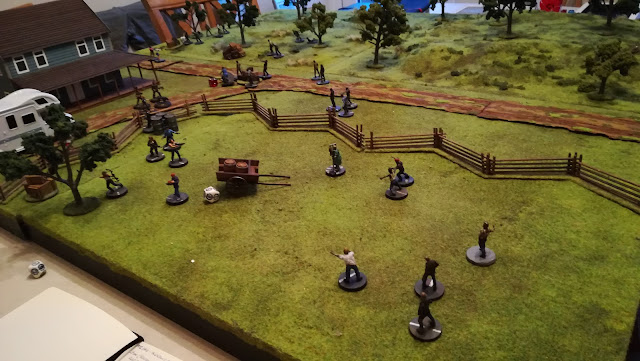 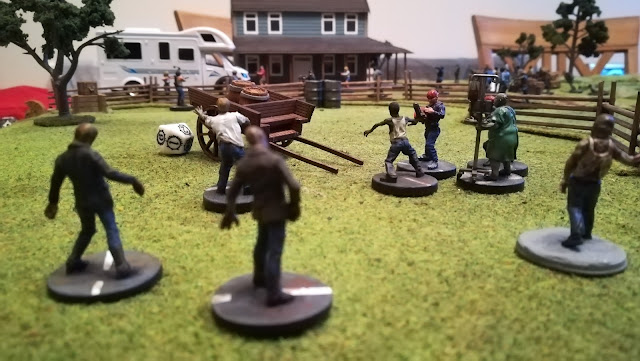 Roger, for once, was quick to take advantage. Gunning the accelerator, he took off down the track towards freedom, leaving only the dead behind.

High above, the helicopter followed. 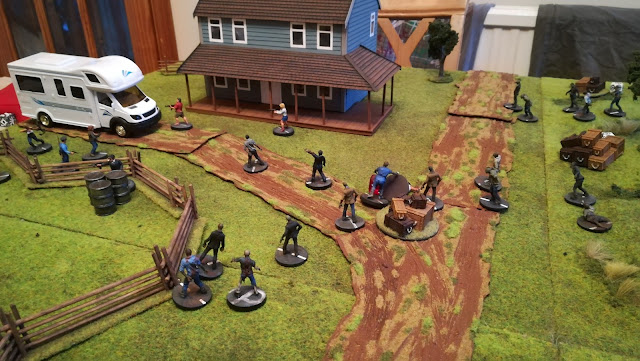 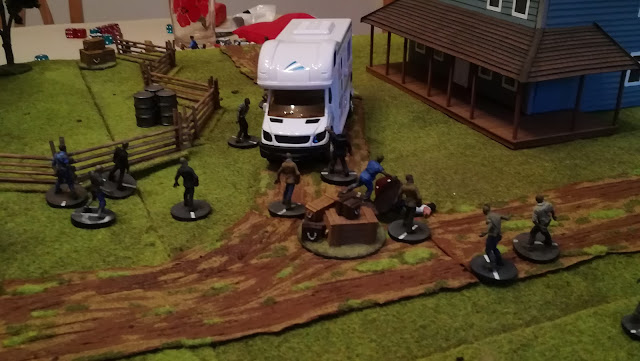 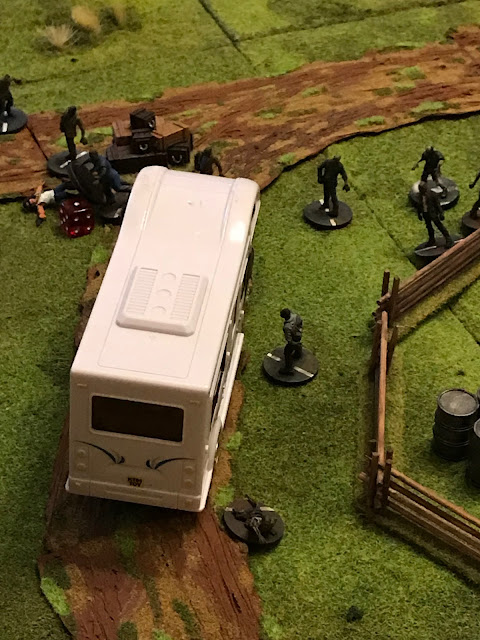 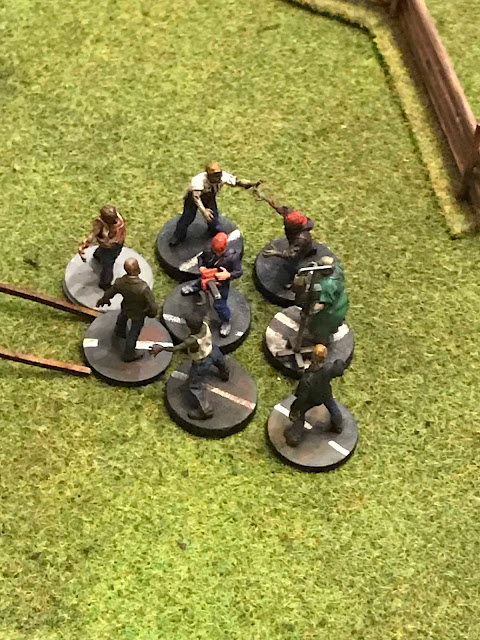 He was up to his knees in corpses, more Zeds approaching with every swing. He felt no fear. He was fulfilling his purpose. There were fewer Zeds than there had been the day before. All thanks to him.

A Zed grasped at his arm and he turned, striking it down with his chainsaw. Fingers clawed at his legs and he stabbed down into the mass, spraying himself with blood. He chanted as he killed, doing the work of the unworthy, those who had fled rather than fight. They could not run forever. They would never understand the clarity of the Cult.

Too many hands. Pulling him down into the mass of bodies. Still he swung, still he fought, still he chanted, still… 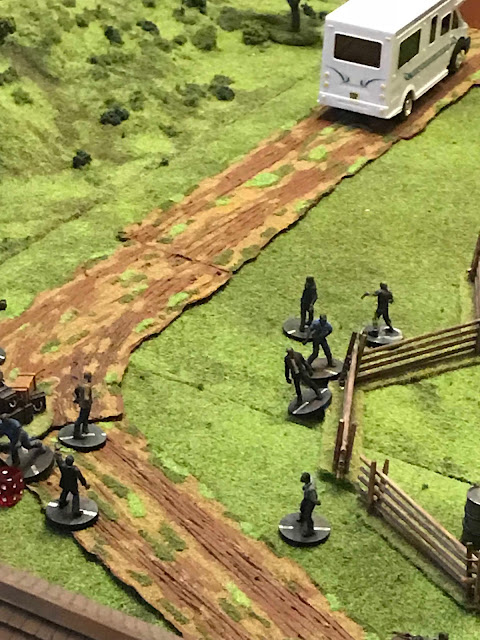