ATZ FFO: Get Ready for the Apocalypse!

With only a few days to go to the launch of our All Things Zombie: Final Fade Out campaign, I thought I'd introduce you to the two gangs we'll be using.  We're playing the campaign in co-op mode. This will help me introduce Andrew to the game system as well as hopefully give us a fighting chance of making it through the campaign!

Now, if you've seen the original series of games I played with Derek a few years back, you'll no doubt recognise a couple of the figures Andrew will be using.  But if this is all new to you and you're not sure why the hype about this is so real, please have a look here where you will find the links to every episode of that monumental campaign.  It's well worth a read.

First up, it's Andrew's gang.  He's using some of my Wargames Factory Survivors.  This is before they were bought out and repackaged by Warlord Games.  I'll let Andrew describe his group in his own words... 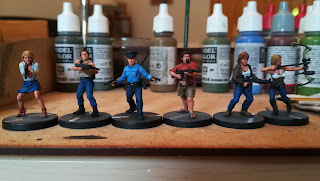 Alex (Star / Policeman / Rep 5 / Pep 4 / Sav 3 / Free Spirit / Born Leader /  2 Pistols & Rifle)
Freshly home from the police academy and on his first day in the force, all Alex wanted was a quiet day one followed by a reunion camping night with some of his old schoolmates. But no sooner had the shift begun than the walking dead decided to show up in great numbers! Unable to warn his mates in the woods due to dodgy WiFi, Alex grabbed any weapons not bolted down and the first police car he could find the keys to and legged it out into the countryside. Here’s hoping he remembered the ammo...

Lara (Citizen, Rep 4 / Pep 3 / Sav 2 / Brawler / BAMP, Pistol, Knives)
Decidedly not of the Croft variety. Even though she does like a good pistol. Pleasant on the outside but years of waitressing in some of the more seedy bars in town have gifted her with the skills to easily batter someone round the head with whatever item comes to hand. There may or may not have been “a thing” back in high school but nobody talks about that. Much.

JV (Citizen / Rep 4 / Pep 3 / Sav 2 / Free Spirit / Assault Rifle & Pistol)
Alex’s best friend from high school, newly returned from NYADA and eagerly awaiting his big break. Which may or may not occur now that the Zeds have taken over and nobody is all that bothered about watching movies anymore. Maybe a running documentary on the zombie apocalypse will send him to the big time if anyone is left to watch it.

Chloe (Citizen / Rep 4 / Pep 3 / Sav 2 / Medic / Assault Rifle & Pistol)
Fresh from graduating med school, back in town with a college boyfriend in tow. Always looking out for others which will almost certainly get her in trouble when the line between staying alive and keeping others alive starts getting blurred.

Roger (Citizen / Rep 4 / Pep 2 / Sav 3 / Poser / Crossbow & Pistol)
The others haven’t really met Roger yet. All they know is he went to med school with Chloe, is extremely rich (for all the good that might do now) and generally considers himself a good shot. Down by the lake, he finally got round to proposing and Chloe accepted. What could go wrong?

Gemma (Citizen / Rep 3 / Pep 1 / Sav 2 / Greedy / Bow & Pistol)
No one is really sure where Gemma came from. She’s not really from around here but pitched her tent in the same campsite. For now, she’s keeping to herself, but when the zeds start to close in, new friendships might have to be made in a hurry! 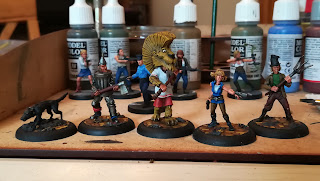 As for myself, I have the enormous joy of being able to field a beautiful set of models from Studio Miniatures.  I painted these a few years ago and have never had a chance to use them.  Final Fade Out seems like an excellent opportunity to bring them to the gaming table.  Plus, I get to pay homage to the classic 1939 film in the names of my gang members

Dorothy's Gang is made up of a group of friends from High School along with Toto her trusty hound of dubious pedigree.  If it hadn't been for Saturday morning detentions they never would have met.  But somewhere between the bravado and the heartache, this breakfast club assembly of jocks and misfits put the attitude aside and forged the kind of friendships that might just get them through the apocalypse. Thankfully, they all have sidearms hidden in their costumes.  Well, apart from Dorothy herself.  Now the apocalypse has struck and ruined her Burger and Fries she sees no need to conceal her pistols any more.

(If you know anything of the rules for this edition of All Things Zombie I'm sure you'll appreciate the references to the classic Wizard of Oz film of 1939 we've thrown in there!)