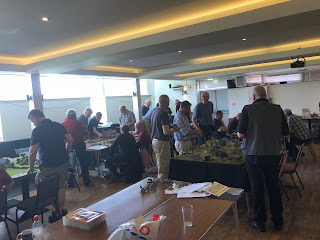 I consider myself incredibly lucky and blessed to have been invited to Deep Fried Lard which took place last Saturday in Musselburgh. That's me in the picture above, in the black shirt, sat at the table enjoying my first game which I'll come to in a moment. It was a fantastic day of gaming with like-minded gents who appreciate the quality of the Lardy games. It was great to learn from them and let some of their experience soak in as I played.

On a personal level, it was also especially great to meet some wonderful people I've been friends with on various social media platforms, even if they look nothing like their profile pictures! I also had the opportunity of making new friends.

There were some cracking games on display. As you'll probably know from this blog, I love making scenery. I've picked up some great ideas on this trip. But I was blown away by this table. I present a photo of a James Bond scenario using Chain of Command. 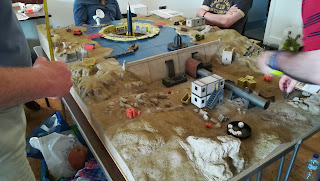 Sharp Practice had also gone back into the Renaissance with this lovely table. 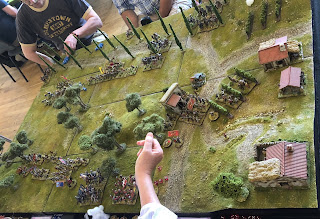 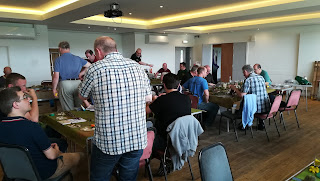 Meanwhile, the Spanish were getting their own back on Napoleon's forces. 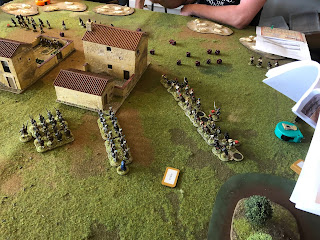 When I arrived Richard Clark himself was in full swing as Ernst Barkmann leading a game of What a Tanker! 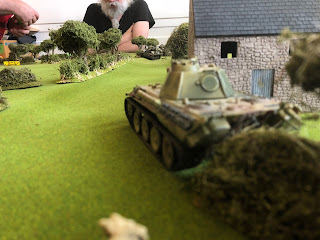 And as the day wore on, the tanks might have shrank, but the brilliance that is What a Tanker! continued! 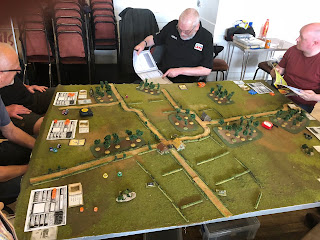 Meanwhile in a corner of Lardiest Africa, something colonial was definitely going on... 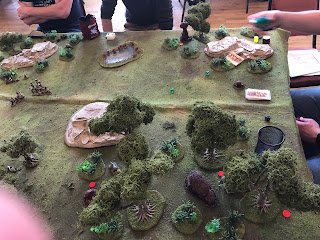 Coastal Patrol from the 2011 Summer Special was being played on a table I would later use for my first ever game of Chain of Command (without the water of course!) 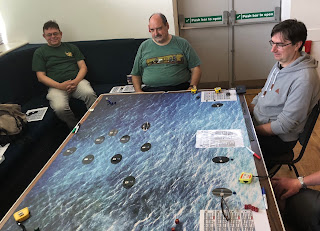 When I arrived I was given a warm welcome by Derek who checked his notes and introduced me to Allan who in turn transported me to a corner of the North West Frontier of Afghanistan known as the Jackzi Pass. 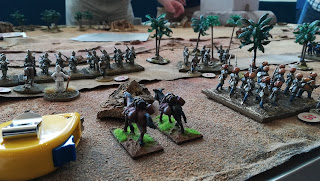 Following extensive reconnaissance, the British forces had learned that Lady Myarse had fallen into the evil clutches of Randi Gitt, the Khasi of Jacksi and his faithful follower Raz Mitaz. Her husband, Sir Roger Myarse was beside himself at the thought of his wife being taken up the Jacksi Pass by Randi Gitt. 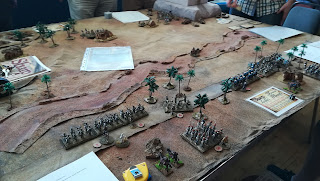 Allan put on a wonderful game. I teamed up with another Stuart and we chose to play the British. 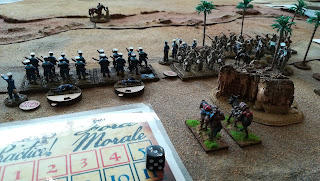 Things didn't go quite according to plan. My movement rolls were rubbish, but my shooting rolls (though few and far between) were better. Sadly most of my Leader cards kept hiding behind the Tiffin, which meant Stuart had to bear the brunt of the action. 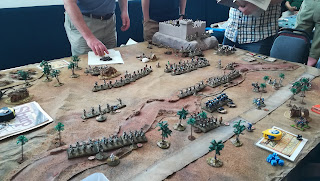 The Afghan troops kept off the table for a number of turns while Sir Roger berated Major Keene's unwillingness to get in on the action. 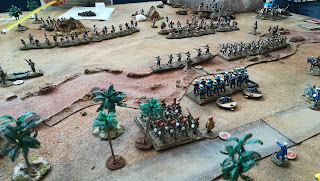 It wasn't too long until Lady Myarse's bloomers were flying from the Fort's flagpole. 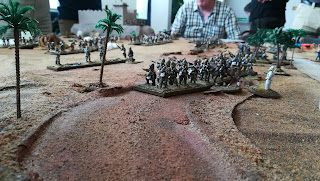 However, we appeared to be able to hold up enough of Randi Gitt's men. Some high dice rolls meant the ever-resourceful Lady had managed to get a rope and lower herself and her maid down the back of the Fort and into no man's land. Quite how she got back to berate her husband we shall never know, for our game had run over somewhat and I had to give my thanks for a truly wonderful game and head over to another table. 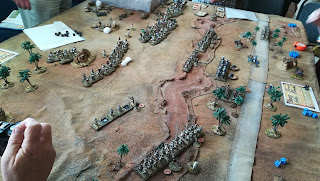 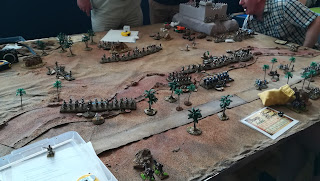 My second game was an introduction to Chain of Command which John Ewing had very kindly put on for me. (How awesome and humbling is that?) We played and Early War scenario as the Germans were pushing into Boulogne. Between them and their target was a platoon of French Infantry. 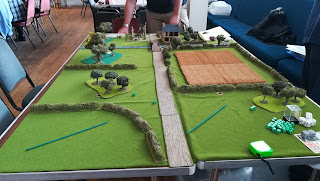 On this occasion, I was working with Tom. We were both up against Andy. I couldn't have found a nicer group of gents to game with for my first ever game of Chain of Command. 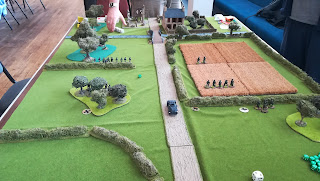 Our Infantry began pushing across the field, sending forward a scouting detachment.  They made full use of the extra cover going on tactical. In response, Andy was managing to roll an incredible number of fives on his command dice.  I think by this point he had two Chain of Command dice and was working his way towards a third.  The only downside for him was an inability to get anything to come onto the table. 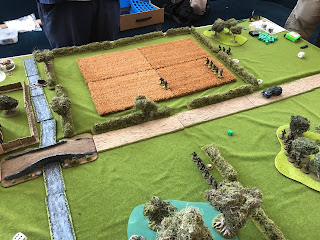 Suddenly a sniper appeared in the farmhouse and held back our advance through the field.  I decided to push forwards with my squads on the left flank.  We'd been sat for a while on overwatch at the hedge.  I had to do something if we were to successfully complete the scenario.  So the command as given and the Germans jumped the hedge.  Lo and behold Andy used one of his now many Chain of Command dice to interrupt my turn.  A squad of French appeared in the woods and proceeded to shoot my squad to ribbons.  All I could do to respond was bring on the rest of the squads. 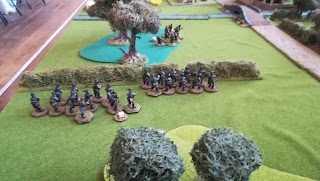 I confess I didn't take many pictures during this game either.  I was having too much fun playing the game and trying to figure out what to do next! 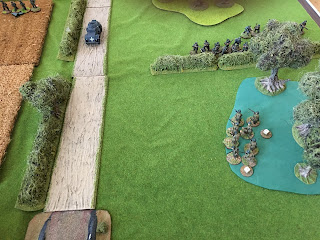 We pushed the squads on the left flank over the hedge led by a Senior Leader.  With a cry of Handgrenaten! We managed to decimate the French after two phases of combat.  The remaining three men bid a hasty retreat.  With the river in our way, one squad provided covering fire while the other dashed across the ford.  They got within 4" of one of the French Jump Off markers.  With no Command Dice, we couldn't close it down.  So when Andy activated the French, they moved the marker out of harm's way whilst the other squad took heavy fire and fled.  And with my usual abysmal dice rolling, our Force Morale dropped to zero and the French were victorious.

I may not have distinguished myself on the field of battle, but I honestly can't remember the last time I had such fun or faced so many command decisions in any game I've played. (Well, except What a Tanker!)

I knew there was something special about Too Fat Lardies' games when I purchased the original Sharp Practice a number of years ago.  Since then I have been blessed to be able to buy copies of a number of their rule sets.  Most are in PDF form, but I currently own If the Lord Spares Us, Terrible Sharp Sword, The Complete Fondler, Dux Britanniarum, Sharp Practice 2, Chain of Command and What a Tanker!  Money has been tight for a number of years, and I've only been able to buy miniatures every now and again.  But I'm now in the very blessed position to have amassed most of the figures I need to begin playing a lot of these games.

What has Deep Fried Lard done for me?  It's let me meet friends from SocialMediaLand who have so graciously encouraged and advised me in the last few years as I began putting my plans together.  I've met new people and made new friends.  I've played games which so far I have only been able to dream of happening one day in the dim and distant future.  And I'm more convinced than ever that when it comes to historical gaming, Too Fat Lardies' rules are the way to go.

Thank you so, so much Derek, John, Allan, Andy, Tom, Stuart and all at Deep Fried Lard who made this newbie feel so welcome and so at home.

Now if you'll excuse me, I have lots of minaitures to make and paint...!