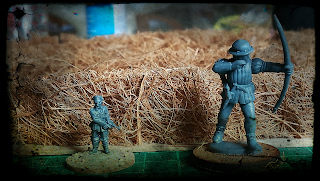 Confession time.  I've been gaming for more than thirty years, but I have no actual hedges.  To be honest, I've always used lichen and seemed to get away with it.  I have a large bag of the stuff and it's served me well for many years.  I've never felt the need to base it or even flock it.  It's been a versatile and useful tool in many a layout. It's also easy to pack away as it goes right back into the bag it comes out of.   It'll continue to appear on layouts in the future.  The only downside is that using it in this way creates a very random clump of the stuff.  You're not going to be able to do a really good job of representing more tended hedges.  It's a problem I've been wanting to rectify for a long time.

Whilst out and about this morning, I had an opportunity to pop into the nearest Poundland.  I wanted to see if they had any spray primer for my TT Combat buildings.  This all came about because I have been working on their City Warehouse kit.  I'd spent a lot of money on a primer from B&Q.  Great stuff, but expensive. I had determined to give up and go back to the old method of applying a coat of PVA when lo and behold, Hugh Johnson and Jez Allum alerted me to equally good but way cheaper alternatives.  And I was delighted to see the stuff in Poundland!   I'll be using it for all my future MDF kit builds. 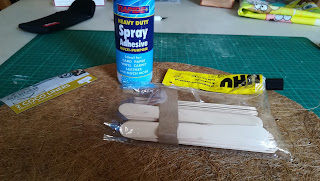 However, it was while wandering around the aforementioned store in search of these spray paints that I came across a bargain that was just too good to be true.  Two 40cm / 16" diameter Coco Liners for £1.  It's the stuff you use to line your hanging baskets because it keeps the soil and the moisture in. And at that moment I knew what I'd spend the day doing!  Hedgerows! Lots of hedgerows!  Of course, I'd need some other equipment to make my hedges.  I knew I still had a heap of jumbo lollipop sticks left.  These would be the bases for my hedges.  I would also need to get some spray adhesive.  Luckily Poundland had a can.  I'll let you work out the price.  Honestly, it was like Christmas!

There are a lot of ways to go about making hedges for your wargaming.  Just about every possible method is detailed in an excellent video by Mel the Terrain Tutor which you can watch here.  I say 'just about' because I'm going to be doing something similar to his rubberised horsehair method.  Of course, the stuff might be called that, but its actually vulcanised coconut fibre.  My method uses coconut fibres from a hanging basket liner (coco liner) teased out to look like the vulcanised stuff.  For a fraction of a price.

Why did I choose this method? Well because I like a hedge you can see through. I'm not a fan of a solid lump. This is why I used lichen for so long. I'm hoping this method will make some realistic looking hedgerows. I feel the effort will be more than justified by the finished effect.

Here's how I began the process.

First up, reference figures.  This is really important.  If you're making any kind of scenery, always have a figure or two to hand to make sure that what you're building looks right for the figures that will appear alongside it.  As you can see in the next photo, I'm deliberately making things hard for myself.  On the left is a 28mm Wars of the Roses archer from Perry Miniatures.  He's accompanied by an Obergefreiter, a German Officer from WWII in 15mm.  I know it looks like I'm undermining my own advice, but bear with me and I'll explain.

I want my hedges to be generic in every sense of the word.  I want them to be usable with both 28mm (my go-to scale for pretty much everything) and with my 15mm FoW plastics (which I'm going to be using with Chain of Command and the newly released What a Tanker! from Too Fat Lardies). I'm aiming for hedges that look good as 4 1/2' hedges for 28mm and equally good as 6-7' hedges in 15mm scale.  Can I also stress I'm not making bocage as it's too narrow a theatre for me?  Plus it wouldn't work across scales.

I began by cutting one of the coco liners in half.  I then cut out a strip about 2cm high and about three centimetres longer than the jumbo lollipop stick I'm using as a base. 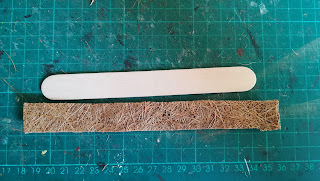 As you can see in the next photo, the coco liner is very thin. 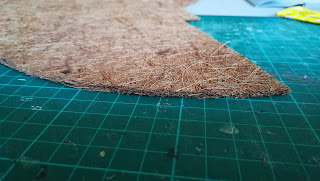 What I did next was to pull the stands apart. Gently. It goes without saying that you also want to make sure you don't rip it to shreds. To do this I would pinch one side and pull it away gently.  You repeat this all down one side and then turn it over and do the same there as well. What you're trying to do is hold most of the lining in the hand that's not doing the pinching and pulling. You're basically looking to 'stretch' it so it's a lot wider than when you started. 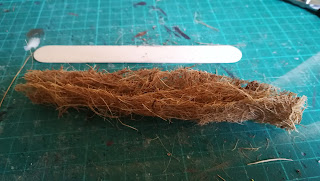 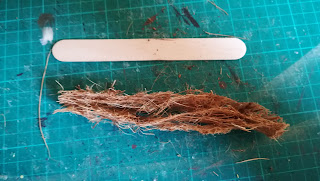 The next thing to do is stick it to the lollipop stick. Again, there's a number of ways to do this. You could use PVA but you'll be holding it in place for a long time waiting for the glue to dry. To save yourself the bother, you could easily use a hot glue gun. I didn't because I don't own one. I'll let that shock sink in for a moment...

So I used my faithful UHU glue. It's multipurpose glue, and it's more than fit for this purpose. It's quick drying and it works really well.

Here are my two models to show you how the height looks at 28mm and 15mm scales. 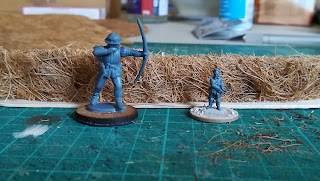 You don't get a lot of waste if you're careful. 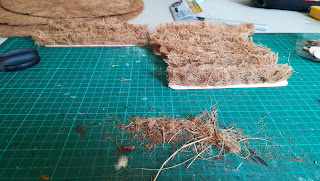 It takes a bit of time to do this, but you can gradually see the hedges taking shape. 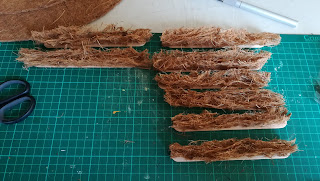 As you can see, you can get sixteen jumbo lollipop sticks of hedge from half a coco liner. 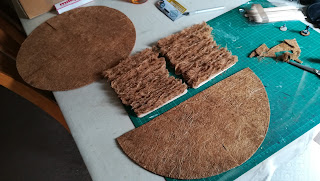 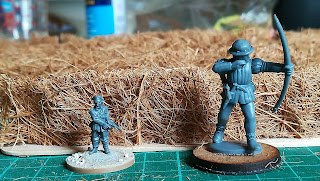 I was just loving the process of making them... 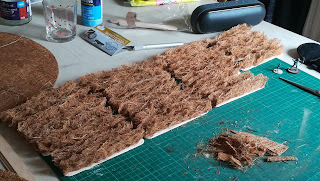 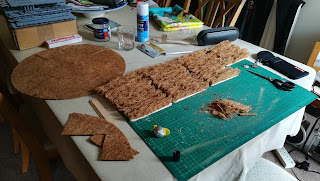 In actual fact, I completed 32 sticks of hedgerow and still had a little left over as you can see in the next photo. 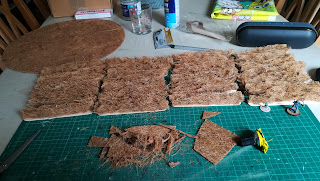 I had three lollipop sticks left over, so I decided to put them to good use with my offcuts. 35 sections of hedgerow make a total length of 17' 6". It also ruins the maths above, as £3.40 now has the potential to make 70 sections or 35' of hedgerow.

Anyway, that's all I had time for today. I had a great time working on them and it's great to be able to sit back and see the fruit of my labours. Next time I'll show you how I flock them and finish them ready for gaming. I'd happily make use of the other coco liner, but I'll need to buy more sticks first!