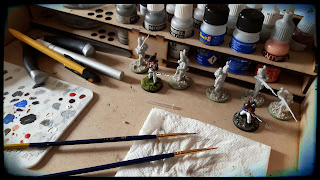 If I may be so bold as to make an observation, I think our hobby is divided into two groups of gamers.  There are gamers who paint, and there are painters who game.  I'm definitely one of the latter.  I love the whole process of assembling and painting my miniatures.  It's not a chore to me.  It's not an obstacle to getting in a game.  For me at least, gaming is the icing on the cake.  It's the chance to get to play with the lovely models I've lavished time and effort on. 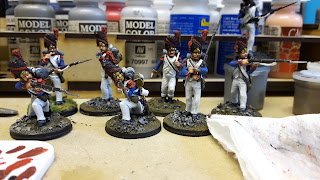 You see, the roots of my wargaming probably go back into my childhood.  Every school holiday I was given a 1/72 WWII plane to make and paint.  I have no idea howm many ME109's and 110's, Hurricane's and Spitfire's I assembled.  Plus the odd Mustang And I loved it.  I stunk up the house with the smell of enamel paints and turps.  Of course, there was a problem.  Once they were made, all that was left was to suspend them from my bedroom ceiling.  That was it.  They looked nice, but the time to play was over. 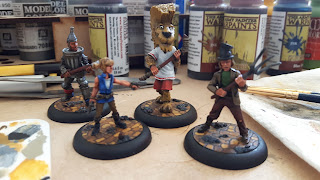 Wargaming changed all that for me.  Awesome models in so many periods and milieus.  Plus, I could work on making model terrain for them all to sit on. And it's been a wonderful hobby for me ever since! 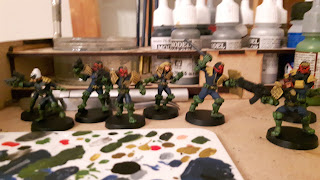 I'm no award winner when it comes to painting.  I'm far from Golden Daemon standard.  I'm not some awesome painter people pay loads of money to paint their models from them.  This is probably a good thing, because I'm not exactly the fastest painter around by any stretch of the imagination.  Calling myself a painter who games isn't some ridiculous and unfounded boast in my painting ability.  Rather, it defines how I approach my hobby.  For me, it's the visual spectacle.  It's being drawn into the story the miniatures are telling you n the games table.  It's about being drawn into the gaming surface.  When this happens, you're no longer some Zeus-like deity with little men as your pawns at your fingertips. No, you drop your shoulders, focus your vision and get down eye-to-eye with your little metal and plastic men and experience the game from their perspective. 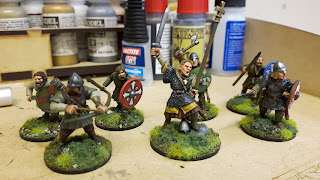 This is probably what draws me to the games of Too Fat Lardies, Two Hour Wargames and The Ministry of Gentlemanly Warfare in particular.  I want to see the story in the game.  What I can't decide is whether this is the reason why I like skirmish gaming, or whether that's just because I take so long to get my forces painted? 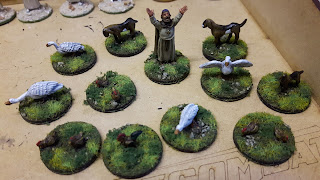 Well, simply, because I'm struggling a bit.  Or a lot.  I can't quite decide which. 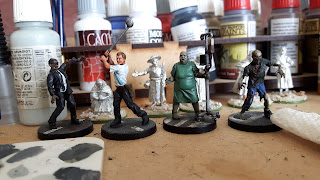 What's gotten me to this situation is the introduction of a new scale.  I've recently taken the plunge into 15mm, repurposing my unused and unassembled FoW minis for too Fat Lardies' Chain of Command.  Normally I like a challenge.  But this has got me stumped. 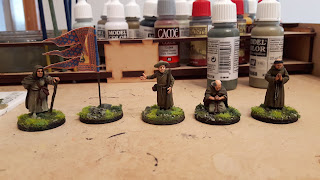 I've spent ages painting two of them.  I've been getting frustrated by the lack of detail on them compared to a 28mm scale miniature.  I've become increasingly irritated by the way what I paint isn't readable at this scale.  And frankly, I'm worried.  I'm worried that I won't want to look at them too closely.  Worried that I'll want to keep them at more than arm's length, which is not like me at all. 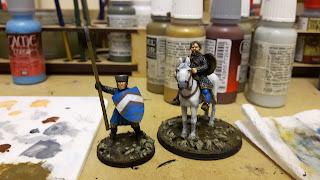 You see, there are clearly compromises you have to make in sculpting at this scale.  And that translates to the painting too.  I can see the benefit of 15mm in terms of gaming. I see how much easier it is to store an army, let alone how much scenery you can put on a table.  It makes sense from a gaming perspective. I get it completely. 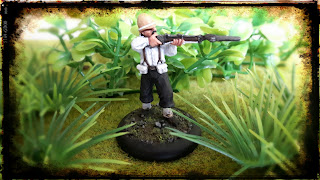 But I don't get the painting.  At all.  For all the effort I put in, the model didn't 'read' when I looked at it.  I couldn't see enough definition.  I liked my shading, but it was completely lost when I looked at it from more than 6" away.  So I decided the only way to add definition was to apply a black wash.  And I wasn't comfortable with that at all.  I've struggled with it for almost a week now.  I couldn't shake the fact that it seemed to take me back to the painting method in the 80's.  if you were around then, you'll remember that it boiled down to leaving a line of black undercoat showing between the parts of the model to 'define' it.  The argument back then was it gave the model more definition when viewed on the table.  And that idea takes me back to the Zeus-like scenario I described earlier.   And I'm not sure that this kind of result would draw my eye to what's going on at ground level. 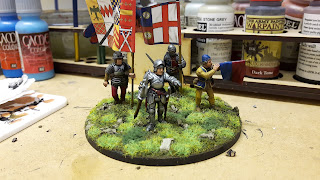 But then again, at this rate, the project was going to crash and burn.  Maybe I was overthinking things.  Maybe I should have found a job making scale model displays for museums.  Or maybe as a forty-something gamer I've become so set in my way that there's no chance of changing to a smaller scale.  Maybe I'm too used to worrying about levels of detail in my painting that you can't do in the same way on a smaller scale.

So I took the plunge, painted the rest of one of the models and applied a black wash over the model.  I didn't particularly enjoy the process (which is a major stumbling block for me).  But the end result is better than I thought it would be.  The extra depth the wash creates helps my eye read the model.  I set it aside to dry and continued with this post. And, against all expectation, I've found myself lowering my shoulders a few times, focusing my sight on the model on my paint station.  It's about four feet away.  Could it be it's actually working? Once it's dry, and before I post this, I'll add a photo of it here. 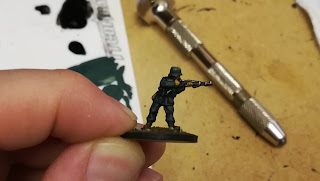 The pictures aren't brilliant.  I can't seem to get the lighting right. 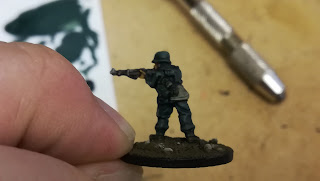 So maybe the secret of painting 15mm is to be less subtle than you are at 15mm.  Maybe you need to force the shadows more strongly.  Maybe I could get this done a lot faster, and a lot happier, by batch painting a team or section at a time.  Perhaps the secret to success at this scale is applying base layers, adding a highlight and then applying a liberal black wash over it all to add definition.  I can't expect them to be as detailed as a 28mm miniature.  But I don't see the point of giving up and wasting the money that was spent on these miniatures.

But it won't turn me away from 28mm where my forty-something heart clearly loves to be.  Which reminds me, I have Perry Miniature's Deutsche Afrikakorps and British 8th Army figures I need to assemble.  And of course, they have just announced that they will be releasing some US Infantrymen suitable for the Mediterranian theatre later this year.  The DAK suddenly have two theatres I can use them in...

Whatever happens, the future is bright for gaming the Second World War with Too Fat Lardies' excellent Chain of Command rules!

As usual, thanks for stopping by.  Please feel free to add any constructive comments below, especially if you can give some advice o help me along!