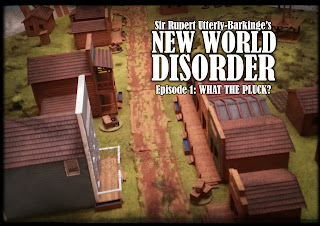 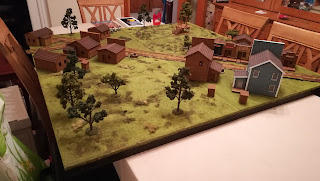 This was the first of our games of In Her Majesty's Name.  We've decided to play a series of linked games rather than a formal campaign because we wanted the games themselves to drive a progressive narrative of events.  This will allow our main protagonists to miraculously revive between games, much like the heroes of those old cinema serials of old. Pulpy perhaps, but it's the way we decided to roll on this one. Our first game is 9.1.2 Bring Him Back Alive which we played without any additional complications.  You can see the terrain layout in the next few photos. 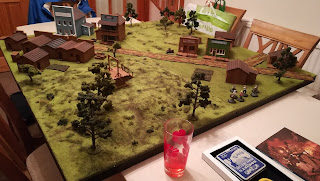 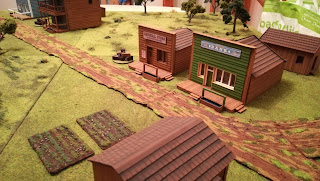 Dirk Beauregard was waiting for them in the middle of the board on that nice new set of dirt roads I'd made recently.  (You can read all about it here).    Sir Rupert and his company set up in a clump in the middle of one table edge. 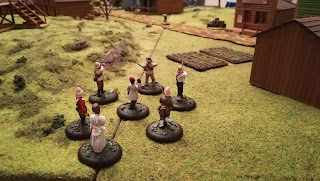 And the Black Dragon Tong set up in a rather worrying clump opposite.  At their centre stood a Yeti. 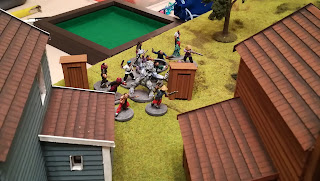 Both sides began to advance towards each other.  Sir Rupert nodded to his faithful manservant Goonda who moved on ahead, assured of protection from Sir Rupert's Hunting Rifle. 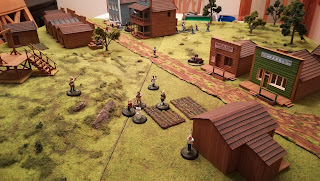 Before they knew what was happening, the Dragon Warrior led a group of Tong round the side of the gun store. 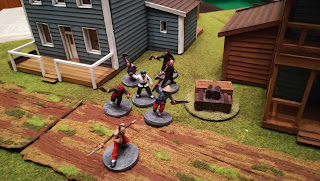 Master Wu-Jen and The Dragon Lady were taking the more direct route with the Yeti in tow. 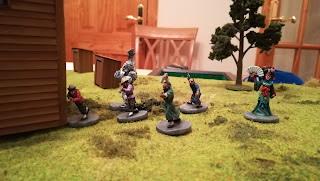 It wasn't looking great for Dirk. 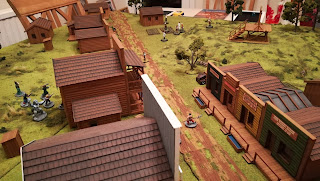 Goonda was well on his way to meet him, whilst the others took up a more cautious advance so they could make full use of their firepower.  They were clearly outnumbered by the Tong.  As military and hunting rifles began to fire, it was clear that some strange magic was at work. 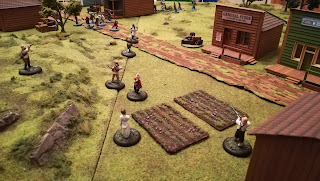 Shot after shot found their mark, but nothing was slowing their enemy down.  Pluck roll after pluck roll was being passed.  Even 8+ rolls were being made. 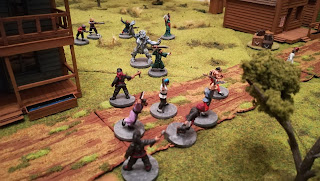 Master Wu-Jen appeared to be impervious to all fire.  Each shot hit.  Not one shot took him down. 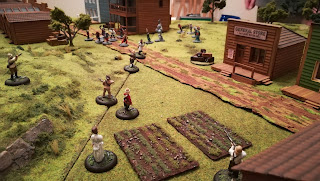 Bullets that would normally take down an elephant (and coincidentally the odd T-Rex, Stegosaurus and Triceratops if "With Steamboat and Rifle" is to be believed) bounced harmlessly off the Yeti.  Sir Rupert's mood was not lightening any... 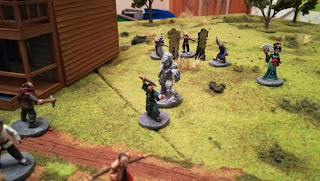 Two boxers replied with their muskets, allowing us to use those lovely perspex smoke markers.  Both shots missed. 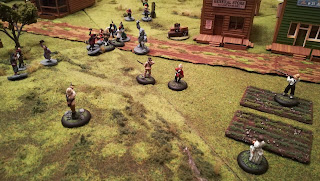 Suddenly Goonda and Dirk Beauregard were surrounded by Tong and the Yeti was bearing down on Sir Rupert.  Paying no heed to the threat, Sir Rupert made full use of his Hunting skill and fired at one of Goonda's assailants.  The target went down.  Meanwhile, Count Otto von Wahnbildt levelled his hunting rifle, took steady aim and fired.  Once again his aim was true, but the bullet did nothing to slow the beast down, let alone fell it.  Major Payne fired at it.  So too did Sergeant Reynolds.  Every Pluck roll was passed.  Honestly, our games are normally marked by my bad dice rolls.  Now it appeared that Derek's rolls were becoming nothing short of miraculous! 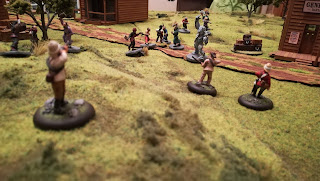 And then the terrible happened.  Goonda was hit.  He failed his Pluck roll and fell to the ground, clutching at his skull.  The Tong overpowered Dirk Beauregard and began to drag him away.  The Yeti stood where he was, roaring and beating his chest.  The Dragon Lady shouted something unintelligible, which, if an untrained ear were to try and replicate, would sound mildly racist.  In response, the Yeti snorted his disdain for Sir Rupert.  Sir Rupert curled his lip in contempt.  And with that, the Yeti turned and loped away.

Goonda was okay.  A little dizzy, but okay.  As Sir Rupert helped him to his feet, he noticed a small folded piece of paper in a groove in the track.  Retrieving it, he opened it out and read five words that had been hastily written on it.  "Small box. Desk. Wurts Ranch"  Dirk had left them a clue.

It was the only lead they had...
Labels: 28mm Skirmish Wargaming In Her Majesty's Name Sir Rupert Utterley-Barkinge Sir Rupert's New World Disorder Steampunk The Ministry of Gentlemanly Warfare Victorian Science Fiction