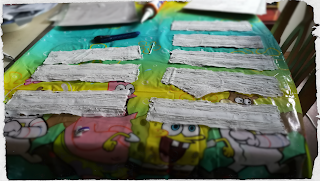 A huge, sincere thank you to everyone for your kind comments and interest in my dirt road project!  I've been blown away by the interest this little build has generated.  And whilst my time has been short due to work commitments, I want to share how my work has fared and pass on a few observations if you want to have a go at this method for yourself.  I'll be painting and flocking them over the weekend, so there'll be a third post to come with the finished scenery items.  If you missed the first part of this project you can view it here. 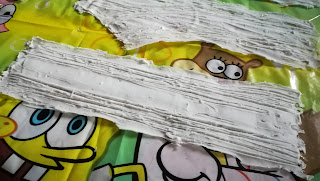 First up though, is I have to say that THEY HAVE WORKED!!!!! Sorry to have had my reservations Brian.  I didn't doubt what you had achieved.  What I doubted was whether I could achieve it, let alone whether it would be as good as I had hoped they would be.  Can I just say, THEY ARE AWESOME!!!!!!

I wrote in my first post that I had been concerned that I had spread the caulk too thinly.  I needn't have worried.  They are tin. This in no way weakens their structural integrity.  There is clearly no longer any need for me to worry about having dirt roads that sit 5mm or higher above aagaming surface.  These things are fantastic! And this is just too brilliant to find words to explain!  If you don't believe me, have a look at the next photo.  The MDF base you can see is 25mm in diameter and is 2mm deep.  I have no idea how thick these dirt road sections are, but clearly it's a lot less than 2mm! How great is that?!?!?! 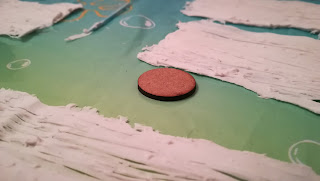 I did make some sections thicker than others, for fear I had spread them too thin. Almost all of the sectionss  regardless of the thickness,  still wanted to stick to the food bags in the odd patch along their centre.  I was able to peel them off carefully late last night, more than 24 hours after I had had fun spreading the caulk. This did leave a little marking on the underneath as you can see in the next photo. You can also see that the plastic rucked a little in the spreading process.  This has left some ridges in the underside of some of the pieces.  They aren't visible when turned the right way around, and I have no real idea how to combat this.  I know that you can put water effects straight onto non-stick baking trays (not a good idea if your wife hasn't given you the all clear!).  When dry it can then be peeled off and applied to your scenery.  This is a great way of making a waterfall, but that's not the project at hand so I'll stop going off at a tangent! I only mention this because it would give a guaranteed smooth surface to work your caulk on. 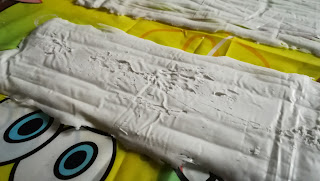 And here's what was left on the food bags... 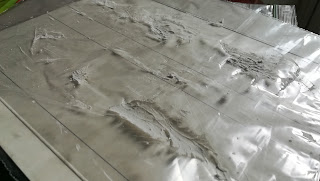 But this is what they look like when they are the right way around! 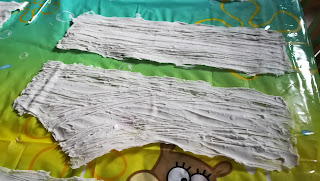 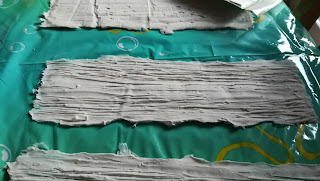 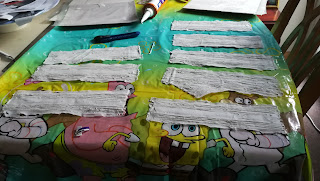 I'm a little concerned about this next one, but am happy to paint it up to see how it fares when flocked. If it's no good it'll get cut to a shorter size. 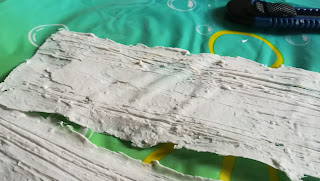 As to whether they are flexible or not, I offer the following photo as evidence...! 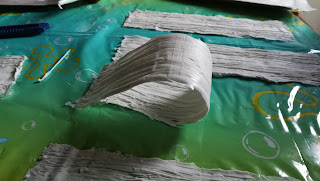 I'll take that as a definite yes!

I scored the sides of the road with my plastic cocktail stick to represent wheel tracks in the soil.  I'm amazed at how well this detail is preserved in the caulk.  with hindsight I wouldn't have pressed as much as I did.  Truth be told, there are a couple of places where I went right through the caulk and there is more of a gap than a deep tread in the road!  However, this can easily be fixed by putting the offending section on the food bag and adding a tiny amount of caulk on top.  Brian says this can be done and I see no reason whatsoever to disagree with him! He's been right about everything so far! 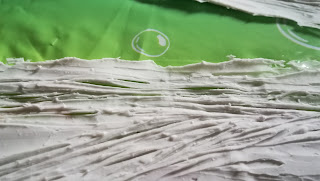 I need to give my sections a trim with a pair of scisors to level up the ends so they can sit together properly, but I'll show you that in my next post when I hope to show you the finished result.

There are other options that I could have followed.  It would have been easy to cut the end of a straw at an angle.  When inserted vertically into the caulk you would then leave the impression of what looks like horse hooves.  The caulk would certainly accept this.  I didn't do it because I didn't think the detail would be kept. Looking at the wheel marks, I can say with some certainty that they most certainly would have. My bad.

You could also add some small talus to the edges of the sections.  I did have the idea in mind.  I even had my trusty base mix tub to hand when I began this process.  However, I think you can see some of the little lumps that appeared when I was scoring the caulk with the cocktail stick.  Whether rightly or wrongly, I decided not to bother with this added haste as the caulk seemed to be giving me some texture as I worked it. Additionally, as I'm making a dirt road, I'm wanting to create the impression of heavy cart wheels digging furrows in the ground. This churns up mud rather than grit.  I'm hoping this will be a visible result when the pieces are complete. I won't know how successful sis have been in achieving this until I I have painted and flocked them.

As I said in my first post, there's many ways to make dirt roads for your layouts.  What I'm doing is just one of them. Am I happy though that I tried this one?  Definitely!  Would I recommend it?  Without a shadow of a doubt.  They have a very low profile for a piece of drop-on terrain which is exactly what I wanted.  What's more, I think they look great.  They are even more flexible than I thought was possible. They will easily conform to the contours of any gaming surface. To my mind at least, this is a humungous thumbs up from me!