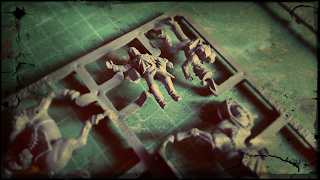 Sharp Practice uses Shock Points to represent the loss of morale and cohesion on individual groups of models.  It can be inflicted by fire, fisticuffs or rapid disordering movement.  Now, the rulebook suggests the use of small, unobtrusive markers such as dice or small stones to keep track of this on the battlefield.  But I've decided to take this one step further.  Well, quite a few steps further, if truth be told.  Here's what I've been up to... 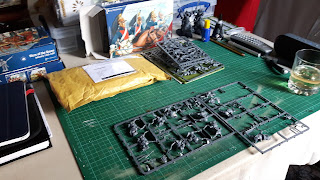 I've wanted to game the Napoleonic Wars for a long time.  Make that a VERY long time.  I wanted to play it in 28mm as I love the level of detail you get on this scale.  This didn't go down very well with wargamers at that time, all of whom seemed to play in 15mm.  I soon came to realise that I didn't have the funds necessary to make this happen, let alone have the time to paint two proper armies.  And as to finding a place large enough to game it all in... Well, it didn't happen, did it?

But then Perry Miniatures started to make plastic sets.  And even though I've never earned a lot of money, I began to make the odd purchase here and there.  Dangerous, as I did so without an army list, let alone rule set to use to temper my purchasing.  Then along came Sharp Practice and the wonderful Compleat Fondler.  Trouble was, it looked like I needed a couple of hundred miniatures to play the scenarios in the book.  And I clearly don't have that many miniatures.  Plus, none of the miniatures I did own were even made. I was worried about basing them incorrectly. So little happened.

Then TooFatLardies released Sharp Practice 2.  This was at probably the lowest point of income I have ever had the privilege to earn.  But this edition made putting together your force a lot easier and required fewer models as well.  I was sold.  But I had to wait a long time until I could afford to buy the PDF.

But boy was the wait worth it!

And now, with a load of figures purchased and ready to go, I'm slowly enjoying putting together my forces.  And this includes Shock Markers.

Now, Perry Miniatures make some lovely casualty figures, but if like me you have some of their French Cavalry boxed sets, you'll realise that the horse frames come with a French and British Infantry casualty on them.  And whilst that would be great for adding to their bases, I thought it would be great to use these to adorn my shock markers! 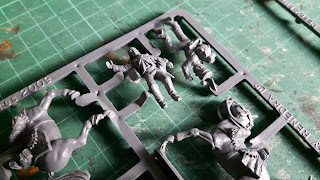 The original and best casualty markers come from Warbase (no, I'm not on a commission, but if they'd like to offer me one, I won't say no!) To fit with my current plans, I need 15 of these  Seven for the British and eight for my French on a ratio of one per group.  They come with wonderful dials that go from 0 to 12.  As you can see in the next photo, I've already cut one British casualty from the frame of Dragoons. 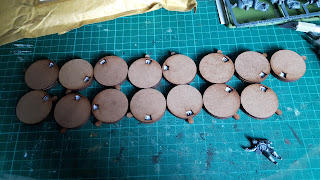 With my casualty glued in place and a few spins of the dial for fun, I stuck a magnetic disc on the bottom.  This will keep it from sliding around in my Really Useful Box. 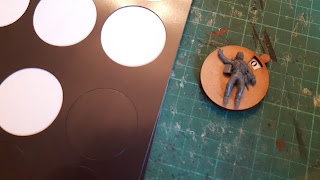 I then applied some strategic blobs of PVA to the base.  You'll note I decided to fill in the window with a blob of Blu-tack.  I'm hoping this will stop any grains of sand from my base mix going into the workings... 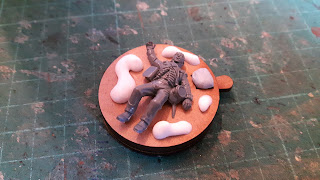 I then took one of my old brushes and pushed the glue about to cover the base.  It was a bit fiddly getting it under the raised knees, but I got there. 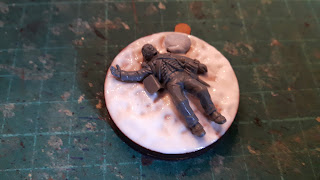 Then I carefully added my base mix.  I have a tub to hold this.  I use roughly 70% sand, 20% ballast and 10% cork chippings.  The sand was purchased from ELC which I don't think even exists anymore.  The ballast is from Woodland Scenics.  The cork chippings are from Hornby. 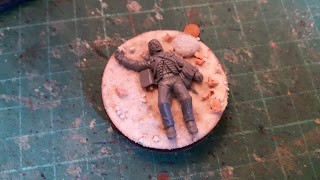 And here's the maker from another angle. 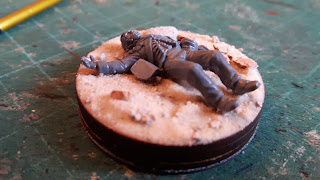 All I can do now is leave it to dry for a few hours before I can begin painting and flocking it!

I should add that I'm going to be gaming in the Spanish Ulcer.  As most of Perry's plastics are designed for gaming the Hundred Days campaign, the French Infantryman casualty has the wrong uniform on for my chosen period.  Not to be beaten, I've purchased a pack of casualties from Perry Miniatures to solve this problem.