Lion Rampant: My Most Productive Build Day Ever! 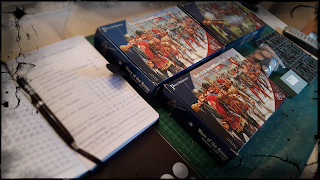 After years of wishing and hoping, I seriously can't believe my eyes! 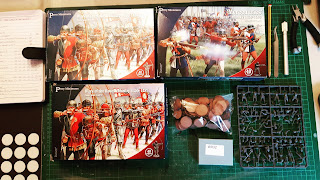 Yes, Wars of the Roses wargaming is actually happening!  And not just in two basic and identical 24 point Retinues for Lion Rampant either!  No!  This is happening just as I always wished it could be, but never expected it to happen.  I've got hand gunners, crossbowmen with pavises and pike from Burgundy no less.  It's an absolute pile of models and all of them from the wonderful Perry twins!  I am so, so blessed to have this much stuff!
So this last Saturday I sat down and began making some of the models.  Now, I have to admit, I'm not quick at this sort of thing.  I like to take my time and try to get natural looking poses.  I like to sit and consider my options, making sure the garments match.  It's a part of the hobby that I often feel is neglected.  It's as if we rush ahead to get them to the table, almost as if the assembly is an annoying obstacle to be overcome.   I couldn't disagree more strenuously.  This is the moment that brings your army to life on the tabletop.  It's the moment that all the planning and saving comes together and your dreams take physical shape before you.  Why would you want to rush this kind of an experience?   I certainly don't.

And that's why I take my time. 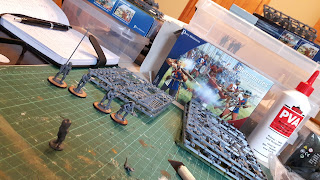 To be perfectly honest, I was utterly amazed that I had managed to make these five men in an hour.  I've never done that before.  Of course, having my black book keeping me right has definitely helped.  It's given focus to my creativity.  I know how much of everything I need to make, and I can, therefore, get stuck in. 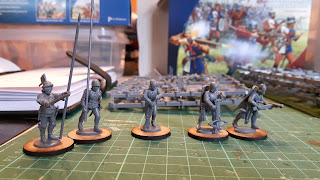 What amazed me was how the pile began to steadily grow.  I wasn't looking at the time.  I was looking at each miniature I was making.  I was in the zone and I was loving it.  There were no deadlines.  All unrealistic goals had been kicked to the horizon.  This was all about enjoying the build and seeing what I could get done. 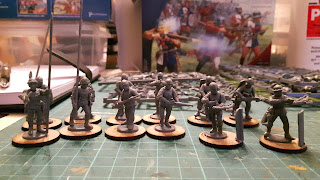 And by the time I had finished, I had completed sixteen models.  Sixteen!  I'd had a chance to begin work on three different units.  I also had time to make one of the Foot Men-at-Arms.  You can see him on the far right of the next photo.  He's clearly been reading his Thalhoffer manual... 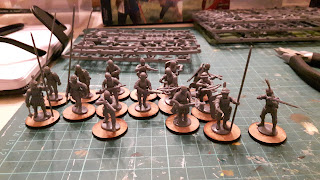 In a little more detail then, here's the first of my crossbowmen from Burgundy. You can see I've modelled some with their pavise on their backs.  Two have their pavises attached to their bases by blu-tac.  I did this to help figure out where to position the miniature on its base. I didn't want to glue it in place permanently just now as I was worried it might get in the way of my brush when it comes to painting the model.  I'll need to cut down some of the spare pikes to give me supporting struts for these.

The unit is led by a standard bearer which you can see on the far right of the group.  The Mercenaries box set comes with some wonderful banners.  It would be a sin not to use them. 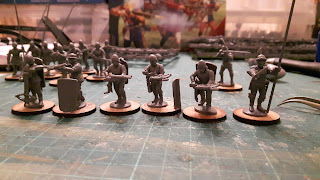 Next up my hand gunners.  I've made five so far.  If you've seen my other recent posts on this project, you'll know that I'm basing my forces on those that fought at the battle of Towton on 29th March 1461.  This was the first time handguns were fired on a British battlefield. 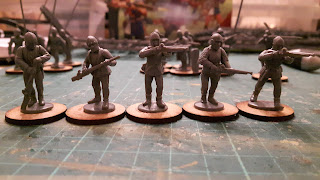 I must confess that I had originally decided to make a dozen of these.  I was going to field them as standard archers at 4 points.  However, I've been having a bit of think about this.  On reflection, I'm going to make two units of Bidowers as I think this more accurately reflects their battlefield role. This isn't a problem, as it uses the same number of models and comes to the same points. This, you will understand, saved some last minute worrying about whether I had enough models!

And finally, I present my first four pikemen, one of whom is a standard bearer.  His inclusion should be well understood by now in light of my earlier comments!

I have encountered a flaw in my planning after making these chaps.  I have sheet steel cut and stuck in place for them in my 4L Really Useful Box.  Trouble is, their pikes are too tall to fit!  At the point of writing this, I haven't deciced to see if there is enough space in the box to let me affix them to the sides instead.  If not, I'll need to get a small box that is tall enough for a dozen models. 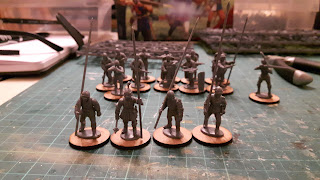 I love these miniatures, and I'm still pinching myself when I look at them.  I can't help think that I must be dreaming to have so much lovely stuff.  It's so much more than I ever thought I could afford to have.  I'm incredibly blessed.