Parking PBP on the Sidelines 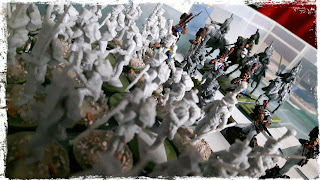 I'm delighted to report that I've been working on my Napoleonics for Sharp Practice 2.  I'd like to claim that I've done all you can see here in the last week or so, but that would be lying.  Whilst the British troops almost exclusively live up to that boast (save for Sharpe!) I'm afraid that cannot be said for the rest of the miniatures.  I've been making the odd model here and there for the last year and a half if I'm completely honest.  What you can see in this post is a record of the story so far. 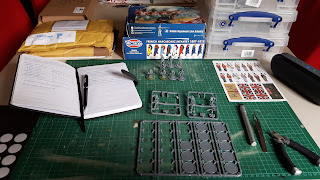 As has been pointed out, I clearly enjoy getting thing organised properly, as you can see in the photo above.  The notebook you can see has proved to be really useful in organising my hobby.  I could say a lot about that,  but I think a separate post would be in order before I go off topic here.  As you can see, my French miniatures are mainly from Victrix with some Perry plastics in the form of my Dragoons.  I've also purchased some of their metal Napoleonic miniatures to complete the force, and I hope to be able to show you some of these in the coming weeks as time permits.  My British force comes from a box of Perry plastics.  I've purchased an extra sprue of the infantry and of riflemen to make up the numbers.  I also have a pack of metal mounted officers to complete the force. 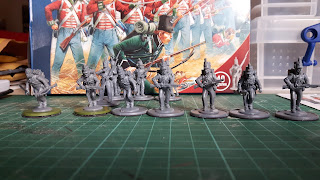 Now I have to admit: I'm not fast when it comes to making my models.  I really enjoy the process of putting them together, looking at combinations of poses and making sure that I remove any mould lines.  Perry Miniatures have hardly any, but I like to make sure before I glue anything together.  Victrix tend to have a little more, and have spindlier parts as well, so they take even longer.  But I really don't mind. I try to enjoy every part of the process of our hobby.  I'm equally happy deciding on rules, determining purchases, assembling, painting and gaming.  I know I can't afford much in these lean times, but if I'm perfectly honest, that just heightens the delight I experience when I can go ahead and buy some of the things I've planned. 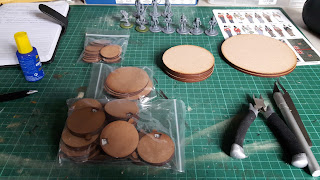 Talking of planning, you can see above that i have been able to purchase a range of bases from Warbases.  In the foreground are the casualty Markers which I will be using to record Shock on my troops.  Expect a separate post on those in the coming weeks!  The two large bases are going to be my primary deployment markers for my two forces.  These will have a diorama on them and yes, you guessed it, you can expect a separate post on them too.  I also have some 80mm diameter bases for secondary deployment points.  The remaining bases are 60mm and 30mm diameter bases.  The 60mm bases will be for my mounted Status III leaders.  The 30mm diameter bases will be for my leaders on foot.  I'm hoping their slightly bigger bases will make them stand out more on the tabletop.

As you can see in the next photo, I use Really Useful Boxes to stope my models.  I attach 20mm square pieces of steel sheet which I cut from sheets I get from Magnetic Displays to the bottom of the boxes.  I can fit eight in a row across the box.  I attached magnets to the bases of my models.  I purchase these from The Fridge Magnet Shop on eBay.  So far I've been able to make 6 95th Rifles to accompany Sharpe, a solitary Light Infantryman and 9 Infantrymen.  I've clearly got a long way to go! 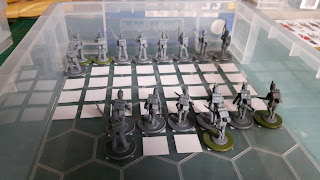 On the other hand, my French are much closer to completion.  I still need to make another four mounted Dragoons.  Four more Infantrymen are needed, as too are the second unit of 8 Grenadiers and two remaining Voltigeurs. if you squint closely enough, you'll see that Victrix changed the colour of their plastic over the years.  Most of those models I have made are from the early days of light grey plastic. 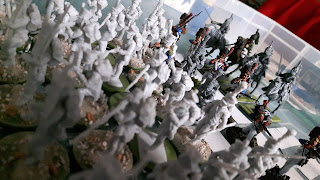 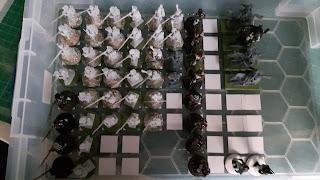 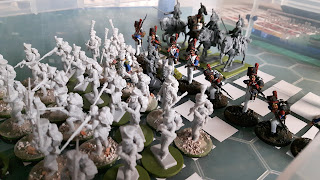