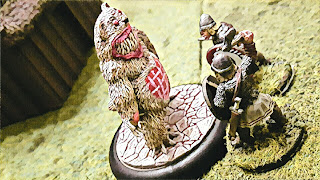 It may have taken the better part of a century of academic scholarship to unearth the exploits of our fated hero Aethelweard in the Doom which bears his name, but there are those who wish he had remained in obscurity. The most vocal proponents of this view cite this early rendering of the Grendel legend as ample proof that the authors were just making it up as they went along. And whilst there are a large number of upright exponents calling for Aethelweard to be given the proper place he deserves in the Anglo-Saxon Chronicle, this account of a somewhat flat and furry Grendel offering anything but warm fuzzies does make one wonder what these scribes were putting in their Mead all those years ago... 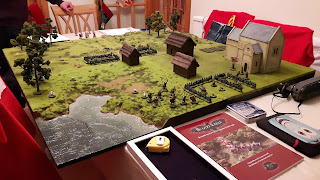 What follows is our attempted refight of scenario 10.1.15 in the Blood Eagle rulebook simply entitled 'Grendel'.   If you own the book (and you should. It's really good) then you'll know that this scenario takes place inside a great Hall.  This is brilliant if you own one with a removable roof. But I don't. I scratch built mine. And I did so for a lesser Thegn. So his isn't big enough anyway, even if the roof did come off. Which it doesn't.

We decided instead that the encounter would happen outdoors. We set up the scenery leaving the 6" radius from the centre point largely free. At the start of the game we would take turns placing our models within 6" of the centre of the board.  A parlay was taking place and our men wore no armour. They were allowed to carry their shields, but this created an uneasy truce. With armour values standing at either 7 without shield or 9 with, the idea of hanging about anywhere near a lumping great angry bear with an FV of +5 and +3 for his claws and two attacks each then seemed...well...frankly suicidal.  At the end of our deployment, the centre of the table looks like this: 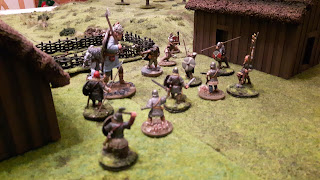 One of the Draugr was clearly intent on helping himself to some chicken... 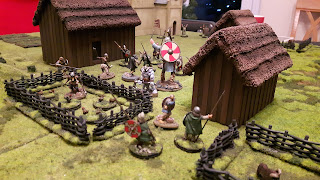 We decided the giant teddy bear...sorry... that the Grendel would appear on a randomly determined table edge.  As it did so, we didn't know if the correct response was to laugh or to begin crying... 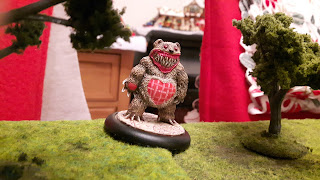 This is what lay ahead of the dread beast.  According to the rules, it moves 10" each turn and will always head in the direction of the nearest leader. 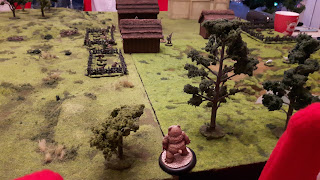 Our first movement phase seemed to remain rather civil as we spread out and began to realise we were as doomed as Aethelward's later Saga.  But then, about three-quarters of the way through the phase, the Draugr couldn't contain themselves and they began to pile in on exposed Fyrd Spearmen.  Glars Glarsson seemed to be doing a side shuffle, keeping Aethelweard between himself and the Grendel. 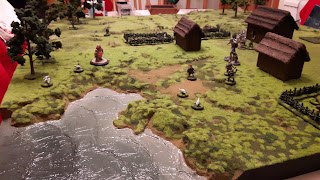 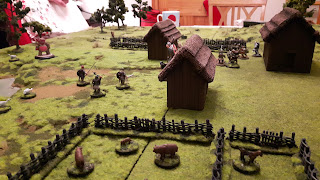 Meanwhile, the monks were deep in conversation.  And prayer.  And, well, pretty much anything other than helping their fellow Anglo-Saxons. 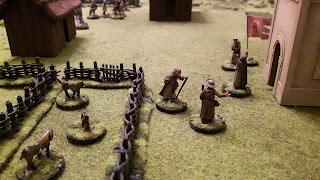 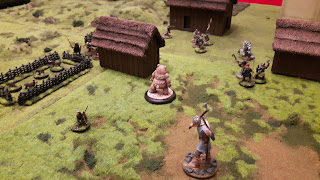 The Jotun stepped forwards, but the beast walked straight past him and a spearman towards Aethelweard who was closer to the thing by all of about a quarter of an inch.  And if you squint hard enough, you can see the feacas that has broken out by now betweeen two Draugr and a solitary spearman. 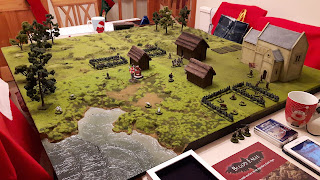 Jotun decided to redeem his earlier exploits (you know, failing to fell a monk after about ten turns and single-handedly holding up his leader and half of his force on a stone bridge by failing to injure a warrior priest).   Meanwhle Aethelweard and Eadwulf managed to dispatch Soggan. 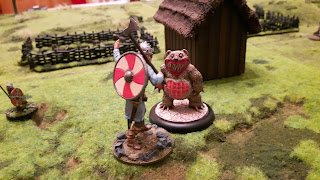 This poor Fyrd spearman had no idea what to do next... 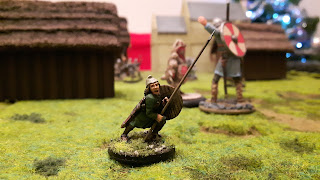 By now the sidestepping Glars had left the larger portion of his force to assault my priest.  As Ordwulf fought to hold them back, Eadwulf and Aethelweard rushed to his aid.  They hoped he could pray for a miracle and make one of their weapons become legendary.  Because apart from that and unarmed combat attacks, there was no way anyone on the table had a hope of being able to injure the Grendel.  Have I mentioned yet that the bloomin' furry beast has a Fate of 2+?

It was about this point that Ordwulf managed to roll a 1 for his attack roll.  When this happens, you have to roll again.  On a further roll of 1, the weapon is broken.  Guess who rolled a 1 then...  Sigh. Sadly in the next turn Ordwulf was slain.  Any hopes of getting a legandary weapon went right out of the window at that point. 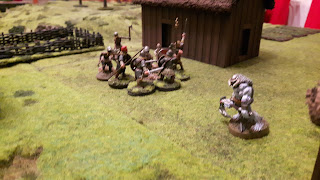 And while the Anglo-Saxons managed to injure their opponents, my diminutive Fyrd Spearmen decided to throw in his lot wth the Jotun and try and slay The Grendel. 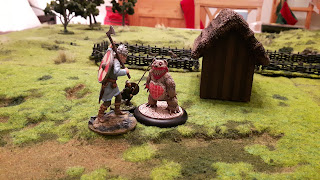 As you can see in the next photo they failed miserably and were killed for trying to do so. 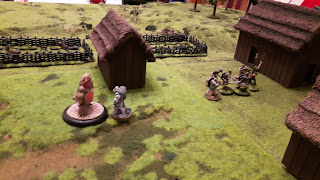 And by this point in the game, you can see how well my force was faring.  It was getting desperate. My only consolation was that the Draugr weren't doing any better.  Glars Glarsson rushed to attack The Grendel.. oh who am I kidding?  It's a scary teddy bear from Malifaux! 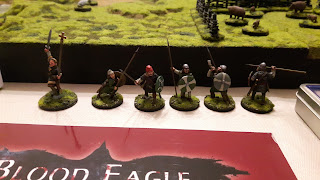 Suddenly this is all that was left on the table.  Apart from the teddy bear that is! 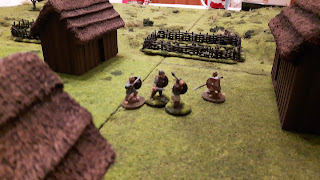 Ooh look!  Here it comes now!  Needless to say, Eadwulf killed one of the Draugr.  The teddy bear took care of the other. Suddenly the Draugr had been wiped from the table. 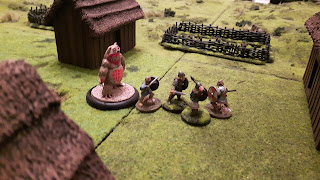 It was all over unless these two battle brothers could do what everyone else had found to be utterly impossible... 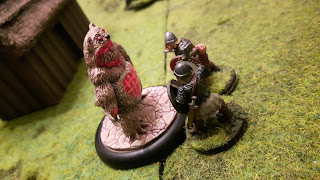 I took the choice to let Aethelweard go first.  He successfully hit the beast.  But unarmed combat meant he had no negative modifier to its Fate Roll. We rolled the die... and it came up with a 1! And that's not a word of a lie! 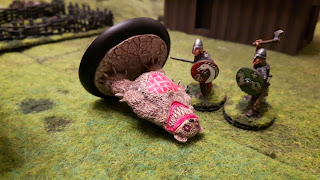 We honestly couldn't believe it.  Neither could Aethelweard and Eadwulf!

The gamed ended with the Draugr earning 7 points. In contrast, Aethelweard and his Anglo-Saxons earned 106!

Some could say the implausibility of the sudden killing of the beast rendered this account spurious.  Others may say it's because it was actually about a giant teddy bear and must therefore have been some kind of Freudian slip of cataclysmic magnitude.  All I know is I'm delighted to have had one last game with my favourite Anglo-Saxons.  For we'll be taking a break from them for a while to step forwards a thousand years into the realms of Victorian Science Fiction.  Yes, 2018 will launch with In Her Majesty's Name.  More on that in another post on this blog soon!

As always, thanks so much for stopping by!
Labels: 28mm Dark Age Wargaming Blood Eagle The Ministry of Gentlemanly Warfare